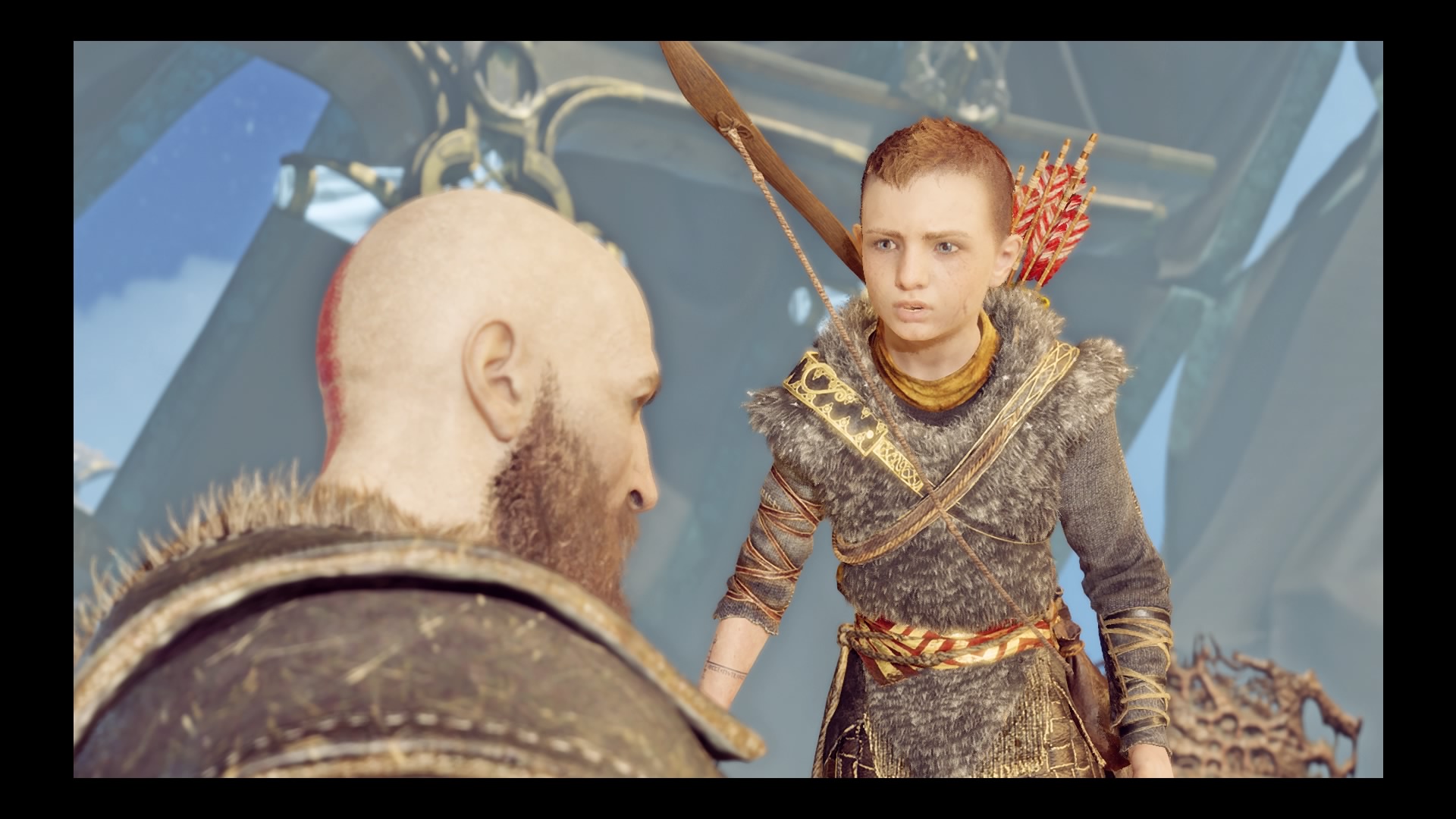 There are plenty of games I play where I can easily jump into the gameplay or story or post a few screenshots so that people can get the general gist of it. I can’t do that with God of War. For the first time in my gaming history since I was a kid, here was a game that was truly engaging from start to finish, and actually made me upset that there wasn’t more story to play through. I just finished the game – and after playing through the struggles of Kratos, I’m prepared to say that this title from Sony Santa Monica is not only one of their finest, but one of the finest games I have ever played. The gameplay is tight, the aesthetics are pure art, and the compelling story of Kratos as a man and a father, moving on from his mantle of God of War, speaks to more than just than the title’s namesake destruction. The game opens with a simple enough premise – Kratos has left Greece to start a new life and family in Midgard, and together with his son is beginning the journey to scatter his wife’s ashes from the highest peak in the realms. This feels a lot like the beginning of Journey for those of you that have played it – traveling to a high peak visible in the distance, and overcoming the trials and tribulations that will undoubtedly arise on the expedition with the help of a stranger. For Kratos however, the stranger is his son, Atreus, and the emotional journey between the two less-than-coincidentally takes place on the backdrop of Norse mythology – a land full of gods and lore new and unfamiliar to our hero.

Kratos himself has changed dramatically from the Ghost of Sparta we knew and loved from the previous games in the franchise. Having eradicated the divine inhabitants of Olympus, he has left his entire life behind for a fresh start – but to live in peace as a man, and not a God. Visibly older more grizzled, he has given up fighting for power and for glory. Instead, he fights only for survival, and tries in earnest to teach Atreus the same. This changes the tone completely from the previous games, and puts the emphasis on the journey instead of the fight. He is immersed into this new world that is the Norse realms, where everything is new and strange to him – even the language is one he does not understand. His only link to his new surroundings is Atreus, a boy bound to him by blood yet different than him in every way. One grieving his wife and the other his mother, their personality differences are clear from the start and the evolution of their connection is another peak they must climb towards as they work together on their journey. Watching this development of their relationship as father and son as the game unfolded seemed real and natural. Kratos is a man who has been used to bloody battle his entire life, and trying to connect with his son and help him become a survivor is expertly underscored by his fears of what may become of the part-god part-mortal, hoping to spare him from the eternally repeating history of the Gods.

What made this game so special to me was how much I could see myself in Kratos as the game progressed. In my own life I strove for glory and power in my youth, before I mellowed as I grew older and came to grips with that not being the most important thing. He was often conflicted showing emotion towards Atreus – often referring to him as “Boy” instead of by name, and issuing commands to him like a soldier instead of a son. He finds himself confused and struggles with expressing his emotions on their journey, which is yet another new world he must come to learn. It’s all to often the teachings of modern masculinity raise us to aspire to be Kratos in his original form that would kill everything and ask questions later, while the latest iteration of the game helps show us that the capacity for emotion and the ability to feel is not contradictory to the strength of a man. Or in this case, even a God. I loved every scene that brought Kratos and Atreus closer, sometimes even more so than the epic battle scenes dripping with magic and combat. That combat was delivered through a complete change in gameplay. Having reveled through the God of War trilogy on the PS2 (… and then again on the PS3), what I was expecting was the beautifully poetic hack and slash I knew and loved aided by a fixed camera that let me see and bring doom to everything around me. This new style had a lot more manual control, forcing the player to manually move the camera around to get the whole scope of the fight. The player is aided by a quick-180 turn shortcut button, but that still adds a degree of challenge that makes for some nail-biting encounters when Kratos’ health drops into the red. You can’t just hold the block button and not be damaged by something behind you. You want to block that? turn around. Always keeping the camera at Kratos’ point of view does do a great job though of making you feel like you’re in the battle instead of watching it, and forces you to make more careful choices. Outside of battle though, a 360 movable view does come in handy when trying to get a grasp on all of the elements around you and puzzle solving. Replacing the Blades of Chaos previously lashed to Kratos’ forearms by Ares is the Leviathan Axe, a memento from Kratos’ wife enchanted with the power of frost. With interchangeable pommels that change stats and bonuses, it can be socketed as well to provide a variety of both a light and heavy runic attacks (think standard cooldown specials). I’ll be honest I missed the Blades of Chaos when I first began playing, but the Leviathan Axe did grow on me, and quickly became my trusty damage dealer along with my shield and bare knuckles. The newest mechanic that you will rely on more than most others is that the Leviathan Axe can be thrown anywhere – at enemies, at traps, wherever – and can instantaneously fly back to Kratos’ hands on command. It only makes sense that now that you are in Norse lands, your main weapon behaves much like Thor’s hammer.

Battle tactics are greatly modified with Atreus, who on his own attacks enemies and impedes their motions, but can be commanded to fire at specific targets and execute special attacks. Having Atreus (let’s face it though, you know him better as “Boy”) adds a good bit of spice to the gameplay – commanding his shots and specials can interrupt an enemy action to buy Kratos some time to escape an attack, or even dispatch lower-level enemies, especially flyers, on his own. As the battles get more difficult in game, we’ll often hear Kratos’ praise for him grow stronger – moving from “You were adequate” to “You did well” in early to mid-game.

The father-son team really comes together to solve the tremendous number of puzzles laid out throughout the realm of Midgar and beyond. Atreus’ small size helps him squeeze through gates and wall cracks to let Kratos through to the other side, and his archery skills can open bridges and set up explosions to open up blocked pathways. Combine this with Kratos’ brute force strength and magical weaponry, and access to loot and treasures are yours. This includes using the signature Leviathan Axe as a projectile to freeze gears and locks into place and to nullify traps and hold gates open.

All of these mechanics work together cleanly and elegantly, and working through puzzles, even if it takes multiple times is 99 to 1 rewarding versus discouraging. And with a number of enhancements in the available skill trees, the ways to clear a room full of hel-walkers or take it to a boss troll trying to crush you with a large slab of stone are pretty vast. Kratos and Atreus often encounter the Dwarven smiths Brok and Sindri, who can craft and upgrade all of their weapons and armor. All of the crafted armor pieces come with vastly different stats, which can change the way you approach all of the combat in the game. Focusing on strength and vitality stats are great when your play style is to walk through battle haphazardly taking shots while you inflict massive physical damage with your main weapons. Upgrading and crafting gear with high Runic and Cooldown on the other hands lends to a play style where special runic attacks inflict the bulk of the damage over straight up fisticuffs. Socketing weapons with runes allow even further customization for stats or triggered effects. Do you want a low chance for a health burst to proc on every kill? Or do you want a static +7 to all of your stats? There are a number of decisions to be made that let you play how you’d like to play, which is a big change from the previous games in the franchise. It gives the game some replay value, since you can play through a completely different way than you did before.

Side quests, as they do in several games, unlock more rare and epic patterns for Kratos and Atreus to adorn. Gameplay aside, the game is a feast for the eyes and ears. The graphic adventure through the nine realms of Norse cosmology is beautifully scored by music by Bear McCreary. Every scene was enhanced and every emotion was heightened because of the power of the musical score from start to finish. Long crescendos during physical feats of strength to heights of strings at full volume are wonderfully contrasted by lower themes and progressions for emotional scenes between Kratos and Atreus. It just made me feel more with every scene.

So breathtaking are the graphics and vistas in the game that there’s even a Photo mode where the player can pause the game and apply filters and vignettes to the characters and their surroundings. You can even make Kratos smile! This gives the player the opportunity to permanently capture and appreciate all the sights and sounds that God of War has to offer, which in itself can be worth an entire playthrough of the game.

And in the end…

Looking at every aspect of the game – gameplay, story, graphics, sound, creativity – this is one of the greatest games that I have ever played. God of War not only delivers a masterfully crafted game, but also an experience that can evoke emotion and feelings in the player. I always most enjoy games that have a story I can buy into – and this not only delivered that but brought me along for the ride, for the rush of every battle, the awe of every environment, and the emotion of every challenge. For the first time I have to say thank you to Sony Santa Monica for this absolute jewel of a game, and without giving away spoilers am greatly looking forward to what’s next.