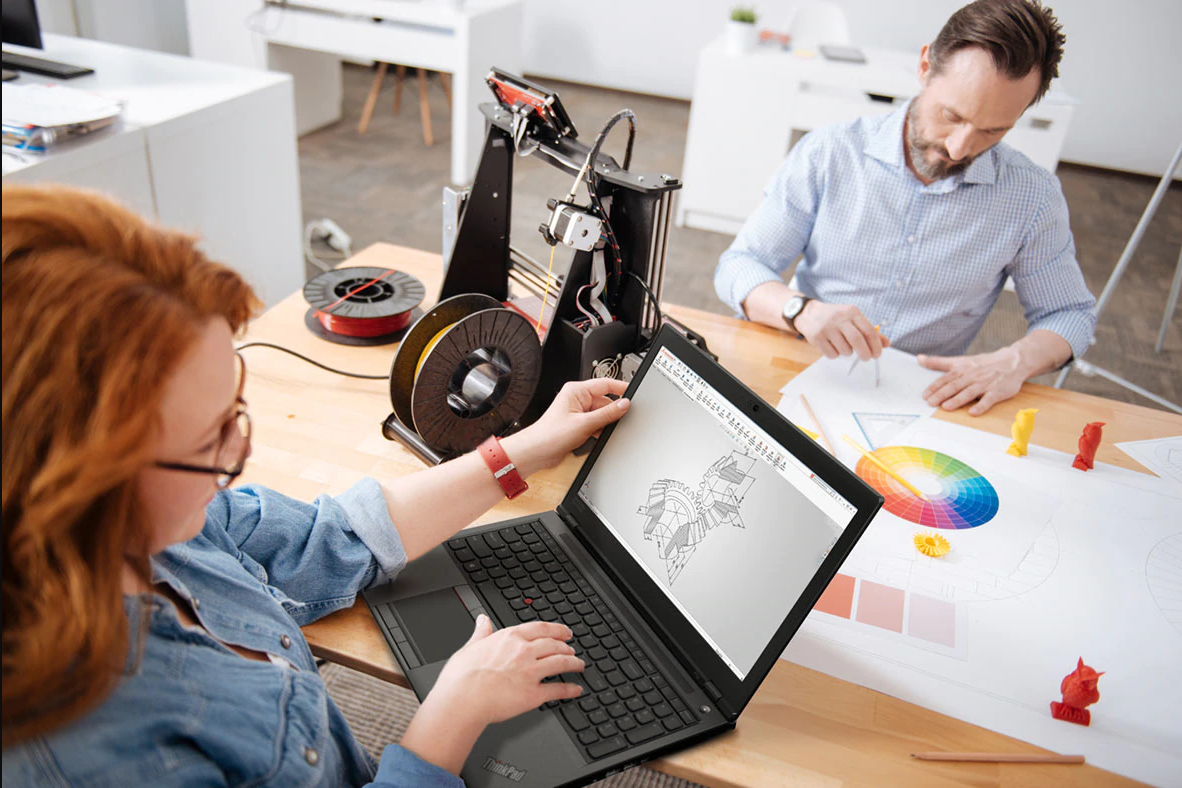 It’s true Lenovo’s P52 resembles a laptop – it’s lappable, relatively small-ish, and the built-in monitor does in fact open with a hinge. But there’s a reason they market this as a mobile workstation. Several actually. The P52 carries the power of a desktop grade workstation in a beefy laptop chassis. Let’s look at the specs of my test machine: So if the standard grade consumer ThinkPads are Tony Stark, the P52 is Iron Man. It’s bigger, heavier, faster, and has better performance. Like other laptops in the ThinkPad line, the P52 has a soft touch lid and the same kinds of features when it’s opened up, down to the little red mouse button and separated keys for the trackpad. But make no bones about it, sizewise this is about the furthest cry from the X1’s and Carbons as Lenovo has in their shop. The P52 measures in at 14.86″ x 9.93″ x 0.96″ – and this inch thick beast starts at 5.4 lbs.

The additional mass to the chassis makes the P52 feel even more durable than Lenovo’s standard construction. Opening the lid shows off two extremely quality components – the screen and the keyboard. Though the base model has a 1080p screen, my review model had the upgraded 4K multitouch screen that shines and a lovely 400 nits. And you know what? It’s spectacular. The P52 boasts 100% Adobe color gamut representation, and streaming/video visuals are a dream. As much as I abhor the very concept of “unobtanium,” Avatar looked pretty terrific in 4K on this screen. More in the real world, the Red Circle club scene from John Wick (a clip I also use for testing headset range for reviews) was absolutely glorious. The dark background and blacks contrasting with the super-bright, super-poppy neons put the exclamation point on every piece of fight and action that was going on. The keyboard is just as nice to use as the screen is to look at. In addition to being spill resistant featuring a professional-looking white LED backlight, the curved keycaps and excellent actuation make typing easy and accurate. It does also come with a full size numpad on the right, which I always appreciate. The sacrifice to get it there is shrinking the arrow keys a bit and shoving the page up / page down keys down with them, but it’s still a great typing experience.

Utility wise there are ports a plenty. The P52 has 3 USB 3.1 Gen 1’s, 2 USB 3.1 Gen 2 Type-C / Thunderbolt 3’s, an HDMI 2.0, Mini DisplayPort 1.4, and a headphone/mic combo jack. To my delight it also includes an RJ45, a 4-in-1 card reader, and an optional smart card reader. USB’s are on the sides for convenience, and the majority of the other ports plus power are in the back, which makes it convenient for users who would use this with a docking station.

Test 1: Battery for the Regular Day Working from the P52 for as long as I could on WiFi and battery power, I ran what I would normally run during the day. On the games end I played some World of Warcraft for a short while, and did as much constant internet browsing and streaming that I could. The West Wing won the decision for streaming, specifically Season 1 Episode 9 entitled “The Short List.” I even typed up part of this post. Outside of that, the majority of the time was working on a client’s website with the occasional YouTube break. This was with the screen brightness at about half through Windows control so I could get a realistic reading. The result was short as expected – I couldn’t get more than 5 hours. For the specs of the system, that’s really not that bad. If I was gaming or using this for its intended use of professional rendering, this would be plugged into the wall. This system isn’t meant for a lot of high-powered work on the go – it’s a workstation you can move. Take a look at the image here comparing Lenovo’s ThinkBook 13s (review to be up shortly) sitting on top of the P52. That’s mobility versus mobile workstation.

Test 2: Games and other graphical joysThis laptop gave me an opportunity to test something a bit unique and outside of the range of stuff I normally review. Lenovo’s Legions pack GTX cards meant for gaming, and their thinner notebooks work with Intel HD integrated graphics. But in the P52 there’s NVIDIA’s Quadro P3200. So how did this stack up on framerates and tests versus their GTX cousins?

So let’s start with the difference between GTX and Quadro cards. GTX cards are specifically designed for gaming while Quadro cards are designed for pros. They perform better with video rendering, wireframe and double sided polygon rendering that is common with CAD and design programs. There’s a lot more engineering that goes into these differences, but we’re here to look at a laptop, not discuss GPU core architecture, right? Let’s look at Shadow of the Tomb Raider. While the P52 does have a brilliant 4K display, running SotTR at 4K only nets an average framerate of 21fps. Dropping the resolution down to 1080p and keeping the settings at high that doubles to about 40fps. Remember that’s the average. This is actually a better framerate than the ThinkPad X1 Extreme with it’s GTX 1050Ti GB, which did an average of 31fps on the same game.

But be warned, if you’re using this on your lap during this, it’s gonna get hot.

World of Warcraft gave me a couple of surprises. Not only did the Quadro card perform as well as if not better than the top end GTX and RTX cards, but the world loaded immediately. Most of the machines take at least a couple of seconds to render all of the models, especially zoning into areas like Boralus Harbor and Dalaran where there’s a ton of active user activity. The P52 loaded the worlds in full before I could even get out of my chair to get a drink. With a card that is tuned for rendering and wireframes, WoW in my opinion is definitely a game that would benefit from a Quadro over a GTX. The performace was perfect and smooth, and the colors on this display looked wonderful. Go ahead and click on that screenshot to blow up the detail. It’s better live. So can you game on this thing? Absolutely. Games like WoW that don’t require photorealistic graphics at high framerates benefit from the Quadro, where the sheer number of models on screen at once can be rendered in real time. However with the on average higher cost of the P52 and other machines using Quadro cards may not be worth it for a lot of gamers.

Outside of gaming, where the P52 showed its prowess was using professional applications. As a multiclasser myself, Steam and Battle.net are accompanied by Adobe and Autodesk applications on my rigs. The rendering power of the machine was evident using Recap Pro and AutoCAD. Loading a point cloud file generated from a Leica BLK360 camera was close to instant to render, and attaching that point cloud to an AutoCAD drawing was just as fast – quicker than it would using a machine packing a GTX. So for pros that use CAD as part of their everyday tasks, this machine will more than work for you, especially with the ability to support 4 monitors. So as we said at the top, this isn’t really a laptop, it’s a mobile workstation. The specs of the machine are definitely geared more towards the office pro who places premiums on rendering power and security over framerate and gaming performance. With its brilliant 4K screen and Quadro P3200, the P52 is ISV certified for Autodesk, AVID, Bentley, Dassault, PTC and Siemens, and also supports the TPM 2.0 platform and fingerprint scanner for security. As an extra measure, the P52 has been through MIL-STD-810G mlitary spec testing.

And it can definitely entertain – so after spending the day throwing together architectural drawings, you can use the same machine to get in some downtime. It might not push the framerates you’d get with top end GTX and RTX cards, but as a secondary purpose for a machine, it doesn’t do too shabby.

There is definitely a battery sacrifice for upgrading the 1080p display to 4K, and a further sacrifice if the i7 is upgraded to the available Xeon processor. There’s also a cost associated, as the Xeon/4K models with maxed memory can hit the $5,000 mark. But again, this is a mobile workstation – damn near a server with the Xeon option, and is specced for power.

With the P53 out using Intel’s 9th generation i7’s and i9’s, the P52’s are almost cut by half in price right now at Lenovo. This will let you get a lot of power at the moment without breaking budget.

Final Verdict on the P52? A solid mobile workstations for professionals with a strong side of gaming. You can take a look at available models (currently on HUGE sale starting at $1189) here.

August 9, 2019
Our Review Process
Latest Reviews
Where to?