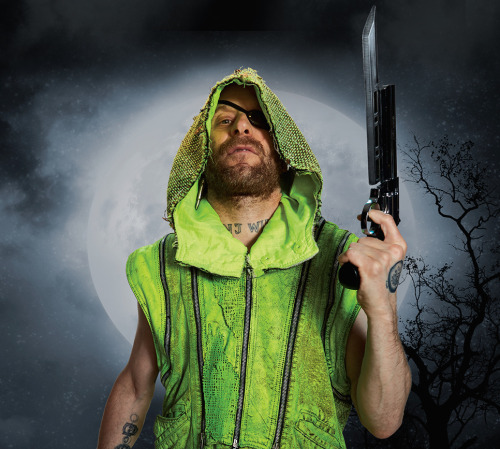 Imagine, if you will, a small peaceful town in Vermont, land of the Bed & Breakfast. Now mash it up with werewolves and a neon-clad savior intent on stopping them. Now envision that whole strange and twisted scenario in the hands of Adult Swim. That is Neon Joe, Werewolf Hunter, and it’s coming soon to a television near you.

This past week at New York Comic Con I got the chance to talk to some of the folks that are a part of this project to see more on what this show is all about. The show stars Jon Glaser (you know him from Parks and Recreation, Girls, and Delocated) as the titular Neon Joe, who makes it his life’s work to battle lycanthropy in this tiny B&B-laden Vermont town. Also featured are Scott Adsit(30 Rock, Big Hero 6) as a colorful local who wants to be Joe’s BFF and Stephanie March (Law & Order: SVU) who plays, in her words, the “randy lesbian mayor” of the town.
The show was recorded as “the craziest miniseries of all time,” being chunked into five 30 minute episodes with a continuous storyline, which is a bit of a departure from the deliciously random 15 minute episodes on Adult Swim that we’re used to enjoying. “It’s just like Roots,” Adsit joked about the miniseries format. “With werewolves, definitely no vampires, we can be very specific about that” March added.
But the real fun is how the show even came to be in the first place.
“I was on Jimmy Fallon’s show I think it was 3 years ago maybe to promote the finale of Delocated, another show I made for Adult Swim,” said star and creator Jon Glaser. “And I wanted to do something just dumb to amuse myself for the segment and not have a straight interview, so I took the two articles of clothing that I own and that I use for live comedy shows in New York, one of which was a neon yellow hoodie and a knit cap from American Apparel and another of which was a pair of Coors Light sweatpants. And I just paired them arbitrarily and went on the show and I just said ‘I’m really sad Delocated is over but I’m really excited about my new project it’s called Neon Joe,Werewolf Hunter and I’m dressed as the character right now. And that’s really all we have right now but we’re excited to kind of figure out the rest.’ And that was 100% made up, it was a fake idea. It was not a real idea for a TV show I had, and I kinda thought at the time I could see Adult Swim knowing it’s a joke and saying it still sounds funny, could that be a show? And I said sure, and that’s what happened. So we had a meeting and they said why don’t you write a pilot and see if it’s something.”

Yes kids. This show was born from an arbitrary joke Jon Glaser made to Jimmy Fallon. That joke became a meeting, that meeting led to a character, and now we’ll be able to see the final product on Adult Swim.

That one joke and idea with a crazy set of characters was enough to draw a great cast of actors for the project, all of whom were trying pretty hard to tell us things without really telling us too much of the plot. Within a twenty minute timeframe, the show was described as being an epic miniseries with tones of Don Quixote and a little bit of Batman. “I would say it’s about our hero’s epic journey to himself. To return to himself as we follow his plights and his struggles” was what Stephanie March could tell us about the character of Neon Joe. As for the plot, “By the end you will know definitively whether there’s werewolves in this universe or not” from Scott Adsit.
That comment later on sparked a bit of hilarious tension between Glaser and Adsit to the delight of everyone at the table.

“It’s Glaser sensibilities,” Adsit said about the show’s humor, “and Glaser is a brilliant original voice in comedy as far as I can see. Everything filters through him and he’s so incredibly funny in this role he’s created for himself. It’s really really a pleasure just to be on the set and watch him work through this script that’s really funny, and he’s really good at it.”

I also got to speak with Steve Cirbus (Delocated, Gotham) and Steve Little (The Heart She Holler, Adventure Time, Eastbound and Down), who play the town’s sheriff and janitor. The sheriff has almost a buddy cop relation with Neon Joe, with Cirbus agreeing with me (one sec while I praise my own ballerdom) that their relationship is akin to Commissioner Gordon and Batman. Steve Little had his own fun story on why he joined the cast:
“I had a good time on The Heart, She Holler, then I got an email about this and then I forwarded it to my manager because sometimes like you get something called Neon Joe, Werewolf Hunter and you don’t know how to even process that. And then my manager was like ‘Oh! I love this!’ – you know, a testament to her.” He’d never worked with Glaser before so he wanted a second opinion, watched Delocated and jumped in.
Do yourselves a favor and watch this amazing trailer from Adult Swim:
Neon Joe, Werewolf Hunter starts on December 7 and will play one episode per night through the 11th at midnight. Seeing a cast that has this much fun together with a plot as wonderfully twisted as this is, I can’t wait to start watching.

October 14, 2015
Our Review Process
Latest Reviews
Where to?