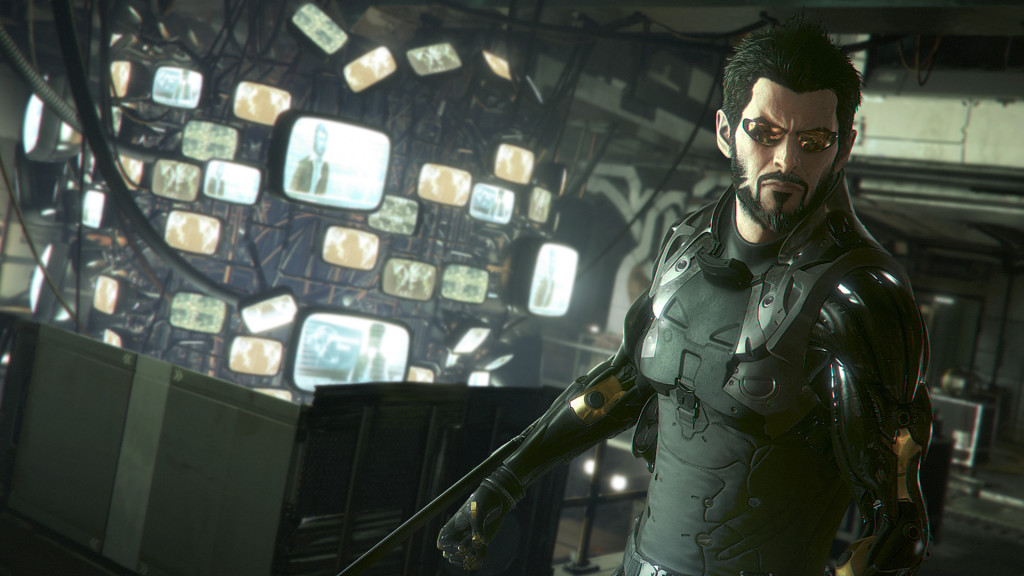 Last week at New York Comic Con, Square-Enix was one of the major gaming presences in the city. Among the previews and demos they offered was the upcoming Deus Ex: Mankind Divided. Mankind Divided picks up where the story left off, with our favorite augmented human Adam Jensen rocking a few new upgrades from past titles in the series. I will say this – the game looks really good, and adds a new formula for gameplay that makes this the most attractive entry into the series yet.
Eidos Montreal has the player reprise the role of Jensen, following the Aug Incident of 2027, when a malicious signal broadcast by Hugh Darrow to all augmented humans caused them to glitch and go insane, forcing them to violently attack anyone around them. After the death of millions, augmented humans (Augs) are viewed worldwide as a threat to humanity, forcing Augs underground into slums and squalor, while Aug manufacturers shut down around them. This environment – that of repressed Augs in a Apartheid-style world of forced segregation – is where the game begins.
Jensen is still working as a covert operative, whose job it is to help find the people responsible for the events of Deus Ex: Human Revolution. While the series has been known to offer players some choice in gameplay, the options in the new title go beyond that, giving the player complete control over how they want Jensen to act, and thus augmenting how the story unfolds.With his various new upgrades, Jensen can be played a number of different ways. As this is a Deus Ex game, the combat option is there, allowing the player to progress through the game through running, gunning, and dispatching their foes with extreme prejudice. There’s also a non-lethal option, giving players the opportunity to progress through levels without killing – for example choosing to knock someone out with a takedown after sneaking up on them instead of a ferocious aug-based attack. Also available is the ability to stealth through  the entire game, forgoing violence altogether and focusing instead on not being seen. This might be a great plus for gamers who love stealth games like Thief Assassin’s Creed.

Of course, then there’s the tech! Jensen’s new upgrades would make any IT department on earth jealous (mine included). New skills include the Icarus Dash and Icarus Ram, some of the skills that are helpful in a non-lethal play option. The coolest upgrade, in my opinion, is the Titan Shield. This baller-as-hell aug upgrade lets Jensen encase himself in a sweet shield, rendering him impervious to damage as he handles business. Also visually probably one of the most satisfying things from the demos.
Mankind Divided also provides an upgraded hacking system as well as smart vision, allowing Jensen to see loot that would normally not be seen by the player’s naked eyes.
But there’s a bit more to it than that. Even though this was a big demo at NYCC, I recall a conversation I had with Stéphane Roy, Executive Producer on the project back at E3 this summer about some major themes in the game. I asked him about some of the details of this separatist society portrayed in the game evoking player emotions, and whether or not there was any social commentary involved in that aspect. His response:
“It’s complex. It’s complex because we work on that type of details for guys like you, you know? We want to make sure that if you play and pay attention you will notice all these small things and you’re going to start really being in this universe. Nothing is black and white in real life so we want to make sure that the subtleties are around you and you truly believe in this. So it’s a lot of work for us because if we decide to change something here there are ripple effects and it could mean that we have to change something in this mission by changing something here. So it’s demanding for the team, but at the same time at the end when everything is like this, I really want to suck you into the story and you’re trapped. And to be able to do that, we have to have this kind of details.”

He went on with some more commentary on choice in games:
“We want to make sure that choices and consequences are really important. I want to make sure when you’re faced with choice, it won’t be easy. ‘What should I do? Who am I? What are my values?’ So like you just said because you saw this guy and think it’s unfair, when it will be time to make a decision, I guarantee it’s going to affect your judgement, and I think this is where the richness of the product will flourish. You can see it.”
Mankind Divided so far looks like way more than than just a shooter or an action game. Eidos Montreal has really used the medium to try to deliver something that’s more than pure basic fun. Want to see what we did at the last couple of shows? Check out the gameplay trailer below complete with commentary.

October 24, 2015
Our Review Process
Latest Reviews
Where to?