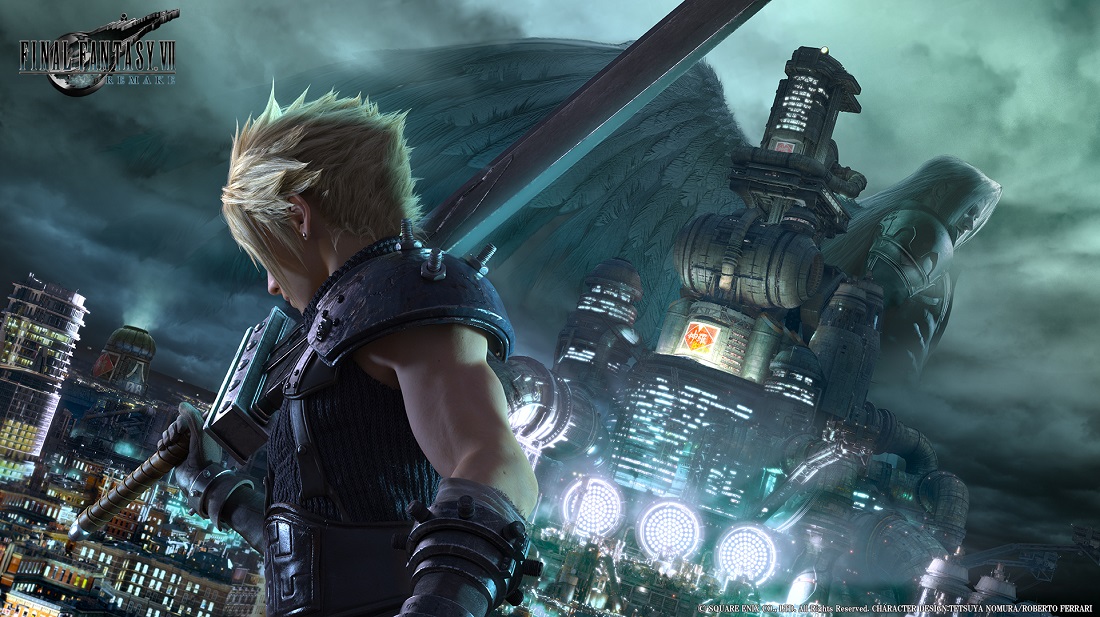 Before we continue let’s make one thing clear.

Final Fantasy VII was one of my favorite entries into the series, and I spent far too much time my freshman year of college playing it instead of studying power systems and tidying up my circuits lab notebooks. It was the first Final Fantasy to utilize PlayStation’s 32-bit graphics, allowing a depth of storytelling and visuals previously unavailable in gaming. A few years ago I was at the PlayStation press conference at E3 when they formally announced the remake, during which I summarily lost my mind.

So now, through that press conference, and through the absolute tease using the FFVII intro to demo the PS3 engine (oh we’ll get to that), it is time. And that time is March 3, 2020. This was clearly one of the biggest draws in Seattle a couple of weeks ago at PAX West – in my opinion more than Cyberpunk 2077, more than Borderlands 3, more than basically anything else going on. There were tickets for timeslotted gameplay demos for the masses, and I have to say, the crowning touch on the whole experience were spot-on actors playing Turks trying to shake down folks waiting to play for information on AVALANCHE.

Seriously, Square-Enix. Expertly done. I was pulled aside because let’s face it, by my smooth style of dress it’s clear I’m a baller on sight, and I’m holding you to the free month of Mako energy I was promised for information on Tifa’s 7th Heaven bar.

Outside of the great fan interaction, photos were all but prohibited in the entire booth and demo area, which was constructed as a Mako reactor tour. And after a mission briefing from Jessie, we were ushered into the demo area to play. The demo content? Mako Reactor #1 in which Cloud and Barrett take on the Guard Scorpion, and a sit down with Neal Pabon, Square-Enix Senior Product Marketing Manager for North America for all things Final Fantasy VII Remake.

So the short take? It was excellent. Instead of the classic style we know with random encounters and turn-based fights, we were treated to something far more dynamic. As Cloud on the map you could actively slash/open boxes for loot, and even just a taste of the movement was splendid. Borrowing a couple of things from games like NieR: Automata, being able to run and slide down long ladders was a welcome addition to those who played the original back in the day – especially in the Mako Reactor maps.

The biggest change however was in the combat. And it was marvelous.

The game played a bit more like Final Fantasy XV (at bare minimum like X forward) in the sense that it replaces turn-based tactics with active time battles. Limit breaks work the same way – eventually you take enough damage and you can dole out some special revenge pain. Registering basic attacks and hack-n-slash combos (or auto-fire with Barrett) fills up ATB gauges, which are required to execute a special attack, cast magic if you have materia equipped, or to take a potion. Taking potions outside of battle does not have special requirements, putting focus on healing up between battles as highly important. The most major change was tactical mode – during battle the player can pause the action and take it into super slow-mo bullet time, switching between characters to issue commands and give battle a far more commanding feel. For example, entering the tactical menu allowed me to order Barrett to throw lightning at the Scorpion, while manually slashing the hell out him with Cloud to fill enough ATB to hit it in the face with Braver. You can map hotkeys for spells and potions if you want it to play more like an action game, but I loved the new tactical aspect in a familiar setting. One of S-E’s goals for this remake was to deliver a new, fresh, and modern game experience.

“We really are putting the power of choice into the hands of players,” says Neal on variable play styles. “So if the players want a total action based experience they can do that – Cloud attacks, dodges, blocks in real time. You can set shortcuts and hotkeys for your abilities, spells and items so you don’t even have to go into tactical mode – just keep the action fast paced and dynamic and keep everything flowing super quick.” On the other side of the coin he went on, “BUT – if you do want to be more strategic, you do want to slow things down so you can make those command-based decisions, you can absolutely do that in tactical mode.”

Don’t overlook how important this is – there are a lot of RPG’s out there that didn’t utilize turn-based tactics for the combat portions of their games, and this kind of command scheme will open up the FFVII universe to fans of games like the Mass Effect, Dragon Age, and Star Ocean series who may not have given this game a look before – or frankly, were just too young at the time to see it. And Square-Enix seems to have loaded that in as part of their development strategy. Says Neal, “I think that touches on one of our big goals with Final Fantasy VII Remake – we want to give the fans everything they’ve ever dreamed of, ever since that tech demo on the PS3. We also want to be welcoming to newcomers and make them feel that this is for them as well. You know, we are absolutely delivering what fans have been asking for, but at the same time, we’re reintroducing the story. We’re reintroducing the characters. We’re adjusting the gameplay mechanics so that it appeals to lots of different types of players, and so we want to just, bring everyone into it, whether you are the biggest Final Fantasy VII fan ever, of if you’ve never touched Final Fantasy VII, or if you’ve never even played *any* Final Fantasy game. This is just a perfect starting point.”

On that score, I definitely have some people in mind to make believers out of. On story, the remake is confirmed to focus on Midgar, and all of the surrounding lore for both the city and the characters. That’s the kind of remake I’m excited to see – As Neal and I mentioned *many* times, the original is 22 years old, and a shot-for-shot remake would honestly not be that exciting. Bandai Namco did something similar with Soul Calibur 6, and while it’s a complete apples to oranges comparison, there is always great content consistently left on the cutting room floor that can now come to light thanks to the massive advances in game console storage. “That’s one of the big parts of Final Fantasy VII Remake,” said Neal. “Not just retelling what came before, but expanding on that and going deeper. So we’ll learn more about the characters’ backstories, we’ll see more of Midgar, and we’re even going to see some surprises that even our biggest fans aren’t expecting.”

And they have to. Two decades later things have to stay fresh.

As to the rumors that the remake would be an episodic title, Neal had some clarification on the matter – “So we avoid using the word ‘episodic.’ I think that makes people think that we’re not releasing a standalone title. And I can absolutely confirm that Final Fantasy Remake, the version that comes out on March 3, 2020, is a fully standalone title. It is comparable in length to other main line Final Fantasy games, so it is a full fledged Final Fantasy game. And it’s on 2 blu-ray discs – just that first release that comes out on March 3, 2020. So it focuses on the story of Midgar.” This title will retell the story of Midgar up through the party escaping the city. And that portion of the original will take up two blu-ray discs, when the complete original game on PlayStation was 4 discs start to finish. That should speak to how much fleshing out and lore expansion we can expect in March. “I’m sure you can extrapolate based on where that story is, and what sort of things will be included. We do have some surprises for you, but you can kinda gauge what you can expect on March 3.”

But what is it about the Final Fantasy VII universe that makes fans want more? The compilation of that universe is already massive with multiple titles over multiple media – Dirge of Cerberus, Before Crisis, Crisis Core, Advent Children, and Last Order. Midgar was heavily fleshed out, but fans still wanted more. There wasn’t the same clamor for the world of Spira in Final Fantasy X/X-2 – maybe because the big bad was truly done at the end of the first one? Final Fantasy XIII was the only series that has come close as part of Fabula Nova Crystalis. Neal credits the story, character, and let’s not forget, the technology on initial release: “So when we look all the way back to 1997, and at that time I was still a gaming fan looking at the marketing going like ‘Wow! I didn’t know games could look this good!’ And I think at that time, that’s what started getting people’s attention – this cinematic experience that you could experience on a console. BUT, graphics age. You look at the graphics now and obviously, it’s nowhere near where games are at today, but the lasting power was in the story and the characters. Once people got that and they started learning more about Cloud, Barrett, Aerith, Tifa, the whole party, they started learning about Midgar, Shinra, Sephiroth, Jenova, and all of these different elements and how they fit together, and all these different characters’ backstories. When you first meet Barrett he’s this, you know, very gruff kind of guy but you learn more about him and he’s really just a softy at heart. And Cloud obviously has a very rich backstory with a lot of turmoil in his past. And yeah, just the story, the characters – the characters become some of the most iconic in gaming. They’ve stuck with me for over 22 years and I know they’ve stuck with so many of our fans out there. People want to know more about the story and characters so we fleshed that out through the compilation of Final Fantasy VII – like you mentioned, Dirge of Cerberus, Advent Children the sequel story to Final Fantasy VII, and one of the most exciting things about Final Fantasy VII Remake is the chance to dive back in to the beginning, but go even deeper and expand.”

Unfortunately, the rest of my conversation with Neal has to be redacted as not to spoil those unfamiliar with the lore. Suffice it to say it involved a scene that was sad enough to make both of us cry the first time we saw it.

At any rate, Final Fantasy VII Remake is available for pre-order now for PS4, and we’ll have more detail on Technical Fowl as March 2020 approaches. In the meantime, enjoy the current trailer from TGS 2019, where a “Classic mode” has been teased for those who want the old style of play.

September 16, 2019
Our Review Process
Latest Reviews
Where to?