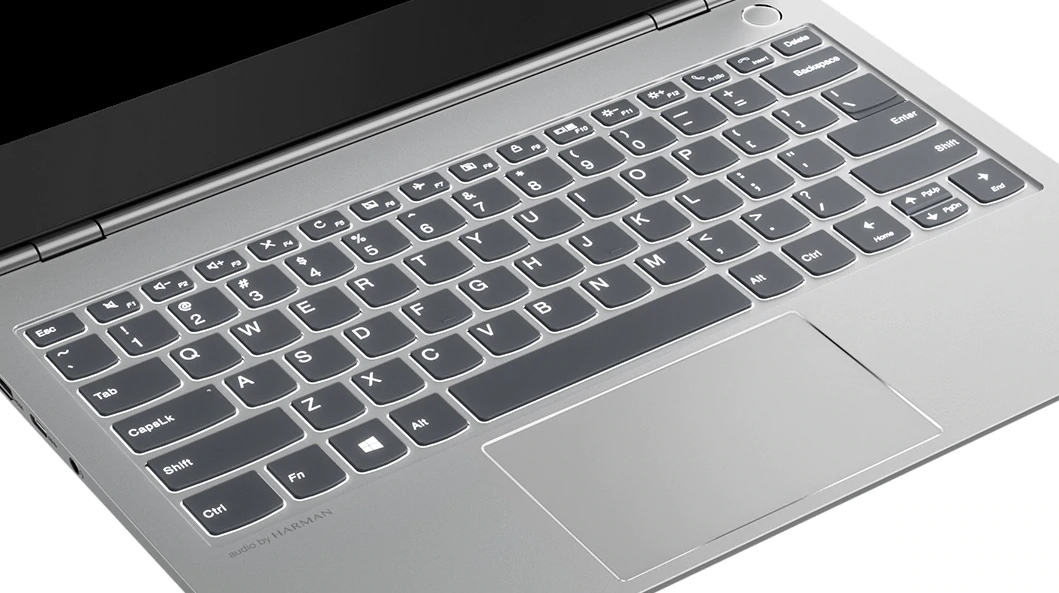 Battery life will last all day

As you kids know by now we love having machines of all sorts here at Technical Fowl – and what we have here in the ThinkBook 13s is a lightweight business traveler. Kind of the anti-gaming laptop, but we definitely got it to run a few favorites. Before we begin, the specs of the review model:

That’s this laptop in a nutshell. At 0.63″ thick and under 3 lbs, the ThinkBook 13s is easy to tote around on its own in a sleeve or to tuck into a day bag or briefcase for any sort of travel without adding weight. It also runs on a small 65W adapter that doesn’t take up much space either.

Opening it up brings us to a white LED backlit keyboard, and while not quite as nice as Lenovo’s full-scale ThinkPads, it still responds and types very well and accurately. As this is targeted for the business traveler, there’s also some helpful quick keys for answering and placing Skype calls, whether it’s from the road or in the boardroom. Up top there’s a webcam with privacy slider thankfully above the screen, as well as a fingerprint reader integrated into the power button. The thin bezels also give you as much real estate as a 13.3″ notebook can provide, as well as the ability to lay 180 degrees flat.

That screen is pretty sharp, too. The 300 nits screen delivers great picture quality, so streaming Netflix or thumbing through YouTube videos is pretty enjoyable. Harman speakers on the bottom of the laptop pumps out sound nice and loud. Not a lot of bass because let’s face it, there’s really no room in here for a subwoofer of any kind, but at full volume there is barely marginal clipping at the high end of the register, which is pretty impressive.

On ports there are understandably fewer than we see on Lenovo’s ThinkPads and Legions for the sake of weight and size, but there’s still plenty to work with. Most importantly a full size HDMI port for presentations or piping media out to your hotel TV without additional adapters. There are 2 USB 3.1 ports and a USB-C in addition to the standard mic/headphone combo jack. I feel like there’s room for a card reader or an additional Thunderbolt port but we do have to consider price and weight. Just in the image here take a look at the ThinkBook 13s compared to Lenovo’s Y700 – which runs just bigger than their recent Legion Y545.

While a lot of the connections for a mobile life could presumably be made over bluetooth and wireless, this system nearly delivered everything I need as an IT pro – sometimes having an RJ45 for ethernet makes things loads easier, but it makes sense for a superlight and super portable machine to make those sacrifices. That doesn’t mean I wasn’t able to use it well, though.

This one was very easy to make my work machine for the day. I didn’t even need my bag or an additional sleeve – the 13s was slim and small enough to fit into my leather notebook, not much larger than the 8.5″x11″ notepad inside. Running from site to site and operating off of wifi for a few hours I came home to relax, streaming some Downton Abbey to my living room TV (yeah that’s right, Lord Grantham’s a damn gangster and I will go to war for John and Anna Bates) and playing a bit of Diablo III (which I’ll get to shortly).

With some additional email and boring work in Microsoft Office, the battery was still going strong 8 hours in, so I shut it down to continue later. Turning it on the next morning I was able to squeeze out another 2, giving me about 10 hours of time before I needed to charge it up again. The best part was the speed in which it charged back up again, going from near zero back up to over 90% in under 2 hours. OK. The ThinkBook 13s is not a Legion. And it’s not anything from the X1 line. I would call it something like a ThinkPad junior – but that doesn’t make it a dull boy through all work and no play. And before we get to the graphics, let me tell you this – it is 100x easier to pull this out on an airplane and use it on the seatback tray, as opposed to a 15″ Legion which would take up the whole space and annoy your seat neighbor to boot.

There’s no NVIDIA card in here to really get into framerates and crazy load times. Instead, for both portability as well as battery life, as well as lack of need for a business traveler, we’re working with an integrated Intel UHD 620. Sure, you’re not going to be playing Shadow of the Tomb Raider and the recently released Borderlands 3 isn’t going to give you any joy on this unit, but there are plenty of fun games this can still run while you’re on the go.

With the UHD 620 I put my hopes in Diablo III. It’s a game that can work and still be enjoyable without the graphics and resolution turned all the way up. I turned the resolution down to 1366×768 at 60fps (still 16:9 widescreen) and activated the “Low FX” switch in the graphics options. This gave me decent gameplay without any sort of performance issues – without quite the graphic sink one would expect. Much of Blizzard’s library was in fact able to be played with settings turned down on the 13s – Overwatch and Hearthstone were also able to run without too much of a problem.

Granted my Steam library fared a bit differently – classic games of course ran fine, but newer games wouldn’t go without at least some sort of dedicated GPU. However, that by no means says that there’s no fun while traveling. Games at the graphical level of Left 4 Dead 2 ran flawlessly, so you can still get some gaming on between meetings.

Other games running with no issue: Rocket League, Cube Escape games, much of LucasArts’ Star Wars collection, and a lot of the indie games you may have.

Now let’s be clear – if you do have another steam machine nearby, this will stream beautifully. I was able to log into Steam and stream Shadow of the Tomb Raider, the Life is Strange collection, and a lot of more recent games without flaw from the tower in my office.

So you definitely have some options.

Lenovo’s ThinkBook 13s is an ideal machine for the business traveler on points of portability and specs. The review model I had which featured an i5 and 256GB SSD retails for $1,189 at Lenovo, but is currently on sale for just over $700. Even amping up the specs to an 8th generation i7 with 16GB memory and a 512GB SSD is on sale for $989 (down from $1,649).

Bottom line, if you need a computer to handle all of your day to day with battery life that will last your entire shift, the 13s is a solid buy, especially with the current sale going on

Final Verdict on the ThinkBook 13s? Even with the cons on the list above this is a solid machine that will handle most of what you need, even on the road. This system works as a business traveler as well as a productivity machine at home or in the office. The lack of a dedicated video card curtails a lot of gaming on the 13s, but it wasn’t made for gaming so I can’t hold that against it in the ratings. The current sale at Lenovo makes this an excellent buy right now if you’re in the market.

September 14, 2019
Our Review Process
Latest Reviews
Where to?