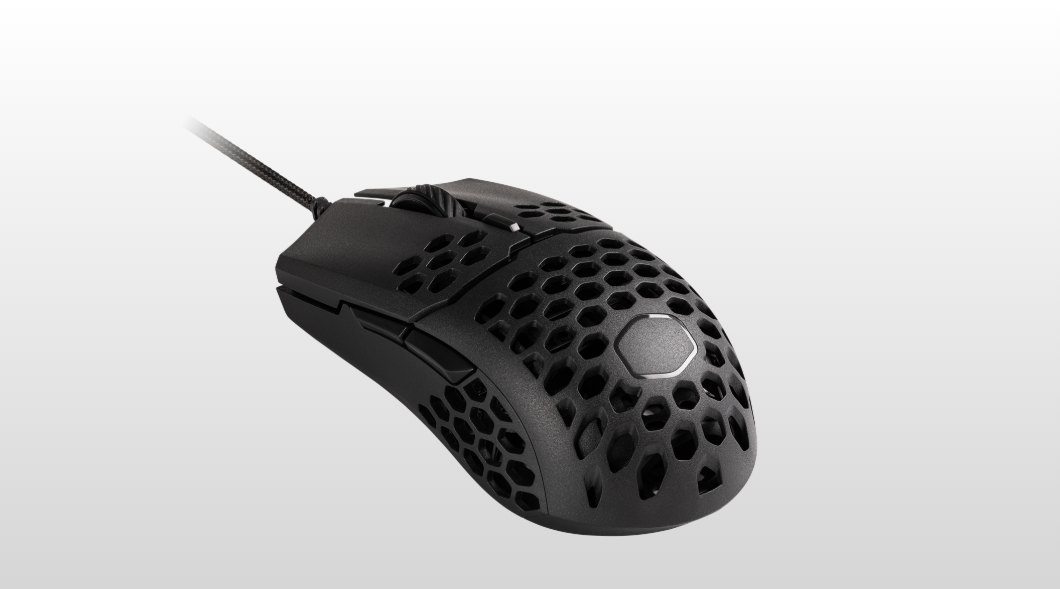 Maybe not the best choice for large hands or palm grippers

As the saying goes, good things come in small packages. And Cooler Master decided to illustrate this with their MM710 gaming mouse. I use their MM830 as my mouse of choice on my primary desktop (you can check that one out here), and this one was a bit of a change. The MM710 offers a high grade sensor and smooth movement without the flash of many other gaming mice out there.

The MM710 is retailing right now at $49.99 on Amazon and Cooler Master’s online store, and positioned to literally give gamers more with less. Here’s a summary before we dig in with the review: At first glance the MM710 doesn’t look to be a gaming mouse – no stereotypical aggressive shape, no RGB lighting, and well… it’s full of holes. But pick it up and you’ll quickly find the method behind the madness. This mouse is one of the lightest gaming mice – actually scratch that – lightest mice at all, that I’ve ever used. The Cooler-Master-logo-shaped hexagonal cutouts running over most of the device and the lighter weight cable cut the weight of the MM710 down to a scant 53 grams. Fifty three. That’s just slightly over 10 American nickels. For comparison, their flagship MM830 weighs in at 122g on its own, and 162g when you add the cable to that. Another weight cutting measure was foregoing rubber surfaces for full plastic construction, with a nice matte finish with contrasting gloss for the thumb buttons and DPI selector. It’s naturally smaller than the majority of gaming mice too, but that doesn’t mean it’s too small. As you can see from the comparison photo with the MM830, “smaller” may just mean “regular size,” as its dimensions are pretty bang on with the previous generation’s MasterMouse S. It’s by no means tiny, like I imagine travel mice to be, and may only seem that way if you are a large-handed individual. Based on that this is going more suited to gamers that use more of a “claw” or “fingertip” grip over players that use their whole palms. I would say I have slightly smaller than average hands, and it worked out for me just fine.

The MM710 fits right in with most of Cooler Master’s ecosystem with their MasterPlus software, which allows up to five profiles to save custom DPI and performance settings as well programming macros. Outside of the OLED and RGB zones, I had just as much control over the performance of this mouse as I did the MM830, with every button being programmable. There’s a mouse combo feature that also lets you lock in a second set of button mappings. You can set 7 DPI presets that default from 400 to 8,500, with the full range going from 100 all the way up to 16,000 (that’s 16,000 optical – if you’re insane you can go up to 32,000 interpolated). The 7 settings are customizable, and able to be cycled through using the DPI selector button under the mouse wheel. There’s also control for angle snapping and liftoff distance for folks who get a bit more physical with their gaming.

The holes in the mouse, whether intentional or not, serve to provide airflow while you’re zipping around your gaming surface, actually allowing me to play longer sessions without having to dry off a sweaty palm. Actually without having to stretch my wrist out too. Seriously, this is less than half the weight of my everyday gaming mouse, and while a 50g difference may not seem like a lot, get on your rig and play for a couple hours. You’ll be able to tell. The mouse feet also give it great slide – just make sure you take off the near-invisible plastic stickers on them before you get going.

And for those worrying that the exposed innards would get damaged due to sweat or dust, the PCB is sprayed with a special coating to prevent that. So that makes it resistant, but not waterproof. So don’t go gaming in your pool – the encoder and the physical switches won’t exactly respond well to that.

It travels well too – on my pro side, the MM710 spent some time in my computer bag going on site visits for repairs and setups. The lack

How does it game?

So let’s get down to the nitty gritty. The MM710 uses PixArt’s PMW 3389 sensor, which on its own is fantastic. When used with a mouse that has its weight cut down to 53g, it doesn’t lag, and I tried, I really did, but failed to make it stutter on my standard issue gaming surface. The tracking is flawless for the full optical DPI range. And clicking has a great tactile feel with their Omron switches, which are rated for 20 million clicks. So in Overwatch testing, high DPI with ultra low weight let me turn super quick with not much more than a faint flick of my wrist, and I, as well as those behind me and Reinhardt’s shield saw benefit from this ability. Being able to drop it down to low DPI to line up shots with Hanzo also made things scores easier for headshots. My only issue, and this is pretty minor, is that the DPI selector is stuck at 7 levels. If I could customize it a bit further to only have maybe two or three, it would be easier to cycle through to the DPI setting I wanted without guesswork. 1600dpi or level 4 is my default mouse use, but level 1 at 400dpi is sometimes the switch to make when zoomed in through a scope.

For testing macros and key bindings we hopped over to World of Warcraft. WoW’s key bindings worked very simply, giving me two additional controls on the mouse that were just annoying to have to use my action bars for. No issue pulling quick 180’s, no sensor issues, and even when I had to go cross-screen to click things, the high DPI got me there in a hurry.

No frills, all thrills.

The MM710 provides big performance in a small package. Premium Omron switches and a so-far flawless PMW3389 sensor in a 53g casing that travels well makes this a premium grade gaming product. What makes it even more attractive is the $49.99 price point. Just the pure bang for your buck factor really makes this a solid buy – from something as dull as office work to a stroll through King’s Row. For the price point and the performance you get, I must say, well done, Cooler Master.

September 26, 2019
Our Review Process
Latest Reviews
Where to?