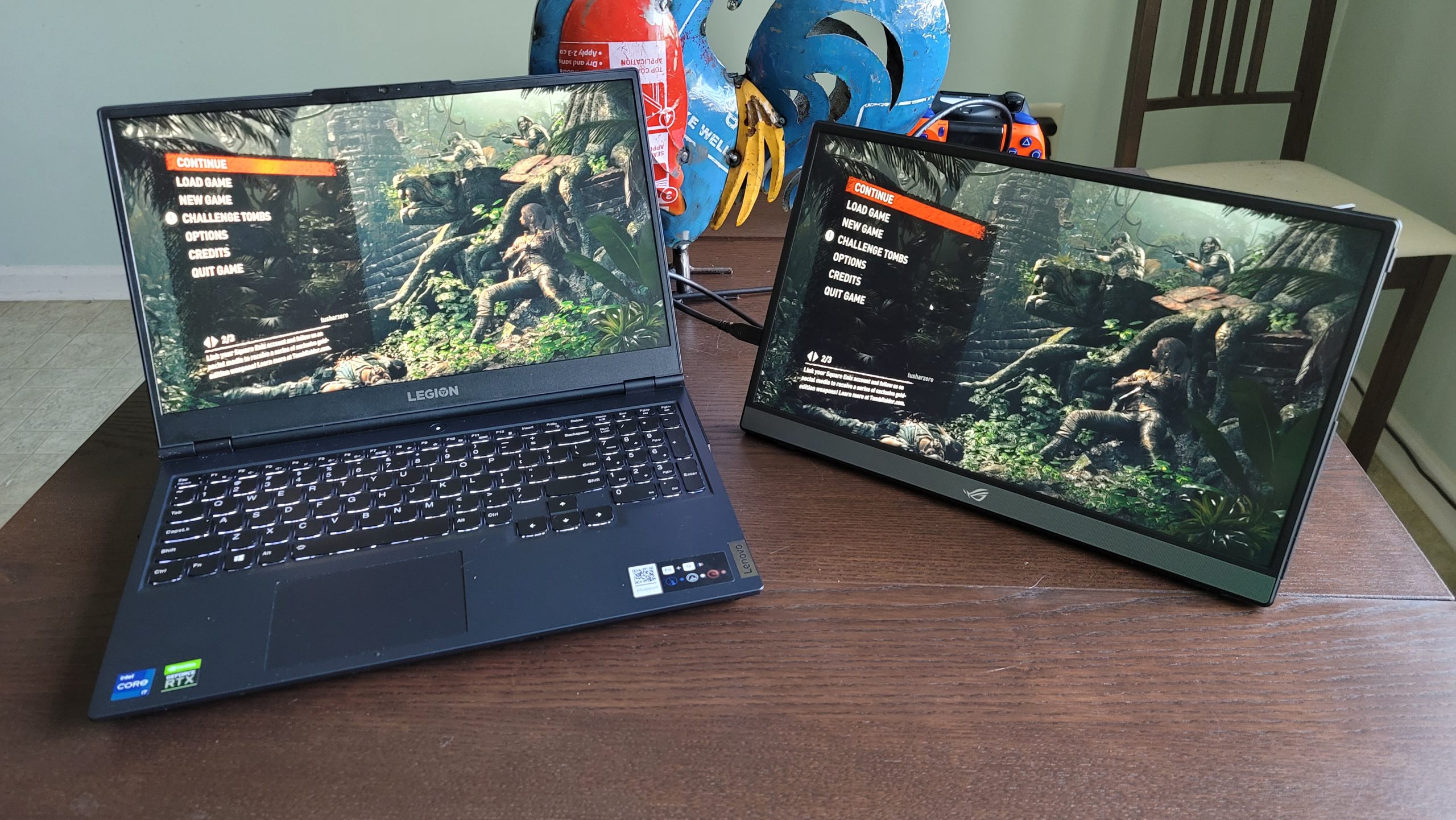 Outside of gaming I’m a career IT guy, so portable monitors is tech I absolutely love for both work and play. There’s low cost options for when I don’t need anything too flashy to plug into a server on a rack, but today we’re looking at one built for play – the ASUS ROG Strix XG16. You can pick one up for $399 at Asus. I took it on the job as well as all around my gaming life, The XG16 is a portable gaming monitor with a lot of features packed in. At 15.6″ it provides a 144Hz on the go, allowing for extending your setup or letting you play on a premium screen while you’re traveling or mobile. Physically it’s under half an inch thick and has some pretty thin bezels on three sides. Across the bottom though is a built-in soundbar, so when you’re hooked up with HDMI or DP it can carry audio as well without needing separate speakers. If you want to be more private though, there is a 3.5mm headphone jack as well. All of the ports are on the left side, which includes that headphone jack, a micro HDMI port, and 2 USB-C’s that can be used for DisplayPort and power. The built-in battery lasts for about 3 hours, but being USB-C I charged it up on both my phone charger and the USB-C power brick from one of my laptops. Since all of the ports are in the same spot you can plug in both video and power at the same time without the included cables becoming a tangled mess, so you can still keep your workspace clean even if it’s small. The one feature we’re very happy with is that this doesn’t rely on folding up a case the right way to use it, and instead has a clever kickstand built into the back to let it stand in both landscape and portrait mode. And instead of that folding case you get with many portable monitors, the XG16 comes with a nice soft travel case, which we very much appreciate.

We tested the XG16 in three scenarios:

Now, we understand that the PS5 isn’t exactly what can be considered mobile, but hey some people travel with their consoles so I guess there’s a use case there. It does also work with PS4 if you decide to turn that into your travel console for kicks. We hooked it up with the included HDMI to micro-HDMI cable, and when the battery started to dip, we were able to give it some charge plugging directly into the PS5’s USB-C port. For consoles that don’t have a USB-C on the deck, you have the included USB-C to USB-A adapter to be able to still plug in. One of the big things that makes this a portable gaming monitor was immediately evident – and that’s the soundbar running across the bottom. Since we’re piping signal through HDMI, we’re passing audio as well, so we don’t need a separate speaker system to get console audio. The sound was crystal clear – we only wish it went a bit louder since the PS5 itself has no volume control like on a PC or laptop. That said, we’re looking at a mobile setup, and if we really wanted to boost the audio, we can pull out one of our many 3.5mm earphones to pipe it directly into our ears.

The picture was also great. This is an FHD screen so even though it doesn’t go beyond 1920×1080 to match current-gen console capabilities, the 300 nits was still enough to provide great picture with what we thought was really good color representation. The ray traced shadows and lighting came through as well, as you can see here when we took the monitor for a spin with our PS5-upgraded edition of Control (despite what my horrific photography skills may show) For PC we had a bit more flexibility with connection and you should be able to work with whatever your setup is on both laptop and desktop. HDMI works the same way, but you also have the option of using the included USB-C cable to hook up with DisplayPort over USB-C. We found this to be good for a couple of different scenarios – first, there are a lot of gaming laptops out there that come with premium video cards but FHD display panels with low refresh rates. Secondly, this easily becomes an on-demand second screen to extend your display to provide more desktop real estate. This second scenario was super helpful for work, and helpful when I was on site with a rack full of servers I just needed some direct eyes on. Personally when I’m at my desktop rig I generally have some media streaming app running while I work. The XG16 proved not only to be a great device to give me that ability on my laptop, but also as a great unit to just watch media on when you’re on the go.

For mobile, I’m kind of playing in hard mode with the equipment I have. Samsung mobile devices operate through Samsung DeX and sometimes getting that set up is a bit shaky. In this case we were able to pipe DeX out to the XG16 using the USB-C port on the bottom, but got warnings that a high-power device was connected. So we had to have the power hooked in as well to maintain a steady connection. Once we got it up and running we were able to use the phone as a trackpad, but were unable to get it to pipe sound through to the XG16’s sound bar. The phone held onto the audio role, but we were still able to watch our media without issue.

In all three situations, we were happy to find that input lag was for the most part a non-issue. We had a bit of noticeable delay using DeX, but that was about all.

Overall the XG16HPE is an excellent portable monitor, and gives you the flexibility to play (or work) in multiple modes for console, PC, and mobile as well. That flexibility comes at a cost though, and the $399 price tag might be a little steep for some users that are looking for a small traveler. This isn’t going to be your main display on your desktop rig, but can fulfill pretty much every other mobile need that you have, and is definitely gaming grade.