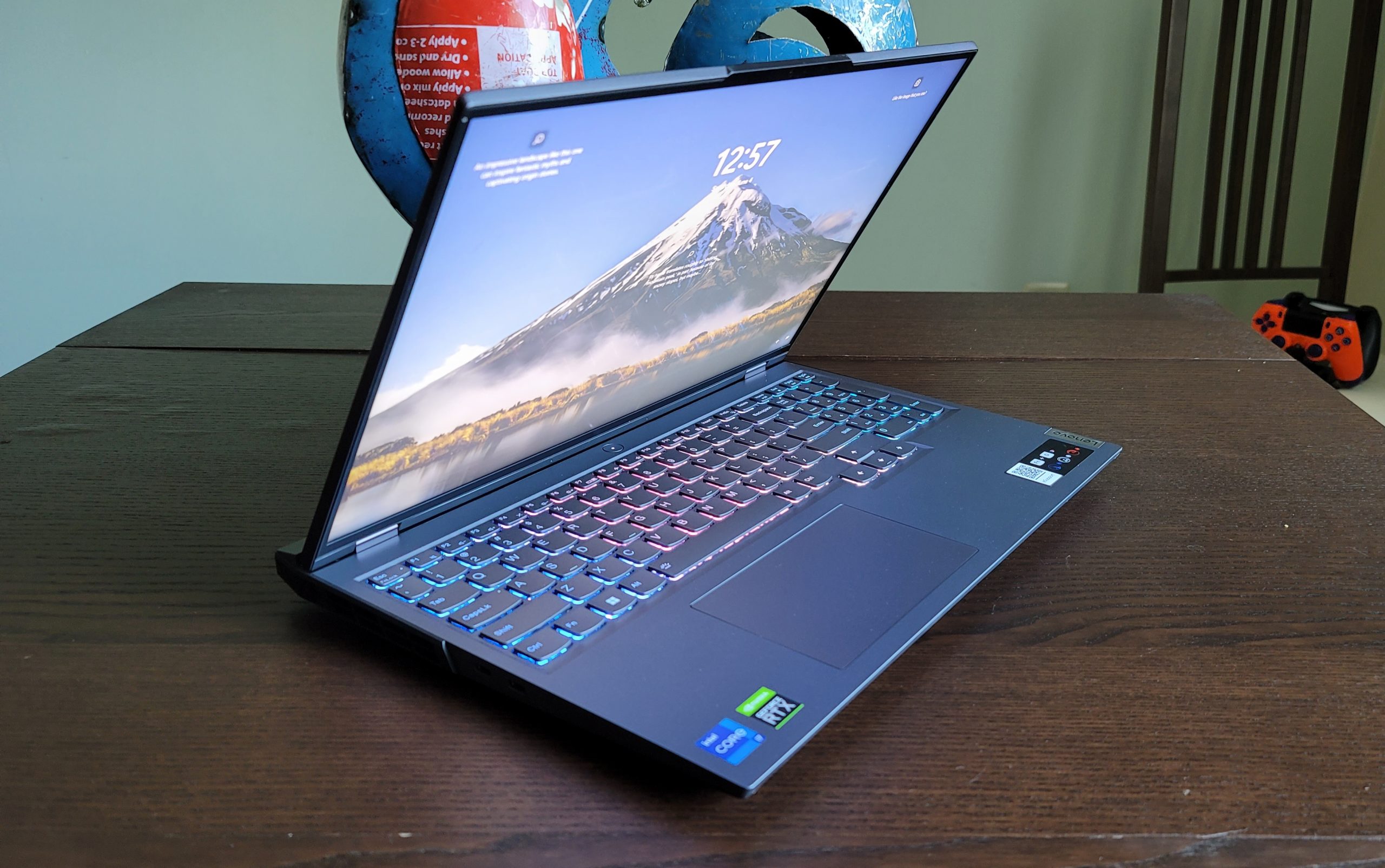 Ports for all of your needs

Wish I could turn up the sound a bit more

1TB should be the minimum storage option for a games library

Lenovo’s 7th generation of the Legion 5i Pro was something we were excited to get our hands on since we saw it as part of their CES 2022 lineup. Just a step down from their flagship Legion 7, the 5i Pro is, as its name suggests, a more premium edition of their Legion 5 gaming laptop. While it kept most of the same aesthetic, the hardware change from gen 6 to gen 7 were transformative, with a massive jump in performance which you’ll see as we move through. The Pro is available in both Intel and AMD flavors, and as the “i” denotes we’re running an Intel model for our tests – starting at $1,569.99, here are the specs of our review model: Aesthetically there isn’t a huge change from the Gen 6 – The “Legion” logo is what graces the center of the lid instead of last year’s “Y” logo with a couple of angled contours to give it a bit more of an aggressive feel. The port layout isn’t that different either, with the exception that we have more USB-C and Thunderbolt available on this model. It’s still a hefty laptop – even though it’s still under 1″ thick at 0.78″, it weighs in at 5.49lbs. That does however come with a very sturdy aluminum case build that feels solid when using it. Like most of Lenovo’s new systems, the 5i Pro has a 16:10 aspect ratio – but on this particular model we have a nice bright 500 nit, 165Hz screen at 2560×1600. It still surprises me as I review more laptops how much the 16:10 aspect ratio really makes a difference over 15.6″ models. On the top of the screen is a 720p webcam with an e-shutter switch located on the side. With that we do have plenty of ports on the 5i Pro. On the left and right sides are the e-shutter switch for the webcam, a headphone/mic combo jack, a USB-A 3.2 Gen 1, a USB-C Gen 2 (DisplayPort 1.4), and a USB-C Thunderbolt 4. The remaining ports are on the back of the machine for convenience, and include the AC adapter power in, RJ45 ethernet, HDMI, 2 USB-A 3.2 Gen 1’s, and another USB-C Gen 2 DisplayPort with 135W power delivery. All added up it was more than I needed at any one given time. On the deck is a great keyboard we loved typing and playing on with quick action, and the RGB lighting can be configured in 4 zones through Lenovo Vantage.

The internal spec changes are what make a big difference over the previous generation of 5i Pro. The upgrade from 11th to 12th-gen Intel H-series processors is awesome but expected, as is the GPU upgrade from an RTX 3070 to a 3070 Ti (higher is reserved for the Legion 7). But the biggest change is in the memory. This model bumps us up from DDR4 to DDR5, operating at a speedier 4800MHz. As you’ll see in the next section, the performance increase was pretty big.

We were also impressed with the cooling – Lenovo’s Coldfront 4 has 5 pipes to dissipate heat, with thinner fan blades and a dedicated copper block for the processor. While it started heating up in performance mode I could actually feel jets of cool air flowing around using it on my lap, and it was a bit quieter than its predecessor.

The new 5i Pro went above and beyond our battery of tests and performed like a champ. With super smooth 4K gaming, even with the ray tracing turned all the way up, we found there was very very little we couldn’t do with this laptop. Here’s how it did:

3DMark Night Raid: You know, just for fun. 50,262 as expected from a high end gaming laptop.

Procyon Photo/Video Editing: The test for Adobe Photoshop and Lightroom gave us a 9,545, and we got a 6,456 for testing Adobe Premiere Pro. This actually beat the Xeon-powered P15 Gen 2 workstation, which was running an RTX A5000. Shadow of the Tomb Raider: We got 2 to 3 times the framerates as we did with last year’s model hanging out with Lara Croft. With DLSS set to performance, we were easily able to get 60fps+ at 4K at max settings. Final Fantasy XV: We didn’t get quite the dramatic improvement over last year’s model with Noctis and his crew, but did see anywhere between a 15%-30% bump depending on settings. We were also able to get the elusive “extremely high” playing in FHD. When you’re cruising in the Regalia, it looks very pretty. After having no problems with anything else from the Steam library, we took a literal test drive with Forza Horizon 5 on XBOX Game Pass. With the 165Hz screen at 500 nits, even the reflection of sunlight off of the cars was a spectacle at nearly 100 fps.

The 5i Pro handled every test we threw at it with ease, providing a great gaming experience with the tools to let you play in 4K with decent framerates.

So we have a 3070 Ti and a 500 nit screen – so we weren’t expecting crazy battery life. As per usual we started at a full charge, operating the 5i Pro as our everyday computer, on wifi, 60% brightness and in balanced power mode. First up, enjoying some of the new season of Stranger Things was on the books, spending a couple of hours on the first 2 episodes of the new season 4. After the show I switched into work mode, checking out vendors online for some purchases I’m looking to make for my clients later this year, having a couple calls, and doing super exciting stuff like organizing some purchase orders and invoices. A little bit of a YouTube break was in order, to be followed right up working out of Microsoft 365 and doing a bit of admin.

After all was said and done, we got 5 hours. On the button. Just like advertised. This is one of the few times we hit precisely what a laptop manufacturer publishes as the estimated battery time and we were happy to hit that mark. Naturally this number is going to go down and up by a little bit based on power mode and screen brightness, but still, not bad.

Lenovo’s Legion 5i Pro Gen 7 is a solid Intel-based gaming machine that gets it done for, well, pretty much everyone. Sure the top top components like i9’s and RTX 3080’s are only available in the Legion 7, but the 5i Pro at a lower price point (the 7 is north of $2k) still delivers a great gaming experience, and is still one of the most powerful notebooks we’ve played with.

As a daily driver 5 hours may be a bit low for battery life, but this is a gaming laptop so we’re not going to hold that against it too strongly (plus the fast charge helps). And with the number of ports as well as an RJ45 port in the back, this has additional values for IT folks such as myself.

June 6, 2022
Our Review Process
Latest Reviews
Where to?