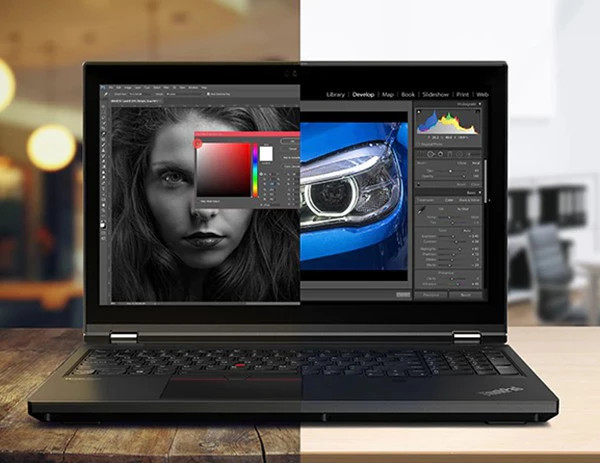 Performance to be a mobile desktop replacement

On the pricey side without a Lenovo sale

Fans can get quite loud under heavy load

When it comes to mobile workstations the P-series of Lenovo’s ThinkPad line can sometimes break away hard from the thin and light models we’ve been reviewing over the past few months. With the intention of serving as a desktop replacement, the P15 is one of those units, and as I understand it’s what some of the kids these days would refer to it as a “chonky boy.” It is quite a big laptop, but if it’s going to be a desktop replacement then it really should be, like they used to be during old school computing times. This is the second iteration of the P15 so we are looking at 11th-gen i9’s and Quadro graphics. The current models start right now at Lenovo for $1,709 with an i5 and NVIDDIA T1200, but what we had is a bit more fanciful, and would run about $4k. Here our specs before we begin: So the model we have is a straight up beast running an 11th-gen i9 and RTX Quadro graphics as one of the higher end P15’s available. The P15 in general is pretty flexible, and can be configured with a Xeon all the way down to an i5 for processing, with the available video cards ranging between the RTX A5000 at the top down to a T1200 making sure you can find a model that suits you.

This one we have though is what we call a “desktop replacement.” It’s big and it’s heavy, but wherever you go we don’t believe your digital abilities would be at all hampered. Starting at 6.32lbs (ours is 6.6lbs), the P15 can measure in at less than an inch thick at 0.9″, but ours is 1.2″ thick with all the goodies throw in. That said it is a big boy with 14.7″ x 9.9″ footprint housing a 15.6″ screen. We have an FHD (1920×1080) antiglare IPS at 300 nits which is nice on its own, but those who are ok trading battery life for brightness can go up to a UHD OLED touchscreen at 400 nits. But what we have suits us just fine. It still follows along with its ThinkPad cousins and features a 180 degree hinge too.

The chassis is the same solid build as the thinner ThinkPads we know and love, but feels much sturdier because of the additional heft (we have the P15 with an X1 Carbon on top for your chassis comparison pleasure). With the additional housing the bezels are going to be bigger than something like the Carbon which is going for compact, but it does leave place at the top of the frame for a 720p webcam with physical privacy shutter (we have the IR option in ours which works with Windows Hello).

The keyboard is a nice full size ThinkPad keyboard, with arrow keys separate from the number pad to make typing a bit more natural and desktop-y. Full size keys with the ThinkPad keycaps were very comfortable to type on, and the fingerprint scanner right next door was very convenient. The additional size also lets the P15 have a number of ports for all of your accessories – on the left side we have a full-size HDMI out, an always-on USB-A 3.2 Gen 1, the headphone/mic combo, and the slot for the optional WWAN nano-SIM card. The right side has an SD card reader and a USB-A 3.2 Gen1. On the back, in addition to the power and RJ45 is where it doubles down on USB-C, with one standard USB-C port and 2 USB-C Thunderbolt 4’s.

The advantage of a laptop this size is that there’s room to grow. Our model has one SSD in it, but that can be expanded to 3 SSD’s at 2TB each, with a built-in RAID 0/1 option for mirrors or striping. Being able to boost the memory up to 128GB doesn’t hurt either.

In short, if one of Tony Stark’s Iron Man suits is a slim and trim X1 Carbon, the P15 could easily be the Hulkbuster. What’s more impressive is that it only requires a 230W power brick, the same as a Legion 5i packing an i7 and GTX 1660.

Also cool is that this is preconfigured to work with Lenovo’s ThinkReality AR glasses, which lets a user have up to 5 AR monitors as a workspace, even if they have tight room in wherever their workspace is. We’re in the process of giving them a full review at the moment too, so make sure you stay tuned here for the coming week – in the meantime here’s what we see at the moment when we plug the glasses in – instant multi-monitor setup.

Doing “work stuff,” which is kind of the intended use of this machine, went remarkably well. We work in large data sets and We were very interested in seeing what an i9 and RTX A5000 would get us in our “gaming” centered tests. But since this is a machine for engineers and artists as well, we ran some additional benchmarks. Procyon focuses on image and video editing through the Adobe suite of apps – and here’s how it fared:

3DMark Port Royal: This test gave us a 6,272 which was in line with the Legion 5 Pro we ran. It beat 48% of all results and came close to the average high end gaming desktop.

Procyon Photo Editing: This test gave us a 7,776 for editing and working with large photos in Adobe Photoshop and Lightroom.

Procyon Video Editing: The video editing benchmark that tests rendering and editing in Adobe Premiere Pro gave us a 4,763. Shadow of the Tomb Raider: We were able to comfortably break 60 fps even with ray-traced shadows all the way up thanks to the RTX A5000. I mean, I guess having an i9 helped a bit too:

This actually beat the Legion 5 Pro. We were almost shot for shot with the Legion 5 Pro here but running those high graphics at 4K is where the RTX Quadro A5000 fell off versus its high-end GeForce cousins. Still, with the results of the highest settings providing standard performance, a break from AutoCAD to drive around in the Regalia wouldn’t be out of order.

Again, we feel it’s or responsibility to make sure you know – this is a finely tuned laptop for professionals and is priced appropriately. Though we did get some fantastic numbers here – do yourself a favor and stick with Legion for gaming.

And now to the most important thing (for us, anyway) – the real world battery test. We unplugged from the wall, fired up the wifi, reduced the screen brightness to 60% and we were off. The show we start with for a couple hours of media? Amazon Prime’s Truth Seekers. After a couple episodes of this was doing some very boring office work in Microsoft 365 and Power BI with my standard load of SQL queries. I’ve got to say the i9 actually shortens the time I have to spend on this, since it opens large files and SQL queries with such efficiency. Now refreshing a query is bottlenecked by your network connection instead of the processor. It’s a big and noticeable difference over the 10th-gen i7 in my main laptop.

After taking it to a couple of work sites and some standard YouTube-based time wasting after the day was over, I was able to get just about 9 hours, which while short of the advertised 10.3 hours, is still excellent. With a machine of this size and i9 power, we’re getting about as much battery life as the much slimmer and travel-optimized X1 Carbon. Granted, the Carbons have much smaller power packs required to get there, but 9 hours is 9 hours. We’re sure if this had the brighter upgraded UHD touchscreen, we’d see a bit less than that.

Overall Lenovo’s second outing with the P15 mobile workstation is pretty solid and exactly what it says it is – a mobile workstation. The increased size of course comes with a bit more chunk to travel with but also provides increased specs as the tradeoff. We like the flexibility of this unit, with different Intel processor and NVIDIA Quadro options to come up with something to fit the budget. It can be configured to up to a 4K touchscreen (for about $6k) And even if you start small, it’s easy to crack open the bottom panel to expand your storage and memory. With an SD slot, plenty of ports including a pair of Thunderbolts, and optional WWAN, you’ll never be without the peripherals and displays you need wherever you are. And if you’re short on space this unit comes configured to natively run with ThinkReality glasses to virtually expand your workspace.

In short we miss these big thick laptops that we would take anywhere and still do anything we needed for work, with the Quadro graphics providing some bonuses for high-end games. High specs will be higher pricetags, but we still love this chonky boy.

October 1, 2021
Our Review Process
Latest Reviews
Where to?