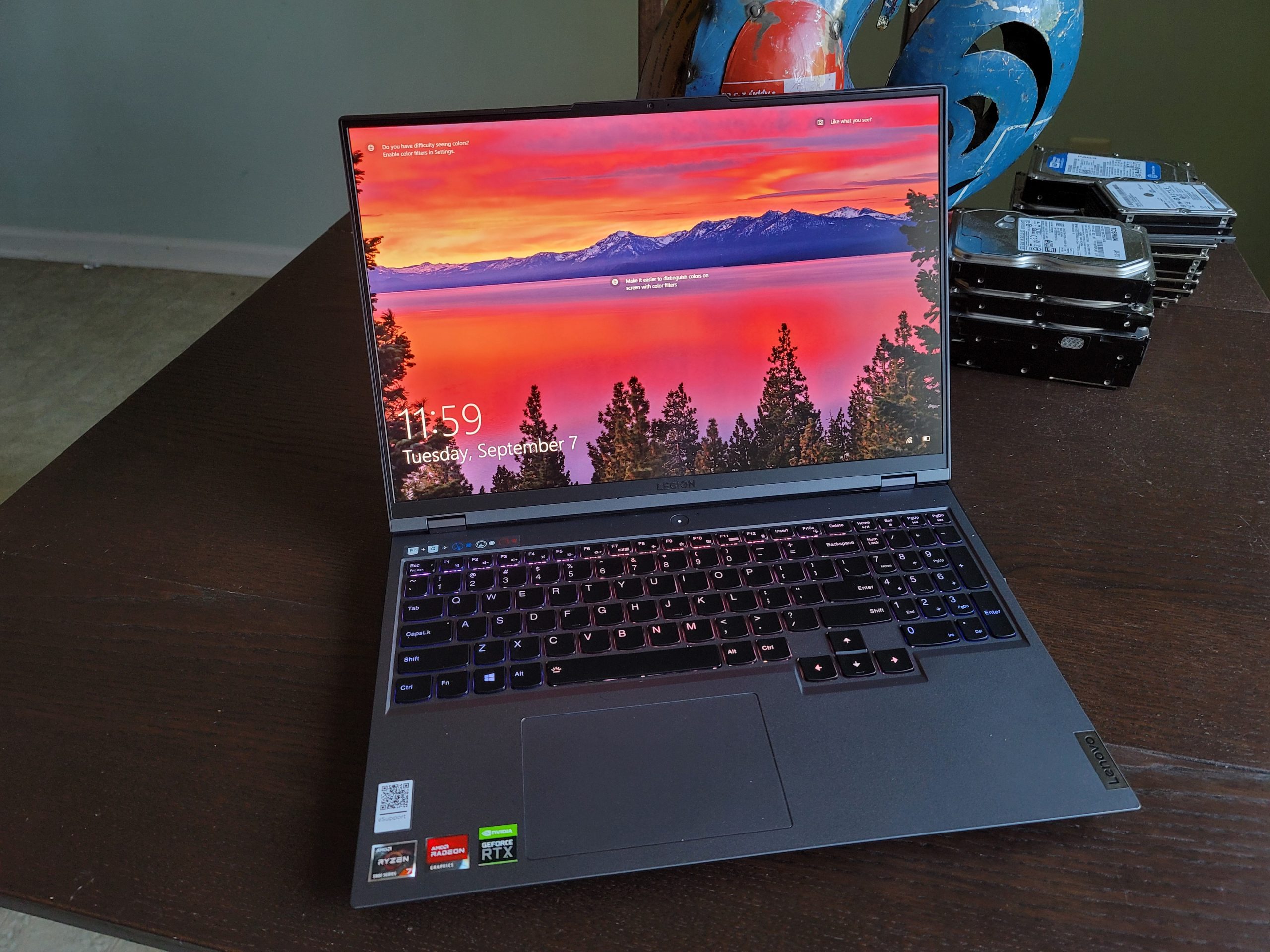 Huge power brick is a bit tougher to travel with

Can run super hot while running full out

It’s back to gaming for our Lenovo reviews with the Legion 5 Pro 15″, and we’re going to start off saying this is one of our favorite Lenovo Legions to play with since we started doing product reviews here. These run AMD procs with NVIDIA RTX graphics which are able to team up for a well-balanced gaming machine. We would be able to use this for not just FPS, but WFH. Right now it starts at $1,099 at Lenovo for a Ryzen 7 5600H and RTX 3050 with a 256GB drive, with our test model being more around the $2k mark. Here are are our specs:

Way back during CES at the top of the year we said the gaming trend was Ryzen processors paired with NVIDIA graphics, and Lenovo’s Legion 5 Pro is a prime example of how that pairing is really making systems go. We’ll get to the performance later, but wanted to make note of this because it is a bit of a departure from previous generation Legions. Aesthetically, the design feels like a bit of a throwback to old school Legions, starting with the lid logo. Instead of just “Legion” pressed into the corner, we have a white LED-lit “Y” logo calling back to the days when Lenovo’s Legion branding was just beginning, and gaming laptops carried yXXX model numbers in the IdeaPad line. The design itself is a bit more aggressive than the previous generation, bringing more angled lines to the lid as well as the back, where the vents are more pronounced on the sides kind of like dual exhausts on the back of a car. From the outside it still looks and feels similar in size and weight to last generation’s Legion 5, but opening it up highlighted the difference. The first and biggest difference is that this is a 16″ screen as opposed to a 15.6″ without increasing the size of the unit from the previous generation (take a look at the side by side with last year’s Legion 5i). And while that may not sound like much of a difference, your screen real estate is noticeably larger, and brighter too. It’s a 500 nit IPS panel, and I was very impressed with how bright and vibrant it was compared to reviews over the years – this is the best screen I’ve seen Lenovo put on a Legion since the brand began. They borrowed a page from ThinkPad’s playbook by bumping the aspect ration to 16:10 and it does make a difference for sure.

Like previous Legions there are three thermal settings – Quiet, Balanced, and Performance. The first is a good option for power saving and you’ll spend most of your time in Balanced. Performance mode amps up the fan speed and power draw and is only available when the system is plugged into the wall. I kind of wish I could turn on performance mode even when the laptop isn’t plugged in, even if it would only get me a couple hours of gameplay – the accompanying adapter is a huge 300W brick, and I didn’t really always want to grab it. The keyboard is great to type on and we definitely like the large touchpad for mouse control. It comes with some RGB LED lighting that can be controlled through the Vantage software. You can keep 3 different lighting profiles and switch between them with keyboard shortcuts. We really wish we had some more lighting control here like we did we did in previous generations that used Corsair iCUE. In addition to static lighting there are 4 different dynamic lighting modes, and the keys can be divided into up to 4 lighting zones. So if you’re using this laptop for double work/play duty like I do, one of your lighting modes can be static white light.

Because you know, #professionalism.

Overall they’ve kept a solid build quality and feel while going a bit more aggressive on the aesthetics and lighting. If I compare this to my 2020 Legion, this one definitely is purposely built to not just have gaming performance but a gaming look and feel too.

We put the Legion 5 Pro through our battery of graphical tests and in a nutshell, it performed far better than what’s considered the average gaming laptop. Since the screen resolution on the Legion 5 Pro is 2560 x 1600, we hooked it up to one of our 4K monitors to get some better testing data. Here’s how it fared:

PCMark 10: Our standard benchmark for office applications gave us a 6,691 (Essentials 9,082, Productivity 9,626, Digital Content Creation 9,301), far higher than the average gaming laptop score of 4,515. The bottleneck on most laptops is the digital content creation portion of the score, which is something we don’t see with gaming laptops, since they’re packing dedicated GPU’s instead of integrated graphics. The Legion 5 Pro scores more in line with desktop gaming PC’s.

3DMark Port Royal: This ray-tracing test came back with a 6,538, dwarfing the average gaming laptop score of 4,515, falling more in line with desktop gaming performance. Final Fantasy XV: Smooth, smooth, smooth. Like with Shadow of the Tomb Raider, any graphical range without the external 4K monitor had absolutely no issues. And even hooking it up for 4K, it still did quite well:

Mighty impressive scores – still one of the graphically higher demanding games to play which you’ll still be able to run on high graphical settings in 4K resolution. Outside of our standard tests we also fired up some of the more demanding stuff from Xbox Game Pass like Control and Medium. Both games take advantage of ray tracing tech and were liquid smooth during play.

As we mentioned when plugged in we can get into performance mode, and while the fans do a great job blasting heat away from the guts of the machine, it definitely still gets hot under load.

In short, every formal benchmark as well as our gaming experience showed without exception that the Legion 5 Pro has desktop-grade gaming power at 5.4lbs.

To see how this would fare as our everyday laptop, we did just that. With the battery charged to 100%, operating on wifi, the screen brightness at 60%, thermal mode in “balanced,” and battery setting at “better performance,” we were on our way. We kicked it off with some media streaming, going appropriately with three episodes of The IT Crowd before doing real work. After the cringe set in after a few episodes we moved on to starting to write this article in between sprints of querying large data sets in Power BI and Salesforce.com. It didn’t last me the entire day, but I was able to get about 6 and a half hours out of it. The advertised battery is 8 hours, but you can’t get closer to that in balanced mode. If you click the thermal mode into “quiet” that will sip battery a bit slower. Adding quick charge brings you back up pretty fast when the battery starts to dwindle though.

In that regard I’m very glad the Legion 5 Pro doesn’t come with a 4K screen – pumping 4K from an RTX card at 500 nits would likely destroy battery life, so this was a smart choice by the Legion team.

In my world I like having a single laptop to do everything, and in that regard we love this machine. The Legion 5 Pro isn’t just one of Lenovo’s best gaming laptops to date, but one of the best gaming laptops we’ve ever had the chance to run across the board. Even with the more aggressive aesthetics than previous generations, it’s still more function over form when you compare it to something like the Razer Blade Advanced. But that function is great, and the RTX 3070 combined with the new Ryzen 7 series mobile processors delivers fantastic performance.

The first thing I would do though is crack mine open and do some disk surgery to get some more storage on my review model though.

You can still get good performance and a ray tracing RTX 3-series card for under $1,500, which also brings some great budget and availability for a wider range of users that don’t need those top-end specs. And right now card availability is pretty tough to navigate through.

September 7, 2021
Our Review Process
Latest Reviews
Where to?