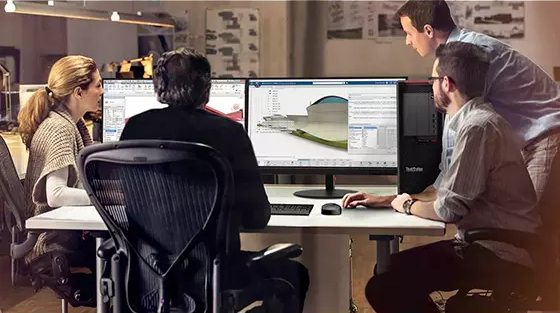 up to 64 cores with the top-end Threadripper Pro

Can get rather warm and a bit loud

Upgrade to price of upgrade ratio

We’ve got the ThinkStation P620 today – another of Lenovo’s high-speccable workstations, but this time we’re trading in Intel’s Xeon processors for AMD’s Threadripper Pro to see how it fares. Right now these start at $1,936 at Lenovo, with the current top end ready-to-ship model still coming in at about $3,500. That will get you 32GB of memory and a Quadro RTX 4000, but our model is a bit more… supercharged. Here’s what we had to work with: The ThinkStation P620 has a similar chassis to the P520 and P920 we reviewed a little ways back. At max configuration this workstation is just shy of 53lbs – so if you’re an engineer that’s stuck at the office and can’t get to the gym, you can do some workstation lifts if you really want. That weight isn’t too much trouble though because like its ThinkStation siblings it has a carry handle in the front, allowing you to pretty easily move it to other locations should you need to. Of course that’s lighter than the super-high-end P920 that can break 80lbs. As far as footprint it’s closer to the P520, measuring in at 17.3″ x 6.5″ x 18.1″ and has a good number of ports on both the front and back of the machine. Also like the rest of the current line of ThinkStations, opening the chassis is made incredibly easy with a lockable spring loaded hinge that opens the side panel. There’s plenty of room to upgrade your hardware for not only 6 drives for storage, but a second NVIDIA card should you need one. Even the insides are modular, giving you the ability to tear it down with a series of levers, making it easy to service as well.

So, Threadripper Pro. Quadro RTX 6000. We expected a lot from our benchmark tests and we were not disappointed. Sure this is a machine that’s more suited for an artist or engineer to load up Adobe suites and CAD software, but the gaming tools we have in the box were enough to illustrate the type of power this was packing.

The big deal here is that this outscored the P920 we tested that had Xeon processors and 2 Quadro RTX 8000 cards inside. This shows the power of the Threadripper Pro over the Xeon, which is the only way this machine scores higher since we’re using lower end cards.

3DMark Time Spy: This test gave us a 10,172, which beat 89% of all machines, again beating a gaming PC (9,216), and approaching “high-end” gaming machine. While the Threadripper Pro gave the big advantage on processing power in our PCMark test, unsurprisingly in a DirectX 12 test it fell short of the 15k+ score our P920 delivered with its dual Quadro RTX 8000’s.

3DMark Port Royal: Testing ray tracing gave us a 8,977, beating the high-end gaming PC score of 6,490. This even did better on this benchmark than the Legion 5 Pro we have under review right now as well, which runs a Ryzen 7 and RTX 3070 laptop graphics card. Shadow of the Tomb Raider: What we’re calling “basic” settings for this test was everything tuned up the the “highest” setting at FHD. This got us 143 fps, which is mighty mighty impressive. We cranked up the the resolution and ray tracing settings and here’s our complete results:

Yes that’s right, 60 fps is the low end on frames per second, and that’s with everything, including ray tracing cranked all the way up. On a single video card. Final Fantasy XV: We got equally impressive scores on the Final Fantasy XV benchmark, where we were able to test up to the highest settings. Without screen tearing, render issues, or hiccups, here’s what we got:

Again, the lowest score was “high,” and with all the settings tuned up this game will still play flawlessly.

We knew the performance was going to be good, but we didn’t know how good it would be since our only real comparison on a current Quadro was a pair of RTX 8000’s. But what we were really able to see was the power of AMD’s Ryzen Threadripper Pro – not only for deskop applications but as something that supports a high-end GPU for rendering and graphical tasks. On the gaming side, at least with many laptops, we’ve seen manufacturers start moving to a Ryzen processor / NVIDIA GPU since CES at the start of the year, and we’re beginning to see why. The same type of logic easily carries over to the professional world. I mean who couldn’t benefit from SIXTY FOUR CORES? There’s simply not a single-chip equivalent on the Intel side to match that without upgrading to the dual-proc P720 or P920.

Since it’s a workstation there’s no real world battery test, but what we can tell you is the ridiculous speed with which this machine operates everyday desktop tasks. One of the apps I use a lot is Microsoft Power BI, which on some machines could allow you to go make a sandwich  while a file opens. My main machine has a 10th generation i7 with a GTX 1660, and on that one it can take up to a full minute to open one of my larger power BI files. With this Threadripper Pro? 15 seconds or less. Desktop processing takes a huge leap, and that will follow while trying to open your Adobe and CAD files as well.

I will take a second to talk about the power supply though. The P620 is packing a 1000W PSU, which can legit keep a room warm in those cold winter months. Seriously, the room it’s in is notably a couple degrees warmer than the hallway. BUT…

That also means you’re not going to have to worry about power issues, regardless of what you pack into this chassis.

And that bring us to the only real downsides – it can get warm, and it can get loud.

Lenovo’s ThinkStation P620 seems to offer the balance a lot of folks are looking for. Since it’s a desktop it’s upgradable and customizable to your particular needs. And while customizing this machine to top tier can be a significant investment, you can still come in with a Threadripper Pro and NVIDIA Quadro P620 for under $2k. That on its own goes a long way for artists and engineers doing their design work. And as I say with all workstations –

**JUST BECAUSE THIS GAMES LIKE A CHAMP DOES NOT MEAN BUY THIS AS A GAMING MACHINE. IT IS A WORKSTATION.**

NVIDIA RTX Quadro cards which support ray tracing and provide similar performance to the RTX 3-series gaming cards start at over $1k on their own because they’re finely tuned for professionals – so while this will deliver a gaming bonus to artists and engineers that need one for the office, if you just need a gaming rig? Do yourself a favor and go for one of Lenovo’s LEGION towers.

That said, this is a great workstation that lets you start small, and we love it not only for what it is but what the user can turn it into.

August 27, 2021
Our Review Process
Latest Reviews
Where to?