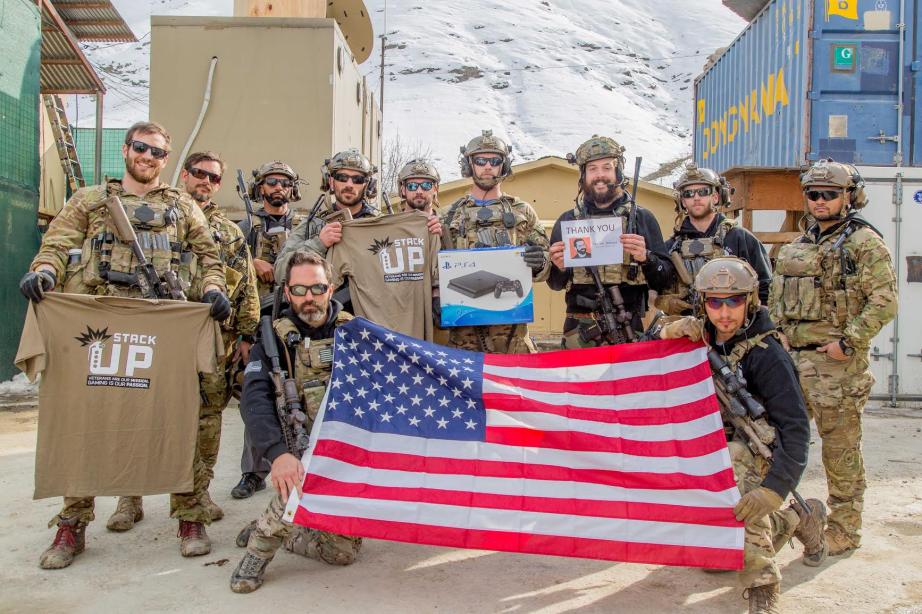 For those of you that have have been PAX convention regulars before COVID and will be again, you’re no doubt familiar with the legion of red shirts you see making the rounds on the con floor and at events. That’s Steven Machuga and his army at Stack Up, a military charity that provides service to US and Allied service members. Even without the con floor they were present for PAX Online last month, and I sat down with Stack Up’s Director of Communications, Bryan Snyder, for some more about who they are and what they do.

As they say in short – Veterans are our mission. Gaming is our passion. Stack up uses gaming as a vehicle to provide multiple services and support for active military and veterans coming home transitioning back to life here. Their work has received grants from both the Center for Disease Control Foundation and Newman’s Own Awards, namely the Stack Up Overwatch Program (StOP). They’ve also been honored as Global Gaming Citizens at the Video Game Awards. Stack Up was founded by Captain Steven Machuga, US Army (ret) when his unit received a strange care package while he was in Iraq – a crate full of old romance novels. They got some use out of them on the confiscated arms range, but that’s when he understood a real gap – people wanted to help, they just didn’t know how, or know what it was they wanted. From then on what started with care packages has expanded to become an organization that supports active duty service members and veterans on multiple fronts by addressing the mental wear and tear military personnel can experience like PTSD, depression, and other forms of emotional distress.

Stacking up is a formation used by military and law enforcement when preparing a breach and clear, where everyone comes together and “stacks” into a line by the entry point. This represents the community of service members, friends, family and supporters coming together for their mission of supporting veterans. Appropriately, that’s where the name came from.

So we know the romance novels ended up as shredded paper on the ground. But why video games? How is gaming gong to help? Bryan had an easy answer – “It’s 100% engagement. When you’re reading a book, your mind can wander, it can be somewhere else. But when you’re playing a game, you have to be there whenever you move that character so your mind is fully engaged with what’s going on.” There are a number of studies, including one on Stack Up’s own Overwatch program, linking video games and community with positive affects for mental health. Stack Up does this with a number of programs to help in both the digital world as well as IRL. Supply Crates are care packages brimming with gaming goods for not only service members in combat zones as preventative care and form of release, but veterans struggling at home as well.

Second is their Air Assault program, which provide all expenses-paid visits for veterans to conventions like various comic cons and gaming conventions like E3 and PAX shows. “We’re all about events,” said Bryan about the program. “We want to be able to bring veterans to those events and give them a VIP experience.” This of course slowed down while we were in the throes of the COVID crisis, but will be picking up again now that physical conventions and events are coming back into play. the Air Assault program brings veterans back into the community, connecting them with not only other military personnel but a community of civilians that share their interests. Air Assaults are done with the help of local Stacks – city or region-centered groups of volunteers that work in their local communities. Stacks set up events like game nights, movie nights, and other community projects. I imagined local Stacks would be active mostly in big cities, especially convention locations, but there are plenty of Stacks in smaller areas too. “Definitely the cities you mentioned – Boston, Seattle, LA is big, but we even have a stack in Sedgewick County, Kansas.”

While these are more event-oriented services, the StOP (Stack Up Overwatch Program) is ongoing and always on, letting someone get a hold of someone to talk to 24/7/365 through their Discord channel for suicide prevention, crisis intervention, or getting any resources needed for mental health support or for traversing the path from active duty to coming back home.

“The Overwatch program is a short term, on demand, ‘I need to talk to someone right now’ program. The long term support is really the community.”

The goal is really to get people away from StOP and to a better place, with continued long-term community support. The problems of isolation and depression that veterans face is serious enough on its own, but while we were in the throes of the COVID pandemic made it a bigger issue with not only veterans at home but deployed personnel. Stack Up was unsurprisingly up for the challenge – “COVID was interesting – more supply crates, up from 4 to 12. And it might sound funny now but not so funny then, that units were stuck where they were – they couldn’t clear out until COVID protocols were lifted. But the online community was more active than ever with more gaming nights and movie nights. We’re a community that’s good at being online.”

The accolades and recognition Stack Up has received for their work, especially StOP, doesn’t slow them down in their efforts to support veterans. “When your mission is preventing veterans from committing suicide, you know it’s not one that will ever be over.”

So how can we help? You can check out what you can do and how you can volunteer here. This includes leading game or movie nights, volunteering in your local Stack or even starting one of your own. Content creators and streamers can also see how they can stream and raise some funds for a good cause at the same time. And they make sure they maintain transparency, so you know where every dollar is going.

Stack Up is just a solid group of people doing outstanding work for our men and women in uniform. You can get more info on their Facebook, Twitter, and Instagram accounts, and check out their Twitch streams for more too.

August 18, 2021
Our Review Process
Latest Reviews
Where to?