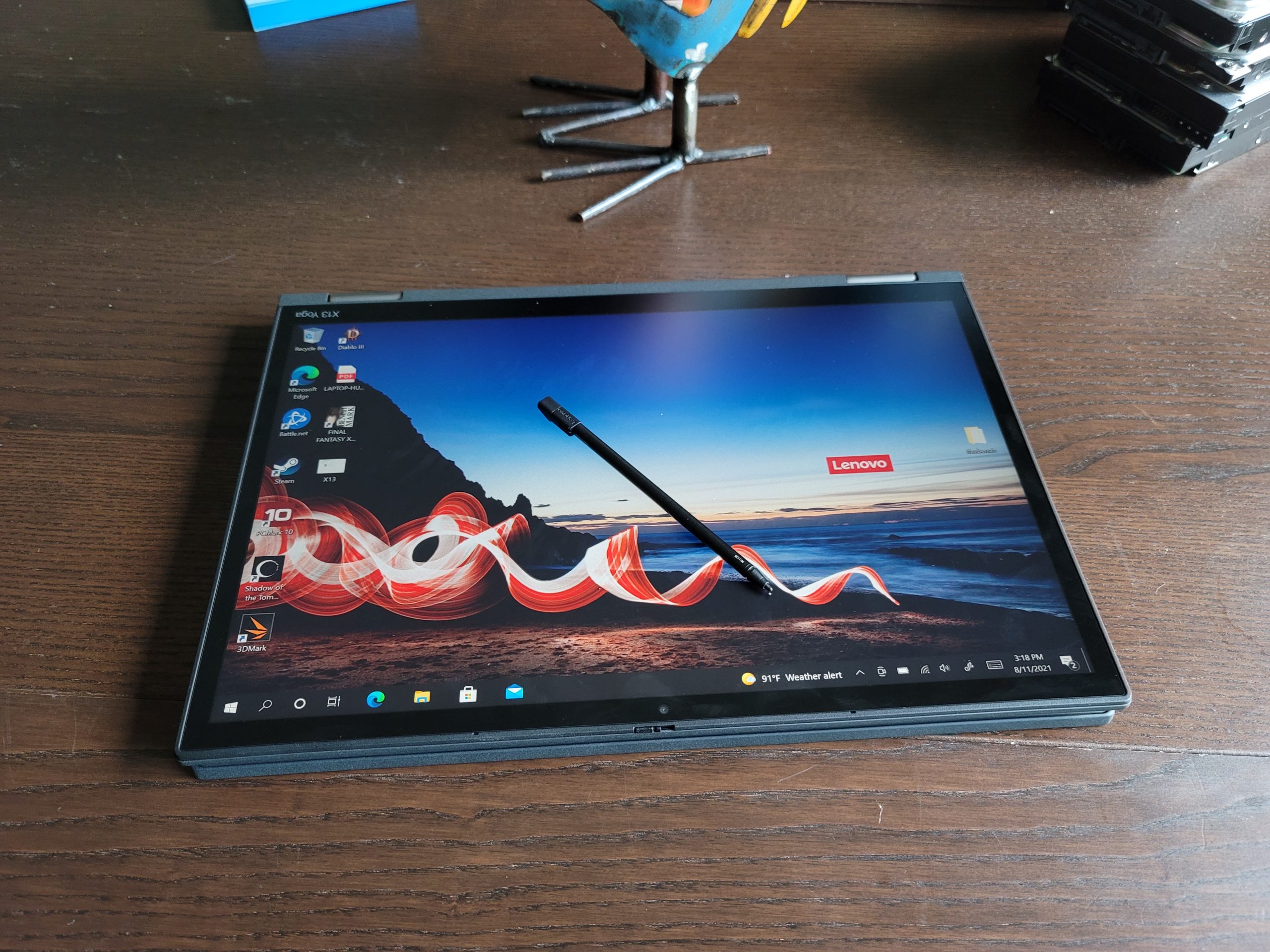 Shorter battery life than other Yogas

Dropped the SD slot from the L series

We took a look at Lenovo’s L13 Yoga Gen 2 this past May, and today we have it’s X-series cousin, starting at $1,271, and our test model version will run you $1,670. The main difference between the two lines of ThinkPads is the advertised difference in build quality and specs between the two, with X being the top tier and L being the lower. The specs we’re working with are similar, so let’s see how we fare, shall we? Here’s what we have to work with: Form factor is in line with other Yogas – a 360 hinge lets you use it traditional laptop mode and also turn the screen to operate in both tent and tablet mode. for tablet mode there’s a Lenovo Integrated Pen garaged in the right side of the chassis. While keeping the laptop juuuuust thick enough, also on the right side is a USB 3.2 Gen 1 and a Kensington lock slot. This is also where your optional SIM slot would be. On the left side are 2 USB 4 Thunderbolt ports, one of them for power. Another USB 3.2 Gen 1 and a full-size HDMI out fill out the rest of the left side. As far as ports go, the only downgrade here from the L13 is the lack of a MicroSD card slot. It’s a bit too thin for an RJ45, so if you need that you will require an adapter. The screen follows the new ThinkPad 16:10 screen resolutions to give you a bit more real estate. The 1920×1200 touchscreen comes in a few different flavors, ranging from the basic antiglare at 300 nits up to what we have – antiglare with privacy at 500 nits. The 500 nit screen is a nice upgrade over the L13 model which maxes out at 300. There’s a noticable improvement in brightness as well as color representation. Since it’s business geared, we get a standard hinge connecting the base to the screen without the soundbar in the middle that Lenovo provides for its home/enthusiast customers, but that’s not any surprise.

The keyboard keeps the same ThinkPad quality, but on a 13.3″ model it is a little cramped. But for those who value bag space and weight, that tradeoff isn’t going to be an issue for you.

Overall the X13 Yoga Gen 2 has a tighter and better-feeling build than the L13 Yoga Gen 2 does. It is sleeker and more compact, and feels sturdier. That’s the material upgrade to carbon fiber and magnesium, and you can feel the difference. We mentioned how this has a sturdier feel than the L13 Yoga Gen 2, and that includes a “tighter” feel when using it in tablet mode. The pen that comes garaged in this one is the Lenovo Integrated Pen, a thin and round stick stylus. This came with a surprise – by looks we didn’t think it would perform as well as the Lenovo E-Color pens we’ve used in the past, but it held up. The screen is a great writing surface, and we had precisely zero flyaways writing and sketching in both Whiteboard and OneNote.

As for performance, we have an 11th generation i5 same as our L13 review, and this is also running Intel Iris Xe graphics. We expected this to run a little bit better than the L13 Yoga Gen 2 – and with similar hardware it did. On certain tests it even outdid the X1 Yoga Titanium by a little bit. Here’s what we got:

3DMark Time Spy: As expected with no dedicated GPU, this tested at 1,200. This is a far leap from the average gaming laptop score of around 5,700, but it beat the average office laptop which doesn’t break 1,000. Shadow of the Tomb Raider: We were able to get this past 30fps, scoring 33 frames per second with all the settings at “lowest” and reducing the resolution to 1280×800. It still looked good and impressive that it still plays with onboard graphics. Overall the X13 Yoga Gen 2 performed better than the L13 Yoga Gen 2 as well the X1 Yoga Titanium while we’re comparing i5/Iris Xe models. These numbers would likely match the higher scores we got with our i7 version of the X1 Yoga Gen 6 if they had the upgraded proc. As we start off all of our battery tests, on battery and wifi, with the screen brightness at 60%. Our test started out media heavy, streaming Netflix’s Fear Street three-part series. Traveling through the centuries of horror was about 6 hours of runtime. After that the X13 replaced our standard X1 Carbon for work duty, drafting emails and crafting documents. When all was said and done, the battery life came in just a shade above 9 hours. This is less than some of the other Lenovo convertibles out there, but still not bad.

Overall, the ThinkPad X13 Yoga is among the leaders of the business Yoga family, up there with the X1 Yoga Gen 6 – the primary difference being screen size, the lack of 4K options and a shorter battery life on this model. But on similar specs, this beat out the L13 Yoga Gen 2 and X1 Yoga Titanium for performance and is the leader of the pack for the 13.3″ models. You can spec this up to the i7 version for just north of $2,000, though based on our tests we’re not sure how much performance boost you’ll get for the presumed battery tradeoff. There’s a lot of available Yoga options from Lenovo, and at a certain point your decision may come down to aesthetics and size. Regardless, we like it and it will serve the mobile business traveller well.

August 11, 2021
Our Review Process
Latest Reviews
Where to?