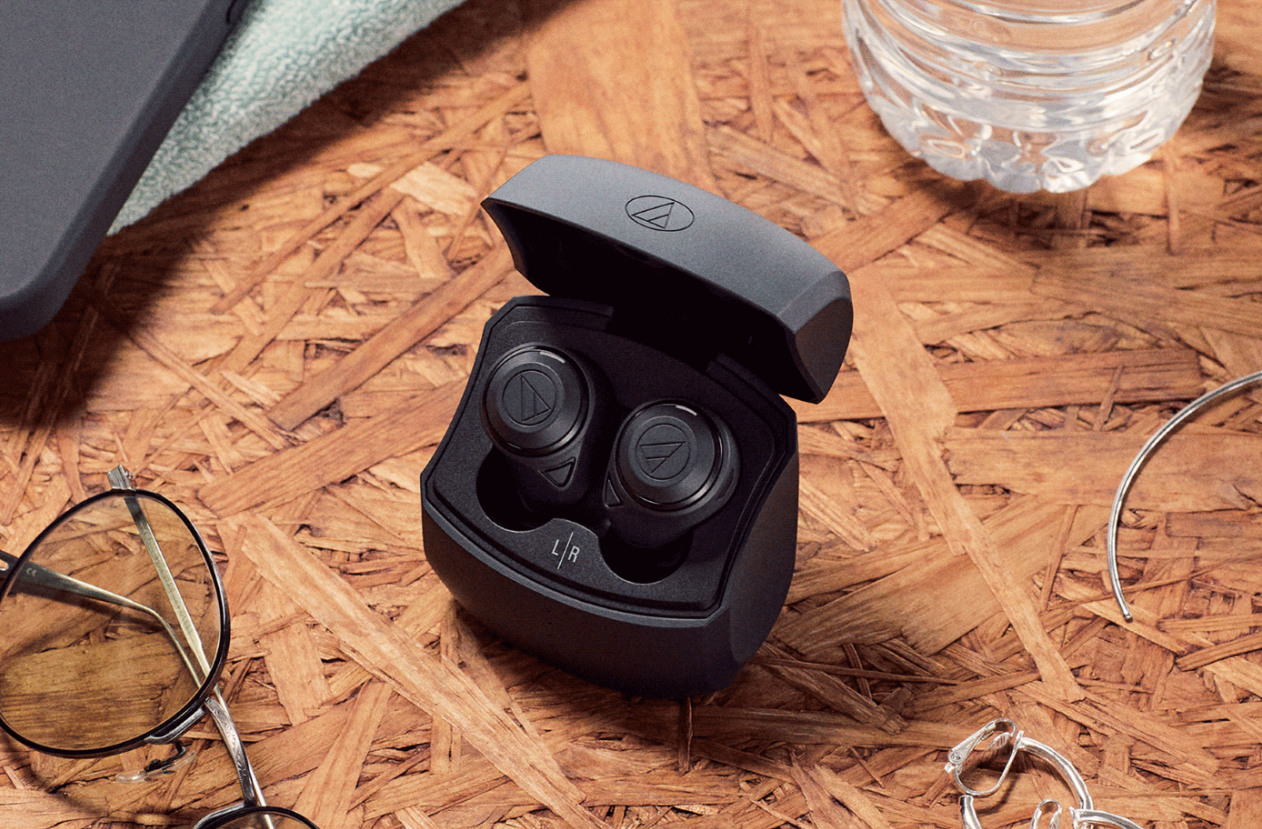 High customization through the app

Today we have the latest in Audio Technica’s line of truly wireless earbuds with the ATH-CKS50TW’s, for sale now at A-T for $149. We’ve tested out a few of their earbuds before (most recently the ATH-ANC300TW) but these have a new driver design as well as some fantastic app support. Before we get into it, the specs: The CK50TW’s are slightly larger than the previous ANC300TW’s but not as large as the older ATH-CKS5TW set. They still come in a snug charging case that connects via USB-C – the case is a bit more streamlined with rounded edges so it fits a bit better in your pocket than the 300TW’s, but is still quite bulky in comparison other offerings on the market. It’s a tradeoff for some great battery life, so keep that in mind. In contrast to previous versions of A-T’s earbuds that operated on 10 or 5.8mm, these run on specially designed 9mm drivers with what they call “acoustic ducts” on the back of them to provide full range and accentuate bass in the lower frequencies. The earbuds themselves even look like they have little secondary triangular speakers on them that upon unboxing I thought might be a button. This pair boasts 50 hours of total playback time, with 20 hours of charge plus an additional 30 hours available through the charging case. It charges up relatively quickly too, with the ability to gain up to 90 minutes of power with only 10 minutes of charge time. While we’re giving up the active noise cancellation, this is a huge boost in longevity over the ANC300TW’s, and is even an improvement over the ATH-CKS5TW’s 15 + 30 battery life, making it one of the best in class for how long you have to go before a charge.

Both earbuds operate independently with their own battery levels and sound, which is great since it allows for users to use only one earbud at a time without requiring the pair to be in to fully work.

For function, each earbud has a hard button on the side that provides different functions based on the frequency and length of the button presses, which are customizable in the Audio Technica Connect app.

The app really provides a lot more value with this set than previous versions of A-T earbuds. Not only can the buttons be customized for function, but it allows activation of low-latency mode to reduce lag while consuming media, and also equalizer adjustment and L/R sound balance as well. After some tinkering and finding the tips that fit your ears properly, they really allow a customized sound profile from user to user. Noise cancelling and hear-through modes are also configurable here, with additional features like measure ear shapes to optimize sound for services supported by Sony 360 Reality Audio.

Another quality of life upgrade is its compatibility with Google fast pair, which allows pairing through a Google account on Android devices via the A-T app. This allowed me to quickly get them up and running not only on my Samsung Note20 Ultra phone but also my S6 Lite tablet, and with the ability to pair to two devices at the same time, allow me to stay connected to both. This was an issue I had with my ANC-300TW’s when I took them to PAX East a couple months ago when trying to unpair and re-pair to my tablet so I could get an episode of Westworld in on the short flight to Boston.

We love the big battery life so the big case is understandable – that aside we only really had one other strike against the design – at the $149 price point, we think wireless charging should be a standard feature, as it comes with some models even at the $100 mark.

While having this paired to both my phone and tablet, we were able to test for both phone calls and media consumption, both of which performed very well.

The built-in microphone was fantastic for conference calls on my cell, where I sometimes have issues with other folks on the call hearing my voice clearly, and even voice recordings and notes to myself came out like crystal. Incoming audio was nothing to complain about either, with the only exceptions being when I hit a cellular dead zone. As far as media, the test was seeing lag while streaming from our favorite video streaming services. There was very little audio lag while we were checking out the new season of Stranger Things, but when we activated low-latency mode it was pretty spot-on perfect.

Listening to audio in your living room or office is one thing, but one of the real tests for earbuds is taking them to the gym – that’s right kids, my fortress of swolitude (thanks John Oliver). Hard buttons are always my preference here, as with some of the touch-controlled models out there I’ve experienced a bit of slip, even with IPX ratings. I got great sound, specifically in the low end as opposed to a lot of other earbuds, and even without active noise cancelling didn’t have an issue hearing my tracks over the noise of the overhead speakers and other folks pumping their various levels of iron.

Overall we got great sound, but did lose a bit of the noise canceling that we had with the ANC-300TW’s (though we kind of expected this since ANC literally stands for “active noise canceling”).

As far as we’re concerned these are the best truly wireless earbuds Audio-Technica has released to date, and some of the best we’ve taken for a test drive in general. Yes it’s got a big clunky case and there’s no wireless charging available, but with sturdy construction, solid sound, and battery for miles, the ATH-CKS50TW will serve you well at home, in the office, and on the road for $149.

What Do Pixels Taste Like? We Try Coca-Cola Zero Sugar Byte

June 9, 2022
Our Review Process
Latest Reviews
Where to?