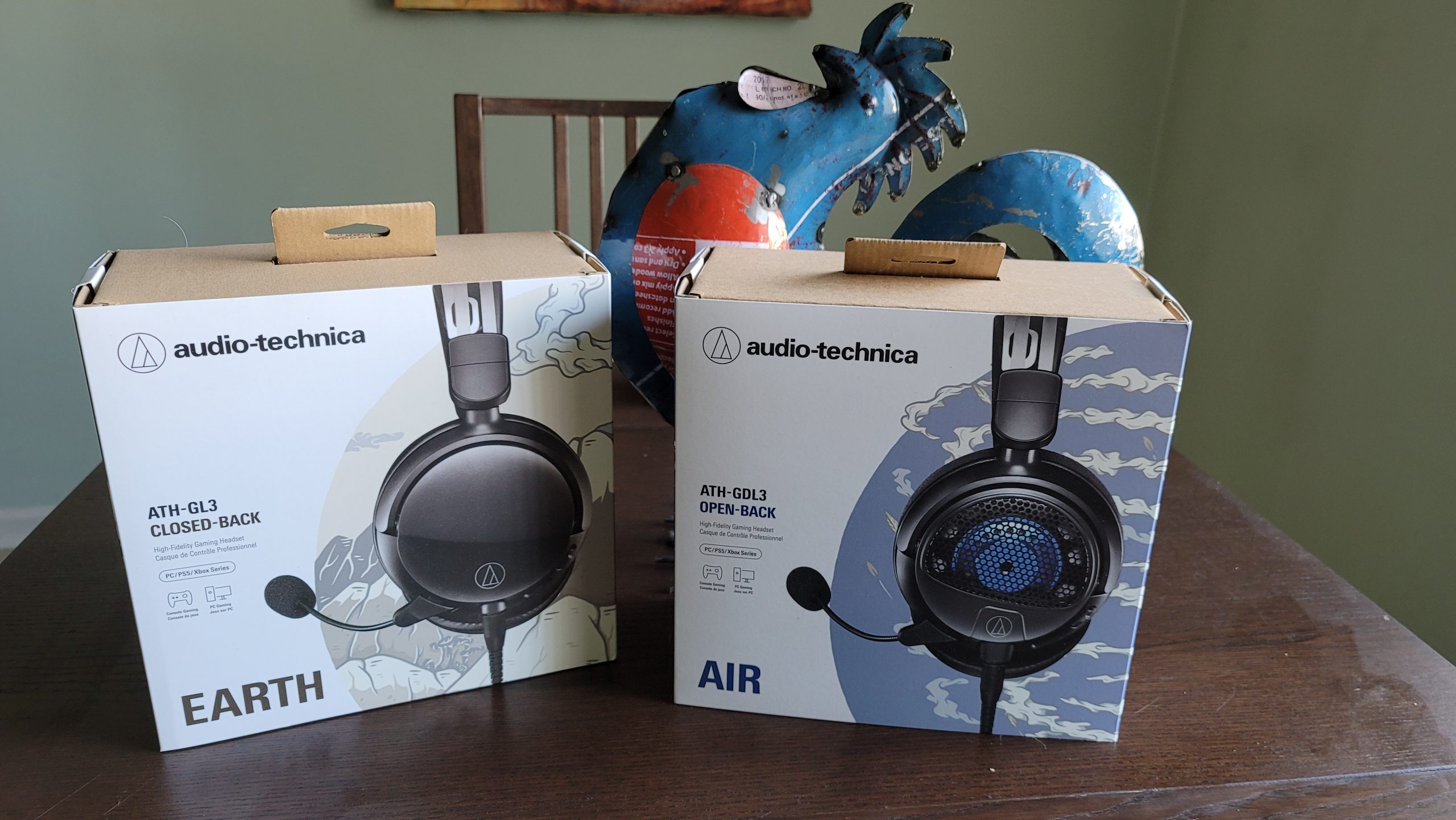 Subtle design works for gaming and the office

So today we get not just one headset but two! We’re taking a side by side look at Audio Technica’s pair of new gaming headsets – The ATH-GL3 closed back and ATH-GDL3 open back, which they have dubbed “Earth” and “Air” respectively. They may be packing very similar specs, but offer two different experiences for what kind of game you’re jumping into. They’re priced at $99 and $129, making them more affordable options than A-T’s previous generation ATH-G1/G1WL, which were priced at $169/$249. Before we jump in – the specs: Both models are the same in size and dimension, with all of the controls on the left earcup – the line in, removable boom mic port, volume dial, and mute switch. Instead of a leatherette covered single headband, we have a removable rubber head strap / cushion which works just right. The units are so light that anything more would have been overkill. There are some subtle differences between the two sets though. The Air has cloth covered cups and an open metal mesh so the blue-accented drivers are on display, with the drivers a bit further away from the user’s ears. The Earth’s cups have leatherette lining and solid plastic cover, with the driver positioning much closer. This design is part of what gives the open and closed back systems their different sound profiles and changes up the audio experience. And while we’re not saying the Earth is super heavy at 230g, the Air does go from light to superlight at 220g, 10g less.

Now as far as comfort for extended wear goes, we have to go with the Air. The superlight design in addition to the open-back cups mean there’s not blaring sound in your ears for an extended period of time, and the increased distance between the drivers and my ear keep it cooler and more comfortable for long gaming or media sessions.

Oh – and with the ever rising popularity of white gaming gear, both are also available in white. From the jump we know that we’re going to get two different sound experiences here – closed back headsets keep the player kind of isolated, doing more to block sounds from the outside world, with more of a hit on the bass profile. Open back systems allow sound to flow through and are, well – more airy, allowing you to still keep an ear on your surroundings and focusing on the environment as opposed to the player to provide a more organic sound and wider soundstage.

We can’t really in good conscience give these sets a 100% gaming review. If you’re using a PC or laptop and work an office gig you are going to be on calls, whatever the platform is. That’s what we use the mic on our headsets for far more than communicating in online gaming. We’ll be strapped in while our colleagues are using their integrated laptop microphones and speakers or some sort of one piece webcam and mic.

We found the detachable boom mic to pick up crystal clear sound, which works for us – the pure voices from the halls of Technical Fowl should ring no less than true to colleagues and digital adversaries alike. As far as sound, both got the job done – but due to the sound leakage, don’t use the Air to take work calls if there are people around. The chance of them overhearing things you don’t want them to is high.

For games, we ran both headsets on Battlefield V Year 2 Edition and Diablo III. For the former both sets did a great job, giving you either an isolated or open sound profile. Earth provided blockbuster movie-like sound whenever shells hit and good positional fidelity, but we preferred the Air, which gave us more natural sound, let us hear clear environmentals and approaching enemies in stereo. Granted, maybe I would opt for the Earth if I was online and really in a competitive match, but for single player where I also have to be able to hear my phone ring while still playing a game the Air was my choice. In Diablo the experience was quite different. This isn’t a game that heavily relies on environmental sound for gameplay or really requires a big open soundstage. The closed-back Earth set was perfect here, providing big sound where all the action is in a small space. The bass and mids felt good when the entire screen was filled with mobs and magic as the rift tiers went up. We didn’t like the Air on this one for the opposite reason. It really focused on the highs and we lost the low end, making the experience very chirpy and a bit too high for our tastes. We ran our console testing on our shiny new PlayStation 5 with a couple of games that we thought would give us a good read on performance – Devil May Cry 5 and Assassin’s Creed: Valhalla.

We liked the Earth for DMC5 because the game has a great heavy soundtrack that really adds to the fights. The bass hits and intense music really enhanced the gaming experience over the Air.

We had the opposite experience with AC:V – we loved the Air for this one to take advantage of its sprawling environment and large-scale sieges and raids. And honestly? There’s no bullets. We think that because ranged combat is the *swip* of arrows and not gunfire in a large scale, the Air doesn’t risk the same kind of super chirpy play we got from Diablo III by putting too much of a focus on the high end.

We love headsets with removable mics because we’re not always gaming online or sipping coffee on zoom calls. Without the mic both become lifestyle headsets for music or media without a microphone in the way.

Our standard test for movies is the Red Circle scene in John Wick, since there’s so many layers of sounds from high to low as Mr. Wick fights his way through in pursuit of Iosef. While both performed well, as in games they gave me different audio experiences. The Earth had more punch, hitting the bass from the club music hard as well as the mids of hand-to-hand combat without putting exclamation points on the high pings of gunfire. Otherwise it delivered a very good well rounded sound for action scenes and dialog as well.

The Air gave us a much lighter sound, dropping some bass hits but providing chirpy highs where the Earth did not. The overall sound was more like you were at the Red Circle as a spectator, with more power given to crowd noise and environment instead of the in-your-face action.

For music we like testing with Ramin Djawadi’s orchestral cover of The Weeknd’s Wicked Games from season 3 of Westworld. Both Earth and Air gave us good sound, but with similar sound profiles that we’ve already seen. Earth was more in your face with strong bass from the low strings and was more powerful in general. The Air felt like you were sitting in the orchestra in full arrangement, with the bass and low strings coming from the back and the higher violins coming from the front like in a concert hall. Both good, but again in different ways.

Audio Technica’s new gaming headsets gives gamers the option of different audio experiences for the types of play at an affordable price. The closed back GL3 Earth model is perfect for intense gaming and isolated sound. The open back GDL3 Air model provides a great light soundstage that while may not counter real world audio around you, will let you take in the environment for a more natural sound.

While Audio Technica produces some truly high end audiophile gear, they’re relatively new to the gaming space, but with the Earth and Air, we think they’re starting to hit their stride.

March 10, 2022
Our Review Process
Latest Reviews
Where to?