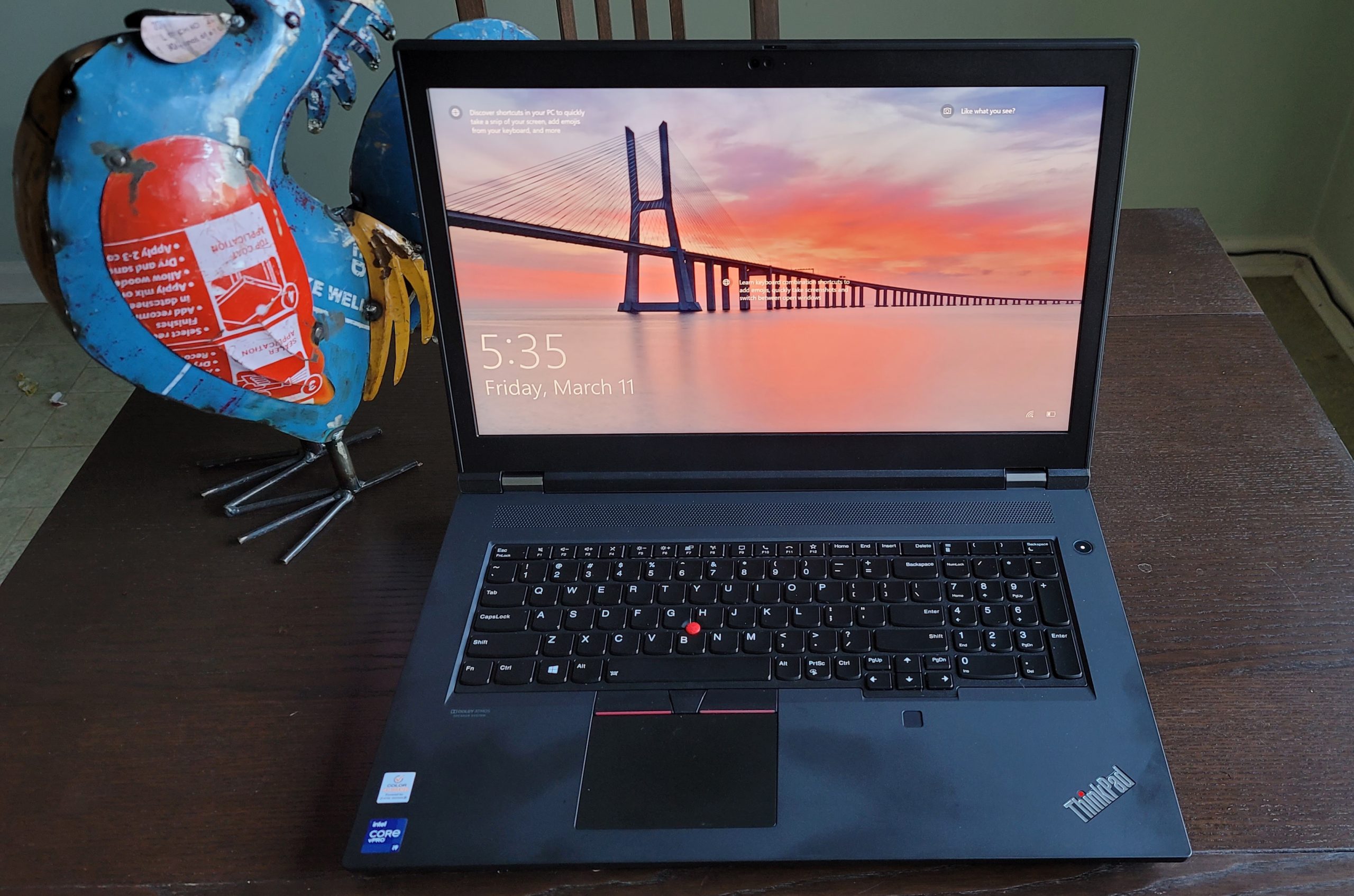 Lenovo’s new machines for 2022 will be released over the next couple of months, but until then we still have a monster of a mobile workstation to check out – the ThinkPad P17 Gen 2i. We don’t exaggerate when we call this 17.3″ desktop replacement a monster. Its massive size allows the packing in of some ridiculous components, and is a definite spec upgrade from the first generation. To that end, here are the specs of our test machine: I use an X1 Carbon Gen 8 for work, and putting it side by side with this beast was quite a sight to behold. The P17 is a mobile workstation with desktop power, packed in a huge rugged case. There’s not much to say about the design past its classic ThinkPad looks, but it does look a bit oldschool without superthin bezels like its ThinkPad cousins and its, well… hugeness. Aside from aesthetics this behemoth starts at 8 lbs and measures in at 0.9″-1.2″ x 16.3″ x 11.0″.

Opening it up gives you full keyboard with numpad, and a looooot of cushion surrounding it. The touchpad has three hard buttons for clicking if you’re not a tapper. On the right is the power button, with the fingerprint reader under the keyboard. Above the keyboard is an up-firing speaker which produces some decent sound for when you’re in the mood to take a break from CAD to stream some movies. The standard screen is FHD, but we had the upgraded 500 nit 4K screen with HDR 400. And it’s beautiful. It’s pre-Lenovo’s shift to 16:10 screens, but still, the 3840×2160 is bright, has great color representation working in Adobe as well as when you’re running games. Combining this screen with an i9 and RTX A5000 allows it to run pretty much anything with great visuals, as you’ll see with our performance testing below. On the top of the screen is an optional hybrid IR camera with a privacy shutter.

With this kind of massive size, ports aren’t a problem. On the left we have the headphone/mic combo, HDMI 2.1/2.0, a always on USB 3.2 Gen 1, and the optional WWAN SIM slot. On the right is another USB 3.2 Gen 1 and an SD card slot. The back is where the bulk of the power is, with an RJ45 port and 3  x USB-C ports (2 also serving Thunderbolt 4). The USB-C’s also make it easy to hook up a VR headset and delve into virtual worlds or virtual design. Nope, definitely don’t regret that joke at all.

But in reality this system does have a lot of models to fit budget and spec. The lower end i5 machine we mentioned retails for $3,299 (currently $1,869) but at the top end (like our test machine), you’ll be set back about $8,800 ($5,119 right now at Lenovo). This machine can serve anyone from users that only need Photoshop up to engineers that are running huge projects in SolidWorks r 3dsMax.

In short – even though it’s designed as a workhorse it can also game like a Legion :

3DMark Night Raid: Night Raid gave us 27,452, which is about half of what we expected. Sometimes non-gaming cards, especially newer ones, can go unrecognized by gaming benches. In our expertise this should have hit about 50-55,000, ranking with premium gaming desktops.

3DMark Port Royal: This ray-tracing test came back with a 6,577 beating the high end gaming PC’s, falling short only to “premium” gaming desktops. Ray tracing and fancy shadows won’t be a problem here.

Procyon Photo/Video Editing: The test for Adobe Photoshop and Lightroom gave us a 7,083, and we got a 6,580 for testing Adobe Premiere Pro. These are the highest scores we have gotten on the Procyon benchmark for artists and photographers. This was matched only by the Xeon-powered P15 Gen 2, which also ran an RTX A5000.

The P17 Gen 2i handily scored high on the pure performance benches we threw at it, and that was supported with our gaming tests below. Shadow of the Tomb Raider: We found that we could accompany Lara on her adventures on this machine with identical performance as Lenovo’s 6th Gen Legion 7i, which is 100% gaming tuned with an RTX 3070. Final Fantasy XV: Even without a gaming dedicated GeForce, the A5000 will allow Noctis and his crew to still run around in style, even in 4K.

It’s not specifically made for it, but this machine can game on Legion level as well as being able to pass the mark for artists and engineers running Adobe Creative Cloud apps or CAD software.

The whole time it never got super hot and the fans didn’t start spinning up like a jet engine.

How much battery life can one really expect with specs and a screen like our test model has? 15″ Gaming machines with RTX 3-series cards can burn out in four hours or less. Lenovo advertises 8 hours of battery life, so we were curious how close we would get. With the screen brightness at 60%, battery set to “better battery” in windows, and running on wifi, we started our tests. We started with some media consumption, streaming three episodes of Netflix’s improv comedy Murderville, and still found we had plenty of battery to go. We continued with a couple hours of web browsing and writing at the home office, packing it up to take to the office office. Much to the surprise of onlookers on the sheer size of the thing, work continued with doc writing and general, you know, IT stuff. After bringing it back we opened it up again just to check some emails and type up this post until we were out of juice. And it was a surprise to find we got about 6 hours and 45 minutes. Impressive for these kinds of specs.

Lenovo’s ThinkPad P17 can replace a desktop as a mobile workstation and can be configured from what can be called “standard” specs up to a level that can run pretty much anything you need it to. The top end specs are also more than enough to virtualize with Hyper-V if you need to run multiple OS environments. And while it’s not built for it (please **do not** buy this as a gaming rig) it easily pumps out the FPS with ray-traced shadows on full. It’s got a hefty pricetag, but we can’t argue with performance.

March 11, 2022
Our Review Process
Latest Reviews
Where to?