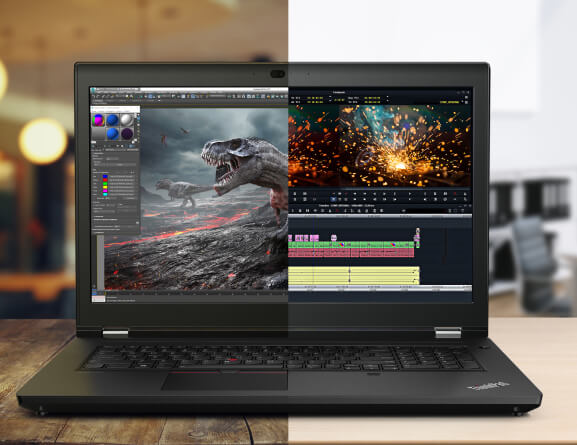 Excellent performance for both pro and gaming use

Today we’re taking a look at Lenovo’s supercharged ThinkPad P17 workstation, aimed at high-powered CAD and design. Far from lightweight and able to pack up to a Xeon W-10885M and NVIDIA Quadro RTX 5000, this big boy can be built out to an $11k monster to process most things you can throw at it. Here’s what we had in our review model: If Lenovo’s traditional ThinkPad design we’ve come to know and love over the years is Bruce Banner, the 17″ P17 is the Incredible Hulk. Bigger and more powerful in every way, the P17 is a behemoth of a mobile workstation that can more than replace your desktop. Big enough to stand on its own without a need for a dock for ports, the “low end” spec of this unit weighs in at 7.7lbs. And that only goes upward. With a footprint of 16.38″ x 11.06″, a laptop that’s 1.31″ thick is a far cry from the “thin an light” philosophy that places a premium on mobility and travel. Check out the images and you can see the P17 in comparison to Lenovo’s 15″ Legion 5i for size.

BUT WE STILL LOVE IT. This machine was made for engineers, IT pros, and power users as opposed to those that favor sleek mobility. And we love power. There aren’t thin bezels around the display panel, there’s plenty of space for your writs to type, and there’s a full keyboard complete with numpad. A signature TrackPoint accompanies the same keyboard we’ve loved for a long time, as well as three hard buttons on the touchpad to make clicks easier than blind taps. Just under the keyboard is a biometric scanner for additional security. And as a 17 incher, the P17’s heavy frame is matched by the power it packs. The Intel Xeon and NVIDIA RTX Quadro inside are high-end components that are built to handle whatever 3D rendering and design you need to do – it carries ISV certifications for AutoCAD, 3dsMax, Maya, SolidWorks and 14 other design software ecosystems. Adobe CC isn’t on the official list, but this has no issue handling that either, and can blaze through video processing in Premiere or any swaths of images you have in Photoshop. Color representation is great too on the PANTONE color-calibrated 500-nit UHD screen with HDR and Dolby Vision.

This is a high-grade processor with a high-grade professional video card, which means it will also double as a very capable gaming machine, as may be the penchant of those engineers and power users who run the P17. To begin with we ran a quick PassMark test to see how this system overall benches – an overall score of 7418 put it in the 90% percentile versus all of the machines in the wild. For reference, my personal Legion 5i (i7-10750H/GTX 1660 Ti) scored a 4321. Just as an overall snapshot we’re looking at a high-tier laptop.

The only concern I had when running my normal laptop tests was battery life. Lenovo advertises up to 9 hours for this model, but that’s probably using mid-range specs. My review model is pretty close to the top end with the higher-powered Xeon and RTX Quadro 5000 so expectation was that number to be a bit lower. The P17 options range from what I have all the way down to a 10th-gen i5, Quadro T1000, and FHD screen.

So let’s be real to begin – there’s nothing I do that was ever going to put a serious tax on this system, so I did what I could to see battery life. With the majority of my work being doc writing in Microsoft Office, video calls on Zoom, I went heavy on consumable media and video in addition to writing this article, trying to keep as many tabs open in Google Chrome in the background downloading large ISO’s. The heaviest thing I had was refreshing massive databases using Power BI and there was definitely a marked improvement over my own Legion 5i.

One window was also running The Hateful Eight on Netflix which also let me experience the quite decent audio through the Dolby Atmos system. Somehow Tarantino always works for laptop reviews. It was definitely far heavier than I was used to in the computer bag, so it is a bit tougher to travel with over Lenovo’s thinner systems.

When all was said and done, the battery life was about as I expected and I was running on fumes at the 4 hour mark. With these kind of specs, that wasn’t surprising. Pumping out that kind of power also pumps out an equal amount of heat, so sometimes the fans did go into overdrive to jet out the hot air and keep the temperature to about 63° C. While these numbers weren’t surprising, they do put scenarios in my head where someone could forget their adapter and be stuck with 4 hour run time at the office. Not a huge concern during COVID where a lot of us are working at home, but something to think about.

It’s a great build and my only real nitpick is that the keyboard flips the function and control keys on the left.

This machine is aimed at pros that need high-grade computing power, and comes with the bonus of being able to throw down some decent game. We ran the P17 through our normal battery of gaming tests and what we found was performance in line with laptops running i7 / i9 / Ryzen 9 5000 series processors and NVIDIA RTX 20 and 30-series cards.

(Look I’m not saying drop this kind of cash for a Quadro RTX card, but if you happen to have a laptop running a Quadro RTX you might as well give it some full spectrum use.) The Shadow of the Tomb Raider benchmark showed us the Qaudro’s chops on multiple graphics settings with ray-traced shadows both off and on. If you’re looking for pure framerate, running it in FHD with standard shadows on “ultra” peaked at over 160 frames per second. Naturally, 4K with ultra ray-traced shadows proved a bit much. Here’s what we got:

That’s some pretty solid gaming performance for a laptop you probably bought to run AutoCAD.

Even at 4K UHD you can still get a full FFXV graphical experience. After these two tests it’s needless to say that more mainstream games like World of Warcraft and Overwatch run without a single issue with everything turned all the way up.

As far as a straight DirectX 12 test, the P17 scored an 8,321 on 3dMark’s Time Spy test, again falling in line with gaming machines running 10th/11th gen Intel i7’s and RTX 20-/30-series cards. The Quadro RTX 5000 does just as well if not better than their GeForce cousins.

But seriously, we will repeat ourselves again when we say do not buy a P17 if you want a gaming laptop from Lenovo. For that save yourself some money and go with one of their Legions. The P17 is a beast that chews AutoCAD and SolidWorks first, and Battle.net and Steam second.

Lenovo’s P17 is a top-flight workstation that can be cranked up to power levels beyond what the standard user will need. It’s tuned for 3D and CAD software, proving to be a great tool for engineers, architects, IT pros, and designers that need high-power design, rendering and/or compiling. Starting at $2,629 with a 10th-gen i5, Quadro T1000, and FHD screen (on sale now for $1,524), the version we reviewed here can set you back around $8,000 for the top-end Xeon and RTX 5000. This makes it a great choice for businesses that need solid workstations for their technologists. Right now P17 builds are about 40% off from Lenovo, so if you need the power you can put together a build here at tremendous discount. My build was running Windows 10 Pro, but as with many Lenovo systems over the last couple of years, the P17 can also come preloaded with either Red Hat or Ubuntu flavors of Linux if you are running an open source shop.

And while it’s not designed to be a gaming laptop, the high-end specs allow this to double as a gaming machine. For the the third time, since we really must stress this, the Legions are still the line you want if your focus is gaming and not running high-powered design software.

Our verdict? The P17 can be a run of the mill workstation, but it’s meant for power not suitable for amateurs.

February 22, 2021
Our Review Process
Latest Reviews
Where to?