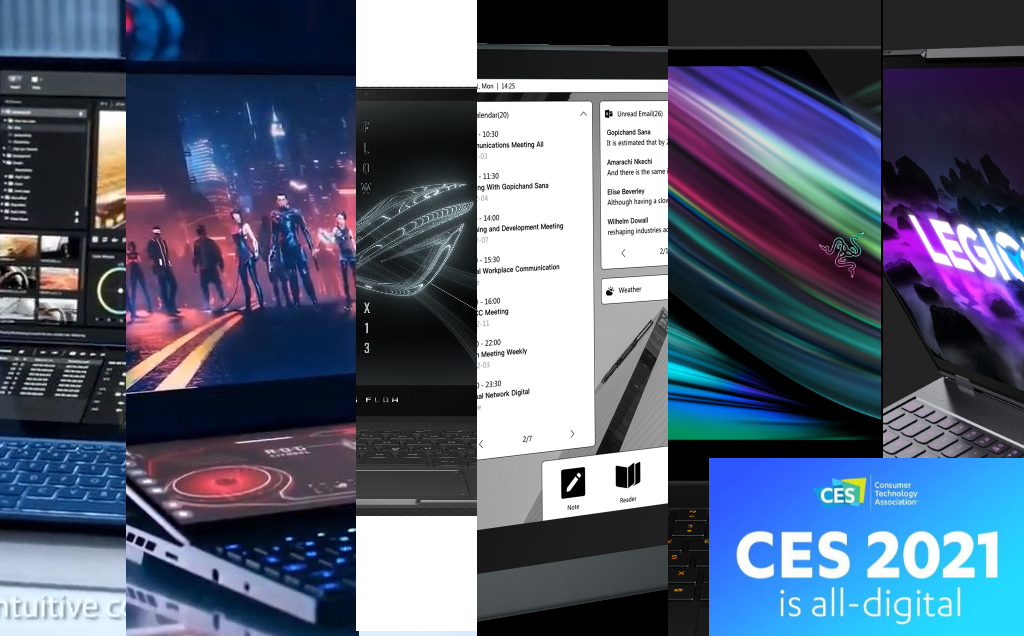 I mentioned in my last CES 2021 post that I would do a separate entry on laptops and as promised, here it is. As I mentioned then, there’s a definite trend overall towards AMD’s Ryzen 9 mobile processors in combination with NVIDIA’s RTX 30-series graphics. We saw a lot of great gaming options, with a couple of units being more tuned for business or crossover laptops. Once again we weren’t able to get our hands on these physically since CES was virtual, so our “favorites” are based on new features or designs that caught our fancy. So, without further ado – Asus’s “Duo” laptops might feature one of the coolest things we saw show-wide. With the continual intention of providing more and more screen space without increasing form factor size, they went ahead and lowered the keyboard, popped the touchpad to the right, and added an automatically-lifting second LCD panel with touch beneath the main display. While focused on different markets, both of these systems mean business. The ZenBook is a studio laptop for creators, allowing the user to use the included stylus to boost their artistic productivity. Tuned like an artist’s palette for Creative Cloud users and featuring Intel 10th-gen i9’s and NVIDIA GeForce RTX 3070 graphics, the ZenBook Pro Duo provides an impressive mobile studio for the the digital artist. That leads us to its gaming-tier cousin, the ROG Zephyrus Duo 15. It also packs dual LCD screens and RTX 3070 graphics with 4K specs for creators, but uses AMD’s new Ryzen 9 5900HX for processing power. For gamers the screen is tuned down from 4K to an FHD panel, but at 300Hz with a 3ms response time. The second “ScreenPad Plus” screen isn’t just to be used as a second screen for gaming and streaming, but lifting the screen also allows additional airflow through the laptop. With built-in ROG customization and tuning, the Zephyrus Duo positions itself as your complete mobile rig with a side of screen real estate for productivity.

But… you will pay for it. You can get a non-RTX non-Pro ZenBook Duo for $1,299 if the second screen is all you covet, but preorders for the NVIDIA-packed ZenBook Pro Duo and ROG Zephyrus Duo 15 will respectively set you back $2,999 and $2,899. Asus scored twice with us this year on design. Moving to the ultraportable, we’re shrinking down to the X13 Flow. With AMD’s Ryzen 9 5980HS for processing, one might think that its NVIDIA GeForce 1650 is a diminutive choice for graphics, but there’s more here than on paper specs. Battery life is a priority with this model, allowing not only 10 hours of use per charge, but quick charge capability to get it from 0 to 60% battery in 39 minutes. The Flow X13 also features a flip design that allows the screen to be flipped 360°, letting you choose between a 120 Hz FHD panel or a 4K Gorilla Glass panel supporting both touch and stylus input.

Pairing the Flow X13 with the XG Mobile external GPU is where this little unit goes into overdrive. With options up to an RTX 3080, the XG Mobile gives this tiny unit full-size RTX graphical power. This lets you use the Flow X13 as an ultraportable machine providing not only gaming on the go but some productivity and everyday use as well. And when you need to drop the hammer for some high-end video processing, hook it up to the XG Mobile. Pretty good option for folks that want the best of both worlds. Lenovo’s flagship Legion 7 makes the jump to AMD’s new Ryzen 9 laptop chips for their core processors and feature the latest NVIDIA RTX 30-series graphics. And on this new version, size matters. Legion 7 screens have been bumped up from 15.6″ to a full 16″ with faster and higher-res specs. At 2560×1600, we get a 165Hz refresh rate and 500 nits with Vesa DisplayHDR 400 and NVIDIA G-Sync. This is a vast improvement over the last generation of Legions, which gave us 15.6″ FHD screens at 144Hz. While its subtle design will allow for use anywhere, if you want to pop some more color and style into it then you can do so with built-in programmable Corsair iCUE lighting.

We like the 16″ form factor too. It may seem like a small change but that extra fraction of an inch works out to an 11% increase in screen real estate and field of vision. They went the same route with their new Legion 5 Pro, with the main difference between it and the 7 being Ryzen 7 processors instead of Ryzen 9. However, the 5 Pro is also available in a cool white chassis too.

While the Legion line has been making improvements with every generation on performance boosts, the 2021 models feature the new AI Engine – their combination of hardware, software, firmware and driver support to help boost performance by balancing resources.

Lenovo – ThinkBook Plus Gen 2 i So this isn’t brand new this year, but it doesn’t make the idea any less cool. The ThinkBook Plus Gen 2 is a thin and light business productivity laptop without superhuman specs like their Legions. The twist is the laptop’s cover, which is actually 12 inches of usable monochrome e-ink display. Users can use this extremely-battery-light display to read like on a big Kindle, or to just take a look at email or weather or other apps you have running without having to open the machine. On the color side of the monitor, we get a 13″ 2500×1600 resolution screen, with optional charging pad giving 15 hours per charge, upping it to 24 when only using e-ink mode. That doesn’t mean the specs are as low-power as the e-ink screen – the ThinkBook Plus Gen 2 can be equipped with 11th-gen i7 processors and up to 16GB or memory.

The ThinkBook Gen 2 is multiple form factors in one, and we think that’s quite cool.

Razer – Razer Blade 15 (Base is our favorite) We’re talking specifically about the 15″ model because hey, we’ve got places to go. The Razer blade has been a mainstay of gaming laptops since their first iteration years ago, and this year’s models at CES are a slightly slimmer refresh of that familiar form factor. Razer is giving their customers a lot of options between the base and advanced models of the laptop, with the Base 6-core i7 and NVIDIA RTX 3060 jumping up to an 8-core i7 and RTX 3080 on the advanced model. This also includes a difference in screens, ranging from FHD 144Hz all the way up to 4K OLED touch. If you want super fast over hi-res, then 360Hz FHD screens are also available. And that’s… well, just blisteringly fast.

The spec that makes us favor the Base over the Advanced model is a choice that maybe isn’t as important to some of you – and that’s the choice between an RJ45 ethernet on the Base versus an SD card reader on the Advanced. Now we love having card storage available and have even listed the lack of one as a con on some of our laptop reviews in the past – but give me an RJ45 that also allows me to plug into networks and use this for my IT Pro day job, then very cool. Overall the RJ45 as well as the lower end screen and specs consuming less power for more battery (as well as lower price) is the way we’d go. Because if I really want to, I have plenty of monitors to plug into, and either way we have RTX 30-series graphics.

So there are our overall favorites from this year’s CES – let us know if you saw one that should have made our list!

February 8, 2021
Our Review Process
Latest Reviews
Where to?