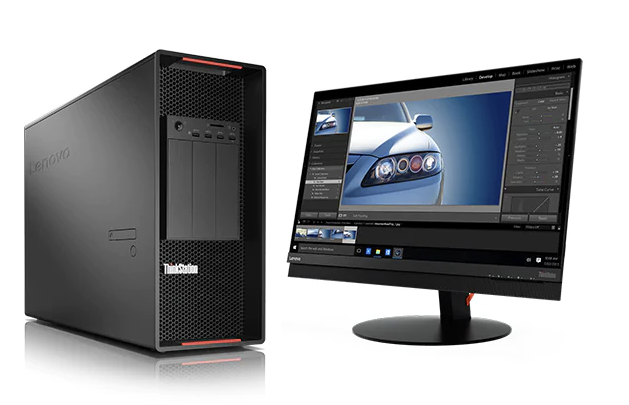 Today we’re looking at Lenovo’s ThinkStation P920, which they conservatively calls a workstation. The power inside this thing would be enough for most small businesses to use as a server with virtual instances, or allow an engineer to likely render the earth and/or create some pretty stunning VR environments. Powered with NVIDIA’s Quadro line of professional graphics cards and up to two Intel Xeon processors, it’s easy to spec this one out to a nearly $100k machine for those that need the power. Ours was some of the way to that top end mark and we had it dual booting Windows 10 Pro and Ubuntu, so we were able to get some full scale readings from our test model. A Xeon Silver 4110, Quadro P620 and 8GB RAM will start you on the low end at $2,783 and still be good for a lot of what you want to do – but here’s what we had to work with: The P920 is pretty compact for what it’s capable of doing, but upper-tiered models do carry some significant mass. At max spec (all the everything), this beast weighs in at just a shade over 81lbs (37kg), which is in fact more than most commercial tower servers on the market today. And for those trying to do the math on a power draw, it’s packing a 1400W power supply to keep it up and rolling. After recently retiring an HP ProLiant DL360 Gen 8 with all the bells and whistles at the office, there’s one thing we are very thankful the P920 has – carry handles. Lenovo’s design team knows that it’s not always the weight but the form factor that makes something tough to haul, and cuts in the rear and front top of the chassis made this much easier to carry and maneuver from one place to another, even when a flight of stairs was involved. But the carry handles weren’t the only thing that had the user in mind – a lot of the hardware functionality of this machine is quite literally forward facing, pushing many of the ports and drives to the front panel of the machine for ease of use. In addition to just the power button, the P920 comes standard with 4 USB 3.2 ports up front (you can add 2 additional USB-C Thunderbolts), along with a 9-in-1 card reader (15-in-1 optional) and mic/headphone jacks. It also has three 5.25″ bays, one of which was occupied by a DVD drive on our review model.

On the back there are even more – it comes standard with additional audio in/out, 4 additional USB 3.2 ports, 2 USB 2.0, 2 gigabit RJ45’s, and even 2 PS2 ports. Optional adds include a USB-C Thunderbolt, serial/parallel ports, e-SATA, firewire, and 2 more gigabit network ports should you need them. I never knew I needed to have this much connectivity, but it sure does feel nice.

And that doesn’t count the ten (10) graphical ports from the twin RTX 8000’s, with a variety of HD, DisplayPort, and USB-C. From a maintenance perspective, Lenovo does a great job granting easy access to components to switch out or even just get to. Popping a lever brings off the side panel, and a series of easily marked pull switches allow the air baffles to detach. This makes it super easy to reseat processors, blast the insides with some compressed air, or in all honesty, just to admire the shiny RTX 8000’s nestled in the mainboard.

As a bonus feature, as would most machines using a 1400W power supply to run, it makes a nice space heater while in use and I was actually able to turn the heat down while using this in my office as it kept my test desk nice and toasty.

So you know, options. But in the words of Kanye West, no one man should have all that power.

That said, we tested our more “modest” $40k build and still couldn’t find anything it couldn’t do. The big thing here was testing its 3D capability, so we ran it through a couple of 3DMark benches, namely Time Spy and Port Royal to test DirectX 12 as well as ray tracing capability. We added CineBench and LuxBench to round out the testing for rendering and graphics work.

We really wanted to run some benches on SolidWorks, sorry to our engineering kids, the $4k license price tag just to run a bench seemed a little steep for us for running benchmarks. So we turned to gaming for additional testing.

**As a disclaimer – we do not endorse buying a P920 with dual Quadro RTX 8000 48GB cards with NVLink to play games on. It is meant to do different professional things you probably have no need for, and just the video cards will run you $20k**

… but if you already HAVE them, nothing wrong with some bonus gaming performance, right? We did the same thing with the P17 laptop (single Quadro RTX 5000) we reviewed a couple of weeks ago, so we expected a lot from our particular loadout. Plus, it’s still a great way to benchmark a machine’s video and 3D capabilities. Cinebench R23 came back with a score of 16,534, with the Xeon Gold beating AMD’s Ryzen Threadripper 1950X by a small margin. These are both 16 core / 32 thread processors and dwarfed other processors at 12 cores and below. The only procs to outscore it were Intel’s Xeon W-3265M and AMD’s Ryzen Threadripper 2990WX, but these are 24 and 32 core processors, so that wasn’t too much of a surprise. This was still rated as one of the best processor performances.

LuxMark gave us 90,764 on Luxball, 61,352 on Neumann TLM-102, and 19,188 for Hotel Lobby. These scores line up with with the middle-to-high range of a Geforce RTX 3090 for a level of comparison to those whom Quadros are foreign to. No issue rendering anything during these tests.

3DMark may be focused more on gaming, but it still can be a good guide for rendering. The P920 scored a 15,628 in Time Spy for DirectX 12 and 15,987 in Port Royal, which is focused on ray tracing. This benched them better than 99% and 96% of all systems in their database respectively. For comparison, this beats most systems running top-end 10th gen i7/i9 processors witrh Geforce RTX 3090 cards.

As far as other machines also running dual Quadro RTX 8000’s, the P920 was only beaten by custom builds on ASUS ROG boards running an AMD Ryzen Threadripper 3990X.

On the gaming side for some additional testing we ran the P920 through the Shadow of the Tomb Raider and Final Fantasy XV benchmarks, and as expected there was zero disappointment. Here’s what we got: Shadow of the Tomb Raider

The game looked sensational in 4K with ray-traced shadows turned all the way up, and 90 fps was the average for the test. There were some scenes where it peaked at over 100, but more impressive was the visual quality of light and shadows with the ray traced shadows up on max. We got great results for FFXV – the benches showed that even with settings turned up at 4k, we would still be able to get a great gaming experience. Watching the benchmark legit made me want to dust it off and run through with Noctis and his buddies again. Here was how it fared:

The 4K test looked super good, with the most granular and fun detail being the tiny flecks of dirt and reflections in the Regalia’s paint job.

For me personally, I have no idea what I would need this level of power for as a workstation. It has more than enough power for the highest-end 3D, VR, and CAD work over multiple displays. The P920 will give you what you put into it, starting from single-proc single-GPU configurations up to configurations that might be able to bend time. It crushed benchmarks for pro 3D performance and for those that want some bonus gaming, it was able to crush that too. 2 48GB cards, 2 server grade processors, and 192GB of fast memory will tend to do that for you.

Let’s not forget the server capabilities of this so called workstation as well. This can easily be used as a server running a couple of VMWare or Hyper-V instances at a lower cost without splurging $20k on pure GPU power. It can have enough cores and memory to be able to easily manage that for a single site business or as a site server in a multi-site infrastructure.

Even on a relatively modest engineering budget this is still a good under-$5k-option, since its form factor allows for upgrading as you need more power. That’s the great thing about desktops – if done right, they can grow with the user. So while the price tag might feel high, it does come with some staying power.

In short, this is unquestionably a top-end workstation.

Razer Sets Sustainability Goal to be Carbon Neutral by 2030

March 12, 2021
Our Review Process
Latest Reviews
Where to?