What Do Pixels Taste Like? We Try Coca-Cola Zero Sugar Byte 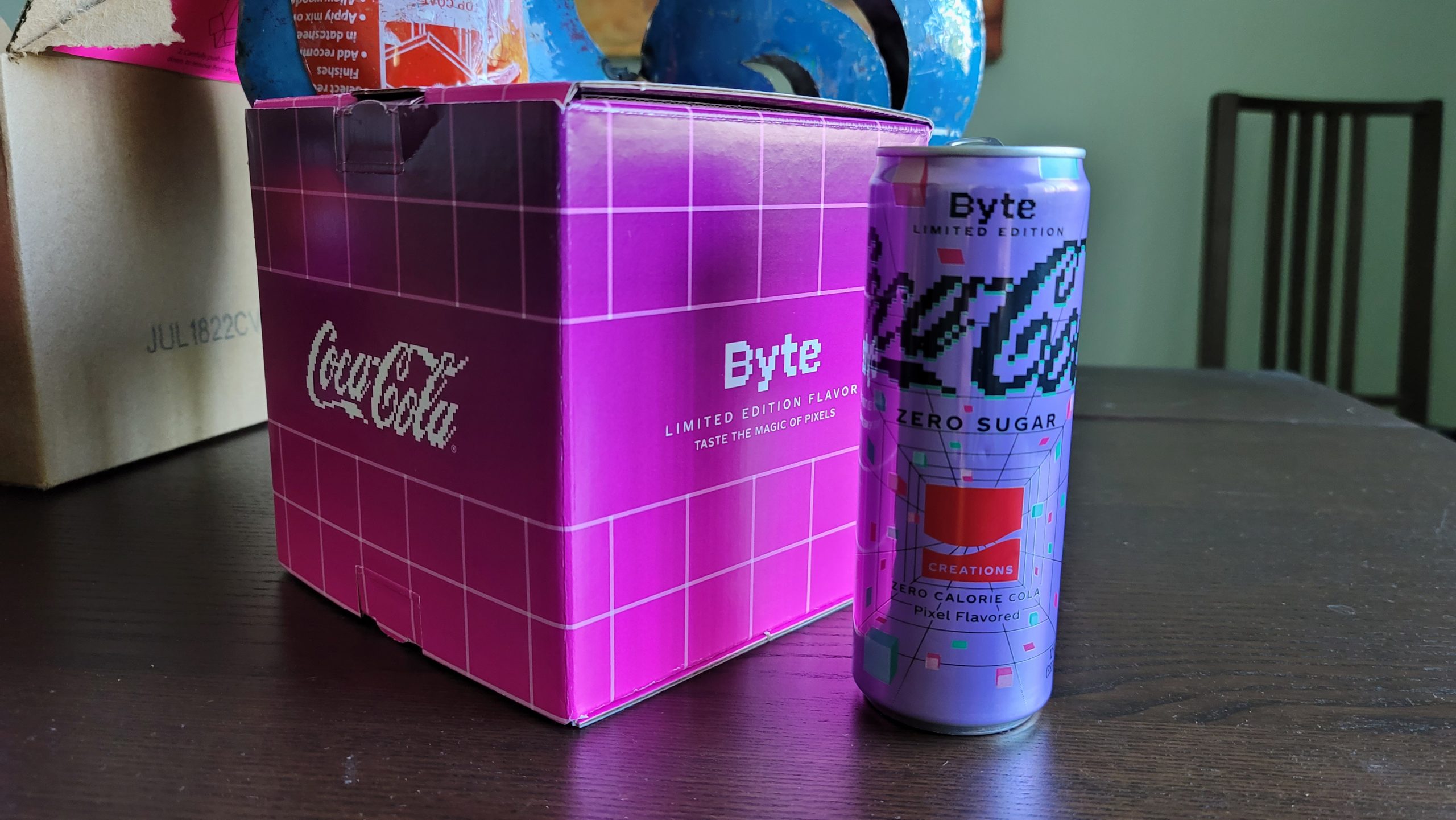 We love a good carbonated beverage here in the hallowed halls of Technical Fowl, and specifically enjoy those of a sugar free variety. And we’re happy to see Coca-Cola expanding on their traditional varieties with some ambitious and experimental flavors with their limited edition creations. Earlier this year they released their “space inspired” Coke Starlight, which while being zero sugar was still one of the sweetest things I had ever imbibed. It was a weird combo of cola, raspberry and cotton candy for me. Which I guess makes sense, since there’s some scientific evidence supporting the idea that space is raspberry flavored. While Starlight was (is) available in coolers at your local gas stations and convenience stores, their next and most recent limited edition can only be got by ordering online. Available in 2-can special edition boxes for $14.77, Coke Byte is a zero sugar cola that’s advertised as “pixel flavored,” and according to them, “Its bright upfront is reminiscent of powering up a game, and it’s refreshing finish makes for a perfect gaming companion.” That and the packaging gives me that old school “VGA graphics” sort of feel.

It comes in a bright neon pink and purple cube and comes with 2 cans, a pixelized sticker, and access to an AR game. So as a gamer and and all-purpose nerd that grew up in the 80’s and 90’s with an NES playing the first Final Fantasy ever made, I was tempted, nay – obligated – to place and order and give it a try. Attacking both the player 1 and player 2 cans – tasting not only via full sized sips but some sommelier-level spins detecting the nose and finish.

And in the end… we couldn’t really put our finger on it.

There’s that cola flavor that every version of Coke has, but there is a pretty complex flavor profile woven through it – I got berry fruits, I got citrus, I got a little bit of candy in there too. All combined (and this isn’t going to be something a lot of you can relate with) it tasted like… the eighties? Back then every drink was jacked up with loads of sweetener there was a generic “sugar” flavor, and Byte captured some of it while still being able to be a sugar free drink. The unidentifiable combination of fruit and citrus flavors reminded me of circus peanuts candy crossed with pixie stix – heavily sweet with an artificial fruit flavor on the regular drink test. But when we really got the nose and the finish I did pick up a mild bitterness that I thought was due to the artificial sweetener. But after a couple more detailed swirls and sips I weirdly got… Angostura Bitters? After both cans were done, our verdict here at Technical Fowl is that we like it – and while it not may be something we would be able to chug just hanging out, we have to admit Coke was right in it being a flavor that is a good gaming companion.

Beyond that, I find it a great beverage companion nice and cold while taking in the new season of Stranger Things. So whether you’re looking for a collector’s item or just a limited edition drink, we’re going to say give it a try.

The company line is: “the first-ever Coca-Cola flavor born in the metaverse, Coca-Cola Zero Sugar Byte celebrates the everyday magic of pixels coming together to facilitate digital connection.” And weirdly, that’s kind of the experience we had. Is it what pixels taste like tough? I’m gonna go with no, and I don’t think I need to crack open any of my LCD’s or lightly sauté a cathode ray tube to be able to confirm that.

OK so here’s what we came up with – Coke Byte is a cola beverage that crosses the 80’s candy memories from your youth with ordering an Old Fashioned at the bar as an adult. We find it’s an appropriate meta flavor profile for the first drink that claims to be born in the metaverse.

You can order yours for a limited time at Coke’s official website, along with some Coke Byte branded gear. We’re definitely ordering some more for our office fridge here, that’s for sure.

June 17, 2022
Our Review Process
Latest Reviews
Where to?