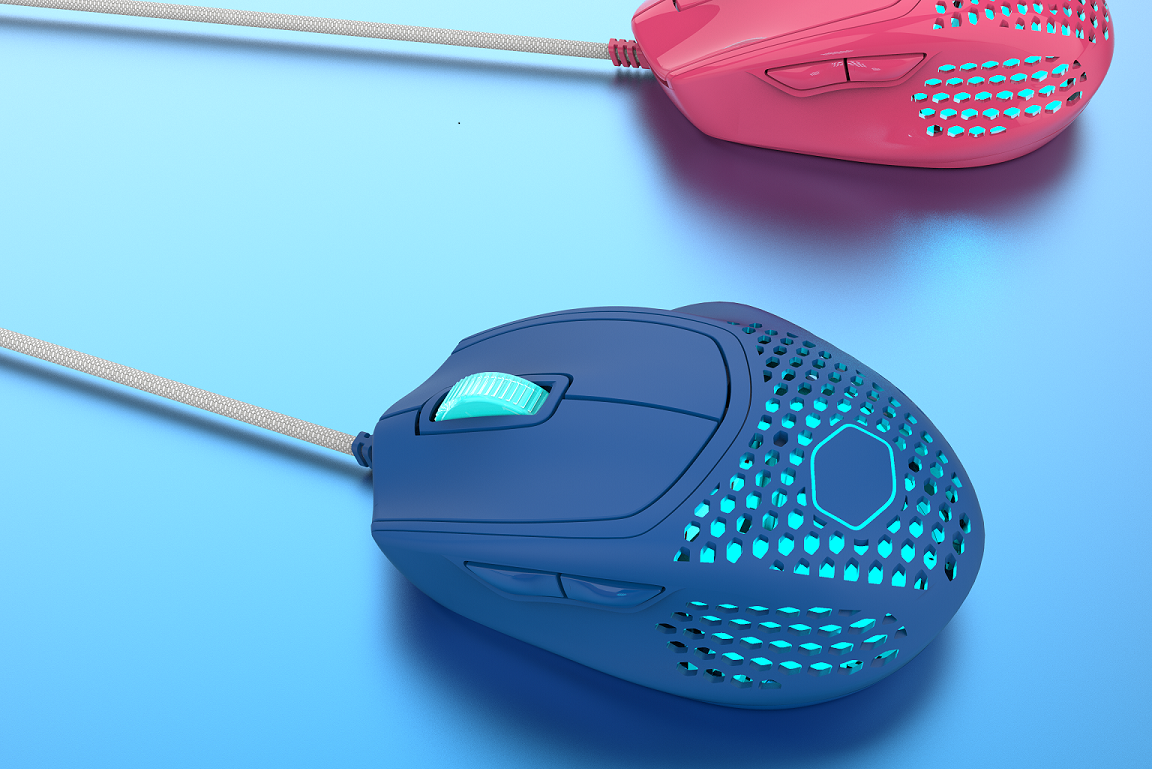 Ring finger support good for both gaming and office tasks

Depending on the user, side buttons may not be accessible for your thumb

A while back we reviewed Cooler Master’s MM710 – a honeycomb bodied gaming mouse that put the emphasis on being lightweight. Later on CM released their MM720 with the same idea, but built more off of their Spawn gaming mouse with ring finger support. This one goes even lighter and adds RGB to the mix, with a nice price tag of $49 at Cooler Master.

Before we get into it, here are some specs on the unit: The MM720 follows the lightweight build construction of its previous generation with a honeycomb design and the same button layout – a left and right click, clickable scroll wheel, and two thumb buttons. Unlike the MM710 though the honeycomb pattern is put to good use by being able to display RGB LED lighting from inside. The Cooler-Master-logo-shaped hexagonal cutouts and the lightweight cable allowed CM to cut even more weight, dropping the MM720 to a mere 49 grams, making it one of the lightest gaming mice out there. As a comparison, their full-weight MM830 is 122g on its own, and 162g when you add the cable to that.

It may be smaller than the majority of gaming mice out there, but that doesn’t mean it’s uncomfortable. The MM720 is based on their Spawn gaming mouse design, which is shorter than normal with a bit of width to it, featuring an additional groove on the right to support the user’s ring finger to work in a “claw” configuration. My hands aren’t huge, and this was still comfortable to use. There was a bit of a learning curve due to how light the mouse is, but after customizing the DPI settings in CM’s MasterPlus software movement came right back in line to what I needed. Standard computer use as well as gaming for extended periods of time was very comfortable – the groove for the ring finger takes some of the strain off of the hand, and combining the light weight with PTFE feet help it slide very easily around your mousepad or gaming mat. The PMW-3389 sensor was spot on and accuracy was never an issue – my failures playing sniper class characters in FPS/MOBA games could be blamed completely on me, because the sensor is excellent. For those looking at comparison, this is the same sensor Razer uses for their Naga Trinity, which we are also a fan of here.

Cooler Master switched from the MM710’s Omron switches to LK Optical micro’s on the two primary buttons, rated for up to 70 million clicks. I literally could not find any situation where the clicks didn’t have instant response on input, at least based on my human detection. CM says it’s “nearly instant actuation nearly 3x faster than traditional mechanical switches.” I can’t really refute that, at least while playing Dungeons and Dragons: Dark Alliance since it was freshly available on Game Pass. On the left side are two additional buttons which you can program do do basically whatever through MasterPlus. They sit a little bit forward, so it might not work for all users depending on how you grip your mouse to play. I tend to rest my palm on the top of the mouse, which lets me use the ring finger groove without giving my thumb any issues catching both of the side buttons. For folks that hold the mouse lower and are more “fingertip” clickers though, using the ring finger groove might set your thumb a little low for the side buttons. Not an issue for me, but I can see it being an issue for others. As with all modern CM gear, the programming is run through their MasterPlus software. For lighting this lets users control the lighting for the two zones (scroll wheel and body) as well as DPI, liftoff, and snap settings for performance and use. The buttons can be programmed two ways – the standard action settings and a “combo” setting for each key. The one issue I had – which is really the software and not the mouse – is that I couldn’t resize the window. Not usually a problem but I have a 44″ ultrawide and I would really like to keep it in a smaller window. CM has partnered with NachoCustomz to bring us new colorways for the MM720. So instead of the black and white options, the mouse is now available in Vivid Red, Electric Blue, Erika Pink, Beryl Green, and Light Yellow limited editions. These make for even more customization options pairing bright casing with the LED lighting.

“I’m excited to be able to work with Cooler Master on this project. It’s a big opportunity for myself as an artist and for the rest of the modding community,” says NachoCustomz. “I can’t wait to see what else we can do together.”

The Cooler Master x NachoCustomz MM720 colors will be released in September 2021 for $99, but you can pre-order them starting today at Cooler Master. In addition, to celebrate the announcement of these colors, the Black and White MM720 versions will be on sale on July 4th for a limited promotional price at Amazon.

The MM720 is an “almost” no-frills gaming mouse, and one of the lightest out there at that. It glides clean, provides additional support to reduce hand strain, and has great sensors and switches at a serious value at $49. There are going to be some users this isn’t going to 100% work for, but if you’re a palm gripper this is going to do you just fine.

June 30, 2021
Our Review Process
Latest Reviews
Where to?