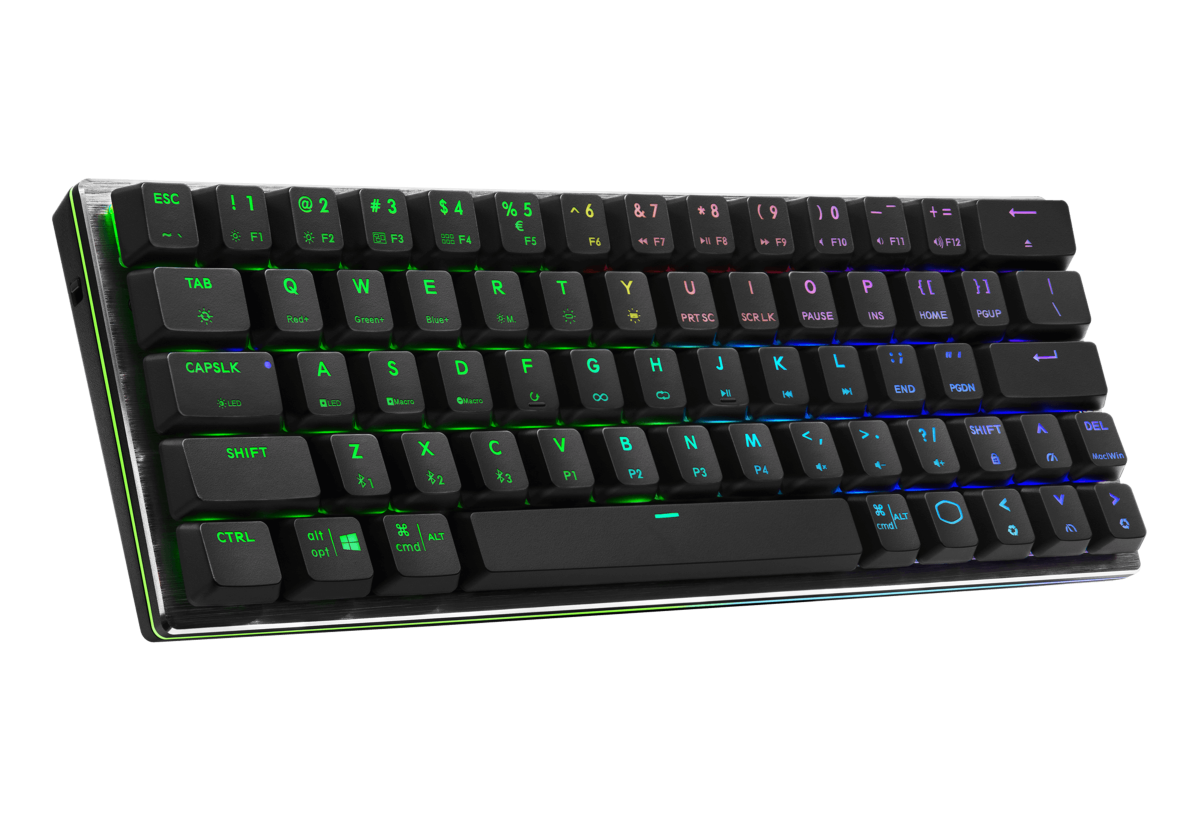 Noted improvement in feel over the SK621

A couple of years ago we tested out Cooler Master’s SK621 portable keyboard and we were big fans. Today we’re looking at the 60% keyboard’s successor, the SK622, available at CM and Amazon right now at $119.9`9. And while a lot of the specs are similar, the changes are in the switches and keys – which is kind of the most important part of the whole thing. We’re punching up this post on the keyboard itself, and we’re pretty pleased. The SK622 measures at 293 x 103 x 30.28 mm, with a 13mm bump in height when the feet are open. That’s one of the welcome changes over the previous generation – the SK621 didn’t have feet that could open up for some additional tilt. The build itself is nice and sturdy, and looks super clean too – the brushed aluminum deck and small bezels give a floating keys kind of look, especially when it’s lit. Like we mentioned up top this is a 60% portable tenkeyless unit, which makes it super light and portable. I used the SK621 routinely as part of my kit for my life as an IT pro, and this one, being just a touch sleeker, is replacing it. Part of that is also the typing and action which we’ll get to in the next section, but we do love the form factor as well.

The SK622 comes with a nice USB-C to USB-A braided cable for charging or running wired if you’re not in a Bluetoothy mood – you’ll also need it for the initial hookup to a computer to program the profiles through the software and update the firmware before you’re ready to roll. Most of the functionality can be programmed through Cooler Master’s MasterPlus+ software, downloadable from the CM website. This lets you program any macros you need, a huge array of lighting that includes reactive lighting when keys are struck, as well as individual key mapping.

The on-the-fly controls using the Cooler Master function key is pretty nice for some different operations. You can switch between three Bluetooth profiles using the Z, X, and C keys – which I personally had set to my desktop, my laptop, and my tablet. With a single key press I was able to switch pairing between the three devices for wherever I was. You can also switch between 4 profiles that can be programmed into it using the MasterPlus+ software and cycle through preset and custom lighting and those macros tied to your profile. Don’t have a Mac to test it on here, but it is also listed as a compatible OS. Let’s start with the switches. Whereas previous versions used Cherry MX switches, this generation of SK6 keyboards feature TTC low profile mechanical switches, with the SK622 available with Red, Blue, or Brown options. The version we have to review features the linear red switches, which provide action similar to the red switches from Cherry MX that you may be used to. They have decent response and aren’t too clicky with their response, with a not-too-hard and not-too-soft actuation. If you want clicky, you can go for the blue switches, or opt for the brown switches if you prefer a more silent feel and sound in your typing.

In addition to the change in switches is the changeover to new ergonomic keycaps. These do make a difference in the typing experience, and have the shape of what I call “stadium seating” as opposed to the flatter profiles of other keyboards. It gives it the feel of using a full size keyboard at your desk even though what you’re punching on are in reality far slimmer. Take a look at the image and you can see see on the left how it changed from the super-flat keys of the previous generation on the right. I mentioned the feet in this new version that the previous generation lacked. Instead of typing on a mildly sloped wedge, the feet bump it up to operate like a “normal” keyboard at a slope that most users are used to. That said there are going to be a couple drawbacks in using a 60% keyboard. What’s generally between the main keyboard and tenkey have to share space with other keys and be activated using the CM function key – for example page up and page down are the bracket and apostrophe key activated with the function key. It’s not a slight against this unit more than it is just how things work on a 60% keyboard. The only real issue I had with the specific key layout is the awkward position of the delete and shift keys in the arrow key cluster. I was hoping this would be changed from the SK621 and moved to the upper right of the keyboard – I would have more gone for a shortened backspace key with the delete key in its natural place. The right shift key is also a single square, so becomes a bit of a “pinky key” should you need to use it.

Cooler Master’s SKL622 delivers with a keyboard that is comfortable to use, portable, and gives you the option to run either wired or on one of three Bluetooth profiles for three different devices. As an IT pro It’s great for my tech bag too, taking less space in my kit for when I have to go onsite. This makes it easier to have a gaming-grade portable keyboard coming with you on the road, as chances are it’s going to be better than most of the embedded keyboards you have on your laptop, be it gaming or business. Available in grey and silver, it’s priced at $119 so it’s in line with something like Razer’s Huntsman Mini, and it’s going into my tech bag right after I hit publish here.

July 15, 2021
Our Review Process
Latest Reviews
Where to?