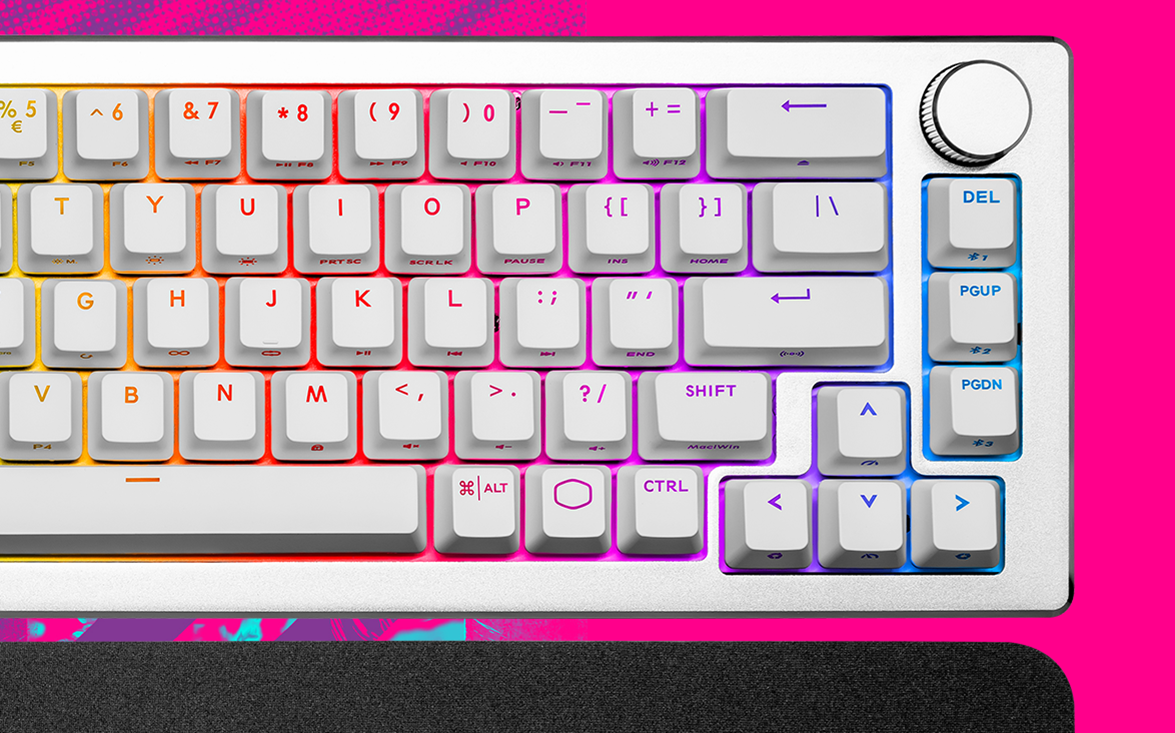 Can pair with 3 devices on BT

Comes with a wrist rest

Battery life could be longer

We’ve seen a couple of Cooler Master’s small form factor keyboards (the SK621 and SK622) and today we get to take a look at one of their new models for 2022 – the CK721, available for $99.99 at the CM Store in both space grey and white ($119 at Amazon). It’s available in their red, blue, and brown switches. We got the linear reds for our review, which we kind of favor over the others in past reviews. The CK721 has a similar sleek design as CM’s previous small-form-factor keyboards, featuring a brushed aluminum plate on top of a hard plastic base. The difference with this edition is that the aluminum plate is removable, adding the ability to customize it. Cooler Master has custom PBT keycap sets and removable aluminum plates to, as they say, “make it your own.”

The keycaps are the same TTC keycaps that are featured on the SK622, but they are full height instead of low profile. As mentioned before, we have our preferred linear red switches, but is also available in blue and brown, which provide a clicky or tactile experience, maintaining the same travel distance of 4mm. One of the more understated changes are the feet. The keyboard deck is mildly angled like most, but instead of one level of height the feet can be kicked out to, this has 2 levels of height built in, so I was able to make the typing experience more comfortable with a custom height. It’s a 65% keyboard, which is the biggest change over the last generation’s SK622, which was a 60% board. This gave us a bit more extra room and relieves some of the cramped keys we found on the previous edition. The right side is where the bulk of the size change takes effect, where the arrow keys, as well as Delete, Page Up, and Page Down are shifted outward to their own sections. This makes the right Shift key a bit bigger than on the 622, and we found we didn’t stumble as much with those keys out on their own. We no longer needed to press multiple keys to get to those functions. In addition to comfort, those three keys are on-the-fly Bluetooth pairing keys to up to 3 separate devices, compatible with Windows 8+, Mac OS X 10.10+, Android, and iOS. Other on-the-fly programming includes per-key brightness, lighting mode switching and macros. The extra space also allows for a programmable ad clickable dial on the upper right side, which allows for volume control, cycling through LED cycles, or really whatever commands you want as programmed through CM’s MasterPlus+ software. It’s and additional level of control that adds to the keyboard’s usability. The MasterPlus+ software of course also allows users to customize macros and LED patterns with up to 4 profiles.

As far as connectivity, the CK721 can run either wired (USB-C) or wirelessly, with Bluetooth as well as 2.4GHz available as option. A USB dongle for 2.4GHz is embedded in the side of the keyboard for easy storage.

What was very nice was that a perfectly sized wrist rest was included in the box to match, accented with the CM logo in the corner. Granted, we do miss the fancy velour bag that came with previous models, but the wrist rest is much appreciated and way more functional. Given the very flexible connectivity this keyboard has, we were able to test it on a couple different platforms. We hooked it up to our main rig which is on Windows 11 Pro, as well as our Samsung Galaxy Note20 Ultra for the Android experience.

Since non-mobile OS’s are where you can program in your profiles using MasterPlus+, we set those up on Windows, and were then able to switch on-the-fly on Android.

So first up was our main rig – we took the keyboard for a test drive playing Diablo III and Shadow of the Tomb Raider, as well as using it for typing up some of this article. We didn’t need a dedicated numpad/tenkey so this small keyboard was perfect as a space saver not only on my main desk but my kitchen breakfast table as well. In both games as well as typing, we got great response and no double key entries in either.  The slightly larger size over 60% models was also helpful, giving our hands more room to work. The linear red switches are excellent general-purpose switches to use for both work and play, but as we said if you want a more tactile, “purer” gaming experience, you can go with the blue clicky option.

After the PC it was time to work with our mobile devices. Shifting into Bluetooth profile 2, pairing the keyboard with my Note20 Ultra was super easy. This makes it much easier for folks that need to type up and edit docs on the go or while traveling, using both G Suite as well as Microsoft 365. If you’re a Samsung user DeX can turn a phone and a screen into a mobile workstation. We were also able to get it going easily with our S6 Lite Tablet, which also gave us a mini workstation to run on. We don’t have any Apple devices here at the shop, so we can’t verify it’s as easy on iOS as on Android, but logic dictates that it should be.

We weren’t able to hit the advertised 73 hours of battery life (granted, that’s with the LED’s turned off). With the RGB LED’s on, we did see a bit of a hit on that number and had to plug it in after about 3 days of use. This is a lot shorter than something like Asus’s ROG Falchion NX 65%, but that one also retails for $50 more.

Overall the CK721 is improved over the previous generation, and we found that the 65% size much easier to work with than 60%. As we said not only did it allow dedicated arrow keys and more space, but allowed for the new dial, which adds a great layer of customizable control. At $100 this is easily an upgrade over most of your laptop keyboards, as well as a great addition to your mobile devices, where you’ll get a lot more done beyond your on-screen keyboard. And that $100 includes a wrist wrest, which ain’t bad. We miss the velour bag since as such we no longer have a travel case of any kind, but this is still a solid device.

May 4, 2022
Our Review Process
Latest Reviews
Where to?