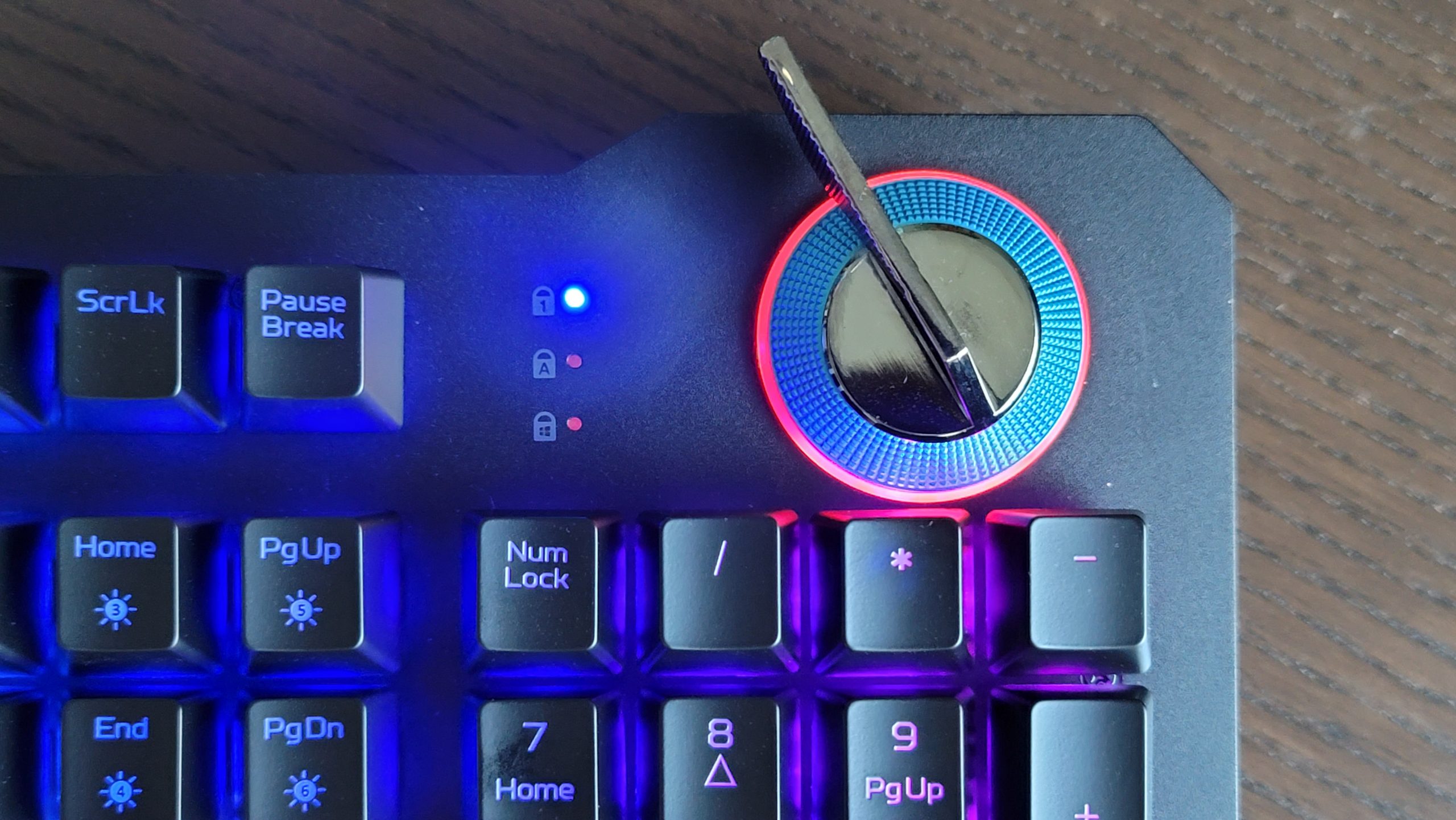 Can change between linear and tactile switches on the fly

5 profiles for RGB and macros mappable per key

Price tag is on the high side

Different people have different preferences when it comes to how their mechanical keyboards operate based on what they’re doing, and there are a lot of keyboards out there to deliver on those needs This is defined by the switches on the market that the manufacturer chooses to use, which controls the kind of experience the end user gets.

Every keyboard we’ve reviewed here has a particular style of switch that can’t be changed. Acer’s Predator Aethon 700 on the other hand boasts two complete sets of optical switches that can be changed on the fly, allowing users to jump back and forth between red linear and blue tactile responses. In concept it’s pretty cool, so we decided to test this ourselves. It’s currently available for $193 – it’s a steep price tag yes, but can it act as 2 full keyboards in one? The Aethon 700 is of a beast of a keyboard, but it kind of has to be to be able to house two switch sets to flip between. This means a larger chassis to make room, and Acer took advantage of that by making this a *full* 104 standard keyboard – that means a full number pad and arrow key set without having to squish either in the name of space. We appreciate this for sure, since we would love one keyboard to pull double duty in the office so we can switch between our adventures in Microsoft’s 365 and XBOX realms at will for both work and play. The chassis comes in black with anodized aluminum faceplate, and weighs in at 3.64 lbs! Like we said, it’s a beast, and is actually heavier than a lot of the laptops we review here. On the upper right is the adjustable lever for changing between the two styles – either tactile/clicky keys or linear for a press that’s smooth and quiet. The lever sits on a rough-textured volume roller with a red/blue light ring – the light indicates which mode you are in while you can spin the volume roller to adjust your sound level without having to jump into Windows or game settings to do so. As is warranted on a gaming keyboard, the WASD is highlighted with metallic blue keycaps instead of black, while every single key is RGB addressable using Acer’s Quartermaster software. QM lets you pick from 7 pre-made lighting modes, and also allows up to 5 profiles for lighting and macros.

One thing you won’t have to worry about is input lag – that’s because the Aethon 700 is fully wired. This keyboard really isn’t meant for travel like some of the slim or 60/65% models we review so Bluetooth / 2.4GHz wireless isn’t really that big of a loss. It’s on my main rig and not really going anywhere.

Acer also does us a solid here on accessorizing – a very comfy wrist rest comes in the box that stays connected to the keyboard magnetically.

We used the Aethon 700 in both modes for both work and play, and we did find two different typing experiences. When in blue/tactile mode we got clicky feedback with increased key resistance just like most blue switches, with a very audible (what some users would call “satisfying”) click whenever a keystroke registered. This mode worked great for office stuff and typing, like punching up this review itself. That feedback is helpful and does make it easier to write with less typos. This was the mode I preferred in Microsoft 365 and Google Workspace to get my work done. Flipping into red mode gave us an experience that was subdued and quiet, and offered much less resistance to register a keystroke. We found this to be helpful on the gaming side, since that lower resistance made it easier to hit a key repeatedly and make sure every keystroke is picked up. This same property that makes it an advantage for gaming makes it easier to make typos when you’re punching up documents with an errant finger slip. It’s easier on reds to get better response times in general. This was our preferred method when jumping into the realms of Azeroth in World of Warcraft, and even more so in Diablo III where sometimes we have to hold down or spam keys for skills.

So the keyboard did in fact function well for both work and play with the ability to change the switch style with a flick of a lever. We can definitely see however how some users can say that the reds and blues aren’t quiet or clicky enough. As we mentioned at the top most keyboards are made to do one thing well. And if that’s what you’re after then this isn’t the keyboard for you. This is a single unit to replace what you have as an all-purpose keyboard, and for me it works fantastically. There are a number of keyboards out there with a number of switch colors to get you what you need if you need a board for a specific purpose.

Acer’s Predator Aethon 700 is a great 2-in-1 keyboard, and for folks like me that use a desktop rig for multitasking this gets done everything we need it to do. The scary part is the price tag at close to $200. Many other keyboards are coming in at $150 and south with wireless and travel options, but at the same time they are also locked into a single type of switch and focused performance. So the real question is to the end user – is $193 worth it for you?

August 24, 2022
Our Review Process
Latest Reviews
Where to?