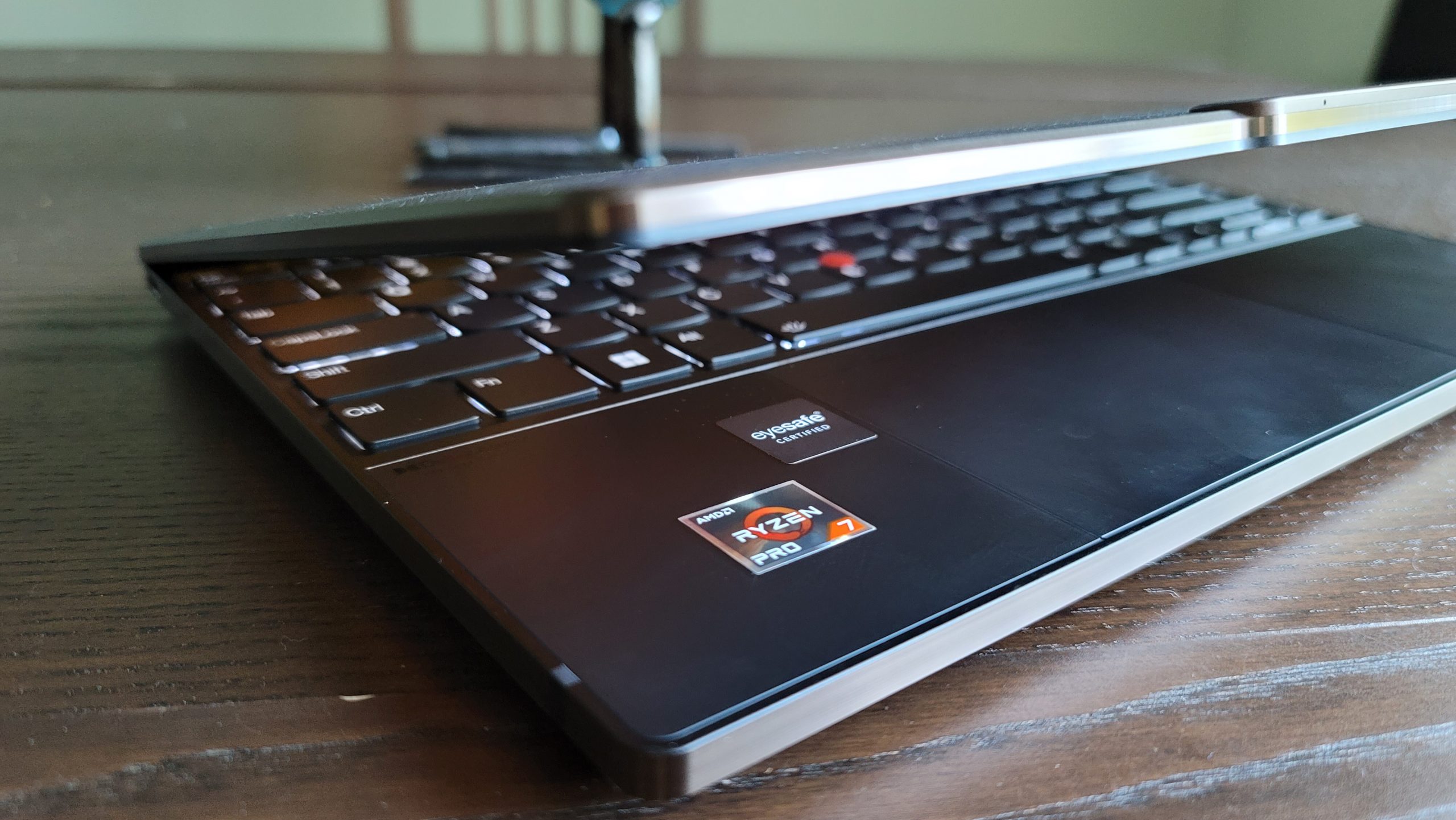 Today we have a brand new entry in the Lenovo lineup with the ThinkPad Z-series. Available in 13 and 16″ form factors, this is the first high-end ThinkPad that’s running AMD’s Ryzen/Radeon combo instead of Intel’s i7’s with integrated Iris Xe graphics. We get all the business and security features we would expect like dTPM, biometrics, and Microsoft’s Pluton security chip embedded, and that does demand a high-end ThinkPad pricetag. Currently the Z13 starts at $1,355 with various sales and discounts, but ours comes in more around $1,850 with those same discounts in place. Here’s what that buys you: While not every model is going to have the cool vegan leather cover, the Z13 is positioned as a premium ThinkPad product, with consideration given to sustainability. The grey all-metal models are built with recycled aluminum, while the bronze and leather version we have for testing uses recycled PET as and additional construction material. Even the packaging is rapid-renewable bamboo sugarcane fiber. As far as dimension the 13″ model begins at 2.78 lbs, and has a small footprint of .55″ x 11.59″ x 7.86″, but still has a sturdy and premium feel at under 3 lbs. At that weight it’s still in the same neighborhood as the X1 Carbon Gen 10. Our version had the vegan leather lid as we mentioned, while the edges of the unit were a very clean brushed bronze, with an additional bronze bump on the lid of the monitor that houses the webcam and also adds a bit of a contrasting accent. Opening the Z13 up brings us to a screen with very thin bezels to the left and right, with the webcam on the top of the frame protruding just a bit. The keyboard on the deck had a nice white backlit keyboard that ran edge to edge, not wasting any space on the minimal frame. We have the ThinkPad keyboard we all know and love with a new and more clicky feel on the glass haptic touchpad.

Due to its slim profile the ports are limited to a single USB-C 4 on either side (the left for power in), and a headphone/mic combo jack. The Z13 also has a WWAN option to make this a solution to keep you connected on the go. If you’re looking for HDMI out you can get an optional adapter. The overall look, especially this version, shouts “business” from every angle, and the leather lid lets it blend in with the rest of your folios you may have on your desk. The last unit from Lenovo to integrate the leather look into its chassis was their 2021 Yoga 9, which you can take a look at here.

We didn’t run the Z13 through all of the paces for 3D graphics processing, but this is the first premium grade ThinkPad running a Ryzen chipset so we were interested to see how it fared.

PCMark 10 Applications: We got a 12,294 on this office suite specific test, also slightly higher than other productivity notebooks.

3DMark Time Spy: The DirectX12 test gave us a 2,345 – far short of the average gaming laptop score of roughly 5,000 but again beating the X1 Carbon, showing that the integrated Radeon graphics may have an edge over Intel’s Iris Xe.

Procyon Office Productivity: UL’s newest benchmark for office productivity gave us a 5,865. Spot on with the X1 Carbon. Shadow of the Tomb Raider: AMD’s integrated Radeon seemed to pack a bit more punch than the Iris Xe, and allowed us to hit 30fps without major MAJOR sacrifices. We could have dropped the resolution below FHD or lowered the overall settings from high to medium, but we get a pretty good idea here with our FHD tests. Final Fantasy XV: Again, the Ryzen/Radeon proved to give us a bit more performance over the i7/Iris Xe.

Without dedicated GPU’s we never expect business or productivity notebooks to be able to give us crazy gaming, but hey, it’s a fun side effect – especially when you can play Final Fantasy XV on standard settings and not get bogged down.

As always, with the brightness down to 60% and balanced battery mode, we started with some media and got to work. Our media stream for the Z13 Gen was was Marvel’s Moon Knight for a couple episodes, which took us down to roughly 80%. This is where we saw things get a little nuts. Turning into our office worker for the day, an hour later we were still at 75% doing basic communications on email and Slack, and continuing my adventures in productivity the Z13 showed no signs of slowing down. After spending some time in 365 and Google Workspace the notebook kept up with me for the entire day and then some when I woke up the next morning.

It didn’t lose too much battery while being closed over night and it served will on the 2nd day with a couple hours of messing around with silly YouTube videos and attending a couple of Zoom calls until it started to kick into battery saver mode. Lenovo advertises 18.3 hours – this is pretty ambitious but I hit about 14 hours with this one. Depending on how you use it this could last you 2 full work days. And when it was done, rapid charge got me back up to 50% in less than half an hour.

I think I would have shaved a couple of hours off of that number if we were using the optional 2.8K screen instead of 1920×1200, but still ain’t bad.

With a focus on sustainability, Lenovo’s first high-end AMD-run ThinkPad still delivers on performance. The small footprint for this 13″ notebook doesn’t have any room wasted with tiny bezels and an edge to edge keyboard, and the integrated Radeon graphics seem to give us a bit of a bump over what we were able to get with Intel’s Iris Xe. We used Lenovo’s own X1 Carbon Gen 10 as its nearest comparison (we’ll have the X1 Nano review up soon as well) and it went toe to toe with their productivity king, and did so with some style as well if you’re not about the traditional ThinkPad hard edges

August 23, 2022
Our Review Process
Latest Reviews
Where to?