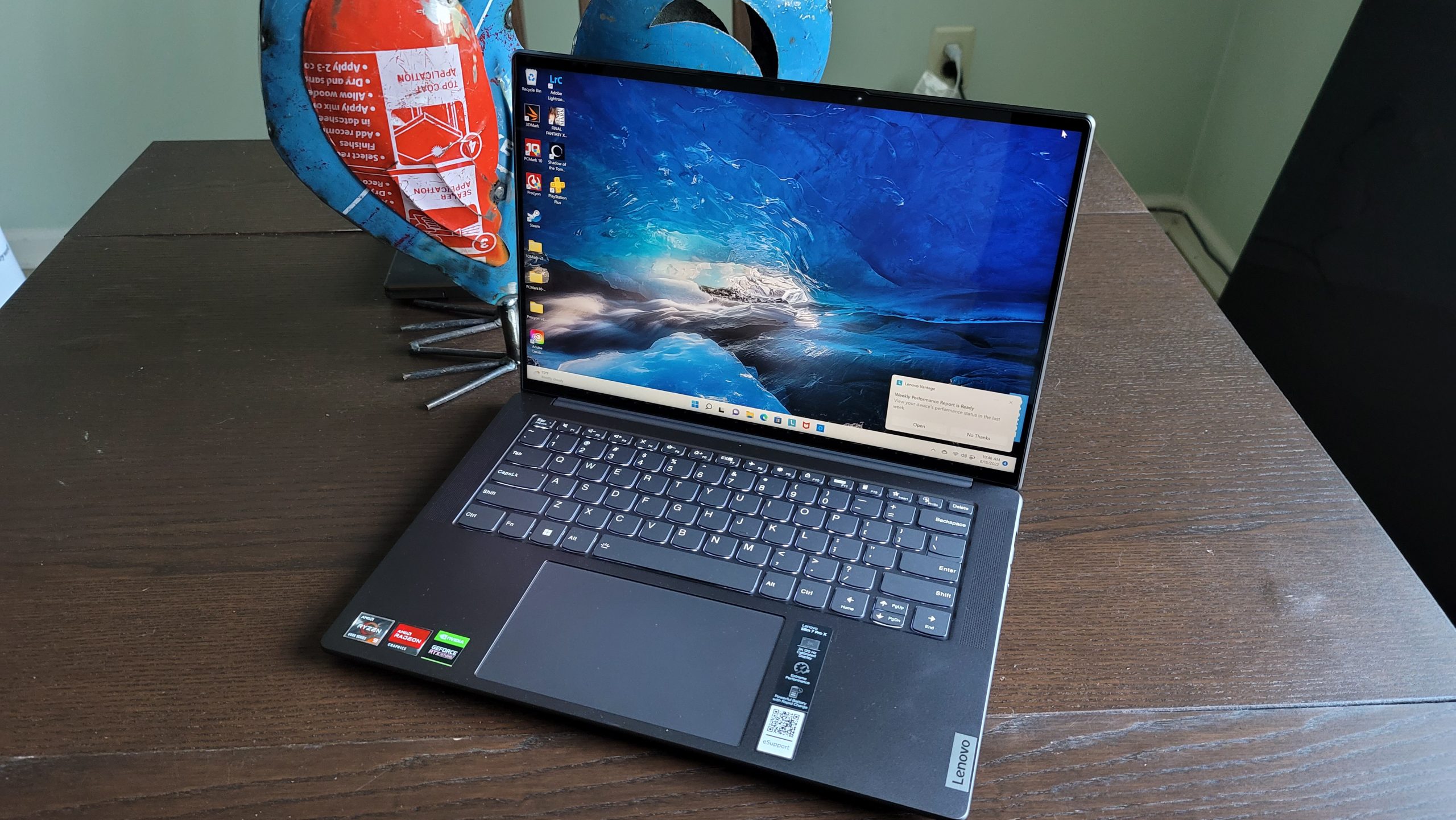 "Jack of all trades" appeal for users that want one device

Feels like there should be an SD card reader in here

Also feels like there should be an HDMI port in there

"Jack of all trades" won't appeal to specialists

Lenovo’s Slim 7 Pro X is aimed at the creators among us – the NVIDIA Studio certified notebook is said to “supercharge” the creative process, providing premium specs in a slim form factor. The “X” means that it’s packing a dedicated GPU to that end, and is available using AMD’s newest Ryzen processors or Intel core procs, and starting at $1,399, has the specs to operate as the all in one machine we all hope for when we drop a grand or two on a notebook. Our review model (which is closer to $1,800 on paper) was the AMD flavor, and here are those specs before we begin: On paper the specs lend themselves to those that find themselves in Adobe Creative Cloud more than trying to max out frames per second in their Steam library. 32GB of 6400MHz memory matched with the 3K touchscreen panel running at 120Hz and 100% sRGB screams “studio” – not only does the display make day to day tasks shine, but making sure your artistic efforts are accurate in Photoshop and pushing speedy renders in Premiere are some of the benefits. The size may seem a bit strange – maintaining the 16:10 aspect ratio Lenovo has moved to with its notebooks gives us a nice 3K screen (3072×1920) that shines a bit brighter than what we would expect from a 400 nit spec. It also gives us some clean multitouch capability. We get decent screen real estate with an IR 1080p webcam at the top of the screen. The keyboard is without the number pad to offer keys that aren’t too small to work with, and it’s flanked by up-firing speakers on the left and right. The build feels sturdy but overall much sleeker than the ThinkPad line. Instead of hard edges, here they’re softer and rounded off, giving the Slim 7 Pro X a feel that’s less “business” for lack of a better term, but just as premium. It’s still just thick enough to be able to include USB-A ports though – there’s a 3.2 Gen 1 on either side (the right one for power charging). In addition to this there are two USB-C 3.2 Gen 2 with DisplayPort 1.4a / power delivery / 10Gbps data on the left. Additional controls on the right are the headphone/mic jack and e-shutter switch for camera privacy. Take a look at what the unit looks like stacked under the X1 Nano Gen 2 for a better idea. Our one gripe though is since it can fit USB-A ports we kind of wish there was an HDMI out there too.

We were really looking forward to how this crossover machine did – and here’s what we got:

PCMark 10: Our office benchmark gave us a 6,686 (Essentials 10,177, Productivity 9,103, Digital Content Creation 8,850), giving us a score about in line with a gaming PC and beating the average office laptop and PC. While the video card gives it a a bump in the digital content creation sub-score, it still performed as well as the X1 Carbon Gen 10 on essentials and beat it on productivity.

3DMark Port Royal: We couldn’t get a clean test for the ray tracing capabilities of the X’s RTX 3050, so we cover that in some of the gaming benches below.

3DMark Night Raid: Night Raid gave us 33,714 – in line with the average gaming laptops and beating integrated graphics as well as Quadro cards, but falling short of more powerful RTX cards in dedicated gaming notebooks like the Legion 5 Pro

Procyon Photo/Video Editing: The test for Adobe Photoshop and Lightroom gave us a 6,747, and we got a 4,174 for testing Adobe Premiere Pro. This isn’t as high as the values we got running Lenovo’s Legions, but it still got the job done.

Procyon Office Productivity: UL’s newest benchmark for office productivity gave us a 5,505 – meaning it performed as well as the newest X1 Carbon. Shadow of the Tomb Raider: We’re still looking at 60 fps+ in FHD at the highest settings, but ray tracing at ultra does slam the system a bit. Even still, FHD with ultra ray tracing breaks 30 fps. Remember there are degrees between no ray tracing and ultra. As a note these tests were all run with NVIDIA DLSS in performance mode. Final Fantasy XV: 2560×1440 seems to be the resolution where we can have a standard experience – trying to run FFXV in 4K is a bit too much for the Slim 7 Pro X to handle cleanly. Just for fun we tried a couple of games from our XBOX Game Pass library, but namely Forza: Horizon 5 as the toughest graphical test that was available – and also one that dynamically can pick the optimal settings for your rig. Forza was able to hit 63 fps at 1920×1200 @ 60Hz with all settings on high and ray tracing settings on medium. Not too bad for a productivity machine. As always, we clicked the laptop into balanced thermal/battery mode and turned the screen brightness down to 60% and went to work to see a real measure of battery time. We started with 2 hours of Netflix’s new adaptation of Sandman to kick it off. After that we made the Slim 7 Pro X our work machine for the day, dealing primarily in Microsoft 365 for email, drawing up project plans and of course, logging those hours in Excel so we can get those ducats. Next up was remote sessions into some client systems to do some work without having to leave the comfort of my home office, and finally a bit of image editing in Photoshop, which ran pretty flawlessly.

We ended up getting just north of 10 hours of battery life. That’s a whole day and pretty good for a notebook with an NVIDIA RTX card inside, and I’m guessing it’s a bit of that AMD magic that gives us that bit of extra stretch. And with rapid charging you can refill the tank pretty quickly to get back in business. We imagine you’ll get more or less that time if you’re also adjusting your refresh rate options instead of running it at 120Hz all the time.

Most notebooks try to do a thing well – there are ultra thin and light notebooks that exist for the sole purpose of productivity on the move without any graphical chops, while gaming laptops can be heavy and clunky with a big battery tradeoff. The Slim 7 Pro X tries to do both as a jack of 2 trades, and for the most part gets it done without ridiculous levels of compromise. You’re not going to be able to go without charge for days but 10 hours with a dedicated GPU ain’t bad. You’re not going to be playing the latest games with all the everything turned all of the way up, but you’ll still be able to play them. That’s kind of the sweet spot content creators sit in, and this will give them  as well as other power users the best of both worlds that they need, especially under $2k.

If Lenovo is really looking to make this the one true compromise machine for all users, they could let us flip the screen over into tablet mode with pen input – perhaps we’ll see a Yoga to fit that particular bill?

August 18, 2022
Our Review Process
Latest Reviews
Where to?