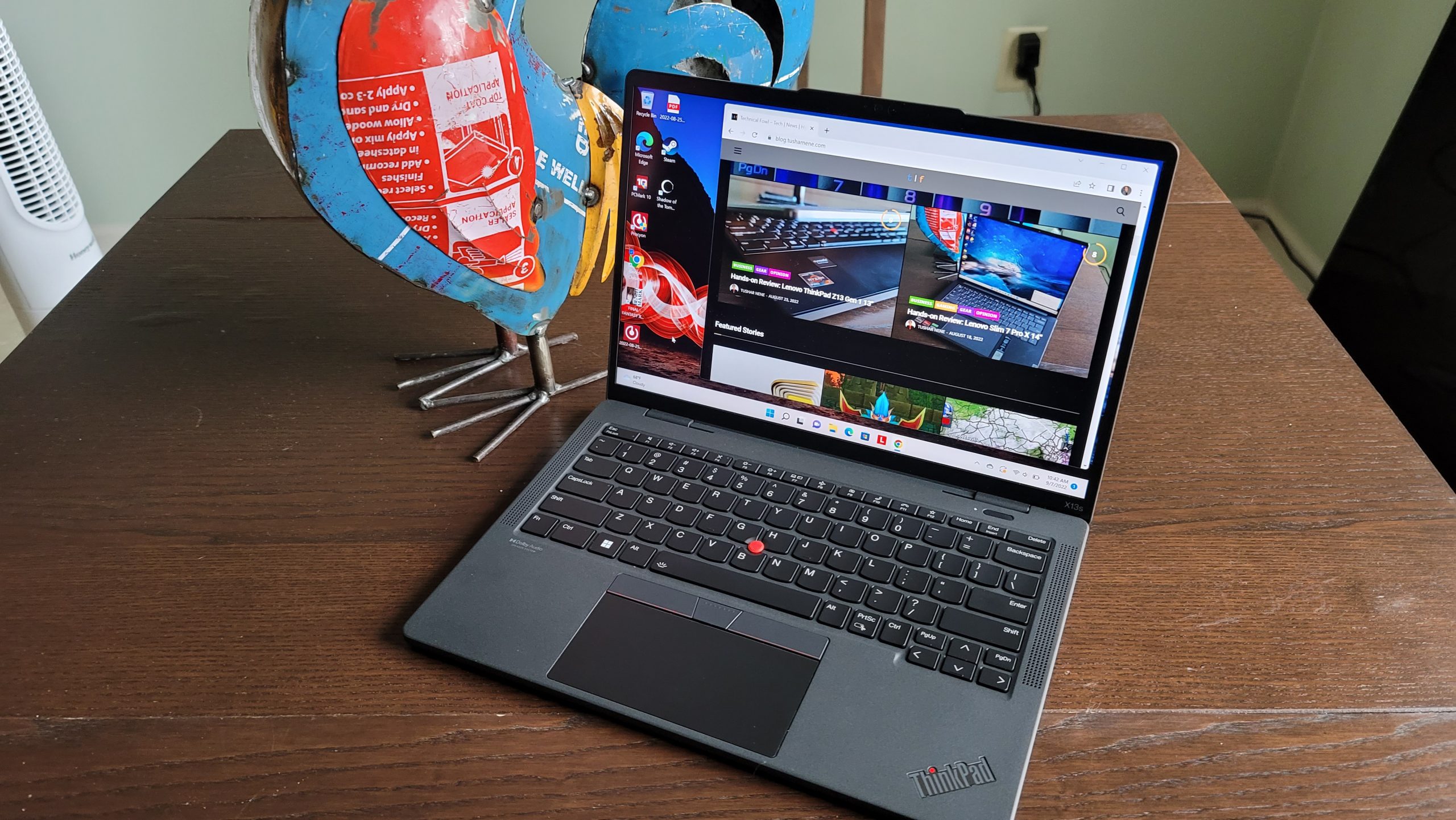 Screen is brighter than a 300 nit spec would reflect

Heavy pricetag without sales or discounts

As we were told at Lenovo’s Mobile World Congress event early this year, “the ‘s’ used to stand for slim – but now it stands for ‘Snapdragon.'”

And that’s precisely what their ThinkPad X13s is – it’s a Windows 11 experience on Qualcomm’s Snapdragon platform, with the aim of providing a smartphone experience and battery life with the performance of a traditional Intel/AMD PC. It was our favorite from Big L’s MWC showcase, and we were quite excited to get our hands on it. These are starting with discounts at Lenovo right now for $1,085, but full price start is around $1,800. Before we continue with the details, here are the specs (which will run you $1,571 with discounts and $2,619 full price): The notebook is made for real mobility, and that includes the physical specs, measuring in at 0.53″ x 11.76″ x 8.13″ and weighing 0.53lbs. At a 13.3″ screen size, this makes it thin and light enough to drop into a go bag and get moving. The adapter is also small and portable, requiring only 65W to charge up the battery. The lack of fans inside also makes this a silent machine to operate. It keeps mostly in line with the classic ThinkPad design for their ultra compact notebooks, matching key for key with the X1 Nano of the same size. The keyboard size is slightly smaller than the Nano though, allowing room for two up-firing speakers on the sides. There’s a very responsive glass-top touchpad with three independent hard buttons and of course, the red TrackPoint in the middle of the keyboard as is custom. It feels a bit more shallow than the traditional ThinkPad keyboard with a bit less pop, but still caused us no issues. At the top of the screen is a pronounced notch for the webcam, controlled using an e-shutter with the F9 key, with a good UXGA (1920×1200) 300 nit multi-touch display in 16:10.

For the weight and size, there are a reduced number of ports, and here it too matches the Nano with 2 USB-C’s on the left (one for power-in), and the mic/headphone combo jack on the right with the optional WWAN card slot. We do wish these were USB-4’s with Thunderbolt (they’re 3.2 Gen2) but I imagine that’s part of the goal of maximizing battery life. As far as the insides this thing is literally a 13.3″ mobile device, running a Qualcomm Snapdragon and 5G WWAN. Our test model was running cellular through AT&T so we tried to run it on 5G as much as possible. This will save you from having to use your mobile device as a mobile hotspot to use your notebook out and about, as well as using non-secured public wifi.

For additional communications it has WiFi 6E and supports mmWave 5G, which is a high-frequency band that supports >1GBps (in theory) transfer speeds in small areas and short distances.

Memories of app compatibility with Windows on ARM made us a bit worried, but Lenovo worked with Qualcomm and Microsoft as well as ISV’s to try to eliminate compatibility issues. This means it can run most apps, but as you’ll read below we still don’t have 100% compatibility with the Windows ecosystem. It’s still running Lenovo ThinkShield security and still runs a ThinkPad BIOS so can also easily be integrated by the company’s IT boss while deploying them to your road warriors.

This was an interesting one since many benchmark tests are made for Intel/AMD PC’s, and aren’t really designed for ARM. So we were able to run a couple of the more focused “office productivity” benchmarks for us to compare to other models we’ve reviewed as a point of reference.

PCMark 10 Applications: We got a 7,893 for the applications specific test for office suite. For comparison the Z13 Gen 1 we just reviewed scored a 12,294 for this same bench.

Procyon Office Productivity: UL’s newest benchmark for office productivity gave us a 3,640 – in comparison the X1 Carbon and Z13 Gen 1 hit 5,865. Not too bad of a performance hit for swapping out i7’s and Ryzens for Snapdragon. Shadow of the Tomb Raider: We were able to get a completed test for this one, but as expected it’s quite unplayable.

Final Fantasy XV: We actually couldn’t get a full read on this one. We tried it at 720p with “lite” graphics settings but the benchmark failed about halfway through. We imagine this is a compatibility issue with ARM. As expected our standard gaming benchmarks were non-starters on this machine, but you still have some options. While XBOX Game Pass doesn’t run on ARM, we got the PlayStation Plus app installed, and were able to stream modern games like Assassin’s Creed: Valhalla.

This is the test we were excited to run – The replacement of traditional PC processors and graphics to the Snapdragon platform promised to provide an intense spike in battery life. This is a great add for users to not only be able to connect from anywhere without wifi but also to be free from the worry of their laptop shutting down.

Lowering the screen brightness to 60% and operating on a blend of wifi and 4G/5G, we started our tests. As usual we started with a couple hours of Netflix, this time with a couple episodes of the new Sandman series, which barely put a ding in the battery meter, which still read in the 90’s. Over the next three days we used this as our work notebook, using it daily for work in Microsoft 365 and on-site / remote sessions at client sites. While I myself live in the ‘burbs of Philly where 5G isn’t wholly available, the WWAN clicked over to 4G LTE, still providing decent speeds without wifi. In other areas and closer to the city 5G popped in, giving us that speed improvement.

Over the next days were also Zoom calls, more breaks for media consumption and the occasional streamed game from PlayStation Plus as well. By our math we got close to 24 hours of battery life out of the X13s, which is pretty close to the advertised 28.

Lenovo has made huge strides in Windows on top of an ARM platform, and this is a fantastic offering for a first edition. There are still some native quirks with Windows applications not running properly or at all on systems without an Intel/AMD architecture, and that’s going to be the main detractor from this notebook, especially for users deciding between this and the MacBook Air M1, where everything works inside of Apple’s closed ecosystem. Specialized apps like Adobe suite for example won’t fully work, with the exception of Photoshop and Lightroom which have optimized versions for Windows on ARM.

That said, for most users that require an office workhorse on the go and always-on connectivity, the X13s is a fantastic option that won’t require constantly topping off the battery charge by plugging in. That battery life simply can’t be argued with. The X13s will only improve with Gen 2 as they do more work with Qualcomm and Microsoft to get things just right.

We can’t see getting the full value of this notebook without opting for the WWAN connection – while wifi will get it done when you have time to sit down where it’s available, the real power the X13s provides is the combination of the Snapdragon platform with 4G/5G cellular together for true mobility.

September 7, 2022
Our Review Process
Latest Reviews
Where to?