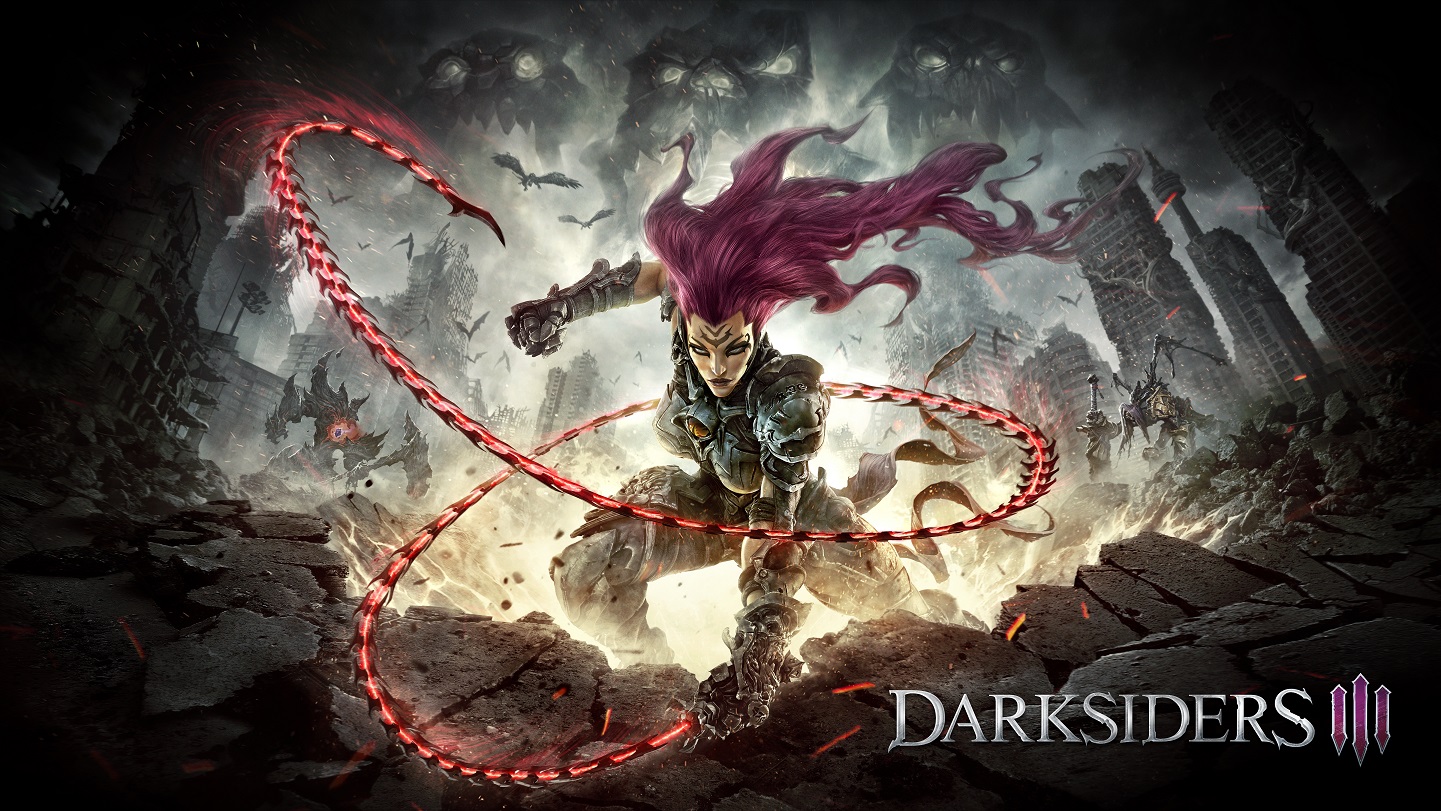 After six years away from the horsemen we love and the apocalypse we adore, the upcoming November release of Darksiders III is one we looked forward to with anticipation. We took it for short test run at PAX West, along with some Q&A with Reinhard Pollice, Business and Production Director for THQ Nordic. One of the things that’s tough to do is make a series game accessible to new players, especially after this long. Reinhard laid out Darksiders’ unique solution though – “Darksiders III starts off after the prologue of Darksiders I where War is chained in front of the Charred Council. In parallel the story of Darksiders II takes place.” So do you need to have played the first two at all? “No, you don’t have to completed Darksiders and Darksiders II to understand Darksiders III. Any fan of action adventures or combat focused game will have a ton of entertainment with the game and can get easily into it.”

So it’s nice that a player that is new to the franchise will be able to just pick up a controller and follow the story of Fury – It’s also a great way to get those new players to go back and play the first two games in the series. It’s just the same story from three different angles.

But why the long gap between Darksiders II and now? “We didn’t rush into a sequel as per our attitude towards game development and publishing. We had many interested high class developer we could choose from. But then we realized that the most passionate people about the franchise were the original creators. At some point they were ready to take on another Darksiders game and so we started the development after the Darksiders II Deathinitive Edition (btw: best name ever ™).”

OK Reinhard, I’ll give you that – “Deathinitive Edition” is pretty damn good. And honestly the passion and precision put into this development process is completely appreciated. The gameplay definitely felt different than the previous games. In the first game we took control of War, who was a bit of a slow mover that relied on brute force and heavy hits. Death was different in Darksiders II – he was far more nimble and the gameplay relied more on mobility and speed for movement around the map and taking the pain to boss fights. Fury brings us an interesting mix. She is equipped with a whip that not only damages enemies from a slightly-out-of-melee range, but those skills are augmented by magic. So opposed to a giant tank or nimble warrior, the play style is a bit hybridized – not totally acting as the ranged mage archetype, but not just relying on brute force either. “The idea of the whole franchise is that each horsemen has a unique personality and also a unique gameplay angle,” said Reinhard. “Fury isn’t as agile as Death who could fight hordes of creatures with his whip. She needs to be more tactical in combat. But on the other hand she can use her magical powers for abilities and weapons. Even her whip is magical.” The whip itself is not only Fury’s primary weapon, but a mechanism for movement. Getting to platforms that are not in jumping range generally have a post or ledge that fury can attach her whip to, and swing up to where she needs to be. During the first boss fight with Envy, one of the seven sins, an entire part of the encounter is Fury whipping herself from the ground to the top platform, presumably to get players used to the idea.

There was one difference it took me a moment to notice though – there’s no map! A strange development to me, especially for a game that lets you roam free in an open world. I was only playing one short area so it wasn’t that big of a deal, but I was already feeling the pangs of getting lost in the future. So what gives with the map? Reinhard had an interesting answer. “Removing the map was an easy decision with the way we set up the game. Not only each protagonist is different but also the game world in each Darksiders game. The way we chose to set up Darksiders III game world is that of one big dungeon with a lot of natural backtracking. We felt a map isn’t really necessary but to help player navigation we implemented a compass.”

So an open dungeon where you’re expected to get lost while hunting the seven deadly sins that were set free with an early apocalypse.. So… what about the order of the hunt? “Some of them have to be addressed in sequential orders but agives us t some point in the game you can choose in a nonlinear way who of the sins you want to take on.”

It’s going to be a fun ride back into the apocalypse this fall.

Darksiders III will be released on November 27th for Xbox One, PlayStation 4 and PC – in an array of editions from Standard to Apocalypse Edition and you can get more info at THQ Nordic’s official Darksiders III website. In the meantime enjoy their trailer from GDC below.

September 14, 2018
Our Review Process
Latest Reviews
Where to?