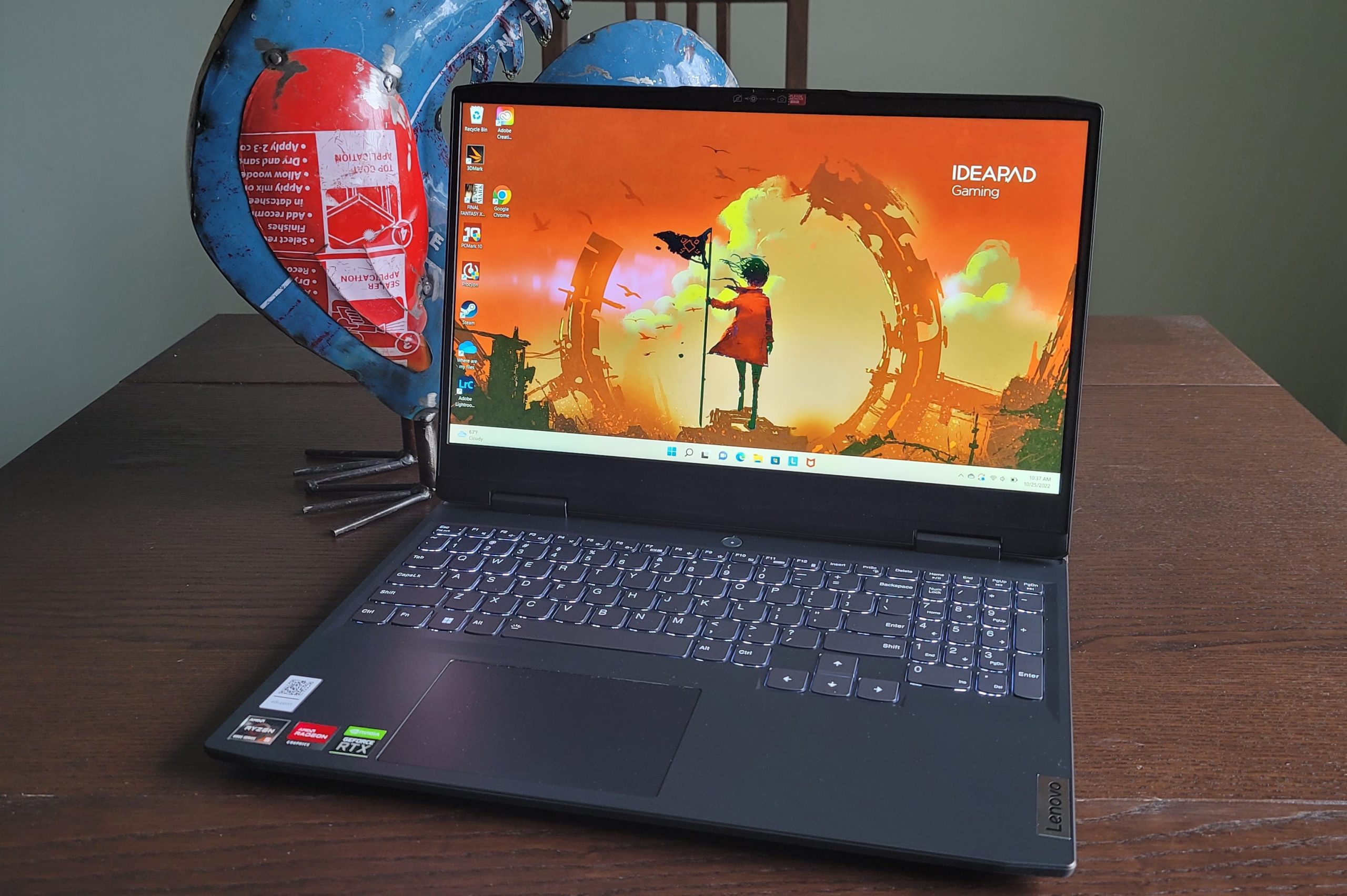 Good productivity and gaming, just hold it to 1080p

Storage maxes out at 512GB

Screen dim when not running at full brightness

While Lenovo’s Legions are their gaming flagships for gamers that want the most premium specs, the gaming models of their IdeaPads offer budget gaming systems for entry-level gaming for those not going for huge 4K ray-tracing domination. The IdeaPad Gaming 3 is available in both Intel and AMD flavors, starting at under $1k. Models with upgraded specs still max out at about $1,200 on Lenovo’s site, while the Intel edition starts at $845. Before we dig into it, here are the specs of our review model which will run you about $900: In addition to the specs, the design of the IdeaPad Gaming 3 is “Legion Light.” Instead of the aluminum construction on the Legions, the chassis for this unit are built with PC and ABS plastic, which makes sense as the junior gaming model. The overall aesthetic is the same though, with the addition of some milder curves on the corners instead of right angles. Instead of body-color fins on the back we have hard-painted blue accents. On the deck we have a white-LED backlit keyboard that has decent action but still feels junior grade to the Legion’s nice and springy version. On top the WUXGA screen shines at 350 nits and can be run at 165Hz, with a 1080p webcam on the top bezel with a privacy shutter.

With the specs that we have on this notebook, our ideal use case for it are students that need a laptop for school that has some gaming chops, or someone looking for an all-purpose laptop for home.

We had a couple of issues running benchmarks on this model with certain settings, even with the 3050 Ti the notebook is packing, but here’s what we were able to get.

PCMark 10: Our standard benchmark for office applications gave us a 6,024 (Essentials 9,164, Productivity 8,704, Digital Content Creation 7,440) which is definitely higher than Lenovo’s models without discrete GPU’s, but closer to the Legion 5 Pro which scored a 6,691.

3DMark Time Spy: Time Spy gave us an 5,518, roughly half the performance of the Legion 7 for DirectX 12.

3DMark Port Royal: While the 3050 Ti is capable of ray tracing, we couldn’t finish a conclusive test for Port Royal.

Procyon Photo/Video Editing: The test for Adobe Photoshop and Lightroom gave us a 5,049, and we got a 3,885 for testing Adobe Premiere Pro. This was again about half the performance of the Legion 5 Pro and Legion 7, but still more than enough for creators to run their Adobe suites. Shadow of the Tomb Raider: We got a decent score on FHD which shows that at highest settings the game will run flawlessly. But when we tried to run the tests with ray tracing settings on we hit some of the same roadblocks we did on the Port Royal test. Final Fantasy XV: Players can still run very well and get high performance in FHD with standard settings, and still a higher-than average experience with the graphics or resolution turned up. Bumping the resolution up to 4K is when it gets choppy, but that’s to be expected with the hardware specs. From our XBOX Game Pass library we also gave Deathloop a try, which supports ray tracing. While having it turned on and at FHD resolution, we really had no issues or chop or tearing while playing the game. So while our direct ray tracing tests had issues, we can see that we can play with some level of ray tracing turned on. However, the game did give us warning that the 8GB memory installed was too low to really crank anything up.

Looking back at our test data it became apparent to us that while this is a budget gaming notebook, having only 8GB of memory is what hamstrings the performance, holding it back from what a 3050 Ti can do. That’s not to say that they need to be packing 32GB like the top-tier Legions, but 16GB should be a baseline for real performance.

With a lower-power screen and processor, we expected some decent battery life. As always we operate on wifi, click the screen brightness down to 60% and set the battery/thermal to balanced. As the spooky season is upon us, our streaming portion of the test was Netflix’s Archive 81. After a couple hours it became our daily driver for work, shopping, and a good bit of web browsing. After remote sessions, Microsoft 365 data syncs, nearly falling asleep dancing around with some MS Azure admin, the IdeaPad 3 Gaming got us just to just about the 6 hour mark before tapping out. Not too bad.

Lenovo’s IdeaPad 3 Gaming is a good budget gamer for folks not looking for-super high power specs and a fantastic all-purpose machine for home and school. We think it would be a great budget gamer if that memory number was upped from 8 to 16GB. To us the reduced memory spec acts as a bit of a drag on the rest of the hardware, to the point of prompting games telling us flat out that we don’t have the memory to push settings to what an RTX 3050 Ti can handle.

That said, we’re paying attention to the target demo here, and it’s not folks in e-sports or high-end gaming aficionados. It’s home users, students, and I’d still give this notebook as a recommendation to parents who have kids starting to get into the gaming space. And it’s a good buy at under $1k for what you get.

October 31, 2022
Our Review Process
Latest Reviews
Where to?