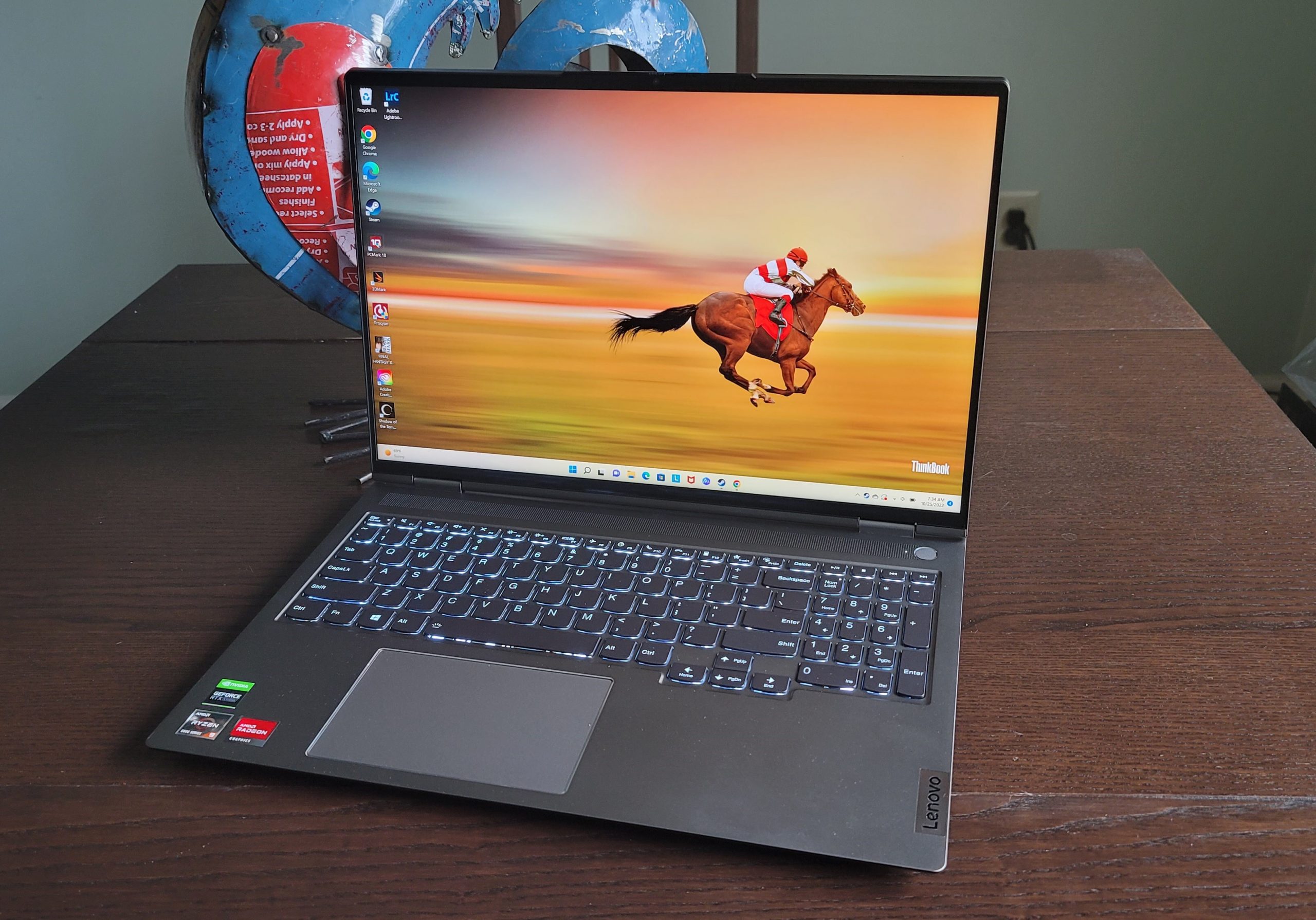 Today we’re looking at Lenovo’s ThinkBook 16p Gen 3, coming soon to the US with an array of Ryzen processing options and an NVIDIA RTX 3060. Not quite a ThinkPad, but also not quite a Legion, the 16p carries the DNA with both to deliver a balanced experience and for some folks one laptop to rule them all. The Ryzen 5 edition starts at $2,320, but we have the soon to come Ryzen 9 edition. Here are the specs of our model: Lenovo’s ThinkBook 16p Gen 3 rests kind of in-between the all-business ThinkPads and all-gaming Legions. It has higher end AMD Ryzen processors and mid-grade NVIDIA 30-series cards for dedicated graphics processing. To us this is shooting for small-to-mid sized business users, engineers doing light CAD work or artists that spend their days in Adobe suite. The dedicated GPU does give any of those use cases a side of decent gaming capabilities that allows users to push to high, but not the highest gaming settings.

I could easily see this one being a daily driver for work and some play. As for design, the 16p is more like the Legions than the ThinkPads, with a lip in the back that allows the screen to rest on when it’s opened to 180 degrees. It has a very sleek aluminum chassis in two-tone grey treated with some sandblasting for a smooth look. While it has a couple of those design elements from the Legions, it’s a little bit thinner (enough to not have an RJ45 ethernet port) starting at 0.64 inches thick, up to 0.78 inches, with a 14.02″ x 9.92″ footprint. As for weight it’s a bit lighter too, weighing in at 4.39lbs. On the deck we have a springy keyboard that’s comfortable to use. The touchpad is a bit smaller than other models, to make room for the indentation for arrow keys to provide a full keyboard experience. On the top half is a 2.5K WQXGA (2560×1600) 165Hz screen shining at 500 nits. While were drawing comparisons it feels brighter than ThinkPad screens, and the HDR 400 and Dolby Vision make the colors pop pretty well. On the top frame is a 1080p camera with a privacy shutter.

Because it’s bigger than the small and compact ThinkPads, we have a decent number of ports. On the left we have the headphone/mic combo and an SD card slot, which is refreshing to see is still in fashion. On the right is a USB-C 3.2 Gen 2 and a USB 4 (40 Gbps), each with power delivery and DisplayPort 1.4. On the back is the power port, an HDMI port supporting up to 8K/60Hz and 2 x USB 3.2 Gen 2’s (always on).

As far as feel, it feels comfortable to use and carry around on the go. It may have a mid-range RTX 3060, but that allows the 230W AC adapter to be slimmer than other models.

We’re working with a combination of AMD processing and NVIDIA graphics. The Ryzen 6900HX is a very nice processor, so we were curious to see how it worked with an RTX 3060:

PCMark 10: Our standard benchmark for office applications gave us a 6,514 (Essentials 9,368, Productivity 9,154, Digital Content Creation 8,749), which is in line with gaming laptops. On the PCMark 10 Applications sub-test scored a 10,789, slightly lower than some of the all-business ThinkPads.

3DMark Time Spy: Time Spy gave us a 6,940, soundly beating models like the IdeaPad 3 Gaming, but short of the gaming-tuned Legion 5 Pro and 7.

3DMark Port Royal: This ray-tracing test came back with a 3,936, lining up with the Legion Slim 7, also running the notebook version of the 3060.

Procyon Photo/Video Editing: The test for Adobe Photoshop and Lightroom gave us a 6,614, and we got a 5,158 for testing Adobe Premiere Pro.

Procyon Office Productivity: This productivity test gave us a 4,497. Not a bad score but short of the business-minded ThinkPad X series. Shadow of the Tomb Raider: Even though this isn’t a straight up gaming machine, we still got some great framerates with the ray tracing tuned all the way up, breaking 100 at FHD, and not a huge drop off as the resolution goes up. Final Fantasy XV: We got the same impressive performance with Noctis and his crew at FHD, allowing a “very high” experience. Even at 4K this unit can provide a standard gaming experience for a graphically intense game. We took a tour through our XBOX Game Pas library with Chorus to see how gaming with ray tracing looked. We got great performance at 1080p with ray tracing on, and still got a decent experience tuning the resolution up to 2560.

The ThinkBook 16p is a gamer at 1080p for sure, with the ability to pump of some graphical settings and maintain good performance. On the office and productivity front this has enough firepower for light CAD work that doesn’t require workstation-grade Quadro graphics and can easily handle most photo and video processing in Adobe suite. The 500 nit screen is super bright when we’re running at full brightness, and it was still a good look at 60%, unlike some other models that seem to be too dim at that level. We started with some media consumption with Netflix’s Untold: The Girlfriend Who Didn’t Exist chronicling the epic catfishing of Manti Te’o. Fascinating story really that we highly recommend.

After that the 16p became my daily driver, complete with remote sessions, site visits, writing pages of tech documentation, and also of course catching some preview clips of the upcoming (well now out) God of War: Ragnarok on YouTube. Also of course to write up some of this simply fantastic content. Lenovo advertises a bit over 9 hours for this notebook, and we were able to get a little over 7.5 hours before it tapped out. With rapid charge ability we were able to get back up to 50% in about 30 minutes as advertised.

The ThinBook 16p is a great balanced machine for folks that need to multitask and want one machine to handle their world – assuming their world doesn’t include the extreme ends of the spectrum between productivity and gaming.

We love that kind of work and play functionality the 16p provides, and for folks that need work features, mobility, and 1080p gaming all in one machine this is an attractive option. The drawback though is that balance comes with a price tag, and will start at $2,320 for a Ryzen 5. One the one hand, that’s pretty high for someone who picks up multiple machines for work and play. On the other, this is the only machine a lot of users would need.

As some may say it’s a jack of all trades but a master of none. But we can’t forget the other half for the multitaskers out there – that’s far better than a master of one. We really like this one as an all-in-one notebook to cover all the bases.

November 9, 2022
Our Review Process
Latest Reviews
Where to?