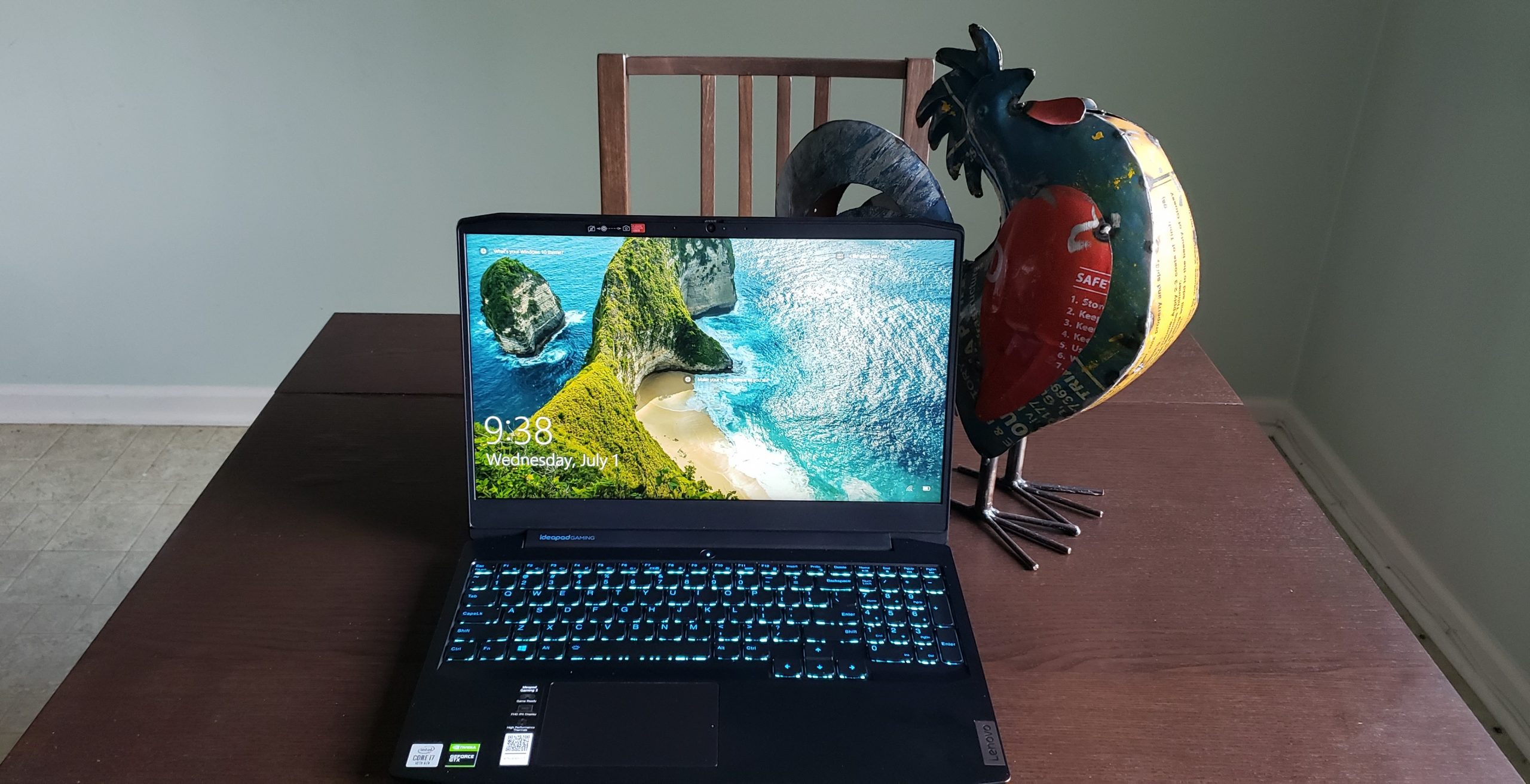 Excellent value at under $1k

The world being on fire hit us with a bit of a delay, but we finally have our hands on some of the new laptops from Lenovo’s 2020 slate.  We have the Legion 5i for later this week, but for now we’re taking a look at the 15″ IdeaPad Gaming 3i. It’s not Legion branded like its straight up gaming cousins, and is built to be a more of an affordable entry-level gaming machine. There’s a lot of the same hardware, so let’s as always take a look at what my model was packing before we continue: As mentioned above, the IdeaPad Gaming 3i is an entry-level gaming laptop. That being said, starting at 4.8lbs and under 1″ thick, it packs some fairy impressive hardware for every available model coming in south of $1,000. The 10th generation i7 and GTX 1650 are respectable for the price, but are specced a bit lower than the new Legions, where the 4GB edition of the GTX 1650 is the base card, upgradable to RTX. But then again, those can come in well north of $1,000.

Starting with a nice smooth lid on top with a subtle Lenovo logo, this machine has an interesting shape. The IdeaPad cuts angles on the corners, maybe a slight leftover from former generations of Legions and the Y-series of yore. That angled design is consistent on the indentation for the keyboard instead of being cut at right angles. The lid opens up to a webcam at the top of the screen, which was a pleasant surprise – one of the things I didn’t like so much about the last generation of Lenovo gaming was webcam placement at the bottom of the frame. Yeah this placement makes the top bezel a little wider, but it works much better for video calls. There’s also a physical privacy shutter for those who want to be able to have visual confirmation that no one covertly has eyes on them.

The screen was bright and was a nice 120Hz panel but I had to have it near max brightness most of the time, and the color representation wasn’t as sharp or crisp as Legion gaming displays. That didn’t really dampen my gaming experience, and if you’re hooking this up to an external display via HDMI then it matters a little bit less. However it was clear that this was part of a budget screen, and side by side with the Legion 5i the difference was immediately clear.

The bottom half features a nice keyboard though. It has an optional subtle light blue LED glow, so you can have some lighting without getting crazy, letting you pull double duty with this for work and play. The keyboard actually looks and feels the same as it does on the higher-priced Legion 5i, but both definitely borrowed some things out of the ThinkPad playbook with the broad keycaps with low soft motion. It felt good to type and I wasn’t making too many errors in my drafting my docs. You can see the 3i side by side with the Legion 5i here (the 3i is on the right) – both feature a full numpad and similar key style.

As far as port placement, it stays consistent with other IdeaPads keeping them on the sides. The 3i comes with 2x USB 3.1, a USB-C 3.1, combo headphone/mic jack, and RJ45 ethernet port in addition to the power port and Novo hole. It’s a decent number of ports for the price, especially that it includes USB-C. The one thing about the build is that the feel isn’t as substantial and dense as I experienced with the Legion 5i and previous Legions. I have to make that comparison because the 3i is a gaming machine too, and I had the good fortune of being able to have both systems in house to make those direct comparisons with.

It still manages to keep that sleek and professional look. It’s smooth, simple, and will still look good sitting on your desk when not in use. And the additional control over cooling and performance features through Lenovo’s Vantage control panel really keep the 3i cool on your lap and let you make some performance tweaks. I started testing this out as a pure media machine, spamming episodes of Ancient Aliens on Netflix as far as it could go. I ended up getting about 1 hour of Netflix per about 16 or 17% of the battery life, letting the media flow for just about 6 hours before the battery called it quits. That’s not bad, and covers the time for a coast to coast flight from Philadelphia to Los Angeles, or a trip across the Atlantic from Philadelphia to London Heathrow. Decent.

Using it as my work machine for a week which is mainly Microsoft Office / Enterprise applications, Zoom calls, and on-site tech work, I was able to get about 7 hours out of the IdeaPad before I needed to set it on charge. Once I did I was able to see the quick charge capability of the unit, getting me back to about 75% in roughly an hour, which is a great feature that minimizes downtime for charge. For my line of work as an IT pro I was happy to have an ethernet port at my disposal, since a lot of business machines have abandoned the RJ45 for a thin profile and wifi.

The graphics options for this unit max out at a GTX 1650 4GB, but that doesn’t mean that you can’t play the latest games. You might not be able to play with the settings completely maxed out, but that’s not always as bad as some reviewers make that sound. Not everyone is a super hardcore gamer or an e-sports superstar. To put the unit through its paces we played around some in World of Warcraft to see if tons of players cramp its style, and then some more formal tests from to see how it handles some more graphically demanding games. Riding around in Stormwind didn’t give me any guff – on the ground packed around the auction house I was getting about 70-75 fps, and got bumped up to 78-90 when I took to the skies where the traffic was less dense depending on how many structures were around and how far out I was looking. This was on max settings across the board. The first formal test was the Shadow of the Tomb Raider benchmark. At FHD on “High” settings we were able to get an average of 56fps, maxing out around 100 fps during the test. “Very high” gave us 46 fps, which in my opinion is still playable. As a comparison if we look at last generation’s Legion models, the Y545 with a GTX 1660 Ti was able to hit 70fps on high – a reminder of what base specs in Legions are capable of.

Final Fantasy XV Windows Edition was up next. Square-Enix is kind enough to provide a system benchmark to see what kind of experience you would have, and I also just ran through the world of Eos with Noctis and his buddies so i figured it was appropriate. On “Standard” graphic settings at 1920×1080, the IdeaPad 3i came back with a “Fairly High” score, meaning we can expect to be able to make tweaks and upgrades to a standard game experience at those settings. Bumping the bench up to “Very High” graphic settings, we would still be able to have a standard game experience. Watching the game benchmark on both settings though I didn’t see any tearing, any skips or jumps or any lag or lack in smoothness. It still looked nice and smooth.

All in all I’d call this a fairly strong performance for a sub-$1k machine for sure.

Lenovo’s IdeaPad Gaming 3i is a great option for folks that are looking for a gaming laptop without wanting to spend the bucks for a Legion. The price definitely comes with tradeoffs – as mentioned above the graphics options max out at a GTX 1650 4GB. Available models also limit memory to 8GB. They still come with high-grade 10th generation Intel i7 processing, which allows this to perform at good spec. You won’t be able to run everything with all of the settings tuned all the way to ultra, but this will get you a very comfortable gaming experience without breaking the bank. And with battery capacity that can last an entire work day and subtle LED lighting, the 3i can definitely double as an everyday or work machine. You can check out current models at Lenovo here.

Final Verdict on the IdeaPad Gaming 3i? A no-frills gaming machine that lets you play without emptying your wallet. It’s JV to Legion’s varsity squad, but that ain’t a bad thing

July 6, 2020
Our Review Process
Latest Reviews
Where to?