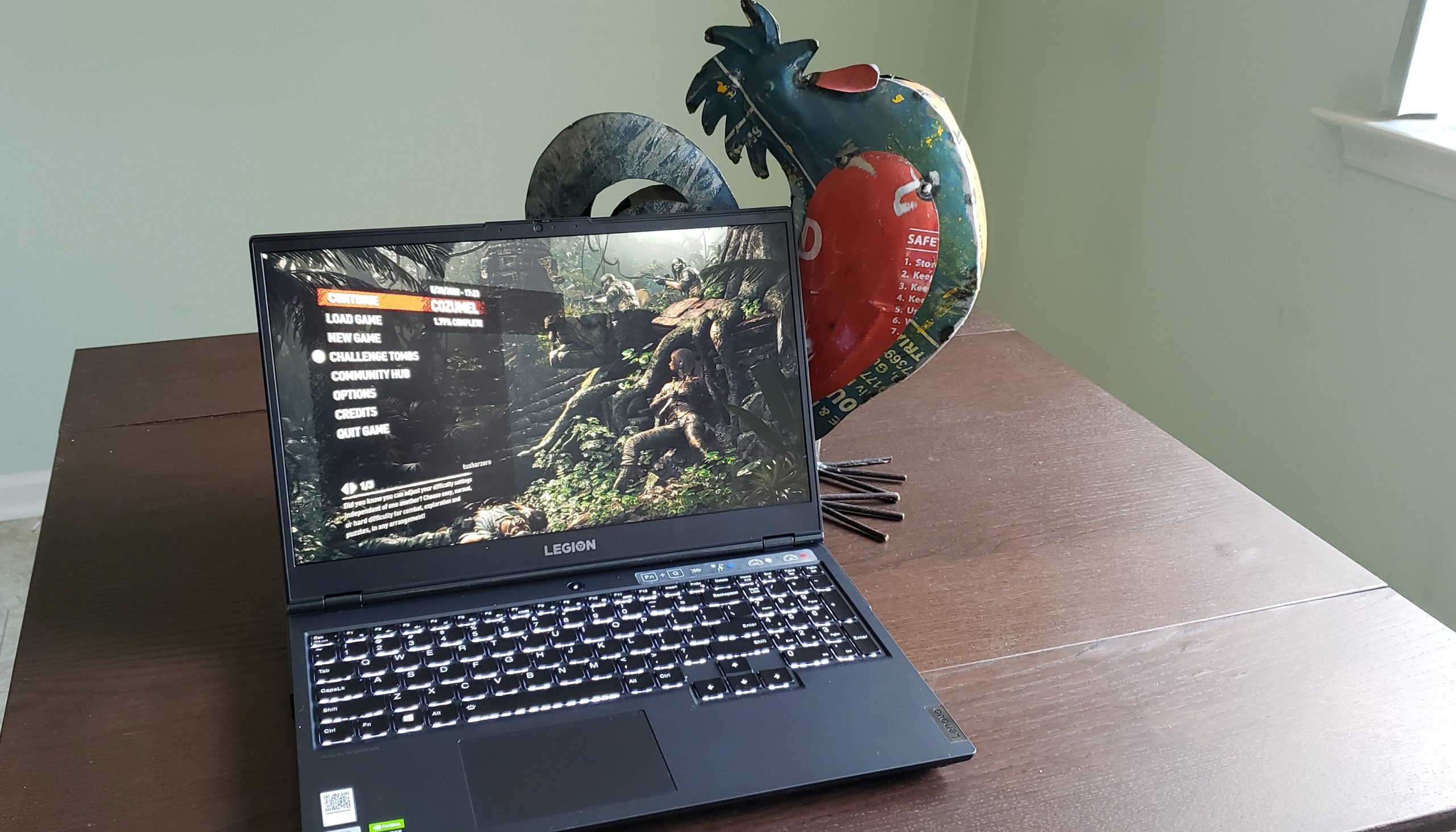 Dimmer screen than some of its ThinkPad cousins

Say adios to Lenovo’s “Y” naming convention. The Legion army of laptops has gone through a bit of a makeover, with an updated simplification to the model numbers. There’s the 5 and 7, and an “i” denotes Intel processing versus AMD. Today we have the 15″ Legion 5i, starting at $999 for the i5 / GTX 1650 model with the top end maxing out at under $1,300. Though that’s still a solid price for a budget rig, it’s a step up in quality from the non-Legion branded IdeaPad Gaming 3i, which you can read about here. So as we begin our tests, as always here are the specs of my review model: No more textured lid! The previous generation of Legions were solid laptops but my personal preference on the lid is that it is nice and smooth, which the new Legions come equipped with. The design shows a minor refresh from the 2019 Legions, keeping that industrial feel, though slightly muted, with a fold-flat hinge on the display panel. The main (and welcome) change on the display frame is the repositioning of the webcam to the top with a physical privacy shutter. Yes that makes the bezel a tiny bit fatter up top, but for someone who has been spending most of the last couple of months on Zoom and Teams, it’s a better experience for my work life. This also translates into a better streaming experience on the gaming side than the last generation’s positioning at the bottom of the screen. The display panel itself is advertised at 300 nits brightness, but it doesn’t quite feel like it hits that. However it does have great color representation with DolbyVision and 144Hz refresh.

The bottom half has a good keyboard with a nice feel and action. Typing was easy and I was thankful for the full size arrow keys to the left of the numpad like I have on most of my desktop configurations. My model had a nice subtle white LED backlight to the keys, but 4-zone RGB is also an available option for certain models if you’re feeling more comfortable in your living room without the need of a bit of subtlety in the board room. They kept the port positioning from the last generation, with a USB for convenience on the left and right sides with the novo hole and headphone jack, with the bulk of the ports in the back. All in all there’s a good distribution of ports – 4x USB-A 3.1 Gen 1’s (1 always-on), headphone/mic combo jack, RJ45 ethernet (praise be), USB-C 3.1 (DisplayPort), and HDMI for the main display. USB-C is becoming much more common in modern laptops which allows a lot more device interoperability, but I will still celebrate the RJ45, which allows me to dabble in work as well as play with this one.

The 5i is definitely a sturdy unit with a solid build, primarily using PC/ABS as the case materials. The unit starts at 5.7lbs with dimensions of 14.3″ x 10.2″ x 0.93 – 1.03″ – the variable tenth of an inch difference in thickness relying on how much you trick your 5i out. The lower tier i5 models will be on the 0.93″ side, but as you work up to the i7/RTX combinations you’ll see it get just a bit thicker. To me it’s really not a big deal – a tenth of an inch doesn’t make a difference in whether or not it fits into the sleeve of my bags. So while the exterior and chassis may not have gotten a complete overhaul, some of the software-driven changes are what make the 5i shine a bit more brightly than last year’s models. In addition to settings like Hybrid Mode in the built-in Vantage software and some voltage/thermal settings, the 5i uses NVIDIA’s Optimus technology for GPU switching to save battery power. The LED in the power button actually represents the thermal and system voltage settings you’re working with for an easy view. A white light shows balanced, blue shows “quiet mode,” and red shows “performance mode,” which is only available when plugged into AC power. I’ll get into more of these details in the gaming and everyday tests below, but the TLDR version is that the 5i can be tuned through Vantage to an on average 5% performance bump while on AC power and an impressive battery stretch to over 6 hours while off power and not gaming. Since we were working with an RTX 2060 6GB we ran some tests with and without ray tracing using the Shadow of the Tomb Raider benchmark, which allows for both. As expected with 10th gen Intel power and one of the high-tier cards from NVIDIA, we got some good numbers and very very very pretty gameplay. With traditional shadows and the settings both at “ultra,” we were seeing 73-76 fps at 1920×1080. Once we replaced traditional shadows with ray-traced shadows, the framerate did take a big hit, but to me not enough to affect gameplay. Again with all settings at “ultra” at 1920×1080, here’s the array of average reads we got back:

Even at 43 fps the gameplay was smooth and 100% playable, and for those who look for what ray tracing can provide in shadow detail, the difference is noticeable on the laptop, but even more so piping the video out to a large gaming monitor. Next up was the Final Fantasy XV Windows Edition video benchmark. On “Standard” settings watching the benchmark was great, and the smoothness and quality of the animations honestly looked better than FFXV gameplay on my PlayStation 4. The bench score came back with a “high” rating, meaning that you can jack those settings up to enjoy a far better than average game experience.

On the 3DMark Time Spy test, the 5i scored a 6019 overall (5854 graphics, 7171 cpu) which falls right in line with other gaming laptops from Razer and Acer that are packing the same hardware. Machines that beat this score were either running i9 processors and/or RTX 2070/2080 cards. Needless to say games that don’t benefit from ray-tracing capabilities ran on the highest settings super smoothly and with no issues whatsoever. The 1TB SSD let maps or worlds be loaded in a matter of seconds, with the video card able to render in even less. For example World of Warcraft broke 100 fps before breaking a sweat.

Something to be noted on the gaming test – changing the operation mode to “Overdrive” and the thermal mode to “Performance” did provide some enhancements and small fps bumps in everything I listed out here. This came out to about an 8-10% bump in fps on Shadow of the Tomb Raider, and while it still registered as “high,” about a 4% bump in score on the FFXV bench.

Just for kicks I started in pure media mode to see how long this machine could last with full screen brightness and without battery saving measures just running video streams and doing nothing else. Starting at the beginning of Netflix’s new original series Warrior Nun, i got 3.5 hours of pure unadulterated high grade media streamed to my Samsung Smart TV. Sure, not really representative, but fun.

My real #1 stat for a laptop when I’m not gaming or consuming media by the gallon is battery life, and I switched up all of the settings to do so. Lenovo advertises the 60Wh battery inside my review model to be able to go for 6.8 hours, so that’s the target I was shooting for. After a full charge I took it out of performance mode and off AC power, switching over to hybrid mode and seeing how far the power saving combo would get me with Optimus doing its thing in the background. I replaced my normal work laptop with this one, taking it site to site and troubleshooting systems remotely over wifi. Back at my home office came the standard routine of swimming in the sea of Microsoft’s Office 365 apps for various document writing and editing. So far nothing too crazy.

The work that really tests laptop battery based on power needed is running queries on SQL databases that would make the average user collapse. The 5i was able to put its 10th gen 17 and 16GB of DDR4-2933 to work to bust through those without having to wait for more than 20-30 seconds for data refreshes. Additionally taking a couple of breaks to watch some scenes from the classic Clue and newer iteration Knives Out (what can I say I was feeling sleuthy) we finally approached the end of our battery bar. At 6 hours and 12 minutes, Windows 10 finally said “we’re done.” It’s lower than the advertised 6 hours and 48 minutes, but in work mode I do have to push my tech a bit harder than the standard user. I was impressed with how the customization let me hit the 6 hour mark before battery saver finally shut the laptop down. I had to struggle to get 5 out of the Y545, and the Y740 (also with an RTX card) got me 3. If you can get 6 hours out of a dedicated gaming laptop, that adds a ton of value for using it for your non-gaming life as well. And with the quick charge option, once you hit zero you can be back up to 50% in about half an hour.

As we said at the top the base model of the 5i, which is still a junior model in the 2020 Legion line, starts at $999. The model I had for this review which had a 10th gen i7 and an RTX 2060 upgrade will run you closer to $1,300. That in itself is a pretty good statement – for under $1,500 you can get ray tracing power with an RTX 2060 6GB, and still be able to play most of your games full out without issue. the 5i is a solid gaming build, and with enhancements and battery-saving features I’d be happy using this for double duty work and play.

(and on a personal note, long live the RJ45)

Final Verdict on the 5i? Every generation of the Legion brand shows improvement, and the 5i is a tremendous minimalist gaming machine that will perform like you need it to.

July 22, 2020
Our Review Process
Latest Reviews
Where to?