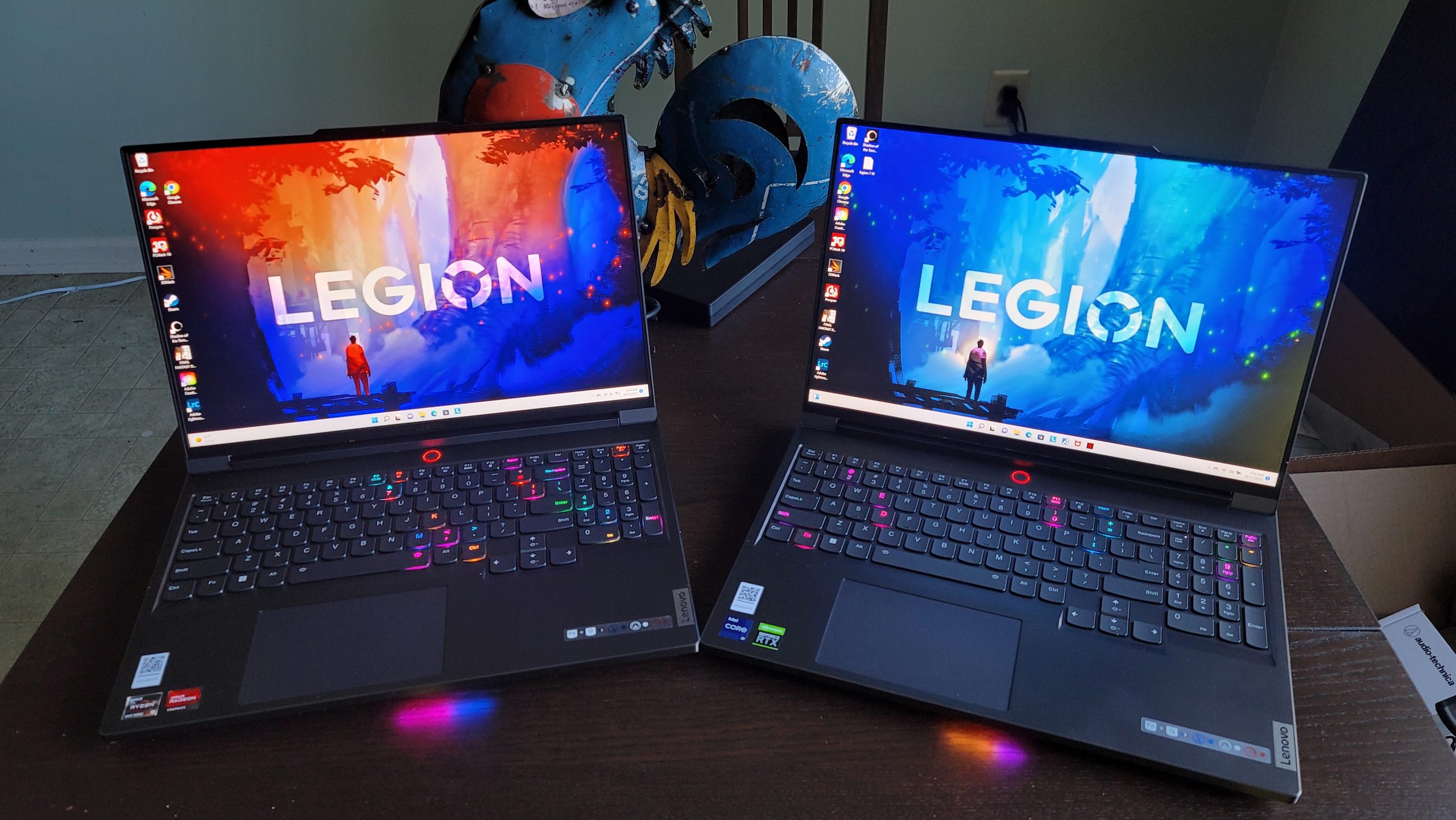 Options for the highest-end Intel/AMD/NVIDIA hardware

AMD/Radeon-based 7 feels underpowered compared to 7i

Stays cool, but fan noise can be big under heavy load

Now that things are kind of available again, we’ve got a slew of laptops to run with to review through the fall – the first being a pair of Lenovo’s flagship gaming notebooks – the AMD-based 7 and Intel-based 7i. We got to test them side by side, and in short they’re both monsters of machines. Right now they start at $1,749 and $2,079 respectively. Before we get into it, here are the specs of our top-end review versions – and throughout this article we’ll have Intel-specific data in blue and AMD in red to make it a bit easier to read.

Because hey, we care. You might be asking yourself what the difference is between these and the Legion 5 Pro that we ran a little while back. The 5 Pro runs AMD processors and NVIDIA GPU’s up to an RTX 3070 Ti. The Legion 7 gives you the option to run either a full AMD system with Ryzen processing and Radeon graphics, or go the Intel/NVIDIA route with higher spec options.

In either case, we’re running the topline models of both. And for both models the build is identical – Same 16″ WQXGA screen at a nice and shiny 500 nits, same anodized aluminum chassis, and the same ports around the outside we’ll detail momentarily. The biggest difference physically these notebooks provide over the 5 Pro is the super-premium feel you get with the 7. The 16″ notebook weighs in at 5.51 lbs, and measures at 0.78″ x 14.17″ x 10.33″. With the huge specs we’re given, we’re still looking at notebooks that are less than 1″ thick the same as the 5 pro, and heavier by just a hair. To support those higher-end cards the Cold Front 4 cooling system is tuned to overdrive on the 7’s, with thinner fans stronger by 20% and more intakes and outputs for air flow designed for over 175W thermal capacity. When we kicked the notebooks into performance thermal mode, we were able to feel the ridiculous increase in airflow over previous Legion models, but it did also keep temperatures low enough that our laps and hands weren’t burning while loading up our benches and games. For layout, we get similar options as the 5 Pro and other Legions, with a nice TrueStrike keyboard that has per-key lighting (as well as lighting around the base of the notebook, vents, and the LEGION logo on the lid) through Lenovo’s Spectrum lighting system. Above the 500 nit screen is a webcam at the top, with the e-shutter control switch for it on the right side of the deck. What’s also cool is that in the box is also a set of 4 sleek keycaps and switches, along with the tool to replace them. I see 4, and to me that says “WASD” but I guess that’s not a requirement for everybody.

This is the head-on contest we were looking to test. Intel’s i9 12900HX and NVIDIA’s 3080 Ti versus AMD’s Ryzen 9 6900HX and Radeon RX 6850M XT. Both models otherwise have the same memory and other hardware specifications, including the 165Hz screen.

3DMark Time Spy: In the DirectX 12 contest, the 7i scored a 13,247 and the 7 scored an 11,350. The AMD version scored about the same as the 5 Pro with the performance jump coming from Intel/NVIDIA.

3DMark Port Royal: Ray tracing capabilities were on the table next. The 7i reached 8,417 – one of the highest scores we’ve reached on this test (for laptops, excluding server-grade processors and multiple Quadro cards). The 7 only got up to 5,046, which actually was a lower score than the 5 Pro.

3DMark Night Raid: Night Raid is made for integrated graphics but hey, testing is testing. The 7i scored 55,113 while the 7 scored similarly to the 5 Pro with a 49,635.

Procyon Photo/Video Editing: On to the test for creators, running Adobe suite. Photoshop and Lightroom Classic gave us 10,163 for the 7i ad 7,368 for the 7. For Lightroom video editing, the 7i scored 7,801 and the 7 scored 5,881. Once again the AMD version was beaten by the 5 Pro. Shadow of the Tomb Raider: Both models let us hang out with Lara at at least 30fps with the settings tuned all the way up, but the Intel/NVIDIA model showed a marked increase in performance over the AMD edition. Final Fantasy XV: While both notebooks would give you a minimum a “normal” experience in 4K with all the bells and whistles on, the Intel/NVIDIA model takes a small edge.

We tinkered a bit with some of the XBOX Game Pass offerings that could manage ray tracing, and on titles like Deathloop we didn’t have any issues, and regardless of what we found between the two models, both gave us a great gaming experience.

These notebooks have some serious chops, so we toned them down a bit to run our real life tests. We worked on wifi, with the thermal/battery mode in balanced, and the screen brightness at 60% in Windows. To begin we did some streaming with a few episodes of Netflix’s Cyberpunk: Edgerunners. After that we used both machines as our daily driver- this means documents and work in Microsoft 365, Remote desktop sessions to do deploy some fixes, and yes, even taking a break occasionally to see what the latest was that my YouTube feed had to offer. While we found some differences in the performance tests above, we did find some differences in battery life, but going the other way.

There’s no advertised hours estimate from Lenovo for their 99.9 watt-hour internal battery, but with high end hardware and a very bright WUXGA screen my guess going in was about 5 hours. I was pleasantly surprised by both models. The 7i lasted for about 6 hours, while the 7 really surprised us, hitting a little over 7 hours. For gaming laptops with these kind of specs this is really quite good – I’ve had older generations of top-end gaming laptops tap out after just over 3 hours before.

So on battery, the AMD hardware wins. Both have quick charge capability so you’re never down for long, but you’ll get more life out of the  AMD edition 7.

7’s a lucky number and we got some great results from both of Lenovo’s 7th-gen Legion 7 and 7i. Running them head to head we did find though that the Intel/NVIDIA hardware was really ahead on performance, and the area where AMD took the win cleanly was in battery efficiency. Both are solid machines but there is a reason that the AMD editions cost less than the Intel-based systems. Based on our testing, in our opinion if you want the AMD ecosystem the Legion 5 Pro would be just as strong of a buy – it seems to us that AMD procs with NVIDIA cards seem to perform at the same spec or better than the full AMD kit.

The 7i however was one of the highest-performing notebooks we’ve ever reviewed here, and definitely the highest-performing gaming laptop we’ve seen at TF, including previous generations of the same laptop. For us that’s our choice – we’ll take the lower battery life since the rapid charge is never going to keep us without juice for that long.

So in short, very strong offerings, but the 7i wins.

October 19, 2022
Our Review Process
Latest Reviews
Where to?