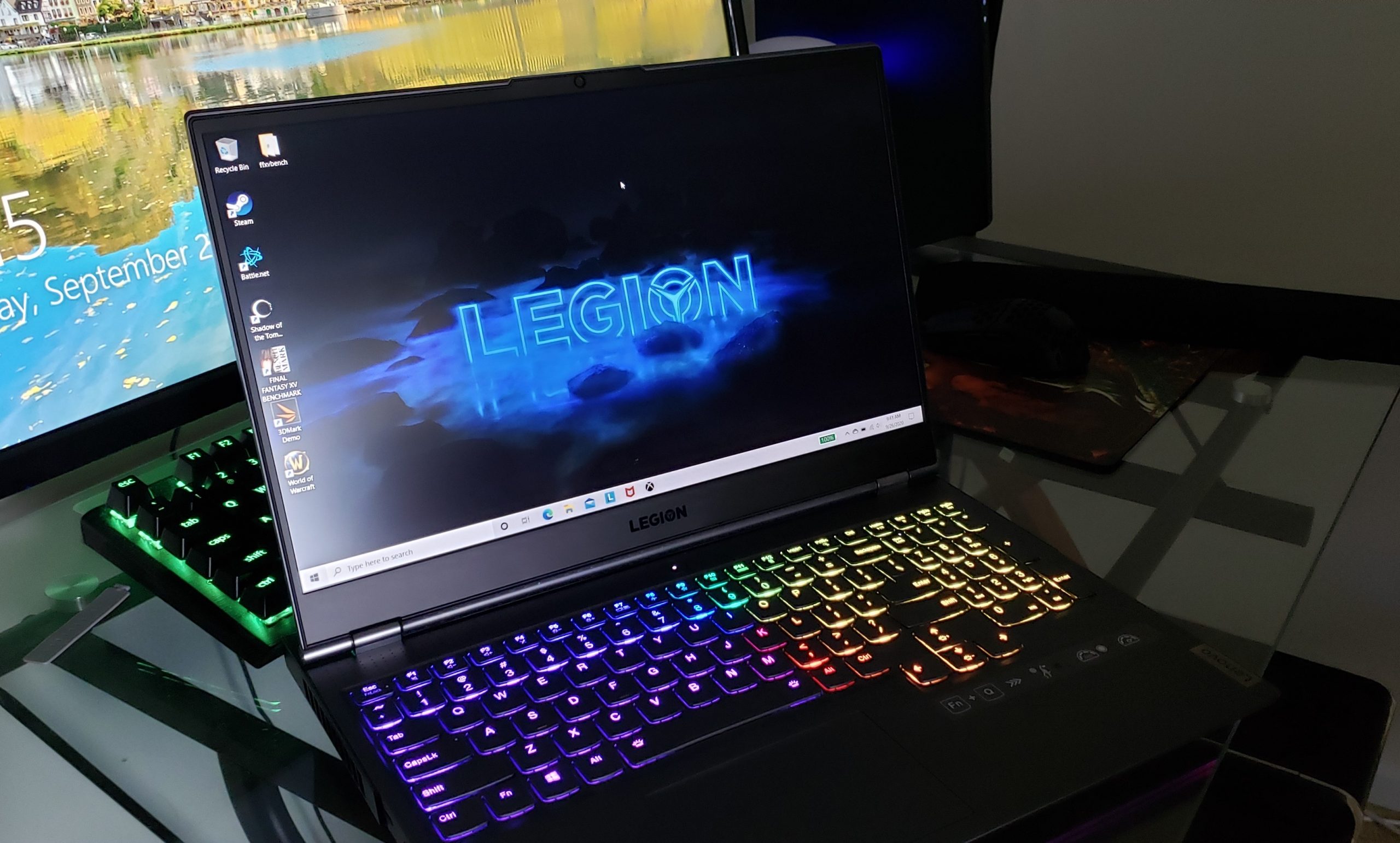 Pretty thin and light for the power inside

Rapid charge capability keeps you up when you're up and about

Fresh from last month comes Lenovo’s Legion 7i gaming laptop, the 15″ flagship of their current 2020 models, starting at $1,529.99. We took a look at its younger sibling the 5i a little while ago, so we get to see how much difference a couple of numbers make. Holding on to the same spirit, the 7i does indeed have a few spec upgrades from the 5i – and here’s some of those specs on the review model I got to play with: The overall build quality of the 7i makes it appropriately feel like a flagship device. The full PC/ABS plastic builds have been replaced with aluminum upgrades for the lid and base, giving it a solid feel. Outside of the material changes, the physical layout of the 7i is similar to other Legions, with a 180-degree lay-flat monitor hinge and a webcam with hard security switch in the top of the frame. And at a starting weight of 4.6lbs and 0.8″ thick, it’s easy to shove in a bag.

As other Legions packing NVIDIA cards do as well, the 7i features NVIDIA Optimus technology as well as its own features like hybrid mode in their own Vantage software. This is designed to help the life of the 80Wh battery by scaling back the GPU power while doing relatively mundane things like desktop processing. The advertised life of the battery is 7.7 hours – we didn’t quite hit that in our tests but you’ll see the results in our Everyday Test section. On top of build quality, RGB LED’s run the show visually throughout the chassis. In addition to just a backlit keyboard, whatever lighting you choose also shows up in the “O” in the Legion logo on the lid. A third zone is a U-shaped strip that runs around the bottom half of the laptop, which illuminates not only the strip itself, but the vents at the back as well as the USB port on the right. All of the lighting is customizable through the built-in Corsair iCUE control panel with a number of options for whatever mood you’re in. You can go as subtle as you’d like to a legit screaming level of LED brightness.

While other Legions max out at an i7 and RTX 2060, the 7i removes the cap, allowing for up to Intel’s latest i9 processors, NVIDIA’s RTX 2080 Super Max-Q 8GB, and 32GB of memory. This will run the price tag up to nearly $3k and assassinate the battery for sure, but will provide an insane beast of a gaming laptop that would handle pretty much everything you throw at it. Combined with a very nice FHD screen at 144Hz at 500 nit brightness, gaming on it is simply a joy. I was working with the 144Hz 500 nit screen, but the option for a 400 nit, 240Hz refresh rate is also available.

As far as connectivity we have ports a plenty on all sides of the unit. While a USB 3.2 gen1 flies solo on the right side (beautifully illuminated might I add), the left side gives us our headphone/mic combo, a USB-C port, and a Thunderbolt Type-C port. On the back in addition to the power port are 2 USB 3.2 gen2’s, an HDMI out, RJ45 ethernet, and a lock slot. At this point I’ve given up my hope on all machines everywhere that they bring back the greatness that is the SD slot, but I digress.

The model we’re running with has the same i7-10750H as the 5i laptop we reviewed a little while ago, but with an RTX 2070 packed inside, we were expecting better results on graphical performance. We ran it through our steadily evolving “standard” battery of benches and tests to see how it fared. To get the ray tracing test out of the way, we first look at the Shadow of the Tomb Raider benchmark. at FHD the game still looks beautiful without ray traced shadows, but visually there is a noticeable and excellent difference when we have them turned on. With everything else by default tuned to the “highest” settings, we were able to hit an average of 89fps with traditional shadows set to ultra. With ray-traced shadows cranked up to ultra, we were able to get an average of 56fps. There’s a pretty vast grey area in there you can tweak your settings to – just dropping the quality of the ray tracing by one click will let you break 60fps. But the ray traced shadows just look so good, that once you’re used to it there’s a noticeable drop in visual quality by turning them off, even if it does max out your framerate. The Final Fantasy XV for Windows benchmark showed a much more marked graphical power increase over the 5i and its RTX 2060. On standard settings, the 7i hit “very high” with a max score of 10,143 over 3 runs – a 20% bump from the Legion 5i laptop. Even when running the benchmark on high settings, the result was “high” with a score of 7,677. It should be noted that both of these tests were at FHD (1920×1080). On games that don’t support ray traced shadows and are shall we say – more mainstream on minimum specifications, the 7i performed like a champion as expected. For those of you who are fans of Blizzard’s portfolio, Overwatch and World of Warcraft ran with no issue with everything turned up. World loading times and rendering in the realms of Azeroth were next to instant thanks to not only the CPU/GPU performance, but also a nice and speedy PCIe SSD.

3DMark’s Time Spy OpenGL test came back with a score of 7192, which actually comes in a bit lower than other gaming laptops of the same grade like Asus’ ROG Zephyrus M15. This kind of surprised me based on the other benches I put it through, and as the end user I still didn’t feel any pinch in performance.

One thing to note outside of numbers is that the thermal management was noticeably good. You have some control over the fans with Q-Control, and some of the upgrades like four dedicated thermal channels kept it remarkably cool and quiet. I don’t expect I would have experienced the same with the i9/2080 Super Max-Q edition. We made sure we had a 100% charge before we got started, as well as a couple other changes – toning down the screen brightness to just above half, cranking down the iCUE lighting to a faint white backlight, and keeping hybrid mode on. Off battery the Vantage software doesn’t actually let you crank the thermal setting up to performance mode, which is a good thing since that would surely murder any expected time on battery.

By now you all know I love having an RJ45 network port on my laptops – it means I can use the review model as my everyday workhorse without having to find dongles or adapters to plug into racks and switches in my clients’ IT closets. So that’s precisely what I did. As a side note, I paired this with Lenovo’s ThinkVision M14T portable monitor for my test run as well for an easy USB-C second touchscreen. Starting the day taking the 7i to a couple of client sites both plugged into ethernet as well as switching to wifi back and forth for a couple hours, I came back to do a little paperwork in Microsoft 365 and Adobe Acrobat. After typing up about the first half of this piece I took a bit of a break for lunch, streaming an episode of Sherlock on Netflix while I had a sandwich.

Bottom line – My battery life was lighter that the almost 8 hours advertised – I ended up getting just a few minutes over 5 hours. I’m sure this could have been extended without the 90 minute Sherlock watch, but I don’t really run gaming units with the expectation of getting a full day out of them.  The tradeoff is the power. But Lenovo did have something in mind to combat that – The unit allows for rapid charging, so if you have the large brick of a 230W adapter with it, you can charge the 7i from 0 to 50% in a shade over 20 minutes. Great for your traveling “oh crap my flight boards in half an hour and I have no charge” situations.

Th Legion 7i is a straight up killer, and the strongest laptop Legion has to offer from their current line. It allows for the GPU to be cranked up to a 2080 Super Max-Q, as well as 10th gen Intel i9 processors. So my model wasn’t even the top-line configuration, but it still killed whatever I needed to do. The FHD 144Hz 500 nit screen I was using was a pleasant upgrade from some of the dimmer screens in previous generations, and I literally spent 30 minutes messing around with iCUE. This model starts at $1,529.99 for the i5/GTX 1660 edition (which would still get a lot done for you) and goes up to $3,199.99 for the i9/RTX 2080 Super Max-Q (which is currently on sale for $2,499.99) from Lenovo.

I would imagine though that as you scale the power up you are going to see a decrease in battery and a different experience with the thermals than I did. So balance your choice well – if it’s going to be on a desk 24/7 then might as well go all out – but I would recommend downgrading to this edition from the topline if you’re going to be mobile at all.

October 2, 2020
Our Review Process
Latest Reviews
Where to?