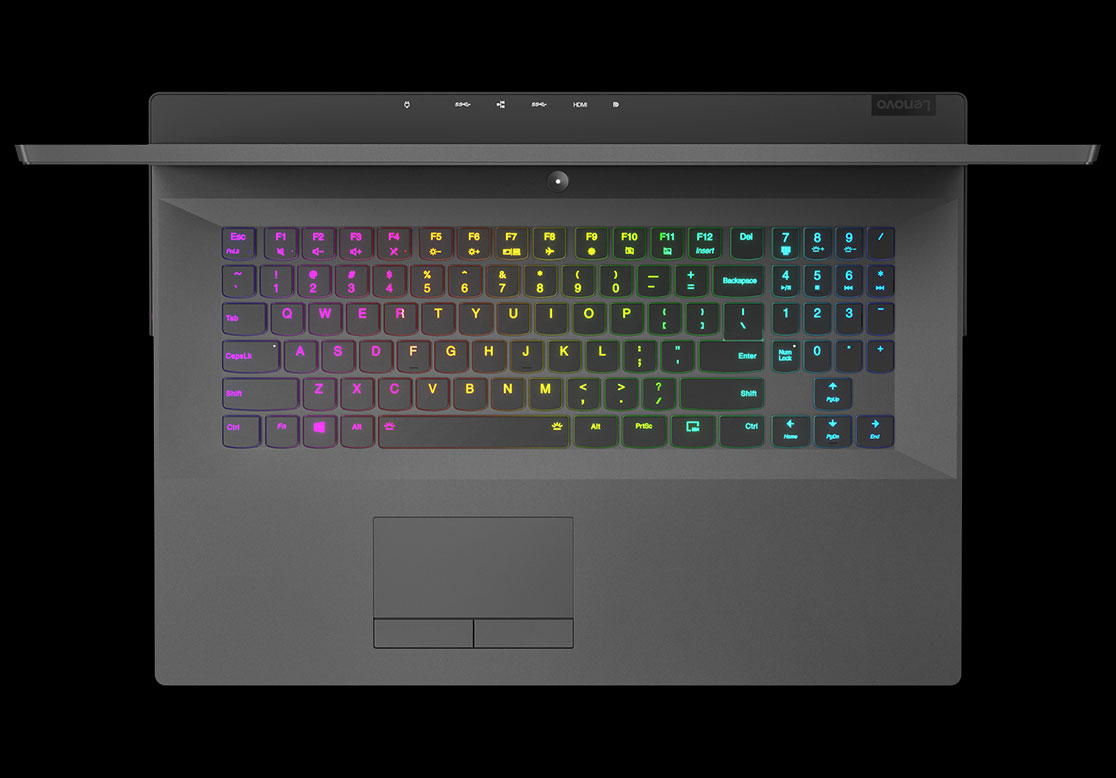 Needs more differentiation from the Y530

After checking out the Legion Y530 laptop, the Y730 was next on the menu. The review model I got to run with was a 17″ model, which I am very not used to, but it didn’t feel as large or heavy as what pops into my head when I hear “17 inch laptop.”

I am a big fan of the design of this new line of Legion laptops. What impressed me about the Y530 before was the fact that I felt like an adult using it, and I didn’t have to take it into client meetings with Ferrari exhaust style speakers or enough LED’s to call down ET’s mothership. I was very pleased that the Y730 followed the same design principles – it lent itself wonderfully to my multiclassing ways, without taking up an inordinate amount of space. Being a 17″ machine with the very thin bezels in this generation of Legions, I set it next to a system a couple of gaming generations older – the IdeaPad Y700 15″. And it was *barely* larger. It fit into my Timbuk2 bag without being bulky or taking up too much space. The super-thin bezels that Lenovo has for these new models really give us more pop for less space.

Like the Y530, the entire hinge for the display has been moved about an inch back.leaving space to tilt the display back to a full 180° and powering on the machine lights up the Legion “Y” logo on the lid. This model took care of my biggest gripe with the Y530, and that’s the lid texture. The Y530 had a ridged lid that really had a “nails on a chalkboard” feeling when i ran my hand across it. The Y730 has a smooth lid which thankfully alleviated that problem and made it more of a joy to use.

Opening up the laptop shows us the difference between it and the Y530 in the keyboard and lighting. The Y730 uses a Corsair iCUE RGB backlit keyboard, giving us a few more lighting options than the standard white lighting on the Y530. This model gives you some options on your lighting for the keyboard, side vents and Legion logo on the lid. In addition to solid color or no color, this keyboard gives a very cool “ripple” option. Every time you press a key, LED’s light outward in random colors like you threw a rock into pond. Check out the video to see some detail on what I’m talking about. The keyboard felt a bit more solid than the Y530 did, and was more fun to mess around with as you can see!

Like the Y530, the audio takes a little bit of a hit in the high end at high volumes. When the volume is turned up using the laptop speakers, there is some minor clipping and buzz for higher frequencies in the upper end. The clipping wasn’t there with either office or gaming headset or streaming through Chromecast, but on the laptop itself it is a noticeable thing.

As always, I put the laptop through its paces as if it were my everyday primary machine. With the battery in balanced mode and the screen at 30-50% brightness, I worked off of my home wifi with the keyboard lighting on, after downloading and installing all the things I would normally be using. I took the computer to a client site to do some work for them in a warehouse environment, running off of battery and wifi for the 3 hours I was there. After coming home, I took YouTube breaks and watched some West Wing on Netflix as well, even streaming it to the TV in by bedroom while folding laundry. The wifi held up without having to turn up the performance during the stream, and held up in perfect 1080p the entire way through while I kicked around the web Throughout the day I got about 5 hours before I needed to charge up. Rise of the Tomb Raider remains the test I always use. I mean, you should be thankful for my consistency on this point really. Given that the Y730 is running a GTX 1050 Ti, same as the Y530, I expected similar results from the test. And I was right:

Graphically, the Y730 performed pretty much in line with the Y530 with the same strengths and weaknesses, with he rendering for Geothermal Valley still a bit last-minute on this benchmark. The framerate was maintained well but it seemed like certain wooden platforms in the zone had a bit of a delay loading the textures. Similar issues didn’t come up in the Mountain Peak or Syria tests. In my review of the Y530 I said that it could be my one machine that I use for both everyday leisure, work, as well as play because of the way it balances everything. I can say the same thing about this unit. Since the hardware is similar for both models, this review is basically a comparison between this and the Y530. Between the two, the Y730 feels like it has a better viewing angle on the screen, and they keys also feel a bit more sturdy. One of the main differences for me was the keyboard itself and the lighting, being handled by Corsair’s iCUE instead of Lenovo Vantage. It just allows for some crazy color combinations that while are maybe a bit over the top at times, are still fun.

Outside of these differences, the Y730 is also the only model that is available in a 17″ edition, making it your only option if you’re looking for a large screen. But otherwise I would consider the Y730 an upgrade model to the Y530 line. Both can pack Intel chips up to 6-core editions and an nVidia GTX 1050 Ti graphics card.

All in all, the Lenovo Legion Y530 would more than satisfy my multiclassing needs. It has impressive battery life for a gaming machine, which could cover even a transatlantic flight, and the specs would let me sit down and game once I get where I’m going.

November 16, 2018
Our Review Process
Latest Reviews
Where to?