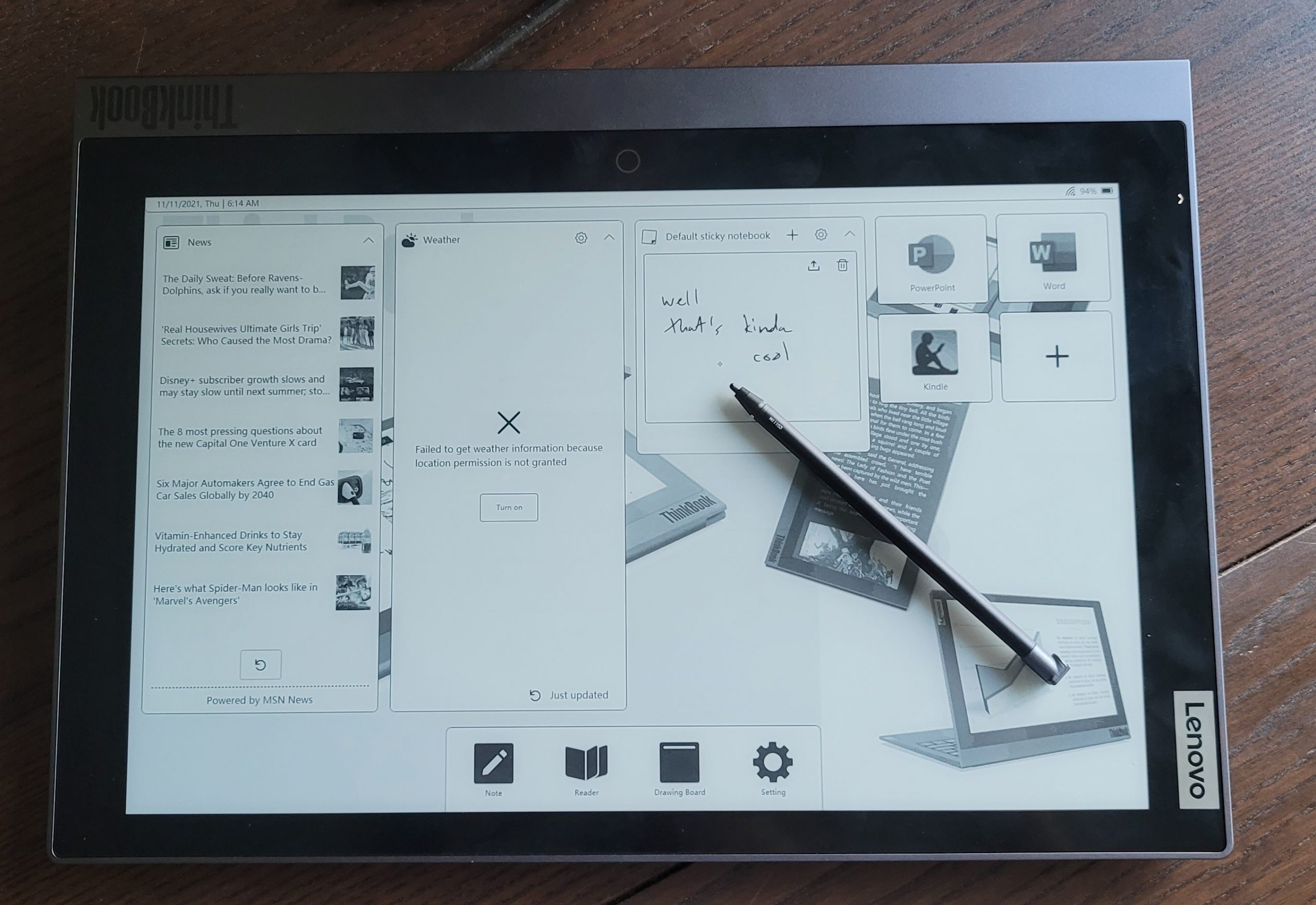 Low on ports, room exists for a card reader

This is Lenovo’s second iteration of a dual screen laptop with a twist – while we can open it up for a full color LCD screen, the lid itself is a second e-ink screen. This is the main feature of their ThinkBook Plus Gen 2, available now for $1,578 at Lenovo. The e-ink screen on the lid is larger than the last version, bumping the black and white real estate from 10.8″ to 12″ and running on Intel’s EVO platform we expected some battery longevity too. As always, our specs: We’ll save the e-ink lid for a bit further down since that’s the biggest twist on the otherwise “ThinkBooky” design the ThinkBook Plus follows. Made to be light and portable, it measures at  0.54″ x 11.73″ x 8.22″ to house its 13.3″ main screen, and weighs 2.55lbs. It’s constructed with an aluminum chassis to give it the sturdy and solid feel we’ve come to expect from Lenovo as well. Opening it up we have our 720p webcam with privacy shutter on the top bezel, with the bottom half being a nice springy keyboard without a numpad so users don’t have to squeeze to type. In between is a 2560×1600 touchscreen at 400 nits with quite good color representation for both work and consuming media. On the left side are two USB-C Thunderbolt 4’s along with the mic/headphone combo, and the right houses the power button as well as a garaged stylus that works with the e-ink screen and is also serviceable for the main color screen. Those 2 ports are all you get – the deck is almost too thin for adding USB-A’s, let alone an RJ45 for ethernet. We would love to see either a card reader or a WWAN sim slot in this form factor, but we would have to jump from ThinkBook to ThinkPad for that functionality. Now then, on that e-ink screen. It’s a neat feature that allows this device to have a bit of additional flexibility. Every time the lid is closed the machine asks whether or not it should continue in e-ink mode or just run on standby. Outside of that the machine can also be started without opening it directly to the e-ink screen. What we got was a near-standard Windows screen, with the difference being that it was more widget-powered than anything else. Angled more at being a good reader, in e-ink mode you have access to all of the files on the machine and read any documents you might have. If it’s not a PDF it converts it into PDF automatically to be able to present it on the screen.

This adds the great option of installing your e-reader apps and setting them as e-ink widgets. For example (while it did take a bit of font adjustment to leave “page back” and “page forward” bars) the Kindle for Windows app turned this notebook into a reader. You can see a sample of John LeCarre’s Tinker, Tailor, Soldier, Spy in the photo here. Otherwise, it serves as a good “at a glance” screen to show you your weather, new messages, notes, and apps with a quick look. It also lets you read documents on a sturdy e-ink screen so you don’t have to drain battery with your LCD display.

The included stylus makes it easy to jot things down using the note taking app for quick notes, and allows users to hook up an external display to use as a whiteboard in “drawing board” mode. The e-ink screen is very easy to work with for both reading and taking notes. It writes smooth, and there’s a round button to touch whenever you want to jump back to the main Windows e-ink screen. Open the lid back up and you’re back into traditional laptop mode. It was pretty seamless jumping back and forth between the two screensNow we’re looking at an 11th gen i7 with Iris Xe graphics, so we still ran it through our tests.

Using it as my daily driver felt pretty good, with real world performance (ignoring benches) falling right in line with Lenovo’s other ThinkBook and ThinkPad units that also ran Intel Xe integrated graphics and an 11th-gen i7. And as you’ll see after the benches, the tradeoff wasn’t that bad. This laptop also runs on Intel’s EVO platform, so there were expectations on how long this would last me.

The only issue we had on performance is that occasionally touch functionality on the primary display wouldn’t work after coming back from e-ink mode. For the most part opening and closing the lid was enough for a fix, but we’re not sure if that’s something that will be corrected in a future Lenovo update.

3DMark Time Spy: The DirectX 12 test gave us a 1,548 – not bad for an integrated Iris Xe chip, and beating the average office laptop score of 971.

3DMark Night Raid: Night Raid is more tuned to machines with integrated graphics, and the ThinkBook Plus scored 13,557. This beats the average laptop score of 9,408, and falls far short of the average gaming laptop’s 30,512. Shadow of the Tomb Raider: Forever looking for answers on if we can game without a GPU, we consulted with Lara Croft:

We didn’t really need to try testing with the settings turned up using an integrated Iris Xe. But in a pinch, if one is seriously jonesing for some games on a business trip, this could in theory work. Final Fantasy XV: Like the previous tests, this one was purely for curiosity, and without a dedicated GPU we tested at lower resolutions and settings:

No surprises here, though I am impressed it hit 4 digits. Both this and SotTR are actually… playable.

The ThinkBook Plus performed in the areas it was supposed to, and that’s primarily the PCMark 10 and 3DMark Night Raid tests. It’s an office laptop that benches higher on productivity than average, but to get those numbers I had to click into “extreme performance” mode on AC power through Lenovo’s built in Vantage control program. Cutting from that down to regular operation drops the SotTR bench by about 10 fps. As always, on wifi and a full charge with the screen brightness at 60% we were on our way – and as we mentioned a little ways above we were expecting a lot since this runs on Intel’s EVO platform.

In honor of Netflix’s upcoming live-action Cowboy Bebop, we started with a couple hours of the original anime, which happened to be one of my favorites coming up in the world of geekery. After a few episodes it was time for work, which was pretty Zoom-heavy during the time of test. I worked on some documents in Microsoft 365 with a couple of remote sessions to some of my sites, which was followed by a four hour Zoom seminar. When all was said and done, the ThinkBook Plus was on its last legs as the webinar came to a close. And that was right around the 9 hour mark. Now for an EVO laptop, the minimum specification is really greater than 9 hours, and Lenovo advertises 11 for this unit. But considering that 6 of the 9 hours were Netflix and Zoom, 9 is pretty good.

It still ticked the boxes for the rest of the EVO specs – it wakes from sleep very quickly, and the USB-C Thunderbolt 4 charging got us back up to 50% in just around 30 minutes.

Lenovo’s ThinkBook Plus Gen 2 is a good little business-grade portable notebook with an e-ink addition to take notes, get quick info, or hook it up with your team for full scale whiteboarding. Those perks will cost a touch extra though, as right now the i5 version is going for $1,578 at Lenovo. If the e-ink screen isn’t something you find use in, identical specs can be found in Lenovo’s ThinkBook and ThinkPad lines for under $2k, like the ThinkBook 13s Gen 2 and the ThinkPad X13 series. However, that price does also come with additional perks like a garaged stylus that works for both the LCD and e-ink screens as well as the fact that it’s a single device that eliminates the need to carry a second e-reader device while you’re on the go. It also lets you go the distance on battery for doc review in an easy-on-the-eyes tablet form factor instead of burning juice on the main screen.

November 15, 2021
Our Review Process
Latest Reviews
Where to?