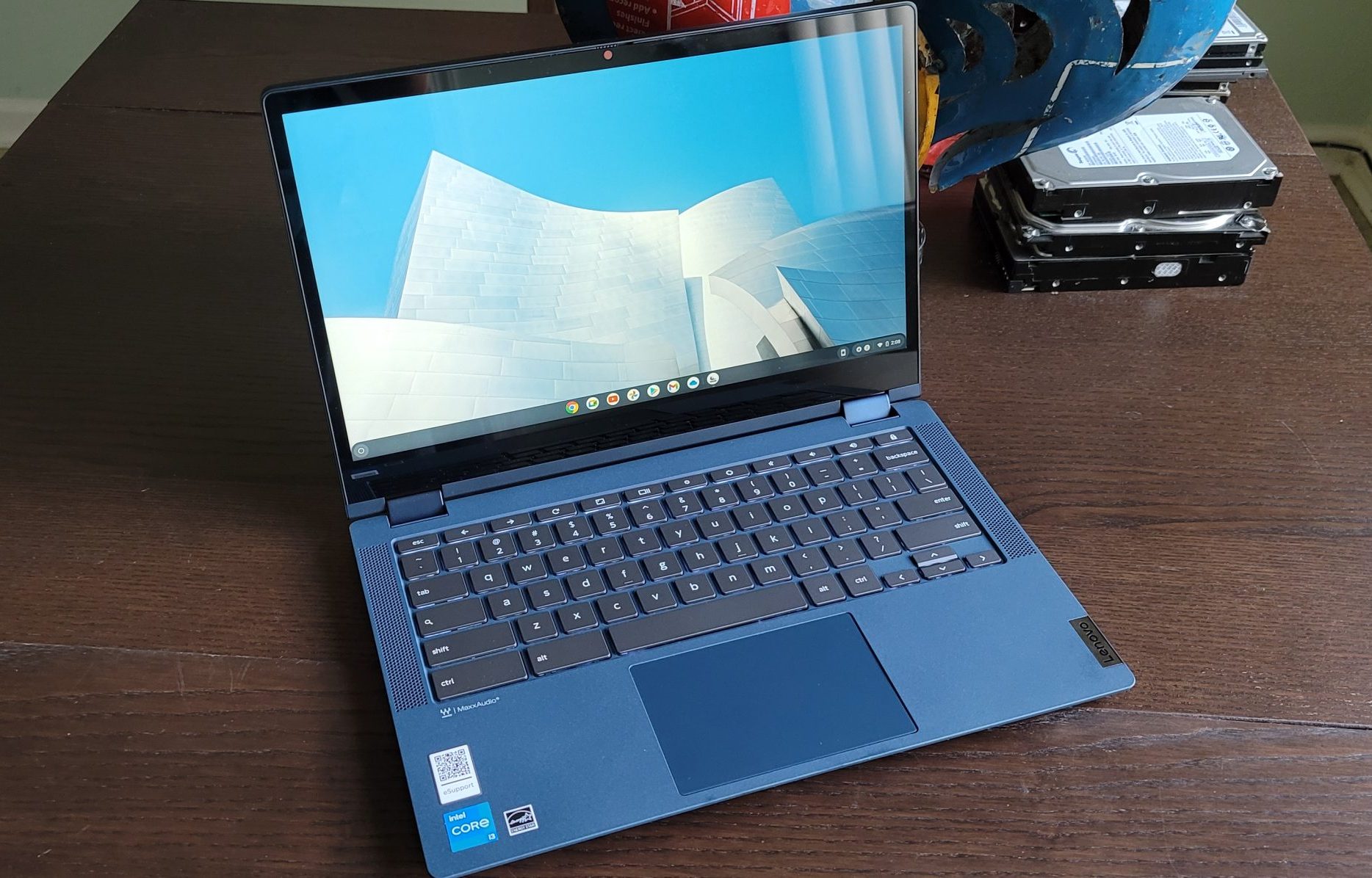 High-end specs available for a Chromebook

Specs are final - tough to upgrade

Chromebooks are new to our review lists here at TF. They’re laptops, but don’t really fall squarely into business or gaming. We’ll call these machines for the web enthusiast, and we’ve tested it accordingly. Our model is available at Costco right now for $549, with lower-specced models available at Lenovo as well.

Before we begin, the specs: We’ve used Chromebooks occasionally before and for the price these specs are definitely not bad at all. Chromebooks aren’t meant for gaming or engineering apps like some of the previous laptops we’ve taken for a run. They’re meant for flexible mobility that can can easily handle cloud-based productivity and stuff from the Google Play store. After using it some we quickly discovered this is more than just an average Chromebook.  While the processor is a quad core i3, the 11th gen chip runs at 3GHz, which makes it pretty snappy in combo with the 8GB of memory. 128GB for storage may be kind of small, but Chromebooks are meant to be operated with aa network connection from anywhere, so most of your storage is going to utilize cloud storage like Google Drive or Microsoft OneDrive. As its name suggests, the Flex 5 can be used in multiple form factors – you can use it as a standard laptop or turn the screen as much as you need with the 360 hinge for tent mode or as a multitouch ChromeOS tablet. Tent mode is great for watching movies and TV on the go, and being able to flip between tablet and laptop mode is convenient, especially when switching between work and play. It’s not too big either – with a 12.2″ x 8.42″ x 0.66″ footprint and weighing under 3 lbs, this 13.3″ machine travels easy. I even packed it in my kit together with an X1 Carbon Gen 8 and was still well on my way without adding too much weight or girth to it. This particular model comes in “Abyss Blue,” which we really enjoy. It’s a departure from the standard black laptop and has a nice shine to accent the chassis too. Opening it up gives us our 13.3″ screen with a 720 webcam with a privacy shutter on the top of the frame. Speakers flank the sides of the keyboard on the deck featuring Waves MaxxAudio. They’re 2W speakers so the sound isn’t earth shakingly loud, but they do still provide some impressive small-speaker sound to consume your media on the go.

On the left edge of the laptop is a USB-C 3.1 for display and power delivery, as well as a USB-A 3.1, mic/headphone jack, and a MicroSD card reader. On the left is power and the volume rocker, with another USB-C 3.1. There’s no stylus on this one for tablet mode, which some of Lenovo’s other 2-in-1’s include.

Most of our benchmarks and tests are for Windows-based systems, so we had to flex a little here. We don’t have the list of gaming and 3d tests to run on this one, so we decided to wing it. I set this up as my primary machine for the day and went on my way. As always, on wifi and 60% screen brightness. Productivity wasn’t really a big issue. Chromebooks have the Google productivity suite preloaded and accessing my information from Google drive was seamless. I myself prefer to work in the Microsoft environment so I ran the web-based versions of my Office apps by logging into Microsoft 365 and OneDrive, but also had the option to download them from the Play store since I had full access to the Android app library. I downloaded Outlook for local use, but everything else was in the cloud. There was no taxing on the 128GB of internal storage.

Specific business and enterprise programs like Microsoft Power BI desktop weren’t able to be used for design, but the Android version still allowed me to connect to my enterprise portal to see my dashboards.

Next was flipping it into tent mode to watch Black Widow from Disney+. The screen is only 250 nit so while the picture was still showing quite well, the screen could have been a touch brighter. But then again that would likely create a battery tradeoff, so it’s a design choice I can accept for longer life. It was easily able to be cast to my big screen through a Chromecast device too, if I was at home or bringing my Chromecast with me on my travels. Next up was games. While this isn’t going to be slamming frames per second from your Steam library, it’s still able to handily run all of your games from the Play Store. I started with Final Fantasy IV and moved onto Blizzard’s Hearthstone, and experienced precisely zero issues with performance or run speed. And the touch capability made the latter very easy and fun to play. You can also connect a controller via Bluetooth like you can with an Android mobile device. Finally, tablet mode. Flipping the screen over and using the Flex 5 as a multi-touch tablet allowed me to use it like I would any other tablet, and served as a good reader too. You can pick up the same reader apps you use for your Android device, so I was set with Kindle, Comixology and Moon Reader Pro for my non-branded ebooks. Colors looked great in comics (in this case Shekhar Kapur’s Devi) and standard book text was clear and easy to read. ChromeOS’s night light switch also made it much more comfortable to read in dim light and before bed by acting as a good blue light filter.

And after all was said and done, I was able to squeak out just beyond 9 hours. Lenovo advertises 10, but it’s extremely rare that I hit the advertised number in my real world testing.

Lenovo’s Flex 5 gives you more than the standard issue Chromebook. The specs and 2-in-1 functionality make this a great little machine for traveling and running your office from the cloud. Being an IT pro there are certain things I need that would prevent me from using this as my primary laptop, but my colleagues and I are special cases. For the vast majority of folks this will do everything they need it to. It travels well and has enough juice to get you more than the standard work day, and when that day is over can also work for games and other digital entertainment. For $549, this Chromebook ranks high for mid-range computing, and we think you get more than what you pay for.

October 25, 2021
Our Review Process
Latest Reviews
Where to?