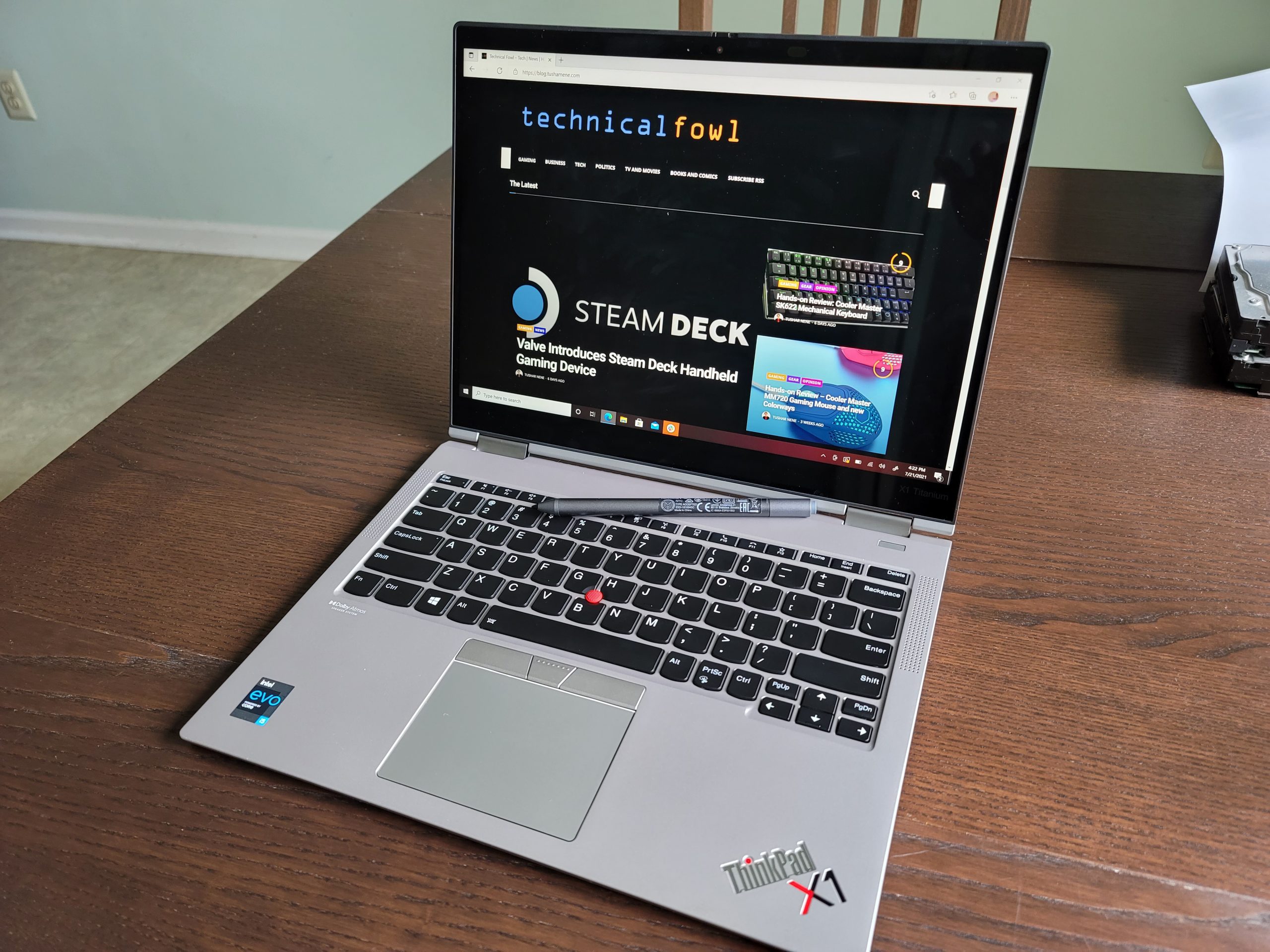 2-in-1 form factor with an accurate pen

We’ve been able to take a pretty detailed tour through Lenovo’s convertible, and we have another flexible one for you today with the X1 Yoga Titanium. Released in parallel with the X1 Yoga Gen 6 the Titanium has similar specs, but some different construction and changes on size and shape. Starting slightly higher with an opening price tag at $1,769, the system can be pushed up to top spec for $2,429. Here’s what we had to review, which would run you somewhere in between: For the most part the Titanium falls in line with the Gen 6 with the exception of the construction materials, thickness, screen aspect ratio, ports…

OK, it’s a different machine built for a different user. Sure the Yoga hinge is there, as is the touch screen, but there’s some pretty significant changes. For one is the size, at 13.5″ instead of the traditional 14. And as the name implies is the construction – a titanium/carbon/magnesium chassis makes this the sturdiest and most premium-feeling Yoga that Lenovo has in the line. It’s thinner and lighter than the Gen 6 too, at 0.45″ thick and weighing in at 2.45lbs. But it’s smaller so that makes sense. The 13.5″ size comes with a different aspect ratio. While Lenovo has been migrating their ThinkPads to 16:10 screens, the Titanium trims that down to a 3:2 screen with a very specific 2256 x 1504 UHD resolution at 450 nits. The Gen 6 can come with up to a 4K 500 nit screen, but the Titanium was clearly built to be even more portable than their already portable builds.

This gives the keyboard a bit more squish since the whole unit is a bit narrower, and it did take a minor learning curve to get used to finger placement on a smaller keyboard. They keyboard itself lives up to that of the ThinkPad line, with the same feeling keys and keycaps. Up top is a hybrid IR 720p camera with a privacy shutter and human presence detection, allowing the user to lock and unlock the system with a look when they’re near or far. Since it’s more business geared, we don’t have the soundbar hinge we do on home models, so the Dolby Atmos speakers are on the side of the keyboard. For what they’re made for the sound is pretty good – you’re not going to get booming bass hits but it’ll handle your video calls without issues.

For it to be this thin and light some things had to be sacrificed, and in the case of the Titanium that was ports. The right side features only the power button and a mic/headphone jack, On the left are two USB 4 Type-C / Thunderbolt for DisplayPort, data transfer and power. We imagine users of this particular model are traveling light with Bluetooth accessories, so this port shortage might not be a big deal. Still though, 2. To me it seems a bit light.

It’s a Yoga, so this can be flipped into tablet mode and has a stylus to use with it. The pen is the Lenovo Precision Pen, which is similar in feel to their Color E-Pen with 4,096 levels of detectable pressure. This one requires a AAAA battery for power though, instead of a USB-C connecter to recharge. With the larger pen and thinner laptop chassis, this pen sits outside on its own without in-chassis garaging. It makes for better performance and feel while writing, but without some sort of case or loop for the pen, I lost it – and I mean truly good and lost it. Took out the sofa cushions and did end up finding it but make sure you keep an eye on that thing!

The only real drawback we felt on this unit was the haptic response on the touchpad. It seems far less sensitive than other Lenovo laptops and doesn’t have that “clicky” feedback we see on outher touchpads. We talked about it a bit in the beginning of this post, but this is the sturdiest feeling model out of the Yoga line. While it’s still very thin and light, it still feels hard and well constructed. Much like the way Bilbo describes mithril to young Frodo before he sets out on his adventure really.

The Precision Pen lives up to its name when playing around in Whiteboard and OneNote. It was pretty good with not prompting the flyaway lines you can get with some stylus style entry devices. It picked up most of what I was doing without too many issues, and the button on the side provided an easy access mechanism for select and erase tools.

Like the Gen 6, the Titanium is on Intel’s Evo platform with Iris Xe integrated graphics so we were expecting similar performance. Here’s where we landed on the tests: 3DMark Time Spy: As expected with no dedicated GPU, this test came back with 1,175. This is a far leap from the average gaming laptop score of around 5,700, but it beat the average office laptop which doesn’t break 1,000.

Shadow of the Tomb Raider: We tried but weren’t able to break 30fps on this. Setting the graphics to “lowest” at 1280×720 resolution we got 24fps. In a pinch, maybe? Final Fantasy XV: At FHD (1920×1080) resolution the test came back as “insufficient” with a score of 1,910. Turning it down to “Lite” and tuning the resolution down to 1280×720 ran much more smoothly, without the model jumpiness we saw at FHD. Of course it’s not as pretty but came back as playable with a score of 3,096 – “Standard.” So it’s totally playable.

Overall the graphical performance was lower than the Gen 6. This was kind of expected, seeing that the Titanium is running an i5 and lower tier Iris Xe chip. As always, from 100% charge We started of with some media streaming, trying out Netflix’s Murder Among the Mormons. Sure, weird title, but we strangely enjoyed it. The whole series was three episodes at roughly 45 minutes each. After that unfortunately it was time for work. A full work day followed, mainly out of Microsoft Office and Power BI, slogging through queries and punching up docs with a couple hours of Zoom calls in between. Lenovo advertises 11.7 hours of battery life and we were able to get close to that hitting just about the 10 hour mark.

The ThinkPad X1 Titanium was built for sturdiness and travel. There’s a couple of sacrifices made like ports, a mild spec hit and a non-garaged pen. But it hits the mark for what it’s made for – super light at 2.5 lbs, sturdy against the errant bumps and scrapes, and sized to more easily fit into a travel bag. It’s got a slightly higher price tag and those higher specs will cost you though.

If you like the more squarish aspect ratio and are coming out of COVID to get back to routine traveling, this machine will work for you.

July 23, 2021
Our Review Process
Latest Reviews
Where to?