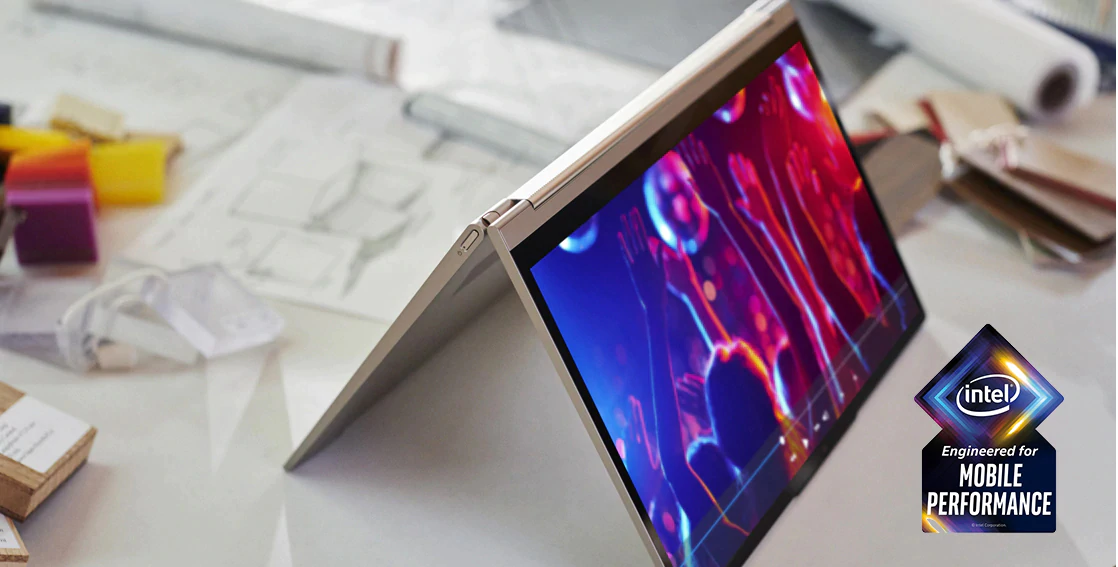 Could use more ports

Happy new year everyone! It’s time to return to the show for us here at Technical Fowl, and we are back after our post-holiday haze. Up next we take a look at Lenovo’s Yoga C940, their latest 2-in-1 convertible flagship in the Yoga line, packing Intel’s 10th generation technology. As always, before we begin, here are the specs of the review model:

The machine screams portability, weighing it at just over 3 lbs and measuring at 0.6″ thick. To me that’s still super light but for those that split hairs it is a touch heavier than its competitors (HP’s Spectre 360 13″ and Dell’s XPS 13 2-in-1 weigh in at 2.9lbs). The difference is that those are 13″ units while the Yoga C940 is a full inch bigger for screen size – and I personally am 100% OK with that tradeoff.

Opening it up brings us to a white LED backlit keyboard which is very responsive, as well as a nice large touchpad and fingerprint scanner for biometric logins. The bezels are nice and thin for the 14″ 4K screen, even with the webcam at the top of the frame with a True Block privacy shutter. A 360 hinge allows you to configure the C940 into laptop, tablet, or tent mode, and right next to it is where the Active Pen is cleverly hidden. When I was doing my initial tests I totally missed that it was there – it doesn’t protrude or affect the aesthetics in any way. It’s almost completely flush with the chassis.

Lenovo upped their game on this LCD, providing a VESA-certified DisplayHDR 400 4K (3840 x 2160) screen with 500 nits of brightness, a jump up from the ThinkBook line which shine at 300. And it is pretty. Cranking the brightness up to max and settling in with some UHD streaming on Netflix (if you pay the extra $3 per month for the plan that allows you to) is deliciously crisp and bright – a great feature when you’re on the road (or in your bedroom) and don’t have a desktop rig handy. The 360 hinge is itself a Dolby Atmos soundbar, which is a great accompaniment to the screen. There aren’t mega-booming bass hits which is expected, but the soundbar provides great audio range without any clipping in the high end, which we sometimes see with smaller traveler units. Setting this up in tent mode watching John Wick with the volume cranked up was perfect, and even in audio-heavy scenes like the Red Circle shootout, there’s still no audio clipping.

Moving over to the edges, there’s a bit of a drop in ports compared to other Lenovo lines, presumably for weight cutting and the mostly correct assumption that the user will have some things set up on bluetooth and wireless. The right edge is where the lonely power switch hangs out, while on the left we have 2 USB-C 3.1 Gen 2/ Thunderbolt ports that provide both power and DisplayPort functionality, a headphone/mic combo, and a USB-A 3.1 Gen 2 (or you know, a plain ol’ USB port, which is nice). The tiny 65W USB-C adapter can fast-charge this unit in about an hour, as well as any other USB-C devices you may have.

I feel like there’s room for a card reader in here without killing the weight of the machine though. With the display power in the 4K HDR screen, I feel like popping an SD card out of a camera and directly into my laptop would add convenience.

Also, you kids know me – I just might be the only person left who uses SD cards as portable storage. The only other thing that I would have liked was an RJ45 ethernet port. Understandably, those are relatively fat cables that wouldn’t fit into something this thin, and would take away from its portability. With the majority of people using mobile devices and WiFi these days, it’s probably moot for most.

I took this around as my work machine for a day – and for most meetings and site visits I was able to leave my computer bag at home. My normal work laptop is a 15″ Y700 gaming laptop at nearly 6 lbs and over 1.5″ thick, which requires a bag for it and the adapter. With the C940 I left the bag at home – this fit into my leather notebook without issue, and the battery life allowed me to not have to take a charger with me. At about half brightness and on WiFi I hit 2 sites for roughly 2 hours each, taking notes with the pen in tablet mode and easily fitting the unit in laptop mode in cramped server room space before coming home to continue. At that point I was still over 90% battery. From there cranking up the media settings and finding as much 4K content as I could, I tested out the media capabilities (results in the previous section) for about an hour while I enjoyed a sandwich and some coffee. Primarily working in Microsoft Office, Adobe Acrobat, and G Suite for the remainder of the work day, the battery was still not close to dying, so I closed the lid to continue later. After firing it up the next day I was able to work for another 4 hours and change before it finally gave out, giving me a total of about 12 hours and 30 minutes of multi-purpose time on battery alone. Lenovo claims a battery life of about 15 hours, but that’s on their base model. Upping the specs from an i5 and HD screen to an i7 and 4K is naturally going to hit battery life, but I was still very impressed at how much that hit was limited to.

The USB-C charger was able to get it back to full in about an hour, leaving very little downtime before picking it up again for another 12 hours. The other perk of having USB-C fast charge is that when the laptop wasn’t on it I could use it for my other devices – namely fast charging my Samsung Galaxy Note 9. It’s a convenience factor that keeps all of your stuff powered up and fast that I very much appreciated.

Like many of the non-Legion units from Lenovo I take for a test drive, we need to remember that this is not a gaming machine. It’s a pretty 4K screen but you’re not going to get 4K gaming without a dedicated GPU. The 10th gen i7 did let me do what I would call a decent amount of gaming on the C940 though. My two gaming clients on PC are Battle.net and Steam, so I went through the libraries to see what was what. Keeping the native 4K resolution made a lot of games stop and chug as was expected, but dropping to 1920×1080 FHD opened up some options. Most of Blizzard’s library was playable with ease – Diablo III and World of Warcraft were the ones I was a little worried about, but both were able to run. What helped with World of Warcraft was the 1TB SSD, making loading times nearly negligible, even with integrated graphics and crowded zones. Overwatch and Hearthstone provided no issues, and actually flipping over into tablet mode made Hearthstone easy to play. On Steam, dropping to 1920×1080 allowed me to play some older games like Command and Conquer: Red Alert 3 and Left 4 Dead 2. I was also able to play some more modern titles smoothly wih some of the settings turned down – the Life is Strange series ran without a hitch, and with some modifications I was even able to enjoy the frantic pace of Black Future ’88. Hell, I even broke 20 fps in certain parts of the Rise of the Tomb Raider in-game benchmark – not bad for no dedicated GPU. With some modifications? Playable.

And on a 14″ screen that high resolution doesn’t make nearly as much of a difference as it does, for say, the 27″ screens on my primary desktop. Intel’s integrated graphics do rely on the processor as well as its own specs, and the 10th gen i7 with Iris Plus was definitely an improvement over the 8th gen Intels with UHD 620/630 integrated graphics.

For someone on the go that’s not glued to their desktop, there’s definitely some options there.

Lenovo’s Yoga C940 4K is first and foremost a media machine. Streaming from your favorite subscription services and any kind of 4K content look and sound great with the added bonus of portability. My particular model is currently running for $1,463.99 over at Lenovo, but scaling down the memory, processor and screen brings the price down to just $999. Dropping to a 10th gen i5 and an FHD screen will up the battery life closer to the advertised 15 hour mark, and will still allow you to have a solid portable media machine with 2-in-1 functionality. It’s a great pickup for anyone who travels for business, consumes mass amounts of media, takes digital notes, doesn’t want multiple devices at home, and likes good value.

The final verdict? It’s slightly heavier and larger than its Dell and HP competitors and I would love to see a couple more ports, but the Yoga C940 4K does provide a larger 14″ screen with deeper and brighter color. As far as <15″ 2-in-1’s in the market, this one is an excellent choice.

January 5, 2020
Our Review Process
Latest Reviews
Where to?