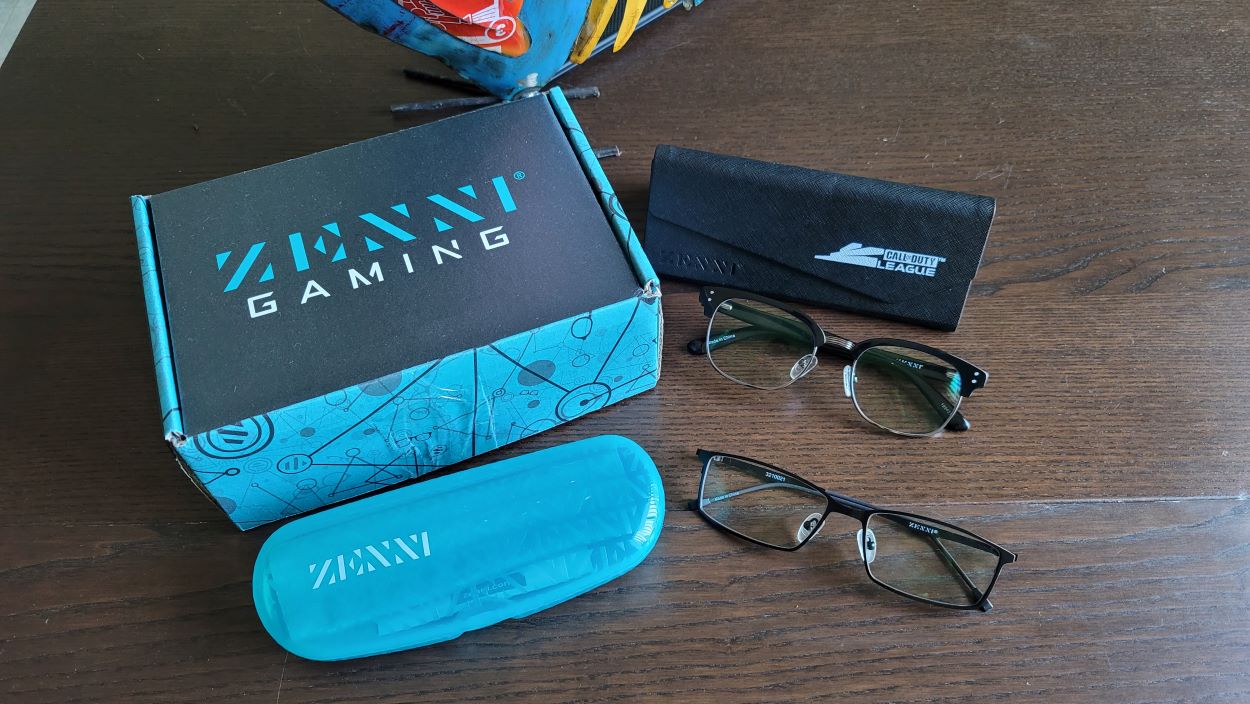 a SLEW of styles from traditional to modern available

After having our chat with Zenni about their BLOKZ blue light glasses at PAX East, we got to take them for a spin and see how they helped on a day to day basis. Like we said in our initial interview with them from the show floor, there are simply a ton of styles that you can choose to fit your BLOKZ lenses in with a number of different coating options. But we were interested mainly in blue light protection, so we went with the basic BLOKZ for our testing. I have what I would call a “high screen” type of lifestlye. I’m in IT and when I’m not working I’m likely gaming – so I opted to try out (as some do) wearing the glasses all the time to see what improvements I could notice and how they felt, instead of just during close up screen sessions.

Now we’ve used a number of different types of blue light glasses in the past, and the two hits we had to take with pretty much all of them were the yellow/amber tint and magnification we didn’t need. Sure, eyes need protection and it’s been proven that blue light blocking lenses work, but for artists or even IT folks or gamers that rack up the screen time and need/want to work in an untinted color space, we could do without that. Zenni’s “champagne” coloring was so mild that after just a short time with them on you couldn’t even tell there was a tint. And the magnification was so marginal that it allowed me to live a full-spectrum life, and made it much easier to wear them all day long around the house and the office without feeling like I was wearing something therapeutic. This may also make it easier for you to use your frames as a fashion statement, without the yellow tint prompting your friends and colleagues to ask you when you’re headed to the gun range, as Jenesee Grey of the Grey Area Podcast has often been asked in the past.

(She of course is far more fashionable than I, and prefers to live the shiny life)

So working them into your style is pretty easy. And at some of the super low price points, having multiple options doesn’t break the bank.

Now I’m lucky that my vision is still pretty good at 40, but you know, things getting fuzzy, eyes get strained, and particularly the occasional tension headaches are still things I have to deal with. Between being up close with a phone or tablet, at my desk with my 44” ultrawide, or on my couch watching TV or playing on my PS5, the number of screens I interact with on a day to day basis is a pretty vast variety. One of the problems I definitely notice is that slight fuzz around the letters on the Verizon FiOS guide on the television so I can see what’s on. After a day of allllll of these screens over a period of 10 hours or so, let’s face it, my eyes have been to war. Let’s not forget going to client sites when bright fluorescent lighting is all over the place too.

During the weeklong wear as time progressed I was able to feel all of the positive effects of what blue light blocking can do for you – less strain on my eyes meant those letters weren’t so fuzzy anymore, and that “halo” effect around the lights in the house started to go away. Less headaches, less eye strain and dry eyes, and most importantly the ability to sit and work or sit and play for longer were evident without negative side effects were all major pluses – let’s call them “quality of life enhancements.” Now, we talked about all of the styles available, but Zenni also has a new line in partnership with Call of Duty League. There are different styles for different teams, but the additional ones we had were specially designed for the fans instead of the players. Zenni chose this style of browline glasses because they noticed how popular of a style it was with gamers in general, so they decided to make this CDL-branded pair an attractive option for fans of Call of Duty League. For the team-branded styles – the newer styles were selected by the players from each team and allow fans a few more options to choose from when purchasing a pair in support of their CDL team. All of these frames are available with all of the options of their non-gaming BLOKZ pairs.

All in all, we think BLOKZ glasses from Zenni are a great buy, and provide a lot of value for the money. I mentioned in our PAX coverage, the simple style I preferred was under $40, and even with prescription and photochromic options, you can still get a fashionable pair for $100 or less. You can check Zenni out and pick some frames out for yourself at their official website.

July 8, 2022
Our Review Process
Latest Reviews
Where to?