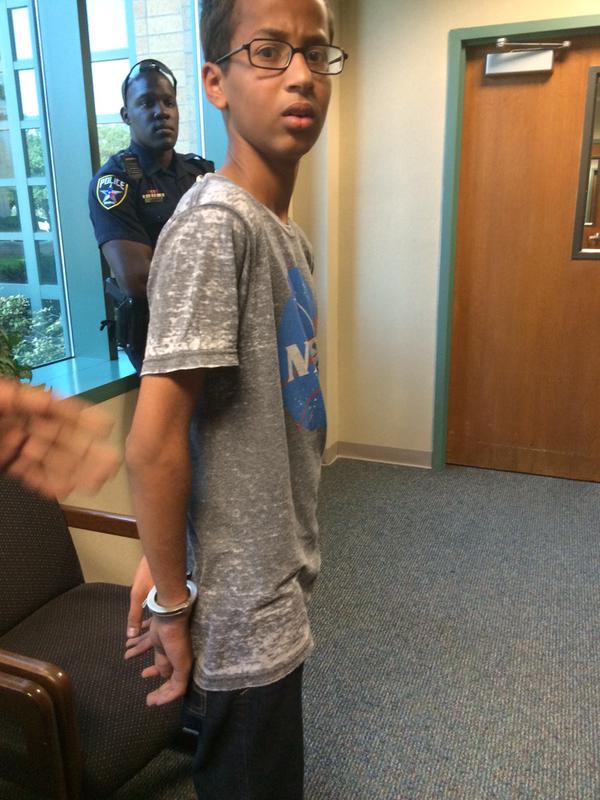 So I haven’t put anything up here in a good long while. Sorry kids, I’ve just been busy. You know, life and everything. So you can imagine it’s something fairly noteworthy that would make me pull out the keyboard and put some digital pen to paper without delay.

See late last night there was something I saw on my social feeds that took my mind through a number of degrees of pure fire. I only had the energy to pen a handful of tweets as a preliminary rant but this is something I still woke up mad about in the morning. A 14 year old student was arrested for bringing a homemade clock into school to impress his teachers.

OK. So on its face, regardless of any additional facts this is an absolutely ridiculous headline. Now let’s add some details – the student’s name is Ahmed Mohamed and the school district is Irving Independent School District in Irving, Texas.

Ahmed is a budding technologist and tinkerer and the clock in question is a basic circuit with 4 seven-segment displays – 2 for the hours and 2 for the minutes. Anyone that has even seen anything similar can tell you it is a pretty basic circuit that executes the simple function of counting. However when he showed the clock to his engineering teacher (his engineering teacher), Ahmed was advised not to show it to anyone else. When it beeped in English class, he took his invention to show his teacher afterwards. Her response? That it “it looks like a bomb.” The clock was confiscated and later he was pulled from class to a room where officers were waiting to interrogate and search him.

One even remarked “Yup. That’s who I thought it was.”

The officers weren’t there to tell him his clock was cool. they were there to accuse him of trying to build a bomb while the school threatened him with expulsion. Soon afterward he was escorted out of the school in handcuffs by police, taken to a juvenile detention center, fingerprinted and had mugshots taken.

Ahmed tinkers and creates a number of inventions at home, and was part of his school’s robotics club in middle school and was looking for ways to continue that interest as the high school year began. Watch his video interview below from the Dallas Morning News:

In the interview he states that he wasn’t able to talk to his parents until after the interrogation and they could collect him from the juvenile detention facility. “I went home and talked to my parents about it because I couldn’t call my parents during the interrogation,” he says before he explains his digital clock – you know, since this incident tells us that some people don’t know what digital clocks are, and every timed seven-segment display is wired like a “movie bomb.” He goes on to detail the demoralizing and dehumanizing process he then went through as authorities tried to trump up his basic tech project into an act of terror.

We’re living in an era now where young students across the country are being encouraged to pursue projects and knowledge in STEM fields (science, technology, engineering, math). And that’s exactly what this was. It was a kid with a lean for technology. And while it should have been fostered and encouraged, the elements of a stereotype attached to a name and a shade of skin color are what made this different. Lets’s be honest now – if this was about a stereotypical-looking American kid named Billy and not a brown kid named Ahmed, it would have been a gold star and a “way to go” instead of cuffs and fingerprints.

That’s right kids, Texas. Where you can arm your kids with assault rifles, but God forbid a brown student interested in technology conducts a technology project in a school district that brags about their “top digital district” award.

This isn’t the first case of educational authority criminalizing minority curiosity. A 16-year old Florida honor student was expelled in 2013 for an outdoor science experiment, and in addition to that arrested and charged by the Assistant State Attorney with possessing or discharging weapons or firearms at a school and possessing destructive devices. Both are felony counts where she would have been tried as an adult. The criminal charges were dismissed, but the felony arrest takes five years to clear from a record, according to her lawyer.

Curiosity should be for everyone, especially America’s young people. These are our future scientists and engineers that will push American ingenuity and technology forward. In addition to that, what Ahmed had to go through is the nightmare for brown people across the country. It’s incidents like this that erode the trust of American minorities in authority – harmless and innocuous events being picked up by people in power and puffed up to make it look like they’re fighting the good fight for the security of our country against the dangerous scourge that is a 14 year old kid. Congratulations Texas, you made him say this: “It made me feel like I wasn’t human. It made me feel like a criminal.”

No kid should have to shoulder that.

The engineering teacher should have been able to tell authorities that it was in fact just a clock and there was nothing nefarious about his project.

And to preemptively counter arguments on “well maybe it’s not about being brown,” let me stop you right there and explain something. Everyone that looks like Ahmed has gone through several incidents or experiences in the last 15 years that change how they see the world and the society, by making us very aware of our name, and the tone of our skin, and the immediate fear of that difference leading to ill consequence. How do I know? Because I’ve been there. Thank the universe that it was nothing as severe as what Ahmed had to go through this week, but these kind of events change a person, and I say that as an adult. I cannot imagine how it would possibly impact a child.

Here’s to me the worst part about it – how will this story affect other young minority makers, tinkerers, scientists and engineers in their comfort level and perceived ability to share and work on something with their teacher or the world without threat of consequence? the country’s nerd hearts must have simultaneously broke when they read “he’s vowed never to take another invention to school again.”

I wonder how me and my tech loving cohorts would have fared in life if teachers called cops whenever we had physics lab?

If this is a case of a prohibited item being brought into school then ok, I get it. But I get it proportionally. Punish him accordingly if that’s the case. Maybe detention maybe for not following the student handbook? 1 day suspension at worst? Definitely not suspicions and accusations of a bomb or hoax bomb.

See more of how people around the country stand with Ahmed with the twitter hashtag #IStandWithAhmed.

September 16, 2015
Our Review Process
Latest Reviews
Where to?