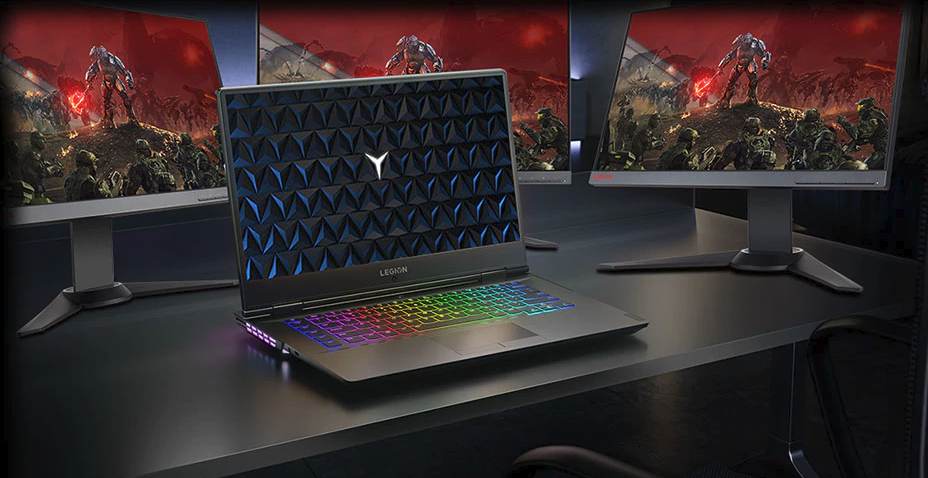 It’s time folks! The first quarter of 2019 has drawn to a close and after conventions with all the early-year game tech like CES and PAX East, we have some new toys to play with. Today we are getting back to Lenovo’s Legion line – the latest and greatest of their gaming suite, now built with nVidia’s RTX 20-series graphics cards. Lenovo’s new flagship laptop is the Y740, and we’ve got the 15″ version to take for a test drive.

As always, before we start, here are the specs of my demo model:

Both the 15″ and 17″ models of the Y740 are refreshes of last generation’s Y730 designs (check out the Legion Y730 17″ review here), which I don’t mind one bit. I multiclass from server rooms to my gaming chair, and I need to have one device that can do everything – not just by spec, but aesthetically as well. Two years since the Legion redesign and I still feel like an adult using it. Which is nice. Though the chassis looks the same as the previous generation with 180° screen tilt and ports in the back, there have been some marked improvements. The new 144MHz screens glow with 500 nits of brightness. The higher quality panel with Dolby Vision HDR and nVidia G-SYNC shows itself off not just during gaming sessions but when just jumping around apps in Windows as well. It really is a vast improvement in display, and even at FHD shows video flawlessly, with a 72% color gamut. Corsair iCUE RGB lighting still sits under the keyboard and under the chassis, which can be set to similar lighting patterns or turned off altogether. The ports are once again primarily in the back, and overall include: 2 USB 3.1 Gen 1, 1 USB 3.1 Gen 2, a mini DisplayPort, and HDMI 2.0, 1 USB-C / Thunderbolt (DisplayPort / data transfer), a 3.5mm mic/headphone jack, and a NOVO hole used to launch OneKey recovery.

The Y740 also comes equipped with Killer wireless, offering its own control panel in addition to Lenovo Vantage for fine tuning system performance.

I still really feel like I’m the only one who used SD cards. Am I? Oh well, I digress. There are a couple of things in this design refresh that I would have changed though. The first is the webcam – instead of being at the top of the frame, it’s dropped to under the screen. Unless you have the screen tilted up to get a angled shot of your face, what you can end up with is shots of your fingers typing on the keyboard. Aside from positioning, it picks up images pretty well.

The second thing that irked me a little bit was the keyboard. In the Y740, the left hand side of the keyboard is reserved for Lenovo functions, LED brightness control and 2 programmable “M” keys. While this on its own is nice, it shifts the entire keyboard off-center to the right. On most laptops, including past Legions, the keyboard is centered in the chassis, lining up center with the screen. It took a bit of a learning curve before everything I typed wasn’t one key off and I wasn’t accidentally hitting caps lock all the time while I was working the WASD. Those small points aside, the build quality is nice and strong, and I can feel the quality in the build that I have come to expect from Lenovo.

Under the hood is where the real changes are. The Y740 may use the same 8th generation Intel i7-8750H 6-core processor as its predecessor, but the video card I’m running this test drive with is an NVIDIA RTX 2070 8GB Max-Q, a card which blows the previous generation’s GTX 1050 Ti out of the water. The 17″ model can be equipped with the RTX 2080 Max-Q, with both cards providing ray tracing support in all its glory.

We’ll get to that shortly, but just for the sake of comparison here’s some FPS numbers from the previous-gen Legion Y730 and Legion Y740 in Rise of the Tomb Raider on high so you can get an idea of the difference in graphical power:

It may be a bit of a dated game, but it is still graphically fairly intensive that needs top-end cards to fully enjoy. Running the same bench with the graphics turned all the way up in every category still got us 70 fps, which is damn impressive. To modernize we also ran some tests with Shadow of the Tomb Raider, one of the few games that takes advantage of the ray tracing capabilities of the RTX 2070 Max-Q. You can see the results of those below in the game testing.

Like I mentioned above, Rise of the Tomb Raider is generally the game I’ve been using to test graphics capability. But a new generation calls for a new Lara Croft, and this will be the first laptop to be tested with the newer Shadow of the Tomb Raider. Unlike the previous game though, Shadow only reports one aggregate average FPS score, but that’s still good enough to give us an idea of what we can do. We tested the game on high and very high settings, in both cases using DirectX 12 and various levels of anti-aliasing. Here’s how the Y740 fared: The RTX 2070 Max-Q held its own for sure on the built in benchmark tests. Running the game on high settings is visually beautiful even without the RTX DLSS or ray traced shadows on. With all of the NVIDIA bells and whistles active, some points of the game are photo or near-photo quality, but of course as you see from the results come with a cost to your frames per second.

Turning on the ray traced shadows replaces shadow maps with spot and directional lights like the sun, with the addition of translucent shadows. There are going to be a lot of fast action games that ray tracing isn’t going to make a huge impact on like FPS games, but with games like Shadow of the Tomb Raider which has loads of outdoor vistas and slow paced forest scenes where the sun is bounced off of every leaf of a tree, it looks pretty good.

Take a look at the image here – the top is with regular shadows and the bottom is ray traced. Notice the shadows and sun spots on the ground in the top photo kind of look like splotches without gradient or form.

The bottom image, with the help of ray tracing, shows light and shadow on the ground in translucent forms – that is to say there are degrees of softness in the diffused light penetrating down to the ground. The biggest evidence is the lower left corner, where the diffused light shows in the exact shape of the foliage blocking the sun, instead of a hard-edged splotch. Click the image to see the comparison full size so you can really see the difference.

So sure, it almost halves the frames per second with ray traced shadows up on ultra settings. but the RTX 2070 Max-Q inside this thing can really cook. And while things cook, it’s easy to let heat become a problem on a lot of machines. The Y740 does get a little warm when stressed, but it could be way worse. Lenovo’s Coldfront cooling system has been redesigned to handle the load with 4 thermal vents and individual GPU and CPU heat sinks to keep your lap and keyboard a bit cooler. I was able to game without sweating from the heat generation I’ve felt from other laptops. Coming off of a full charge in the morning I made the Y740 my business machine for the day. Usually this isn’t super heavy and this day was no different. Mostly web browsing and some work in Microsoft Office ruled my time, but it seemed to drain the battery a little quicker than I’m used to with other gaming laptops. Taking a couple breaks to watch some YouTube clips and a little Game of Thrones before the upcoming final season premiere, within a couple hours I was facing a shrinking battery icon on my Windows taskbar.

I switched from better performance mode to better battery mode halfway through (better, not best for both counts). Keyboard lighting was turned off and the screen brightness at about half since I didn’t need all those nits all the time. The exception was turning the brightness up to max while streaming videos. By default Windows kicked battery saver mode into gear when it got low. Final battery time? 2 hours, 41 minutes.

So here’s a laptop that is nice and thin, can be tuned for gaming or work at will, still has an RJ45, and a lot of the ports that I need. I can push max game settings with ray tracing if I need to, or just turn things down to work. It satisfies my need for multiclassing, but how does it stack up to previous generations?

My model gave me the power of an RTX 2070 Max-Q and a fantastic display, and that model retails at $1,919 (currently on sale right now at Lenovo for $1,677.99). There are lower end models available that run RTX 2060 cards with different hard drive configurations starting at $1,679 for a (currently $1,461.99) as well if you want to save a couple of bucks. The difference? It drops the storage to only a 256GB SSD, and the card down to an RTX 2060 6GB. In my opinion, if you’re buying this machine, it makes sense to max it out with the 8GB video card and extra storage for all those games.

This is a super powerful machine when plugged in, but to me the biggest detractor from the Y740 is the “everyday” battery life. I got under 3 hours on my test drive, while the previous generation of Legion machines got me closer to the 5 hour mark. You’ll have to make sure you are carrying the 230W adapter with you to make sure you still have juice if you’re traveling and in a jam. Thankfully Lenovo has made the adapter as slim and small as it can be so it’s not a behemoth to carry around.

Final verdict on the Y740 15″? Like Lenovo says, the Legion Y740 was engineered to deliver near-perfect gaming immersion, and lives up to that. It’s a strong buy for RTX power with ray tracing that you will still have to carry an adapter around for most of the time.

April 9, 2019
Our Review Process
Latest Reviews
Where to?