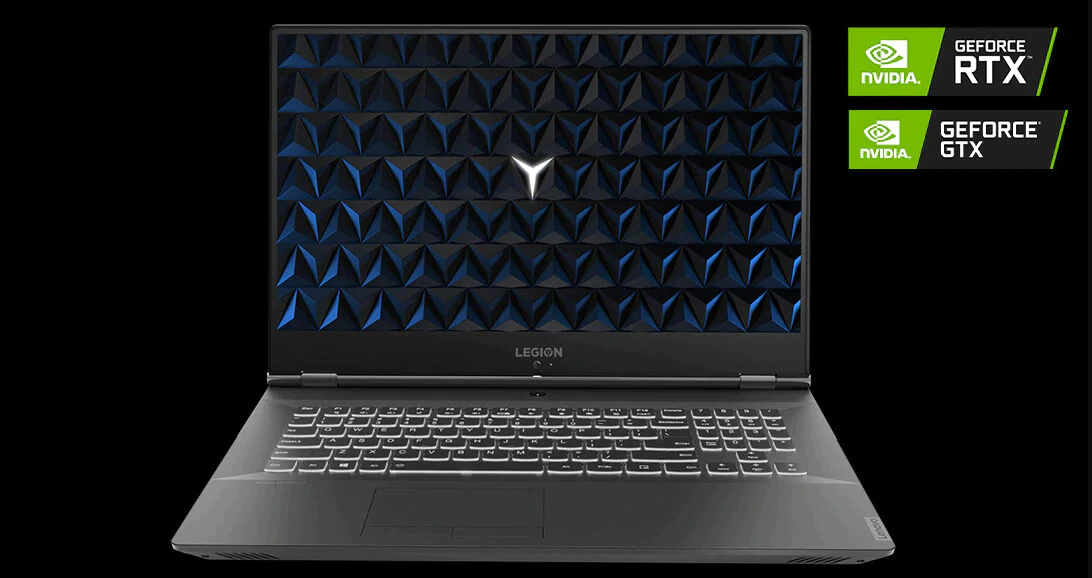 Thermal management - gets warm but not lap scorching under heavy load

Embargo has come and gone so we’re allowed to tell you that Lenovo is ramping up to push a bunch of new stuff in their Legion line – but that doesn’t mean their outgoing generation models don’t still have the chops to game like a champ. Today we’re taking a look at Lenovo’s Legion Y540 17″ gaming laptop, which right now can get you in gaming shape with 9th gen Intel and NVIDIA power starting at $999. Before we begin our tests, as always here are the specs of my review model: OK I’m going to get this out of the way first – I am not a fan of the textured lid. The design is cool – with a white LED illuminating the “O” in LEGION in a subtle way, but the texture makes me batty. Mind you this is not going to be the same for everyone that picks one of these up but when my fingers or nails run across this lid accidentally my body tenses up in a “nails on the chalkboard” situation and it is a huge turn off. I got that out of the way first because once the laptop is open, there aren’t any more physical issues that I experienced. A 17″ laptop sounds huge these days but to me? Not really. I’m from ye olde school. My multi-purpose laptop for a long time has been a 15″ Lenovo IdeaPad Y700 (the precursor to the Legion line) and let me tell you, bezels make a difference. With the same footprint as my old Y700, these thin bezels surrounding the screen allow for 17.3 inches of screen where only 15.6″ used to be available just a couple of generations ago. That’s not to say the Y540 isn’t a big boy though – the weight on these starts at 6.26 lbs. That may be a bit bulky, but for a 17″ gaming laptop that’s pretty in line. Similarly sized Alienware models come in at just under 6 lbs, while HP’s OMENs weigh in at nearly 6.5. MSI’s can break the 7 lb mark.

Like the newer Legions, that 17.3″ screen folds back flat 180 degrees. With the bezels being near non-existent on three sides, the bottom is left as the only spot to house the webcam (with physical security cover). This doesn’t usually cause a problem but my preference is for the camera to be at the top of the frame so folks I’m on a call with aren’t slightly looking up at me from below. The screen though, is a delight. While previous iterations of Legions could have used more brightness, this 300 nit IPS panel can go quite bright when cranked to the max. As we move south of the screen we get a full sized keyboard with numpad. This keyboard reminds me of some of the ThinkPads I work with on my business side, and felt familiar and easy to type on with good feel and response time (<1ms). The keys are wide with a lot of surface area and make typing pretty easy and provide the accuracy some folks get out of dedicated keyboards with mechanical switches. Flicking a shortcut key also gives the keyboard a subtle white LED glow that gives it a bit of flair. It’s a great detail that lets this machine be used for work or play – I know walking into the boardroom and having an RGB light show pop up when you open the lid might get you some looks.

With the exception of a USB port on each side, the majority of the ports are on the back of the laptop, meaning I don’t have to worry about what side I need to have the laptop on to pipe to a display or plug into anything else. That said there’s a good array of ports for you to use: 3 x USB 3.1, 1 x USB-C, 1 x Mini DisplayPort 1.4, 1 x HDMI 2.0, and an RJ45 port for ethernet. One of the reasons to love the 17″ versions of laptops – there is usually not a shortage of ports. One of the bright spots here is the USB-C port, which isn’t available on some of the 15″ models. It also includes a NOVO hole in case you need to pull a hard reset on the system.

So a note on this before we begin. This is a 17″ gaming laptop with a 9th gen i7, RTX 2060 6GB card and a 144Hz IPS display panel. This thing is going to churn, and we didn’t expect a huge amount of battery life from it. That’s not a knock, it’s just how things go with gaming laptops. So I set up and started using it for my day to day stuff. First thing was trying to put it into my computer bag for travel. The laptop itself fit fine into the sleeve of my Timbuk2, but the adapter is a bit on the large side. For this thing to run off of AC power it requires a 230W power supply, which is tough to make small. They tried to make it as flat as possible but it still is a bit bulky when considering travel. Off of AC power and on battery I did some pretty routine things. With the screen brightness at 60% and power settings to “better performance,” I worked on some business in Microsoft Office, browsed some in Chrome, watched some videos on YouTube and Netflix, and edited this very article in WordPress. I stopped everything for a bit to get caught up on the latest Westworld, but for the most part I wasn’t doing anything too nuts. I got about 4.5 hours of time before it finally clicked off and went to sleep.

While I was working I was using the machine on my lap, and one thing I noticed is that while it did get warm, it was never hot enough to have to set aside for a minute to cool down. Lenovo’s Cold Front cooling system has dedicated cooling channels for both the CPU and GPU, keeping things on the cool side without too much noise. Shadow of the Tomb Raider is still a pretty demanding game, even on modern cards, so it still seems like a great game to test out the RTX 2060 that this unit is packing. With the settings at high , the built-in bench threw up an average FPS of 85. In comparison, we didn’t run a review here at TF for the 15 inch version of the 540, but we did run the y545 through its paces with the same specs and a GTX 1660Ti. That system pulled an average FPS of 78 during the SotTR bench, so there is a slight improvement. When we boost it to turn ray traced shadows on high, the average FPS dropped down to 51. Granted that may seem like a huge drop but animation and play was still very smooth without tearing, and though we got less frames per second, the ray-traced shadows did provide a noticeable difference in quality. MMO mainstay World of Warcraft was next – with settings pumped all the way up we were looking at anywhere between 45 and 60 frames per second in large cities and hubs like Boralus. As we moved further away with less going on (for example, taking a flight up to Stormsong Valley), the frame rate jumped up to 99+ for the most part, and in some less dense areas jumping to 102 and 103. Not bad and I didn’t experience any issues with choppiness or screen tearing during my time in Azeroth.

We tried boosting a bit with the built in Vantage software, but CPU/GPU overclock isn’t available on this model. Vantage does provide options for hybrid mode and network boost so streamers can prioritize network connections for games while doing other things, but as I’m not one of the beautiful streaming people I didn’t really have much to test this with. All I can say is that this system ran everything I needed it to and did it full out.

The Legion Y540 17″ might not be the latest Lenovo is putting out for 2020, but it is still packed with the specs gamers need to handle their business. Being able to be customized from an 9th gen i5 / GTX 1650 up to an 9th gen i7 / RTX 2060 gives users a good price range to have a good gaming build that fits their budget starting at $999. Of course with the lower end specs you’re going to get a bit more battery life out of this unit but being a gaming machine, battery life is kind of a secondary stat that you’re not going to be putting many skill points into. If you’re looking for a gaming rig that gets it done this is a solid machine to do it, however it’s not going to serve you very well if you’re trying to have one machine do both work and play requiring a lot of time not plugged into the wall. On the other hand, the simple black design does allow this to be an office machine without drawing too much “look everyone I game” attention and can blend in very well with its subtle lighting touches, especially when you need that desktop real estate.

Final Verdict on the Y540 17″? A solid customizable gaming laptop – you’ll get out of it what you put into it.

April 20, 2020
Our Review Process
Latest Reviews
Where to?