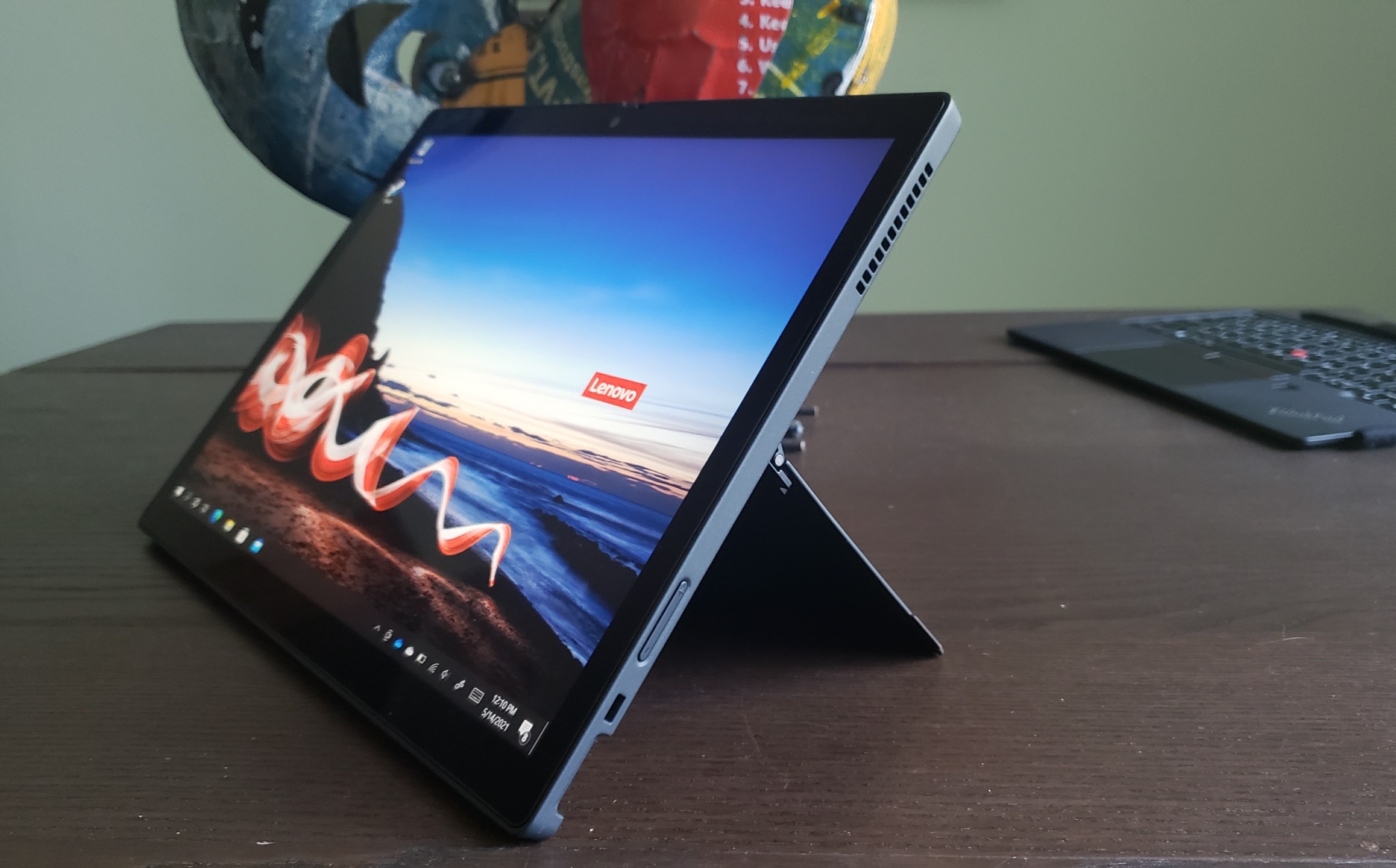 Detachable keyboard and digital pen in the box

Small keyboard does have a learning curve

We feel like there should be a 4K option

A short while back we took a look at one of Lenovo’s Surface-style rivals in the Duet 7 – a machine that was made primarily for home and enthusiast users. Today we have the more business-oriented ThinkPad X12 Detachable starting just over $1k at $1,097 at Lenovo. It can be specced up to $1,649. This one also runs on Intel’s newer 11th gen processors and Iris Xe integrated graphics, making it an instant upgrade from the Duet 7 and a head-to-head competitor to the Microsoft Surface Pro. Before we begin, here are the specs of our review model, which is just about middle of the road in that lineup: Like we said at the top, the X12 Detachable is another one of Lenovo’s “Surface style” tablet PC’s with a kickstand and detachable keyboard. The tablet itself is 9mm in depth and weighs in at just over 2.4lbs. It may sound a bit on the heavy side, and it is for a tablet, but a lot of that is the very sturdy magnesium chassis instead of plastic and full PC specs inside. At the top of the frame (in landscape) we have a 5MP camera with a privacy shutter, as well as an 8MP world-facing camera in the back for taking photos and videos. The FHD screen (1920×1080) actually does have some glossiness to it to enhance videos and streaming unlike some other traditional ThinkPads, and is brighter as well at 400 nits. With sturdiness in mind, it’s constructed with Corning Gorilla Glass for added durability, and decently thin bezels that leave you good screen real estate. The power button sits on the top of the frame on the right. The detachable folio keyboard itself is pleasantly sturdy, and feels like you’re typing on a “real” laptop. It has a hard bottom instead of the cloth-like finishes we see a lot on this type of form factor. It has a fingerprint scanner as well as a loop to hold the Lenovo Digital Pen so it doesn’t get lost. The battery-operated pen itself has the size and weight of ink pens, so it feels pretty natural to write with. I’m glad the loop is on the keyboard because without it a pen of this size is impossible to garage, and I would definitely lose it on my own. Even though the X12 Detachable is running Intel’s 11th gen chips (up to an i7) it’s not on Intel’s Evo platform, which does take a little bit away when it comes to battery testing, but not so much that I couldn’t get a full day out of it (you can see details below). And since it’s more oriented to the mobile business user, in addition to biometrics on the keyboard it features the discrete Trusted Platform Module (dTPM) for encryption and security. One of the downsides is that we are a bit low on ports – there is one USB Type-C Gen 2, and a second Type-C Thunderbolt for DisplayPort and power. Granted if this is your traveler you are likely running Bluetooth and wifi everything, but I like having some additional port options without having to be stationary on a Thunderbolt dock.

Outside of USB is the nano SIM slot if you choose to live the true mobile life with the optional 4G WWAN card. Before we get into the performance benchmarks we started doodling around in OneNote and Whiteboard with the Lenovo Digital Pen. It feels good to write with but I did have some issues with it – the fact that it is perfectly round as opposed to ridged or flat made it easy for the pen to turn in my hand, and I’d accidentally hit one of the buttons undoing the writing I had just done. It still writes without flyaways or streaking, but I’m still a bigger fan of the hexagonal E-Color Pen that came with the Duet 7.

The unit can be lappable with the kickstand out but as expected that was still a bit uneasy, and if I was on the couch and not at a table I ended up using it in tablet mode with the pen. This still let me do my office work, spreadsheets and notetaking without taking away from the experience. If I did need full typing capability the  backlit keyboard still had the ThinkPad feel, but there was a bit of a learning curve for size.

My final feeling was that this is a solid contender to Microsoft’s Surface Pro on specs, performance and feel, with the X12 having double the storage space of a similarly specced Surface. The other bonuses are in my opinion a better keyboard than the Surface type cover, and the sturdy ThinkPad construction we’ve come to expect from Lenovo. From these benchmarks we see the difference in grades of Iris Xe integrated graphics. This unit is running the G7 80EU version, which is slightly lower powered than the G7 96EU in the other Lenovo Iris Xe units we’ve reviewed like the L13 Yoga and X1 Yoga Gen 6 (review coming soon). This explains the lower scores in 3DMark, as well as the Content Creation score bottleneck in PCMark 10. As always, the goal with integrated graphics on our Shadow of the Tomb Raider benchmark is simply “will it run?” In this case it did – after tuning the settings to “lowest” and bringing the resolution down to 1280×720 we were able to get an average 26 fps. This game kind of needs to run at 30+ to play clean, but it is, we’ll say, mildly playable.

The surprise was the Final Fantasy XV benchmark, which looked clean in “lite” mode without too many skips or stutters, even during battle and summon scenes. With tuned down graphics, even in FHD, I’ll call this playable, even though it came back with “Low.”

As always I made it my daily driver to see what I could do with it, starting with a full charge, battery mode in “better battery” and the screen brightness at 60%. Starting with some media, I got in the first couple of episodes of Netflix’s Jupiter’s Legacy which both looked and sounded good. From that I picked it up to do some work in Salesforce and Power BI. Next up was doc writing and a few remote sessions and tinkering with virtual servers on VMWare. It was great being able to do that in tablet mode while walking around, and there was really no loss in functionality while doing things through the GUI. I did need the keyboard attached to run some scripts in the command line interface, but I was still able to get it done. From work to personal was many many tabs of browsing including email, YouTube, and window shopping for cars (it’s fun, really) and looking through a few sales on the couch while watching TV. The X12 finally tapped out at just under 7.5 hours, but I was also able to charge it back up to 75% in under an hour using Lenovo’s rapid charging.

The X12 doesn’t run on Intel’s Evo platform so even though we’re not looking at the guaranteed 9+ hours of runtime on battery, I was still able to get about a full day’s work and play on this one, which still isn’t bad. I would imagine the i7 would have yielded a bit less on-battery use.

Lenovo’s ThinkPad X12 tablet is definitely an upgrade from the Duet 7, with higher business-tuned specs and dTPM security that make it easy to go from work from home to working in an IT room to working from anywhere that has a solid wifi connection. The model we were using was the i5, and I’m not sure that for the type of use this is targeted for that the higher-end i7’s are really required to get it done, which makes me glad that i5 models are available with 16GB memory. It starts at $1,097, with this particular model going for $1,397. An i5 with 16GB memory on a Microsoft Surface Pro 7 runs $1,399 and that only comes with a 256GB SSD.

For the business traveler that values small dimensions and easy tablet use in their downtime, this is definitely a good pickup, and a real option for those looking for a Surface alternative.