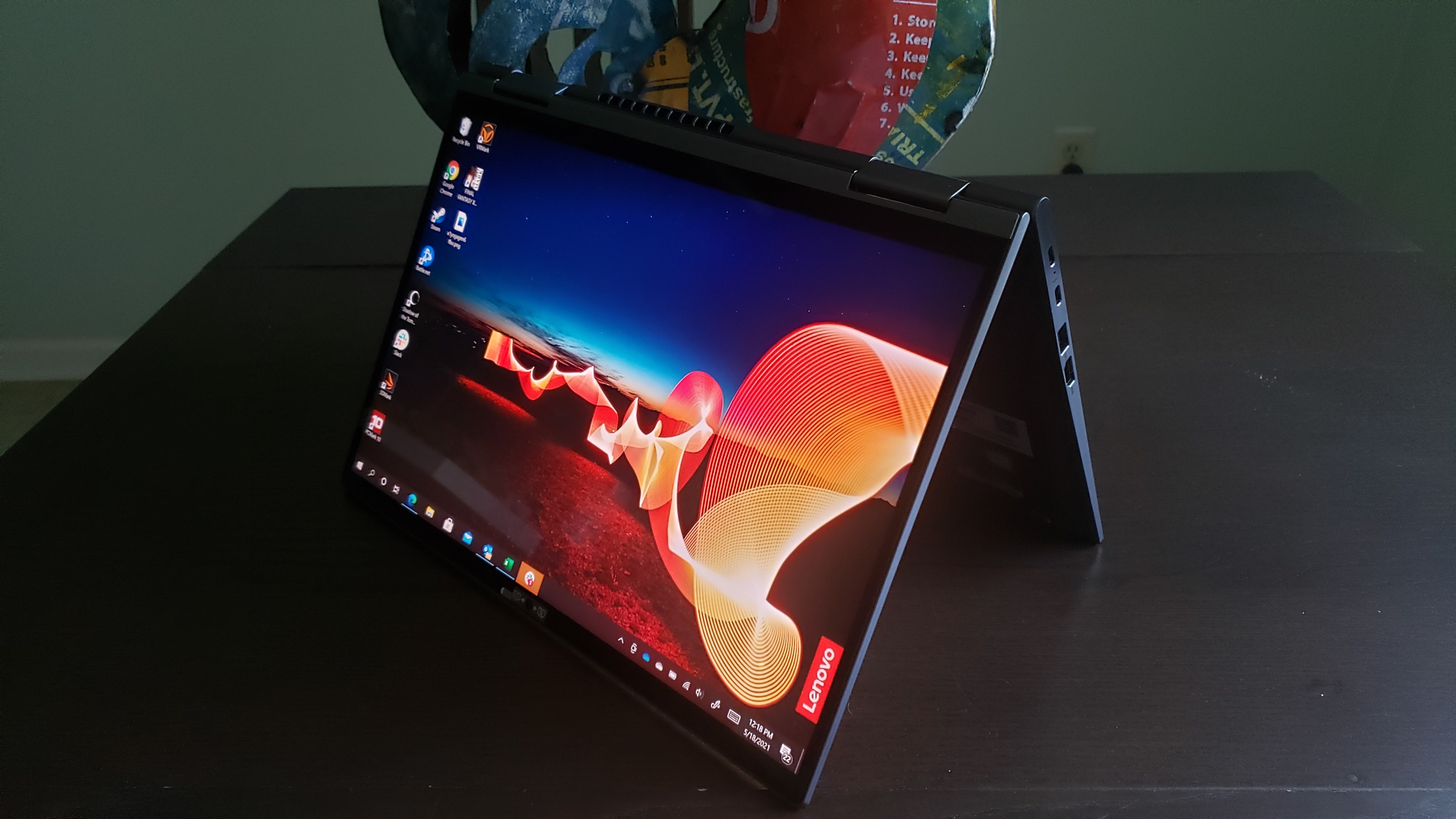 WWAN options for both 4G and 5G

Iris Xe good, but a little bit shaky versus other systems on Evo platform

We have… well we have reviewed pretty much every Lenovo home and business convertible in every form factor they come in this year. Today is the last of the batch – the X1 Yoga Gen 6. With a 360 degree hinge like its other Yoga namesakes, a garaged pen and on Intel’s Evo platform, this is probably also our favorite one out of the bunch. Right now they’re starting at about $1,500 at Lenovo, but can be configured with the top end specs up to $2,375. The version we were working with is pretty close to that top end model, and here’s what it comes with: Based on the systems we have been looking at, 3 lbs might sound like a monster, and the X1 Yoga kind of is just that. Being a foldover style convertible, it’s got the heft to be able to provide PC-grade specs as well as the thickness to house a garaged pen within the body of the laptop. All of this is encased in a smooth and solid aluminum chassis, giving it a much higher degree of durability than most other convertibles. Following suit with other modern ThinkPads, they’ve also converted the form factor from 16:9 to 16:10 from previous generations, offering a bit more real estate on that screen. With the low end model coming with the default FHD+ (1920×1200) IPS panel, this extra space is a bit more pronounced with the 4K option. Ours had a beautiful 500 nit 4K UHD+ (3840×2400) IPS multitouch screen, shining the brightest out of all of the Lenovo ThinkPad line. We were eager to see how the beefed-up screen would affect the Evo-powered battery life, and though we’ll get into detail below, we’re happy to say we got more than a full day out of it. Aimed at the business power user, the security measures were upped a bit from other ThinkPad models, integrating the fingerprint scanner into the power button, and human presence detection that locks when you set it down or walk away, and provides zero-touch login when you get close again, even if it’s in sleep mode. To be honest, it was a weird combination of cool and creepy whenever I came back to the idle machine and it popped right up to the Windows screen, but I’m alright with that. Of course if looking for camera privacy the shutter switch is right at the top of the frame.

See I’m nice to computers and I hope our future digital overlords appreciate that I even thank auto-checkout machines at the store when I get my groceries. So as Lenovo amps this up generation over generation as time progresses, I’ll be alright. The additional size and weight of the Gen 6 gives us some extra ports to work with, so we don’t need a dock or port replicator to get some use out of it. On the left are two USB-C / Thunderbolt 4 ports (one of them for power), a USB-A 3.2 Gen 1, and an HDMI 2.0 port. On the right is another USB-A 3.2 Gen 1 (always-on), the garaged pen, headphone/mic jack and a Kensington lock slot.

And if you want to live truly mobile, there are options for WWAN. The big plus with this unit is that the options list has more than one entry. The Quectel EM120R-GL is available for 4G, and where available you can even equip it with 5G using Qualcomm’s Snapdragon X55.

You can feel the durability and quality in the build of the Gen 6, and though that makes it slightly heavier I will take that over a plastic chassis any day. The garaged pen is of course slimmer than the digital or e-color pens but that doesn’t mean they’re tougher to write with. I was able to sketch and write with the same ease and without flyaways or errant streaks in tablet mode. As we mentioned a little ways up the screen is the best we’ve seen out of the ThinkPads. At 500 nits it’s at least 25% brighter than most of them, and plays 4K video content flawlessly with great color representation. And even when streaming at full brightness or doing anything taxing on the system’s resources, the dual fans and rear air vents keep it relatively cool.

The Gen 6 is on the Evo platform and uses Intel’s Iris Xe integrated graphics, which in our experience so far has been a decent leap over the previous generation’s integrated UHD graphics. It lets business users multitask with any office or enterprise applications while simultaneously working on those video calls we’ve all come to love and hate.

It felt good to use in any of the convertible form factors, and is overall an extremely versatile machine. Now let’s get to the tests:

3DMark Time Spy: As expected with no dedicated GPU, this test came back with 1,265. This is a far leap from the average gaming laptop score of around 5,700 Shadow of the Tomb Raider: This one was a bit of a surprise – with the i7 we expected this to do far better than the X12 Detachable we took a look at, but that wasn’t entirely the case. We still broke 30 fps hitting an average of 33, but that required us to tune everything to “lowest” at 1280×800 resolution. Still playable though!

Final Fantasy XV: This one gave us a bit of trouble. Running the benchmark on “Lite” settings at FHD ran kind of ok, but the textures were bouncing around the screen a bit while it was going. The results came back with “slightly low,” meaning technically it is playable if you turn everything down all the way.

Outside of these benchmarks we were able to play World of Warcraft on graphics level 3 at 1440×900, and Diablo III had absolutely no issues running at 1440×900 on high settings.

For a business machine, the Gen 6 did pretty well on our benchmarks with integrated graphics.

We had big expectations from this one since it’s on the Evo platform, but also had some concerns on how the battery would be affected using a 500 nit 4K UHD+ panel. Brightness at 60%, battery mode on “better battery” and with the wifi on we began. Having been somehow deep into true crime documentaries lately, we started streaming with a couple episodes of Netflix’s This is a Robbery. Following that up with a couple hours of work we were still at 77%. A full day of documents, YouTube, SQL queries, Salesforce, and work apps later and there was still some gas in the tank. I flipped it over from laptop into tablet mode to browse the web and shop while watching tv and made some notes in OneNote, and before I went to sleep it still wasn’t done. I couldn’t drain it to zero until the next morning while taming Excel spreadsheets like a ringmaster. The final number? 12 hours.

This is lower than the Lenovo advertised 16.1 hours, but we’re always going to see hits to advertised battery numbers as the specs increase, specifically the graphics and video. Our model jumped from FHD+ to 4K UHD+ at 500 nits, so we fully expected that we’d have a bit of reduction.

But the Gen 6 also has rapid charge, so when the 12 hours is up and you’re in need of juice, you should be able to get back up to full charge in about an hour.

The build of this machine is fantastic. Sleek and sturdy aluminum chassis in “storm grey” really makes it stand out from the rest of the ThinkPad line in black, and it has the additional ports I need to work as opposed to some of the more super-slim models. With these thin notebooks one port might always be used with an adapter for an RJ45, so the additional ones let the Gen 6 be used effectively mobile without having to plug it into a dock for full function. Add the beautiful 4K UHD+ screen and long battery life on the Intel Evo platform, and I actually prefer this to my X1 Carbon Gen 8 I use for work. The price ranges from $1,500 to $2,400 for the ready to ship models, but you can always customize your build too.

In our opinion, a superior business 2-in-1 that will get what you need done.