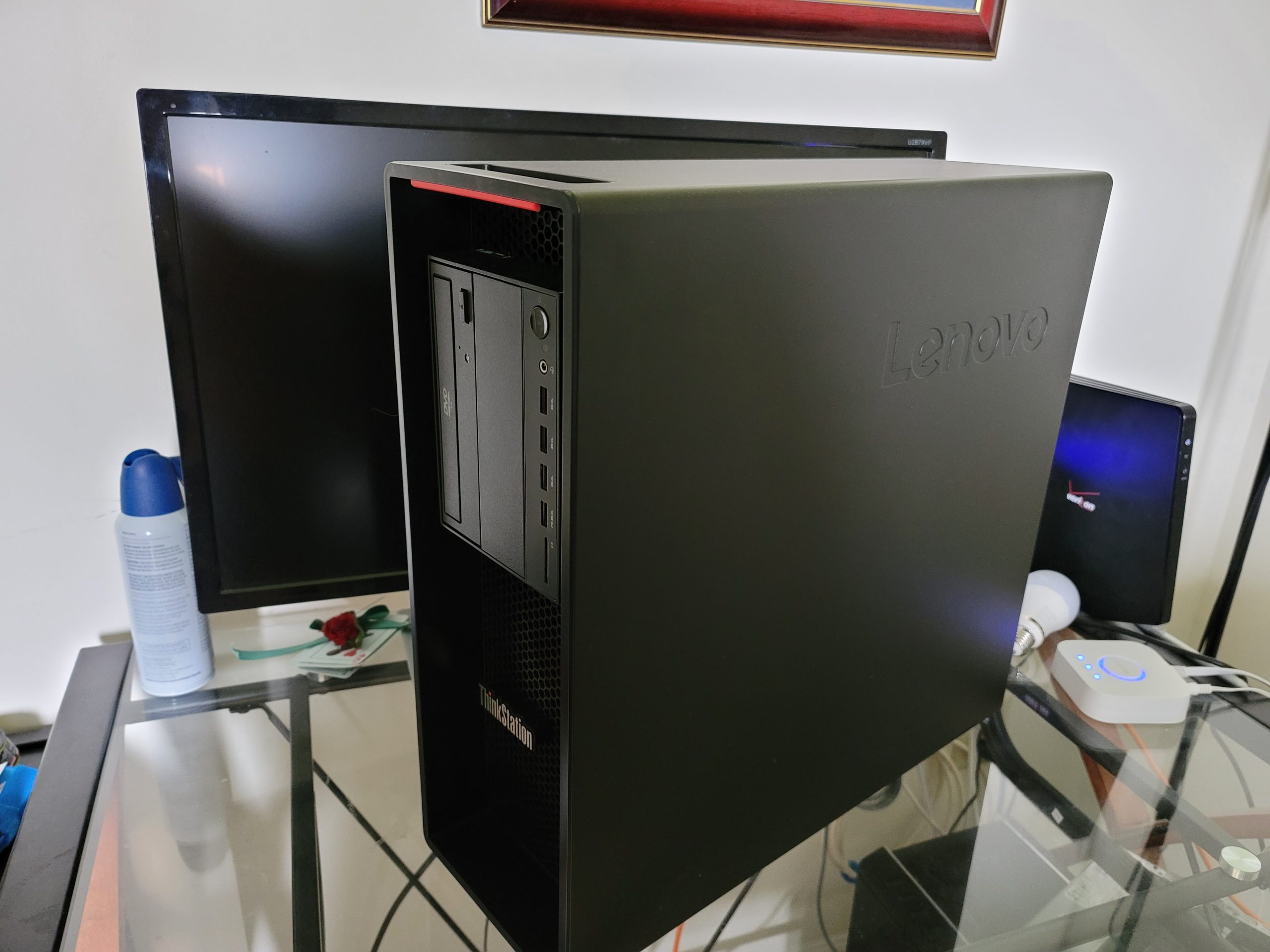 Easily upgradeable and scaleable with a modular design

Need virtual machines in a pinch? The top-end proc has 18 cores to spare

Wifi and Bluetooth are not in the standard configuration

So a while ago we reviewed Lenovo’s ThinkStation P920 with its dual Quardro RTX 8000 cards and Xeon processors. In my book and experience that was pushing server territory, and had the potential price tags to go with it. Today we have the 920’s pared down (and more importantly, lighter to carry) ThinkStation P520 starting at $2,759 at Lenovo. While it doesn’t push the raw power the P920 can with dual Xeon processors, it can still be configured to be a beast. Here’s what we had in our test model, which would run you somewhere in the $4,750 range: The P520 shares a similar chassis with the P920, but a bit more svelte at 6.5″ x 18.0″ x 17.6.” That also comes with a difference at the scales, with this one weighing only about 50lbs based on your configuration. While that’s not super heavy I was very happy to see a built-in handle on this workstation – it takes some of the awkwardness out of carrying these things through small spaces and tight corners, and if you’re like Gimli, son of Gloin, you can carry one in each hand as you’re deadly over short distances.

Outside of convenience and physical dimension, the P520 is absolutely stacked with ports from every angle to serve all of your peripheral needs. Not only is this handy, but based on your particular build, necessary, since WiFi and Bluetooth aren’t standard options for connectivity. Our model had a lone gigabit port on it, but that can be upgraded to either a dual or quad port gigabit set, regardless of your wireless and Bluetooth selections. So in our case, the more ports, the better. On the front we had not only a DVD-RW drive, but 4 lovely LED-lit USB 3.1 Gen 1 Type-A’s, a 9-in-1 media card reader and a headphone jack. On the back are 2 PS/2 ports (yep!) for a mouse and keyboard, 4 more USB 3.1 Gen 1 Type-A’s, 2 USB 2.0 Type-A’s, and 3.5mm audio ins and outs. There is an option for serial port as well if you’re hooking up to devices that connect over RS232.

USB-C / Thunderbolt ports aren’t standard, but can be added on as an option – on the front Lenovo can fit in 2 USB-C/Thunderbolt ports and on the rear there’s an option for one of each. As far as DisplayPort over USB-C, you’ll get those if you upgrade from the P4000 to a higher level Quadro card. The inside of the chassis is nice and open to get hands in and work on, with a lot of the pieces being toolless and modular to make sure you can get to what you need. There are are 4 bays for 2.5″ HDD/SSD’s that can be configured with RAID, as well as optional on-board M.2. If you need more M.2 drives then another option is a Quad AIC M.2 SSD Adapter, which will allow for 4 more M.2 drives up to 2TB each. Want more? Well, there are plenty of USB ports available for external storage!

We expected the Xeon would perform very well, but what we were really interested in was the Quadro P4000. It doesn’t carry NVIDIA’s RTX title, so we expected no ray tracing capabilities – it kind of did, as we were able to see in some of our benchmarks below. 3DMark Time Spy: This test showed that the P4000 is still shy of gaming-focused graphics cards, especially the RTX line, scoring 5,275. This is a short leap from the average gaming laptop score of around 5,700 (which is considered to be an RTX 2060).

3DMark Port Royal: Testing ray tracing gave us a 1,078, which is far below the average gaming laptop which is rated at 3,259 (again, “average gaming” being an RTX 2060). We thought this test wouldn’t run because it doesn’t unless it detects ray tracing ability – so I guess it’s there, just not optimized in any way on the P4000.

Shadow of the Tomb Raider: We tried a few different settings for this one, all on “highest” while fiddling with resolution and shadows. At FHD and ultra shadows we were able to get 69fps. Switching from ultra shadow detail to ultra ray-traced shadows dropped us to 29fps. There is middle ground there that would allow this to be playable with ray tracing on based on this test. at 4K with ultra shadows we didn’t fare so well with an unplayable 6fps. 4K is an option by changing the overall settings down from “highest” to “high.” Final Fantasy XV: Following in the footsteps of our SotTR test, we found this bench went quite smoothly at FHD, scoring “high” with 7,678. Bumping it up to 4K caused us some issues even though the frames that did come through were gorgeous, scoring “slightly low” with 2,242. There is a happy middle ground here on this bench though – testing in the middle at 2560×1440 came back with 5,022 – “fairly high.”

“Smaller” and less graphically intensive games from our Blizzard library and most of Steam ran without a hitch.

Given the gaming benches we’re pretty confident in saying that  for FHD (1920×1080) this is capable of doing most of what you will need – not just gaming but AutoCAD, SolidWorks, and other similar design packages should run for you fine. There’s also the beauty of easy upgradability in a desktop. You can start with a P4000 card but if you want to upgrade to a Quadro RTX or even a GeForce RTX that upgrade path exists.

Lenovo’s ThinkStation P520 Workstation doesn’t have the raw power that the P920 does, but it still is able to get what you need done. The single Xeon processor can still let you use this machine as a small server, but maxing it out will give you an upper limit of 18 cores to play with. That’s still not bad from a single processor. The Quadro P4000 that comes with is a mid-line option on this system, with options starting from a Quadro P620 2GB (the current starter edition at $2,759) going all the way up to an RTX 8000. The fact that it is a nice open case inside makes this machine easily and vastly upgradable, and the modular design makes that very easy to do. It can grow with the user and the user’s needs. It does have a lot of ports but as we mentioned they’re necessary. Bluetooth and wifi should be built into workstations since many accessories are abandoning USB for wireless.

At any rate, it’s a good workstation that does allow for decent storage and can be configured for higher than average performance below $4,000. We definitely like it, but may have been spoiled by it’s mega-beast cousin in the P920.

June 11, 2021
Our Review Process
Latest Reviews
Where to?