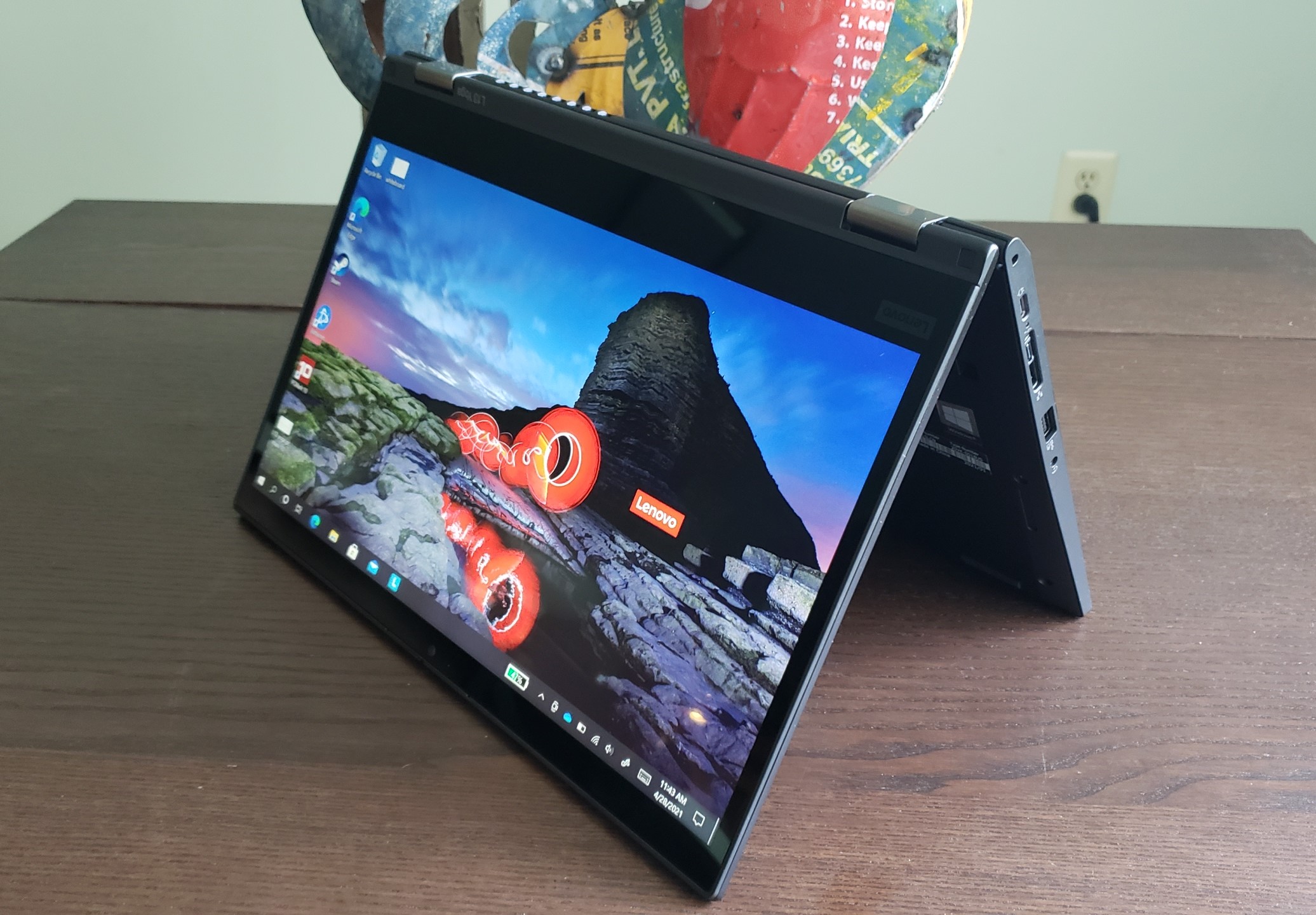 Heavy (well, for a convertible) In the fleet of portable convertibles from Lenovo, we have a Yoga that lives up to its name by literally folding in half. We’re looking at the ThinkPad L13 Yoga today, a unibody convertible with a 360 degree hinge and garaged stylus for pen entry. As it’s part of their “L” line of ThinkPads, it’s aimed to be a bit more budget friendly than its X13 Yoga sibling, but shares the same DNA at a more affordable price. These unibody Yoga systems are a bit thicker than their detatchable Windows tablet cousins, but the added thickness and weight does offer a lot more on ports and connectivity past the now-standard handful of USB-C’s. Here’s the specs of our review model: We’re using the i5 edition (on sale at Lenovo now for $1,182) for our review but this system is available in i3 and i7 editions as well.

The L13 Yoga is a bit heavier than other Lenovo convertibles starting at 3.17lbs but it also comes with the most sturdy and solid build in their 2-in-1 lineup. The top cover is crafted in aluminum, giving it some extra toughness and the extra thickness (at 0.69 inches) allows for a few additional points other systems in its class don’t provide. On the left side is the power-in USB, a USB-C Thunderbolt 4 / side mechanical dock side by side port, an always-on USB 3.1, and the headphone/mic combo jack. On the right is the power button, a microSD card slot, a USB 3.2 Gen 1, full-size HDMI 2.0 port, and as a happy bonus – a completely flush and garaged ThinkPad Pen Pro. With the exception of an RJ45 jack for ethernet, I’m already a big fan with the range of ports with a card slot to boot.

That RJ45 is possible with an adapter, but I’m looking at this and wondering if one couldn’t fit in natively toward the back on one of the sides. The ThinkPad elements are all there, from the red TrackPoint button in the middle of the keyboard to the three red-trimmed hard buttons above the trackpad. A fingerprint scanner is just to the right, and the white-LED backlit keyboard is the same springy ThinkPad keyboard we’ve loved for a long time. There’s a camera embedded in the top of the keyboard deck but don’t worry about a up-facing camera – this is the world facing camera when you flip it over into tablet mode. The main webcam is in the top bezel of the screen with a privacy shutter. The L13 is a ThinkPad, so it opts for a anti-reflective, anti-smudge FHD (1920×1080) 300 nit screen instead of the glossy screens we saw on IdeaPads and non-ThinkPad Yogas. While that’s great for working from anywhere, the 300 nit screen is a little flatter and not as bright as models aimed at media and entertainment with their glossy 2K and 4K IPS screens. The bezels also are somewhat thick, at the top to make room for the webcam and at the bottom for Lenovo branding.

To make the Yoga a Yoga, two large metal hinges let you spin the display from 0 to 360 degrees all the way back into tablet mode, with whatever degree of bend you want in the middle for tent mode, presentation mode, or your standard laptop form factor. To gauge performance we ran the L13 through our battery of tests. For general benchmarking and DirectX 12 benchmarking we ran PCMark 10 and 3DMark. We also test various games while running the formal in-game benchmark for Shadow of the Tomb Raider because, well, it’s fun. Things to remember for the L13 Yoga – though this is running an 11th-gen Intel processor and Intel Iris Xe graphics, this isn’t running on Intel’s Evo platform. PCMark 10, which tests for a modern office workload, came back with a score of 4,544, breaking down into 9,939 for essentials, 5,933 for productivity, and 4,275 for digital content creation. We can immediately see the difference between the Iris Xe integrated graphics as compared to the Intel UHD from the previous generation. 3DMark Time Spy came back with a 1,027 to test DirectX 12, which is better than an average office laptop but still far from the average gaming laptop, which measure in at around 5,000.

As far as testing some other games to play, we were able to smoothly play Diablo III with no choppiness at medium-to-high settings at FHD (1920×1080). World of Warcraft was also playable too, even in the new Shadowlands content. In Ardenweald we were able to have smooth gameplay by lowering the graphics to a “3” at 1600×900 resolution. The Shadow of the Tomb Raider was actually the most surprising test that we ran. We had to tune all of the graphics down and drop the resolution to 1280×720, but we were able to get a very playable 34 fps as the result. That’s a pretty confident number for me for a portable business convertible, especially since the L13 Yoga didn’t have a huge PCMark 10 score bottleneck on digital content creation like other 2-in-1’s may suffer. Here’s the starting line: 60% screen brightness, on wifi, with Windows battery mode in “better battery.” Here’s how it went:

After unplugging John Wick 2 was first up for media streaming through the Vudu video service for about 2 hours. After some work in Power BI crunching SQL queries, the occasional 12-tab web break, furiously typing out documents in Word and tracking my hours in Excel, I flipped it into tablet mode to update my notebooks in OneNote with the included pen. Next up were some remote sessions to fix some virtual servers and workstations and other vague technological things that make up my work followed by relaxing with a variety of YouTube vignettes.

I ended up with a little over 7 hours of battery life before it called it quits. However the L13 Yoga is equipped with quick charging that can be flicked on in Vantage, so if you’re in need of juice you can be back over the 75% mark in about an hour. Great for that 1 hour wait you have in the terminal to fuel you up for most flights since of course you pulled boarding group E.

Lenovo’s ThinkPad L13 Yoga is a durable 2-in-1 that lets you run all of your business apps and communications, and includes a garaged pen when you want it to pull double duty as a tablet. The model here as configured is on sale right now at Lenovo for $1,182 – an i3 version is going for under $1k at $948, and the i7 version will set you back $1,399.

This unit is an L series, which is meant to focus more on value than the X series of ThinkPads. As such we love the price – for most home users the i3 version will get everything done under the $1k mark. After testing the i5 I would even say just go ahead and bump up to the i7 version for only a couple hundred bucks more. The tradeoff will be slightly less battery than the number we got above, but I think the performance bump is worth it. It also comes with a larger hard drive, since for me there will never be a situation where I’d be ok with only 256GB.

I’m a data glutton and I’m not sorry.

These are good for work too, with the ability to go from docked on a desk to 2-in-1 functionality with a garaged pen, turning work from home into work from anywhere – as long as your top specs aren’t feather light and super thin. Me? I prefer the extra weight for metal casing.

May 4, 2021
Our Review Process
Latest Reviews
Where to?