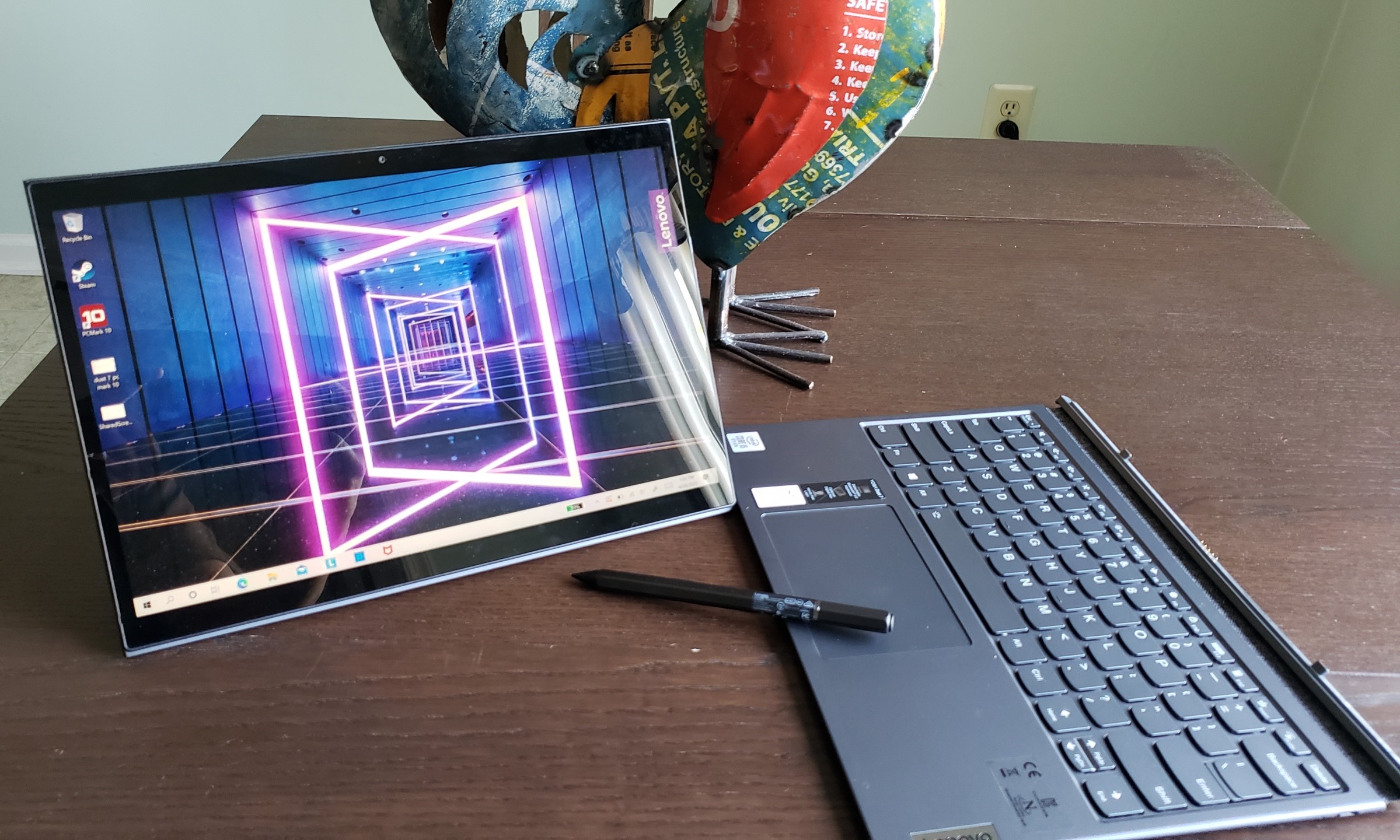 Can work in tablet, kickstand, or laptop mode

No included loop or garage for pen

It’s been a pretty long time since laptops and tablets started merging into the different forms of 2-in 1 have now, but they’re becoming to become far more popular for folks that want to turn work from home into work from anywhere. On my IT pro side I know my clients are far more interested in a multifunction design rather than a “regular” style. And to answer that Lenovo has a lot of convertible options. Today we have Lenovo’s Yoga Duet 7i, built as a Windows tablet with detachable keyboard/case, with a form factor akin to Microsoft’s Surface tablets. We’ll be taking a look at the similarly-designed ThinkPad X12 Detachable sometime this week as well which is more business geared, but the Duet 7i is a good convertible more suited for the home user and enthusiast.

As always before we get into more details, here’s what we’re working with in our model: Like we said up at the top, the form factor is similar to Microsoft’s Surface Windows tablets. The Duet 7i can be a standalone Windows tablet that can be used with touch or pen inputs, with a built-in kickstand to set it on a table or desk for video calls or streaming media. It comes with a detachable folio keyboard that can convert the Duet into a laptop, or be used separately via Bluetooth while that tablet is in kickstand mode. The keyboard itself is fairly sturdy and feels good to type on – like a “real” Bluetooth keyboard with an on/off switch instead of some of the other lightweight type covers that I’ve seen with similar systems. It still has good response when keys are struck and has a white LED backlight as well if you are so inclined. It also has a nice fabric finish so it looks nice when hooked up and closed. The keyboard charges while hooked up via POGO. The screen is a nice glossy IPS panel that makes it great for streaming video and consuming media in general, and the Dolby speakers provide decent sound for entertainment on the go. For video calls or for taking photos and video there is a 5MP IR camera in the front to and a 5MP in the back as well. The tablet on its own is pretty thin and light at 1.76lbs and under half an inch thick, bumping up to 2.56lbs when the keyboard is connected. And at 11.7″ x 8.1″ it’s smaller in dimension than a standard sheet of letter size paper. Since thin and light is the goal, all of the connections are USB-C’s. On the right is a USB-C with always-on charging accompanying the volume rocker and power button, and there are 2 USB-C 3.2 Gen 1’s / DisplayPort’s on the left with a microSD card slot and headphone/mic jack. The Duet 7i comes with Lenovo’s E-Color pen for any writing or sketching input, or even just to use as a mouse. the E-Color pen can be opened at one end to charge on its own when needed via USB-C.

For performance tests we ran it through PCMark 10 for an overall idea, and also ran some tests by means of just trying to play some games on it, including the Shadow of the Tomb Raider graphics benchmark. The PCMark 10 test came back with a score of 2,324, which broke down to 6,007 for essentials, 4,590 for productivity, and 1,236 for digital content creation. We knew this would be the bottleneck to bring down the average since we are running with integrated Intel UHD graphics, so this wasn’t too big of a surprise. As far as gaming, though this definitely is not a gaming machine, we were able to play Diablo III at 1440×900 on low-medium settings without having too much chug or other issues. From this we definitely started to feel the graphical limits of running on Intel UHD. We were also able to get Hearthstone running without too much fuss, for which the touchscreen made it much more fun to play.

For Shadow of the Tomb Raider, our goal was to keep tuning the settings until we got to a playable framerate and unfortunately we couldn’t get there. Even with the resolution turned all the way down and the settings decreased as much as possible we were only able to hit a high of 11 fps – far from what we would consider playable but again this isn’t what it’s tuned for. This is a main difference between Intel UHD and models that ship with the newer Intel Iris Xe integrated graphics platform. But if you don’t game? not really an issue. As far as other tests, the E-color pen really showed a strong performance in any writing/sketching medium I was using. Some Windows tablets with pen input accidentally register your hand as a second pen, and you end up with stray marks and lines all over your canvas in Whiteboard, OneNote, or any other note taking application you’re working with. This felt good to write with, presented close representation to my natural handwriting, and was able to do so picking up variable pressure with no stray marks whatsoever.

And thus begins the real world battery test to see how long this would last me during a regular day of media and productivity. We set the screen brightness to 60%, set the battery mode to “better battery,” and as it goes without saying, ran all network stuff through wifi.

We kicked off the test with pure media consumption, returning to Victorian England with a couple episodes of Downton Abbey. After about two hours of streaming the battery indicator showed I was still north of 75%, which was quite promising. After that was some catching up on my work and TF notebooks using the pen in Microsoft OneNote and then some document creation in the rest of the MS Office suite. I used it for a 30 minute video call on Zoom and for the rest of the time had no less than 10 tabs open on a couple of Chrome and Edge browser screens. After all was said and done, the Duet 7i got me 9.5 hours before calling it quits, and did last me a full day.

The thing that was kind of weird though was the charging. The Duet 7i doesn’t have rapid charging through USB-C like some of its convertible cousins do, but I still had some issues with the variable speed the unit charged up with. It seemed to take a long time for it to charge up from 70% to 90%, and after that it was almost a trickle getting it up past 96%. Under 70% though it seemed to charge at a normal pace for the most part but still had its slow moments.

While many of Lenovo’s new convertibles are coming with 11th generation processors and run on Intel’s Evo platform, the Duet 7i is still a strong contender and a real option for folks that want a convertible at home with some light office work, and is a great alternative for those that were looking at the Microsoft Surface. We were able to get close to the advertised 10 hours worth of battery and with the E-color pen were able to practically use this as a digital notebook for work and entertainment. This particular model is under $1,000 at CDW, Staples, and Office Depot, ranging between $950 and $990, so it’s still a great value pickup for home users and enthusiasts.

May 3, 2021
Our Review Process
Latest Reviews
Where to?