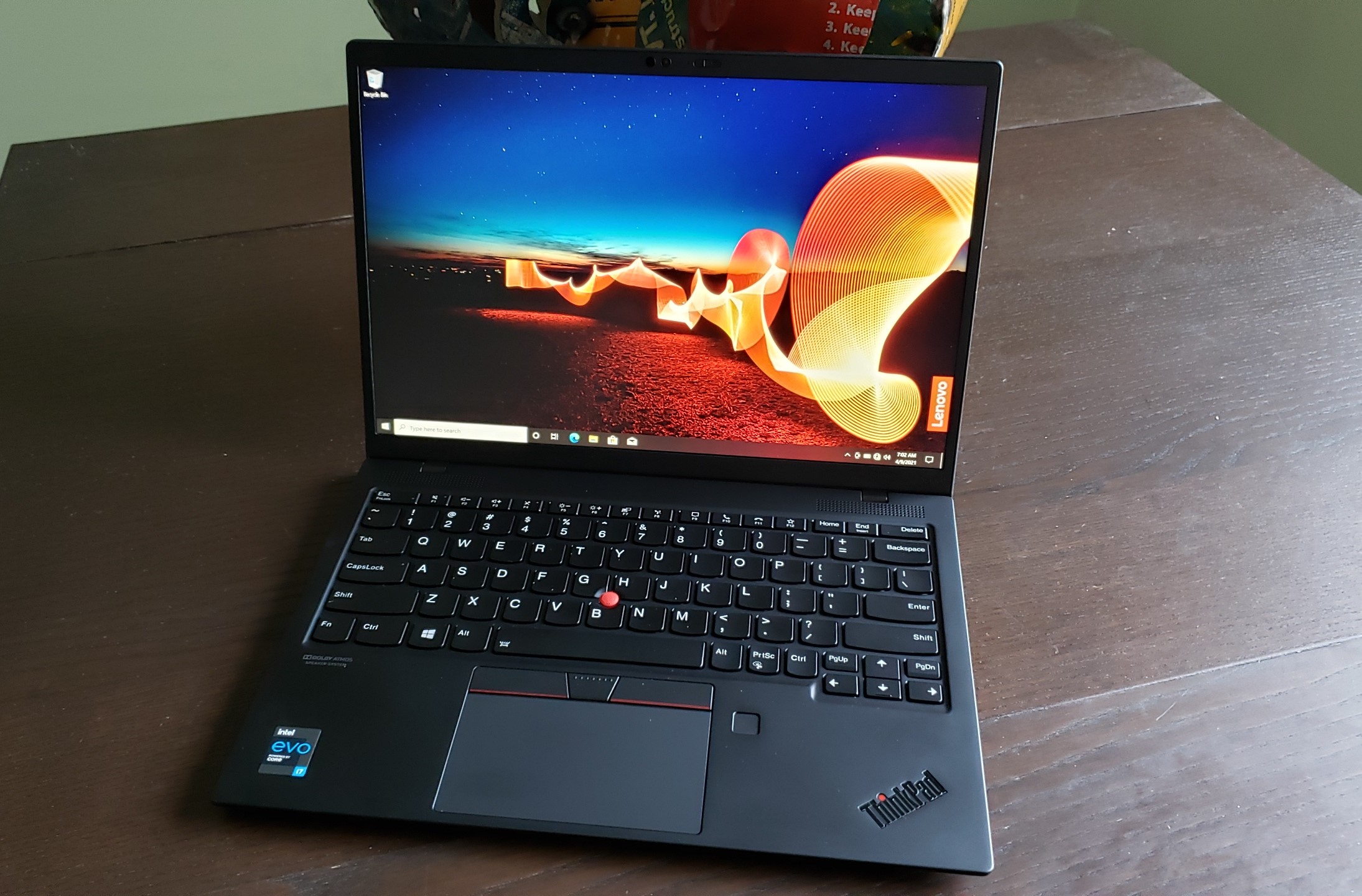 Battery will last all day

Lightness comes at a higher cost

Would have loved a card reader on the left side Starting at just 1.99 lbs and 0.66″ thick, there’s a lot of ThinkPad features packed into its tiny frame as the name suggests. Lenovo managed to take everything about their ThinkPad line and shrink it down to a 13″ chassis for maximum portability. Consistent with the rest of the ThinkPad line, on the deck we have three red-accented hard buttons on the trackpad and the signature red TrackPoint in the middle of the keyboard. The white-backlit keyboard maintains that good ThinkPad response when I struck the keys too. Just underneath, a biometric scanner just to the right of the trackpad for use with Windows Hello. Otherwise we have that smooth, slightly grippy and spill resistant surface we know and love from this line of machines. The 2K screen is available with or without touch, but opting for touch turns this into a mini X1 Carbon with carbon fiber weave in the lid. We have the non-touch model though, so the lid is the traditional black ThinkPad edition. The screen itself is nice and definitely shines bright at 450 nits for its size, but this is a business machine, so it doesn’t come with the glossy finish we would normally see in their home-focused IdeaPad cousins. Also unlike the IdeaPads, many of the newer ThinkPads have returned to the 16:10 form factor. It makes it just a bit taller, but that tiny extra dimension does actually give you about an 11% increase in on-screen real estate. In addition to the space the picture was nice and crisp, so I was a happy camper whether I was working or streaming videos. Just above the screen is a 720p IR webcam with a privacy shutter, and on the left side are 2 USB-C Thunderbolt 4 ports and a headphone/mic combo. The right side is the only spot they could squeeze venting, so the only thing there is the power. With only two ports, I would have loved to see a card reader to be able to plug in a microSD for additional removable storage, especially since they were able to include a headphone/mic port, but of course more parts means more weight, and at 1.99lbs I can barely feel like I’m carrying something around as it is. It’s nice and light, and only slightly bigger than most 10″ tablets as far as footprint. Check the image of the X1 Nano sitting on top of a 14″ X1 Carbon Gen 8 for a size comparison. This easily fits into the secondary sleeve of a computer bag, and was able to even fit inside my leather folder I carry around for work. We started the performance test by running it through PCMark 10 on which it scored a 4,245 – this broke down to 8,665 for essentials, 5,412 for productivity, and 4,104 on digital content creation. Of course the digital content creation is going to be the bottleneck on notebooks without dedicated GPUs, so we can’t really worry about that too much.

It’s still nice and snappy for office tasks like video calls and office software packages. Zoom and Skype are no issue to run while traversing through massive spreadsheets in Excel or writing policy docs in Word. Even large footprint files like Power BI Desktop files are able to run clean without making the system chug as part of a suite of office multitasking. We’ll get into the battery life in a bit but it is impressive, and when you’re low on juice we found the fast charging capability able to get us to 50%+ from next to nothing in about a half hour. These are all products of Lenovo’s new suite of IdeaPads and ThinkPads running on Intel’s Evo platform.

As far as sound goes, the X1 Nano has a Dolby Atmos sound systems with two upward-firing tweeters and two downward-firing woofers that can be fine tuned with the built-in Dolby Access software. The presets here were enough for me on this test, and while you’re not going to blow out eardrums with deep bass hits on a 13″ laptop, streaming was a quality experience, which in this case as you’ll see in the battery test was Westworld, which I love not only for the effects and visuals, but for the soundtrack as well.

What’s always fun is the human presence detection, lighting up the screen whenever I got near the system to be ready to go, and locking when I stepped away. It’s a good security feature too, since I know a lot my my users don’t like locking their systems before they head to lunch or step away for a few minutes. Just for fun I run most laptops through gaming tests – even if this isn’t a gaming machine it’s still a good performance indicator on what it could do. Diablo III ran with no issue at max settings at 2160×1350, and we were even able to get 38 fps out of Shadow of the Tomb Raider at lowest settings at 1280×800. As you can see it doesn’t look the same as it does on some of the Legions we test with ray tracing, but again, it’s not supposed to, so I’m not going to worry about it. It’s playable, which is kind of an impressive stat for the built-in Iris Xe platform on one of the still most graphically demanding PC games on the market. Next we saw how much we could throw at the X1 Nano over the course of a work day with some media consumption and productivity to see how far we could take it. With the laptop unplugged, operating on wifi, the screen at 60% brightness and Windows performance at “better battery,” we started our day. We began on HBO Max, streaming two episodes of Westworld for a couple of hours before we got to work. Work is multiple instances of Chrome open, my GoToAssist remote agent console with 2 to 3 remote desktops open, and taking the occasional break for some media streaming. I even took it onsite to use as my work machine tweaking virtual servers and fixing stuff. I’ll admit, I did feel a little bit hamstrung by only having 2 USB-C ports on the machine, and really would have loved a card reader, but the X1 Nano still performed like a champ throughout the day and then some. After all was said and done, I got 10.5 hours out of it before it went kerplunk, and thanks to fast charging was able to get it almost back up to full in about an hour.

Thankfully Lenovo always has heavy heavy discounts for their online sales, since this level of lightness comes at a cost. The top end X1 Nano right now is $2200 thanks to said sale – which is the model we have here upgraded to a touchscreen and 1TB SSD. As a strong comparison, the 14″ X1 Carbon was made for lightweight portability, and the Nano is still half a pound lighter beyond that. It’s still lighter than Lenovo’s own other lightweight designs like their ThinkPad X13 and the IdeaPad 9i slim we reviewed last week. Under 2lbs also puts it almost a pound below the MacBook Air. This is a great machine for travel or people that want to do things on the go, and you can still dock it on your desk while taking up almost no room at all. Aside from the few tiny gripes I have, the X1 Nano is still a great ultralight traveler.

April 23, 2021
Our Review Process
Latest Reviews
Where to?